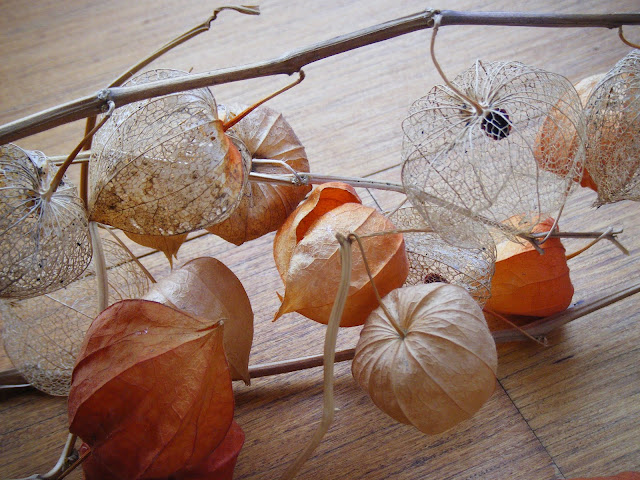 I love this beautiful ornamental plant, Physalis Alkenkegi, whose name is derived from the Greek word for 'bladder'. It is indeed most easily recognized by the seed-bearing structure which is formed by  the enlarged sepals that fuse together to envelope the fruit within a calyx, protecting it from dehydration. Little by little this structure turns a bright orange shade and gradually becomes an intricate lacy, paper-like  husk which gives rise to its popular name the 'Chinese Lantern Plant'. Safely encased within these lanterns is the fruit, eventually freed when the lanterns break apart, releasing the seeds to scatter in the wind - hence the French name for the plant, 'L'Amour en cage'.... Nevertheless Physalis does not solely rely on seed-based reproduction as it is a profilic underground runner, in the same manner as bamboo, so that it can be most invasive in a garden and very hard to eliminate. Its beauty comes at a price!

Physalis is often greatly appreciated for the precious fruit within the lanterns - thus the plant's other name, the 'Winter Cherry'. The fruit, like the tomato, is both rather sweet and sour, and appears as a smaller version of the tomatillo, very popular in Latin America. However caution is required regarding the Physalis fruit as there are 80 varieties of the plant, and not all bear edible fruit. Indeed, even those plants which do yield fruit for cuisine must be treated with care as until fully ripe the fruit is toxic! The Physalis belongs to the same family as Nightshade and so the leaves and unripe fruit contain solanine, a poisonous substance also to be found in green potatoes and the leaves of the tomato plant.
The pâtisserie here in France is often decorated with such a fruit-bearing husk and this adds a finishing touch to cakes that are already works of art in themselves! 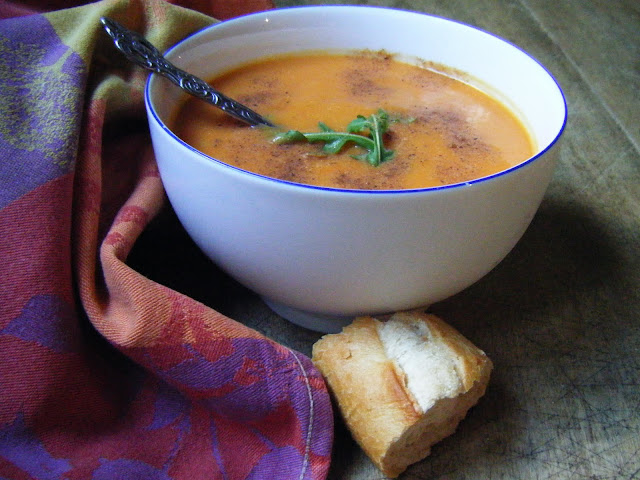 I don't know if it's as a consequence of the strange weather that we've had this year, but I am very pleased to still be able to buy pumpkin on the open street markets. Usually, the season is over until autumn and then, needless to say pumpkins abound, in all shapes and forms..... In France, however, Hallowe'en - with its lanterns and trick-or-treating -does not hold an important place on the calendar of festivities and so the pumpkin is reserved for the kitchen.

Here's my pumpkin soup for dinner, with ground nutmeg and a bit of baguette!


On the market at the moment you can, of course, find many vivid colours - none more so perhaps than the bell peppers in green, red and orange... From the Capsicum family, these were labelled 'peppers' by Christopher Columbus when introducing plants from the New World to Europe, even though in fact they bear little relation to the peppercorn,  from piper nigrium, other than their spicy nature. In fact the bell pepper is, from a botanical point of view, a fruit, but is considered a vegetable in terms of cuisine, and whilst it belongs to the capsicum family, it does not contain the chemical substance present in the chilli, which has such a fiery effect.
The peppers below are going to make up my version of ratatouille. Bon appétit! 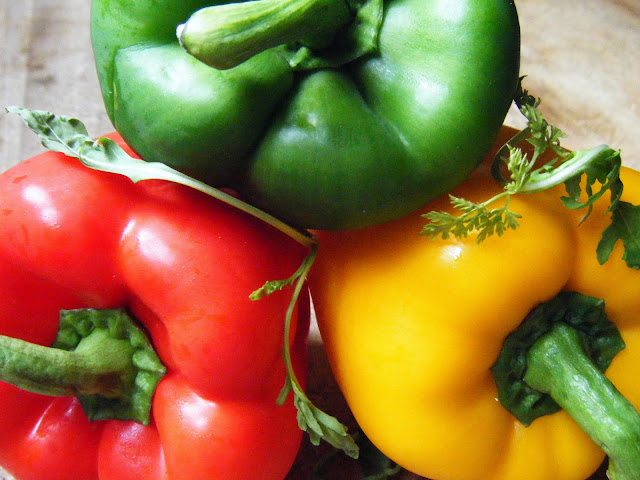