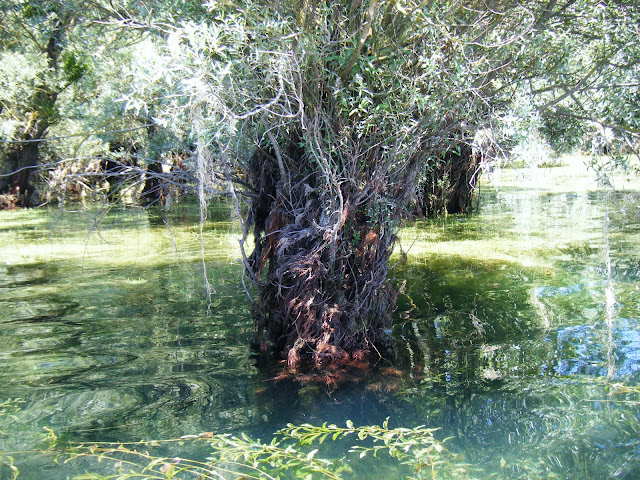 As the weather is very hot and sunny at present, this weekend I went to visit the Lac d'Orient in the Champagne-Ardenne department, situated in North-East France - near the Medieval town of Troyes, and not too far from Reims. 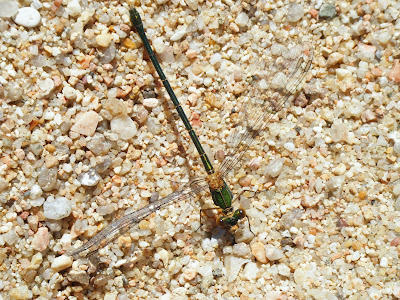 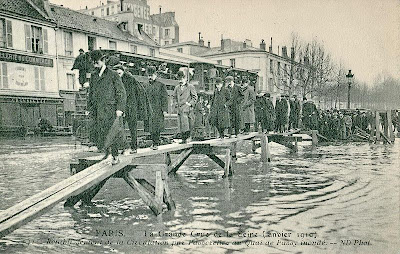 The Lac d'Orient is the third largest artificial lake in France and is a reservoir lake for the river Seine which finds its source at Saint-Seine, near Dijon in the Burgundy region (and therefore relatively close to the Swiss Alps) and then flows on through Paris into the English Channel at Le Havre. The Lac d'Orient is one of four big lakes designed to protect Paris from flooding and was constructed in the 1950's-60's, and finally put into service in 1966. Indeed the capital was, and still is to a lesser degree, vulnerable to the consequences of excessive rises in the water level of the Seine following severe rainfall; the most dramatic flooding taking place in 1910 when Paris was was inundated,and the water level rose to up to 8 metres. Whilst the Seine did not actually burst its banks at that time, as it did in neighbouring towns, heavy winter rainfall rapidly infiltrated the basements of buildings, after having flooded sewers, drains and the tunnels of the Metro system, leading to the evacuation of thousands of Parisians, and a paralysis of the capital's basic infrastructure. 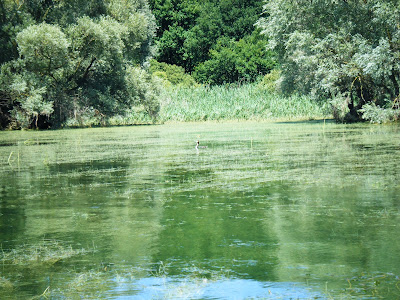 Since that time, high water levels on the Seine and the threat of flooding have been measured on the statue of Le Zouave of the Pont de L'Alma; in 191O the waters reached the statue's shoulders. In the 1930's the people of the Aube region initially rejected plans to create a reservoir to avoid future catastrophes, however in 1949 the dam lac de Pannecière was built in the Morvan on the tributary of the Seine, the river Yonne. Indeed with its water-tight Champagne soil, rendered even more efficient by a layer of clay (argile albien), this region offered ideal conditions for such schemes, despite local alarm at the prospect of submerging a large area of the oak forest of the Aube. Subsequent flooding of the capital in 1951 gave rise to the creation of the first part of a big reservoir lake, originally called the Lac de Lusigny. This name was finally dropped in favour of the today's title Lac d'Orient, derived from the fôret d'Orient owned by the Templiers in the Middle Ages. 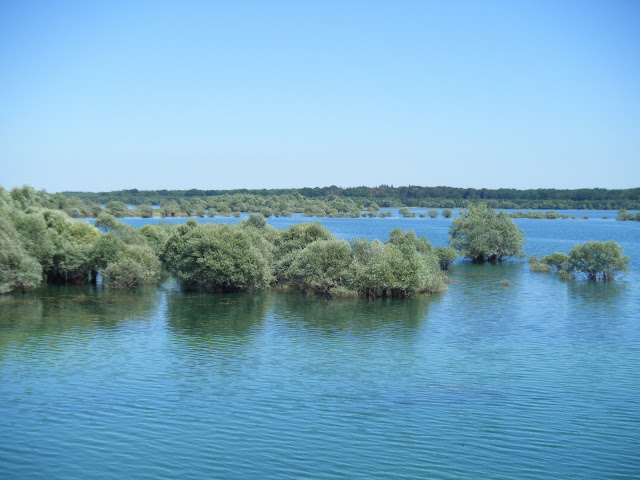 Today the lac d'Orient, like the neighbouring lakes of Amance and Temple, is part of the national parks and is a conservation zone for much flora and fauna. Many different species of birds inhabit the area all year round, while others use the lakes as breeding sites, wintering grounds, and stop-off points during migration. Crested grebes, cranes, herons, moorhens, geese, storks, ducks and swans are just a few of the birds that can be seen - and the nearby Lac du Der-Chante-coq attracts even greater numbers of birds and ornithologists. 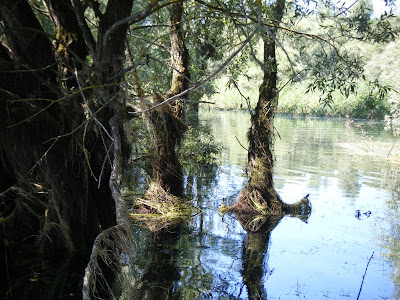 In the same way that the wildlife fluctuates permanently, so too do the conditions in the lake. The Lac d'Orient has a maximum depth of 18.7 metres, but the general water level changes throughout the year. Depending on requirement, water is either taken from the Seine in the process called 'l'ecrêtement des crues' during the 'wet' period of the year - November to June - when the river level is at its highest, or fed into the Seine, with the 'l'étiage' process during the more arid period of July to October to avoid water shortages when the river is at its lowest level and there is a risk of drought. These fluctuations are apparent in the vegetation caught in the branches of the willows leaving traces that remind you of swampland in Louisiana. The lake must look very eery early in the morning, especially in misty conditions; I certainly intend to come back in winter... 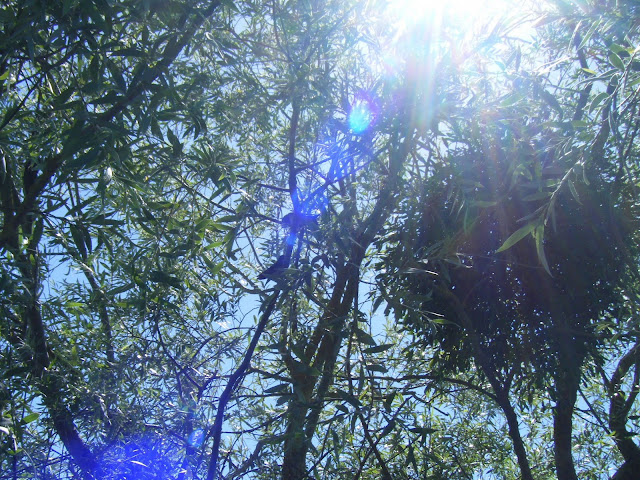 There is however an imposed minimum level which ensures that the lake maintains standards - 'la tranche morte' - necessary to preserve the aquatic plants and wildlife up to the month of November when the reservoir fills up again. Every ten years the lake is drained so that inspection can be performed and vital maintenance work can be carried out. Like many artifical lakes, below the surface of the lac d'Orient lie the vestiges of the old forest land, along with the remains of old dyke works and buildings. 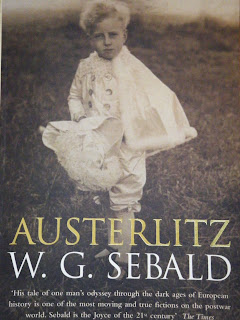 On radiantly sunny days this darker submerged world appears a mere detail, however in winter, with the starker vegetation and greyer skies, this second dimension must feel more imposing. Even in summer, as the swallows swoop and weave their way amongst the branches of the willows on the lake in search of insects these same branches already have great clumps of winter Mistletoe growing on them...reminding us that the seasons will change, another reality is waiting just beyond the bright surface...  This beautiful, yet eery dimension of these hidden worlds remind me of the flooded valleys of Wales, when entire villages were to find themselves at the bottom of similar lakes, like strange shipwrecks complete with chapels, churches & graveyards, and the inhabitants of these communities moved on.  This image of submerged reality, hidden identity and buried memory was one of those that play an evocative role in one of my favourite books - Austerlitz by G.W. Sebald (Penguin Books 2001). Here the author gives a description of the flooding of the Llanwddyn valley in Powys to create the Vyrnwy dam in 1888 that goes far beyond an account of its construction with great slabs of Welsh slate ... and builds passages that I found very moving, having an almost physical effect that was difficult to define.
Strangely enough, on returning home and reading the news I learnt that an online campaign has been set up on Facebook to raise money to buy this same Vyrnwy estate which has just been put up for sale by Severn Trent Water; local people hope to acquire a large share of this in order to preserve its role as a conservational site of outstanding beauty, to ensure public access to its land and to maintain the livelihood of the many who work there. 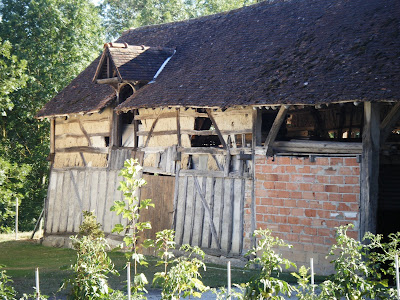 Today the lac d'Orient draws visitors from many parts of France, and the creation of several carefully positioned sandy beaches, sailing ports and aquatic sport facilities & cycle paths has created a tourist site in this lake region which appears to sucessfully offer everything to families and nature-lovers alike. The demands of modern living appear to blend in with the older ways of life in a region which is very picturesque, with its traditional architecture of gnarled wooden barns, ancient tiled roofs and beautiful farmhouses. Well worth a visit! 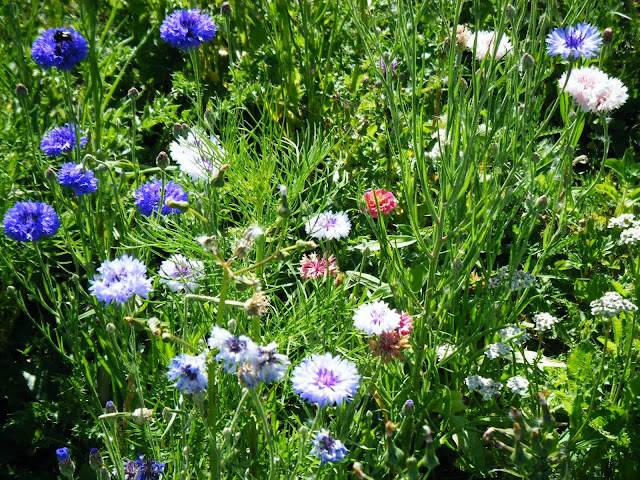 Nevertheless, the other reality of the lake is ever-present as the risk of flood is constant - even in 2003 there was a first-level flood alert in the capital which led to the biggest relocation of artworks (usually kept in underground storage) that Paris had experienced since the Second World War.... although that is difficult to believe when you've just been scorched by the sun!
Posted by Beach-Combing Magpie at Monday, July 19, 2010