I looked up from my bed the other night to see a bright full moon. Nothing special in that, I suppose, but it still catches me each time, along with the idea that millions of other people can see that very same moon. A sensation of naïve surprise each month, in fact. This time it reminded me of a poem I came across the other day, written by the late Australian poet Judith Wright... Full Moon Rhyme.


"Or we will grow wings and fly
up to the star-grassed sky
to hunt you out of the moon"
The hungry dogs of the world
howl at the hare in the moon.

The image of the moon-gazing hare has had a powerful hold on the symbolism of mythology and ancient religions, right up to our modern-day imagination. Over the ages this image has indeed been so widespread that it is to be found around the world, throughout the millenia and while the symbolic meanings may vary, several themes seem to run constant.


In this manner the hare is seen to represent fertility, eternal renewal or immortality. Pliny the Elder stated that  hare flesh could cure sterility and in addition could enhance sexual attraction. In Egyptian belief, hares were intrinsically linked to the moon's cyclical movement - being at once masculine when waxing then feminine when waning. Hares would thus be depicted as alchemists making the elixir of immortality or as messengers of the female moon deity. There were several moon goddesses, the Egyptian Isis is perhaps the best known to us today, but it was the Anglo-Saxon Eostre who was to lend her name to Easter, which is set to coincide with the first full moon after the Spring equinox. For Eostre the hare was sacred, but gradually metamorphosed to become the Easter bunny we find so endearing; the mythical and magical became just plain 'cute'.

The association with the moon was significant as the hare also symbolized purity. It was thought that this creature was hermaphrodite, as its lunar masculine and feminine attributes enabled it to reproduce at prodigious rates without bestial copulation. A single hare was often used to signify Mary's virginity, again associated with the moon as a symbol of purity. This was, of course, in sharp contrast to the common rabbit which was easily recognized to symbolize uncontrollable sin!
Just as the hare's symbols waxed and waned in cyclical fashion  - the common view of this creature did so too.While it would be revered in ancient times the hare was later to be regarded with contempt and suspicion in the period of early Christianity. It was considered to be a shape-shifting creature, serving the interests of witches, ready to tempt men to their perdition through their beguiling animal form. In common folklore of the Dartmoor region a hunter fell victim to the vengeful behaviour of a witch who promptly turned him into a pile of stones (the Bowerman's Nose).
Again the West Country is closely associated with the ancient hare symbol; that of the three hares. This motive is to be found in  many roof 'bosses' in medieval churches of the early 15th century. In these ecclesiastical settings of the Middle Ages the Three Hares represent purity - the Holy Trinity - in a circle. The three hares make up three-part rotational symmetry wherein each hare has but one ear, yet appears to have two.
This was the inspiration for the research of the Three Hares Project, led by Chris Chapman, which endeavours to track down and relate the earliest traces of the hare emblem. Indeed, it soon became apparent that the symbol was far from restricted to a simple European significance or a uniquely Christan meaning.

The same symbol is to be seen in many sites throughout the Middle and Far East, with examples dating back to 6th century AD in Buddhist cave temples in China leading right back to others in Europe - with the Paderborn cathedral in Germany and numerous churches in South West England. In this way the Three Hare symbol is seen in a Christian, Buddhist, Islamic and Jewish contexts. It is believed that these traces followed an ancient trade route bearing from east to west. 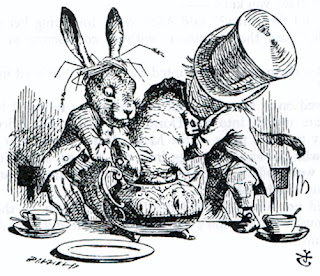 In rather more modern times the hare has continued to exert a fascinating power. Naturally we have the excentricity of Lewis Carroll's Mad March Hare, memorably seated next to the Mad Hatter and the poor narcoleptic dormouse! While in fact it is the females who fight and box the males at the height of their seasonal madness - it is interesting that gazing at the moon was believed to lead to insanity - lunacy (the French adjective lunatique means ever-changing).

The beautiful, enigmatic treasure hunt book Masquerade recently celebrated its thirtieth anniversay. As a teenager, the puzzles were sadly far beyond me but the pictures were so vivid and tantalizing - leading the reader on a mysterious adventure trail with real gold at the end of the horizon with an exquisite piece of  jewellery in the form of a hare.


The purity of the creator's aim, Kit Williams, was sadly tarnished by the greed of unimaginative man showing no dazzling moonlight nor any of the ethereal magic of the natural world, just the blinding fascination and greed for filthy lucre. The 'winner' was said to have cheated...which just goes to show that some instincts are eternal....!!!

However, just a look at the beautiful Masquerade treasure is enough to sweep all that aside and to make you dream - and if all else fails we still have the next full moon to look forward to....This is the Chinese year of the Hare, after all.