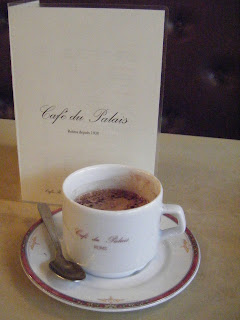 The Café du Palais is virtually an institution in the capital of the Champagne region and heart of champagne production, the city of Reims....
This being the school holidays, I went to the Palais with the children for a hot chocolate - the weather having turned quite a bit cooler. Situated near the Grand Théâtre and just opposite the Palais de Justice, this renowned café counts a mixture of artists, actors and lawyers amongst their regular clients whilst tourists are delighted to discover this unique establishment. The unchanging decor manages to avoid being kitsch although the art and artifacts are most original, unusual, if not just plain weird and are juxtaposed in a manner that highlights the originality of each piece without being vulgar or tasteless. In a similar way younger clients are seated alongside the rather elderly clientèle that seems to flock to the Palais on late Saturday afternoons, the well-heeled share a banquette with people of more modest means and single people find themselves opposite romantically entwined couples or busy families. It is even through all these differing elements that the café finds its harmony. 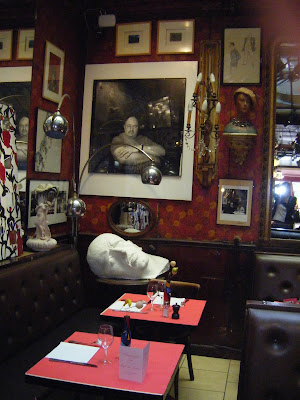 As can be imagined, the Palais is a relatively old establishment which was set up in 1930 in a city that was still recovering from a devastating war that had decimated a huge part of the city, along with 80% of its buildings, and had almost destroyed the cathedral of Notre Dame. From the ashes, rubble and ruin of the First World War ambitious architectural projects arose as Reims embarked on a reconstruction plan that involved some 325 architects and saw the birth of hundreds of new buildings - many in the Art Déco style.
In the 1920's a certain Louis Millet came to Reims from Paris as an aspiring cafetier hoping to run his own establishment. Indeed, Millet was an auvergnat, a descendant of one of the thousands of hard-working natives of the Massif Central region of France who had converged on the capital from the 17th century onwards, gradually developing their trade from initially being water carriers, coal delivery men ('les bougnats') to become wine merchants and cafetiers. 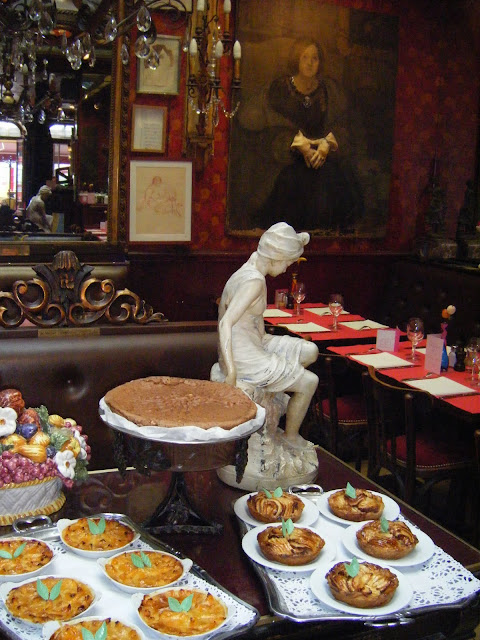 Louis Millet originally set up shop in a modest quartier of the city with a small café which was given the name the 'Tout Va Mieux'. However Louis soon moved to the town centre where trade flourished. When Louis died it was widow Jeanne who took over the running of the café and today it is Jeanne's grandson, Jean-Louis Vogt who runs the family commerce. In today's Café du Palais we see many references to the family's trade history with some of the fittings and furniture that originally came from the first café. The décor is well worth seeing - with its sculptures, paintings and drawings (including one from Chagall), and famous stained glass verrière ceiling from the Belle Epoque. Although this was in fact bought from a nearby jeweller's shop and carefully mounted in the café in the 1990's it seems to find its perfect home in this eclectic setting - so much so that you simply can't imagine it wasn't there from the café's very beginnings. Even the wall paper is of a style that evokes bistrots of times gone by, even more original today when many café owners have totally refurbished and 'relooké' their establishments but in so doing often seem to have lost the character and soul of their cafés.
The Palais, like the majority of the rémois cafés, has a terrace so that in summer the clientèle can enjoy looking at passers-by, or being looked at themselves whilst eating the bistrot cuisine on offer, sipping wine or champagne or simply drinking a hot chocolate, as was our case today! 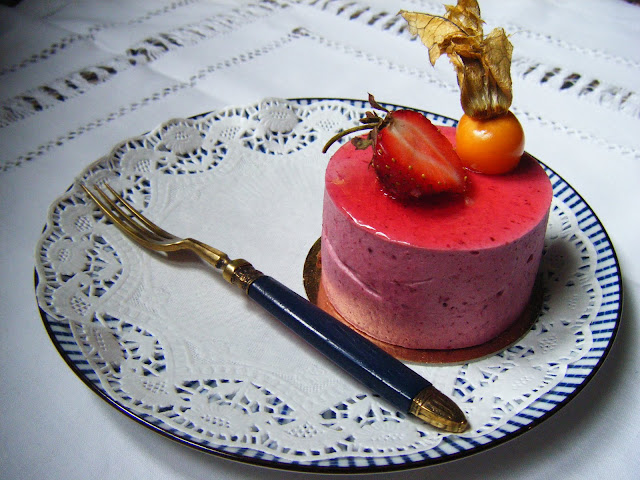 Near my home we have an exellent pâtisserie that offers the most beautiful-looking cakes created by the man who was once the patissier-chef at the Hôtel Crillon in Paris. Here's one example of his oeuvre - called 'Paradis du Fruit'... 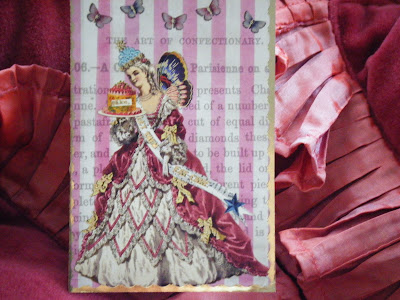 However, as the saying goes, "The proof of the pudding is in the eating" and I am happy to report that this particular piece of paradise was indeed delicious! This led me on to the idea of endeavouring on some more serious pâtisserie sampling, so I shall try again this week, finances permitting, of course!

Perhaps you do need a princess's purse to eat such pâtisserie.......

After our trip to the Palais, we went to the park to see the beautiful flowers there and feed the fish (sorry, just an old baguette!). Here's my little princess... 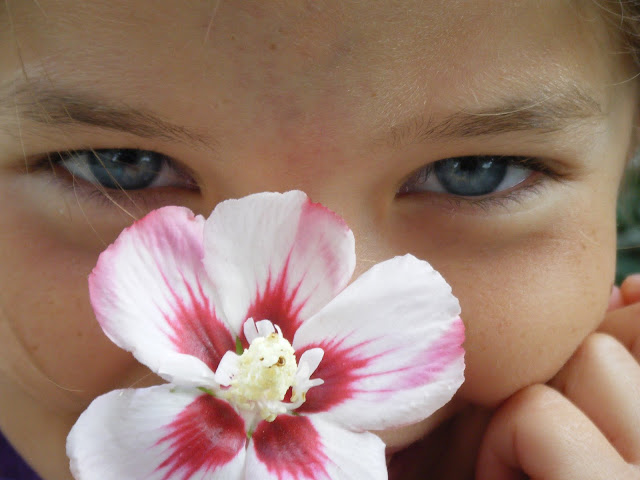