Sometimes we just seem to be scurrying around so much, weighed down by our allotted portion of preoccupations but it would be more sensible to just slow down to put the whole set-up into perspective, although that doesn't always appear possible. We are just a part of a vast entity but we lose sight of that, and do not have the time to appreciate the simple beauty around us.

Listening to the mesmerising music of Kate Bush's Hello Earth takes you away from the haste and hassle of the moment.


The beautiful video above (not always available due to copyright issues) shows the wonder of our planet and then the final line of the lyrics, in German, Tiefer, tiefer, irgendwo in der Tiefe gibt es einLicht that translates as "Deeper, deeper, somewhere in the depth there is a light." help us see through darkness, real or perceived....

This music was partly inspired by the Georgian-style chants that form the soundtrack of Werner Herzog's 1979 film, 'Nosferatu the Vampyre', composed by the West German group Popol Vuh, from the album Brüder des Schattens – Söhne des Lichts ("Brothers of the Shadow - Sons of Light"). This, too, is incredibly haunting. The unique quality of the music, combined with the atmospheric visual impact of certain scenes of the film, make parts of Nosferatu very moving. Okay, probably not the most joyous of experiences, especially the iconic danse macabre scene, but shadows always make you turn towards the light. Anyway, perhaps the message of Nosferatu is that while life is inevitably cut short, whatever its length, it is better to have that existence composed of waves of emotion, sensation, movement and light rather than an eternal non-life of cold isolation, shady statis and exclusion.
We should all be dancing, in fact....

Posted by Beach-Combing Magpie at Wednesday, November 30, 2016 No comments:

Just opposite the romanesque Basse-Œuvre church that is attached to the Saint Pierre cathedral at Beauvais is the Musée de l’Oise (Le MUDO). This museum is housed in the former episcopal palace, the residence of the bishops of Beauvais, counts and peers of the realm, and dates back to the 12th century. It was initially built under the orders of Henri de France, son of King Louis VI ‘Le Gros’, who was Bishop of Beauvais before becoming Archibishop of Reims in 1162. A fortified entrance flanked by two towers was constructed in the 14th century in order to impose the episcopal authority on the unruly inhabitants of Beauvais, who had led a protest riot over the issue of tax increases. The construction work was financed by a fine levied on the bourgeois so it is probably safe to assume that the towers would have been a source of resentment for the people of the town. 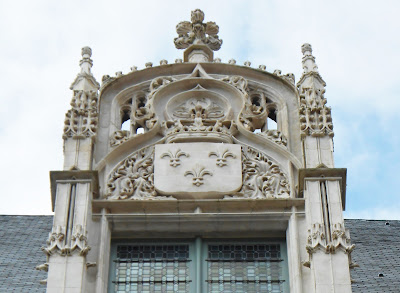 Passing through this impressive porterie today, the visitor enters the enclosure of the palace that ‘Le grand bâtisseur’, Louis de Villiers, restored in the 16th century. The ornate gardens set off the elegance of the main building which combined flamboyant gothic and Renaissance features to great effect. 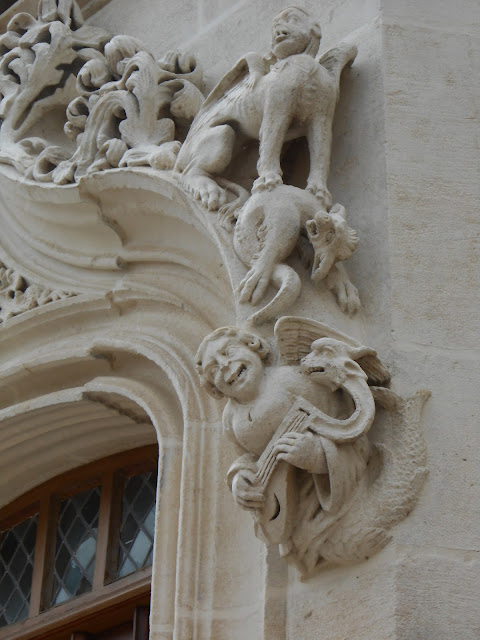 Although I did visit the museum’s art collection, it was in fact, part of the mural decorations in the original 14th century towers that caught my attention far more than some of those stodgy early-19th century Neoclassical paintings. Within one of the fortified towers, with its fairy-tale pointed slate roof is a discrete treasure - four ephemeral mermaid figures that seem to float above us on the vaulted ceiling. This fresco with its enigmatic vision of feminity offered my eyes a welcome respite from some of those hefty, heaving female forms of the MUDO collection. 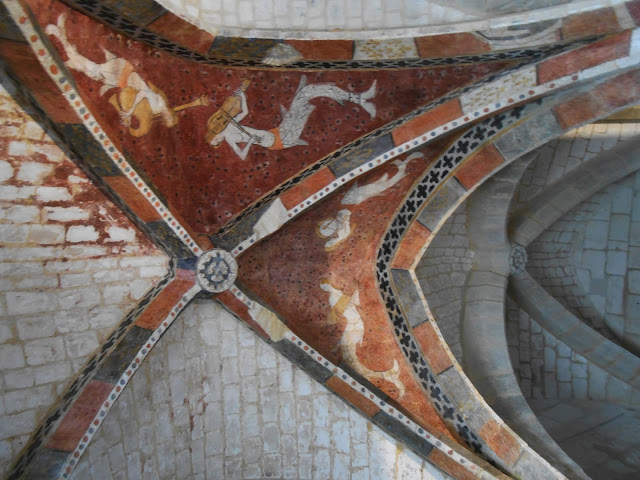 This ceiling painting probably dates back to 1310-1320, shortly after the construction of the entrance. The function of the rooms within the towers is not clear. The presence of latrines and fireplaces indicates that they were inhabited, and it is assumed that some members of the bishop’s household occupied these spaces, rather than the main body of the palace itself. Were they used by members of the clergy or by the wealthy, prestigious family of the bishop, Simon de Clermont de Nesle? The nature of the intended audience would generally affect how the mermaids were to be interpreted; the simple presence of these fishy females was always significant. 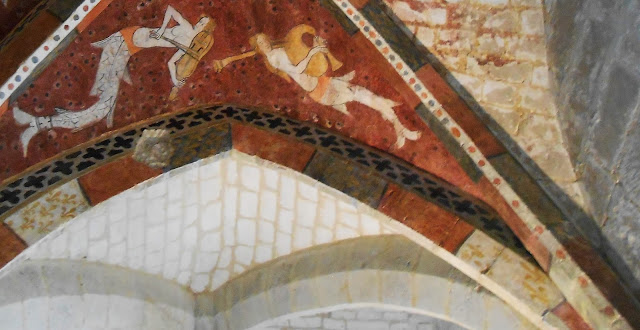 Our modern-day image of the mermaid is that of a magical symbol of beauty, peace, light and grace, often associated with rainbows, unicorns and the like. However, these mythological hybrids have a far murkier reputation and legends abound of their sinister practices in cultures around the world. In the epic poem Odyssey, Homer’s malefic mermaids lured sailors onto the rocks with their bewitching siren songs, driving the unsuspecting males to their death. For Ovid, the sirens were the companions of the young Persephone who was destined to be the Queen of the Underworld. It was Demeter, her mother, who had given the sirens wings in order to search for her daughter who had been abducted by Hades. By the Middle Ages, mermaids had largely lost their wings, but had kept their symbolic fish tail and their wicked ways. The mermaid became symbolic of the lascivious female in general, flaunting her feminine charms to ensnare any man foolish enough to fall prey to her attributes. Most mermaid figures were shown playing musical instruments, as is the case here in Beauvais, and often carry a mirror and comb with which to preen themselves. The tempting yet treacherous nature of the mermaid had already been documented in the Bestiaire d’Amour of Richard de Fournival, dating back to the mid 13th century.

Were these Beauvais sirens intended to warn the unsuspecting abstinent clergy of the dangers of the flesh, from a moral, God-fearing point of view ? Or, on the contrary, were they supposed to titillate the senses and satisfy aesthetic tastes of the profane red-blooded male? Many private chapels of the period were decorated with musical angels, that partly reflected the custom for chivalry and courtoisie with grand musical celebrations. Perhaps the image of mermaid musicians was used as a mischievous take on the musicians – les ménestrels - of the time? Certainly, the Middle Ages saw a fascination with many hybrid creatures and shape-shifters that embodied the ambigious, scandalous or sinful aspects of life itself. Many of these beasts would appear as marginalia, that is to say, figures decorating the borders of the main body of illuminated texts. These ornate manuscripts served the same role as stained-glass windows – informing a largely illiterate public through visual representation – and these marginalia underlined their central message. 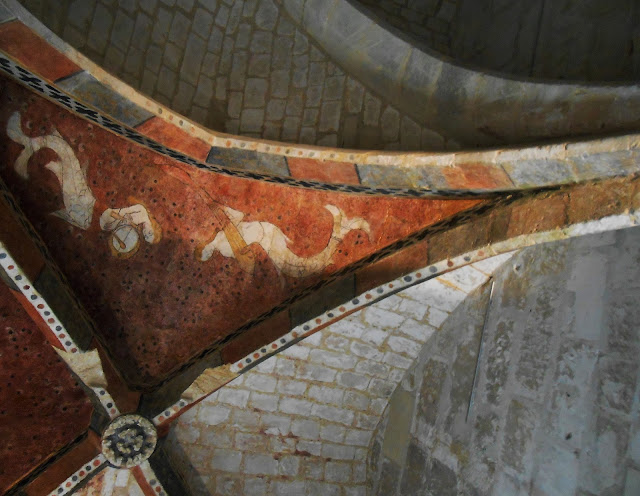 In the tower, however, the mermaids do not occupy a marginal position, but rather a key one as they float around the intersection of the rib-vault ceiling. They seem to be the main focus of the artist rather than a quirky after-thought, unlike the usual drôleries (grotesques). Furthermore, these mermaids do not appear to be particularly ill-intentioned, even if they do have the long golden hair, voluptuous nude forms and long scaly, swishing tails of their evil sisters.

Today, the room itself seems rather sober, which seems to makes the ceiling glow all the more. The bold ochre and terracotta colours are set next to slate-grey and the strange dotted decorations along the ribs and background seem to bring out the the curved, pale bodies of the mermaids themselves. Applied a secco on the stone itself, the painting has survived the centuries, unlike the rest of the original paint work in the room. Indeed, restoration work in 2013 revealed traces of decoration on the walls and around the windows that indicate that the room must have been as bright and eye-catching as the ceiling and would have created a very different impression to the one today.

The musical instruments that the sirènes hold lead us to further questions. One mermaid plays a large cornemuse, a French equivalent of the bagpipes, whilst another holds a viol, a violin-shaped instrument. A third musician plays a galoubet or flûte de tambourin, which is a three-hole pipe wind instrument, intended to be played in one hand whilst the other beats a snare drum – the 'tabor' –from the French word for drum; tambour. Finally, a fourth mermaid holds onto the elongated form of a trompette marine, appropriate in the context, one would think. However, the name is misleading since this instrument is neither related to the sea nor the brass family.

This is in fact a bowed string instrument, producing the sound of a trumpet so that it was often used in convents instead of actual trumpets which were generally played by men alone. Instead of any association with wanton female seduction, the marine trumpet appears to have been closely linked to the culte marial, the Catholic devotion to the Virgin Mary. Marine was itself a deformation of the adjective marial ; in German, the instrument is known as the marientrompete or the nonnengeige – the nuns’ fiddle. Originally a monocorde instrument whose string was plucked, as in the painting here, later the marine trumpet had several strings played with a bow.

So all in all, these four mermaids continue to taunt their viewers, though not in the same manner as they originally did. We may not be sensitive to their particular powers of seduction today in the same way as our ancestors and certainly do not need to be warned of the dangers of the flesh but these mysterious figures still fascinate us. The simple fact that they have survived all these centuries makes their beauty all the more remarkable and humbling.

Posted by Beach-Combing Magpie at Thursday, November 10, 2016 No comments: 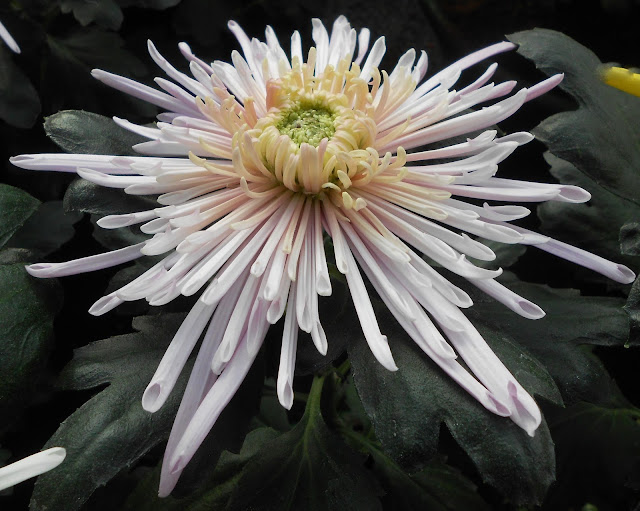 In many parts of the world, the first of November marks All Saints' Day. To remember those no longer here at La Toussaint, here in France it is customary to mark their passing with pots of elaborate chrysanthemum flowers. These seem to me to be a perfect celebration of Life, although the association with Death itself means that many French consider the chrysanthemum to have morbid connotations. Such beautiful flowers just fill me with joy, even more so since the weather is generally cold at this time of year and the evenings have drawn in. They are simply bursts of light and warmth. 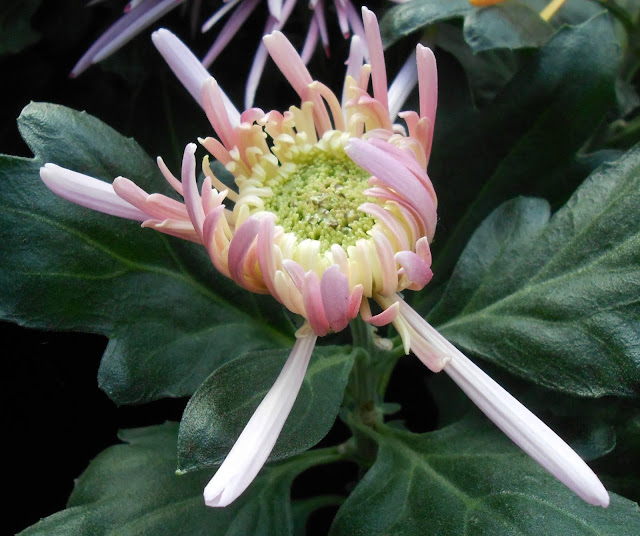 Whilst considering the subject of Life and Death, here is the poem Joy And Sorrow by Gibran Khalil Gibran. 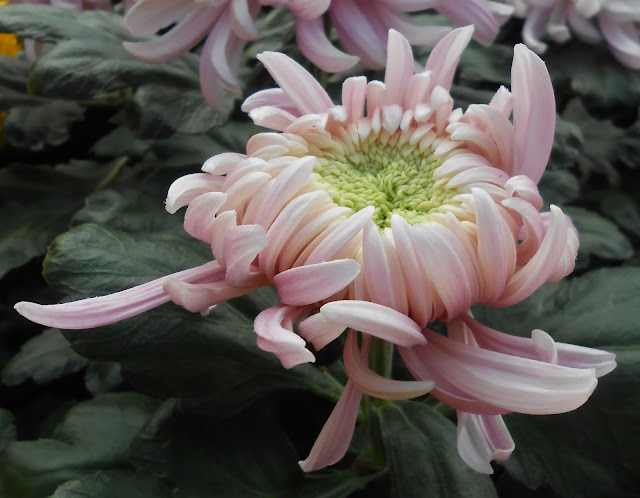 Then a woman said, "Speak to us of Joy and Sorrow."
And he answered:
Your joy is your sorrow unmasked.
And the selfsame well from which your laughter rises was oftentimes filled with your tears.
And how else can it be? 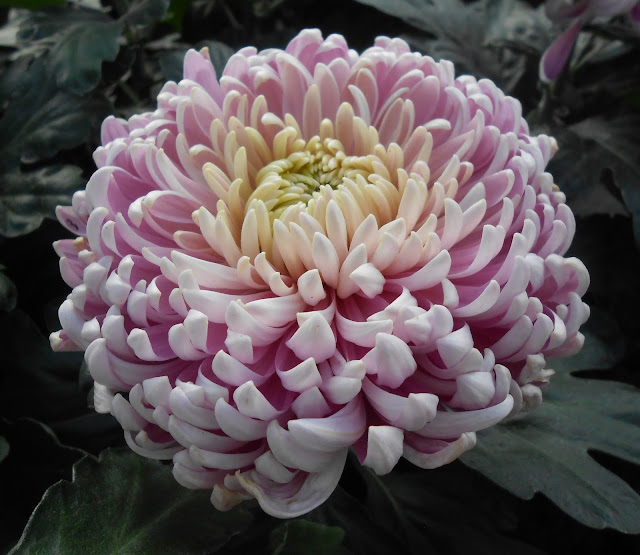 The deeper that sorrow carves into your being, the more joy you can contain.
Is not the cup that hold your wine the very cup that was burned in the potter's oven?
And is not the lute that soothes your spirit, the very wood that was hollowed with knives? 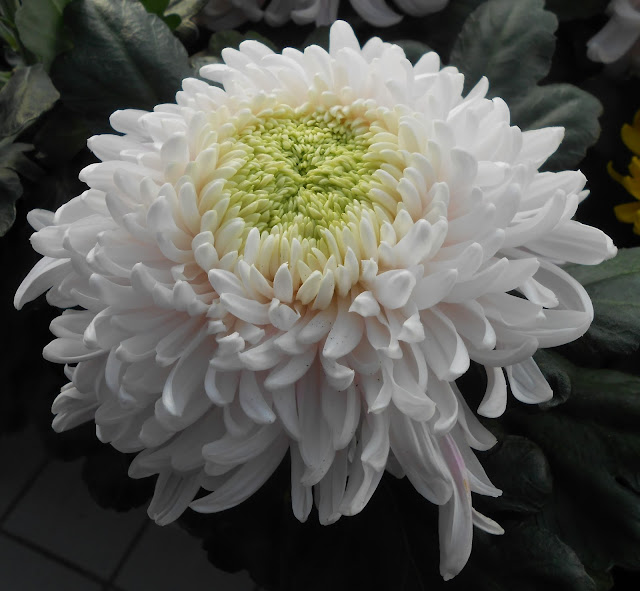 When you are joyous, look deep into your heart and you shall find it is only that which has given you sorrow that is giving you joy. 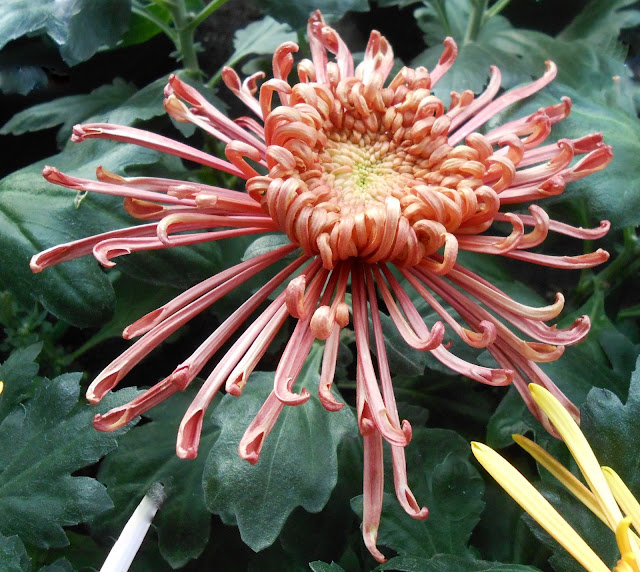 When you are sorrowful look again in your heart, and you shall see that in truth you are weeping for that which has been your delight. 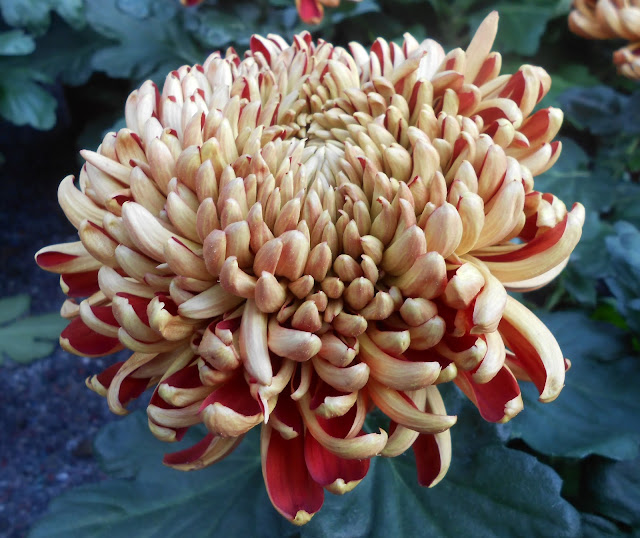 Some of you say, "Joy is greater than sorrow," and others say, "Nay, sorrow is the greater."
But I say unto you, they are inseparable.
Together they come, and when one sits alone with you at your board, remember that the other is asleep upon your bed. 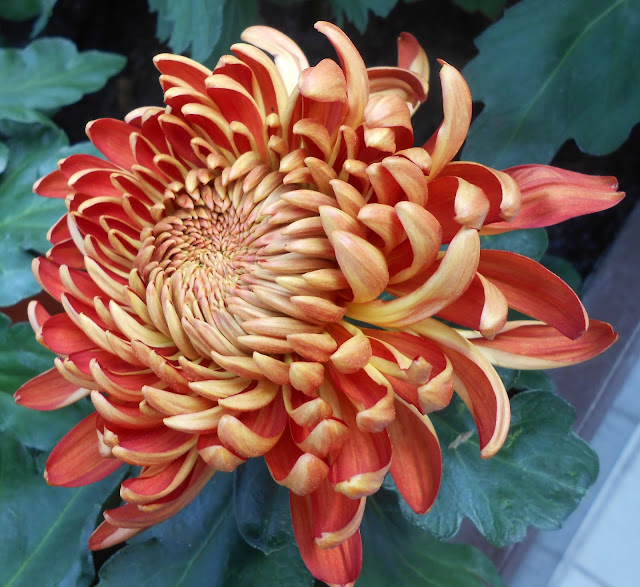 Verily you are suspended like scales between your sorrow and your joy.
Only when you are empty are you at standstill and balanced. 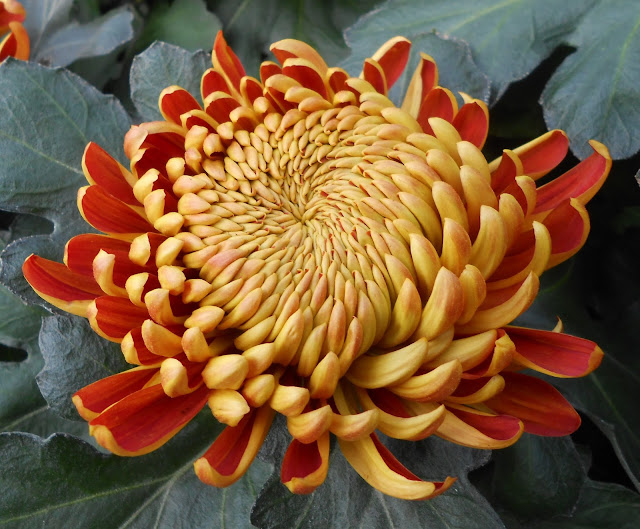 When the treasure-keeper lifts you to weigh his gold and his silver, needs must your joy or your sorrow rise or fall. 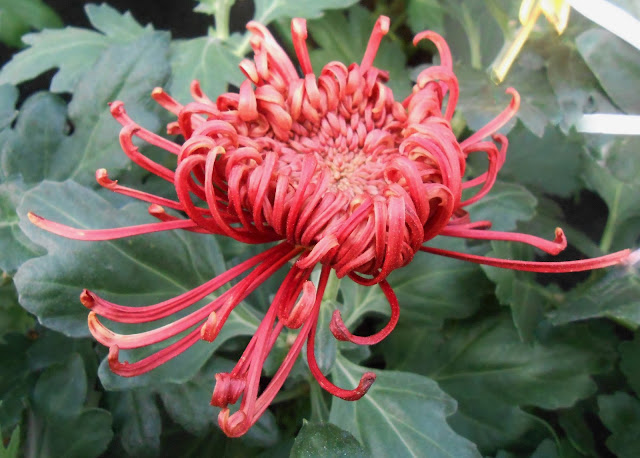 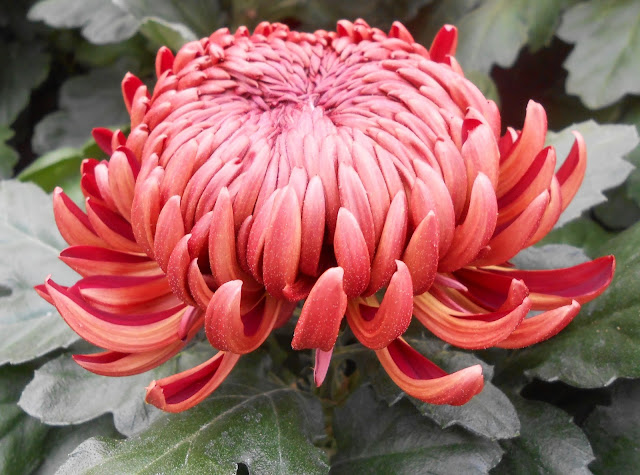