A few years ago my aunt gave me the unusual  framed picture below, which made me think a little of a watered-down, asexual version of an Aubry Beardsley drawing, with its fine stark black lines and an enigmatic figure dancing in the moonlight in an eery wood. 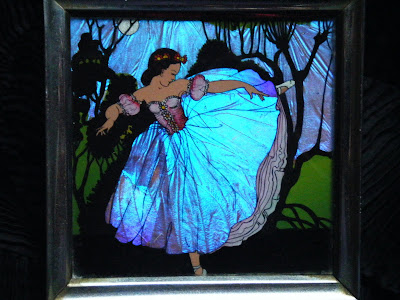 What particularly caught my eye, however, was the shimmering background of the picture, along with the iridescent clothing which changed at every angle from pale blue to lilac and was, of course, due to the use of butterfly wings to create this very effect. In fact, this little picture is just one of many butterfly-wing ornaments, souvenirs and pieces of jewellery which were highly fashionable from the 1920's to around the 1950's, and which have now become popular collectibles. Indeed, brooches, bracelets, earrings, pendants, decorative trays and pictures were churned out in the United Kingdom from the mid-1920's, and the heart of this production was in the long-established Jewellery Quarter of Birmingham. 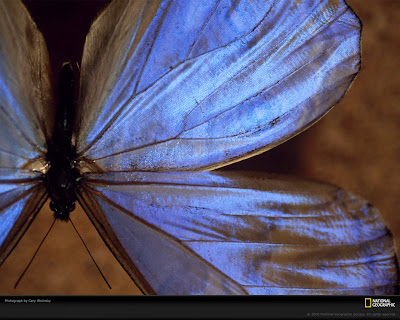 In 1922, the Shipton company applied for a patent on this specific reverse painting - the technique generally used in butterfly-wing art - however it was the firm of Thomas L Mott (founded in 1875) which caused the surge in enthusiasm for this, following at exhibition of their work at the British Empire Exhibition in 1924. Subsequently the firm of Thomas Mott acquired the other manufacturers -  Henry W King in 1925 and then Owen Brothers in 1933. It was in the Thomas Mott company that my aunt worked shortly some sixty years ago....
Working as one of the team of painters, applying the reverse images to the glass that would cover and seal the final piece, be that a piece of jewellery or a painting as in this case, my aunt would have to use a steady hand to carry out this intricate work. Apparently the conditions were fairly archaic, and represented a significant fire-hazard, but there was a very good working atmosphere, with fellow painters coming from all different backgrounds, chatting together on their tables, which ran the length of the room.
The images that were recreated were often either 'exotic', with sunsets, landscapes & seaside horizons, or romantic and 'other-worldly'. I have to say I prefer the latter type....
These dreamy images remind me of the silhouette drawings and pop-up work that used to attract me when I was younger - the work of Jan Pienkowski.
Here is his 'Magic Castle'....but you can see much more on this link: http://www.janpienkowski.com/home.htm 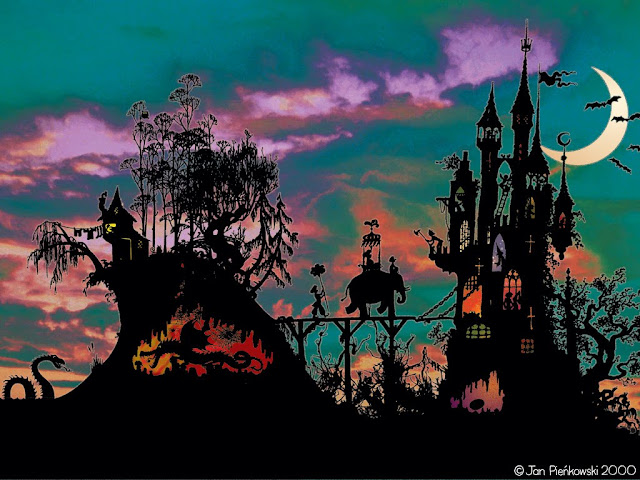 The butterfly wing used for the art work was in general that of the South and Central American (male) butterfly; the Morpho. This huge beautiful creature flutters around the forest vegatation and humidity, and I had the great pleasure of seeing some flying in an Ecuadorian jungle some years ago. Truly magical!
While their irridescent blue mesmerises us, the Morpho's wings offer it camouflage against predators which find it difficult to distinguish from the blue sky above whilst the brown colouring of the underside resembles mere decayed folliage of the undergrowth.
In fact this blinding blue is not pigmentation, but an optical phenomenon wherein the miniscule scales, or 'lamellae', that make up the surface of the wing reflect light repeatedly at different levels. Apparently nanotechnology is currently perfecting techniques whereby the iridescence of the butterfly wing will be artiificially replicated in order to encrypt information on bank notes...
At the height of the craze for butterfly-wing art the commercial desire for the Morpho was such that to satisfy demand butterfly breeding schemes were set up in Europe...  A cheap alternative was simply to use coloured foil as false wings for a background material (think Quality Street wrappers!), but without the irridescence of the Morpho the art lacks its bejewelled quality, the lustre and magic. 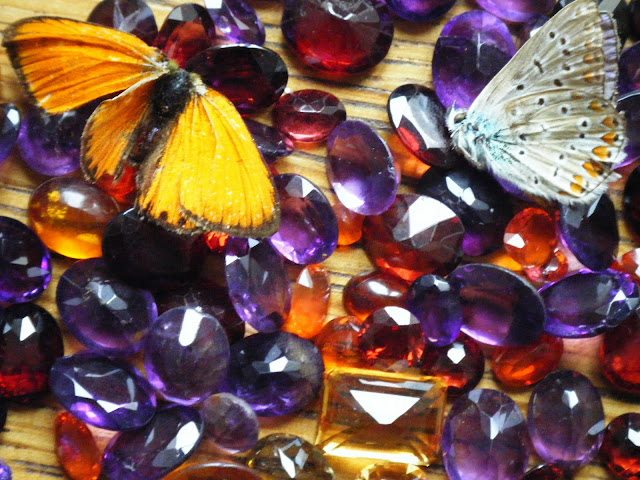 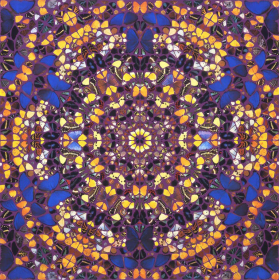 The other day I came across the truly beautiful butterfly work of Damien Hirst, an artist I have never felt any particular enthuisiasm for. However anyone who can admire the magnificence of these butterflies and then create such works must have some vision. The resulting work is almost religious, or certainly spiritual, as are the titles - 'Amazing Revelations'; 'Bringing Forth the Fruits of Righteousness from Darkness'.... Just as the Morpho and other butterflies mimic the structures of the world around them, these butterfly works mimic stained glass windows and intricate Arab geometric mosaics. The sour taste to these great works is the fact that countless butterflies of many, many species were used and I'm not sure these were collected in a manner appropriate for a time when we are gradually becoming aware of the fragility of the insect world.
Posted by Beach-Combing Magpie at Tuesday, July 27, 2010