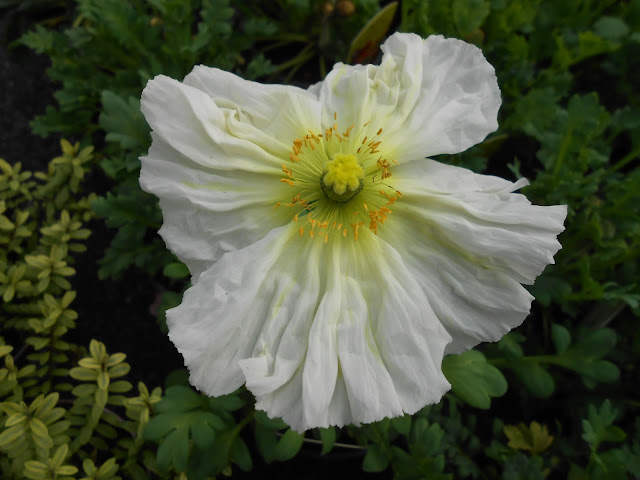 After my ranting and raving of the earlier post, and before the end of this month in a couple of hours, I'll blank out the last few weeks with some beautiful shades of white and whitewash over all the dingy stuff of late. 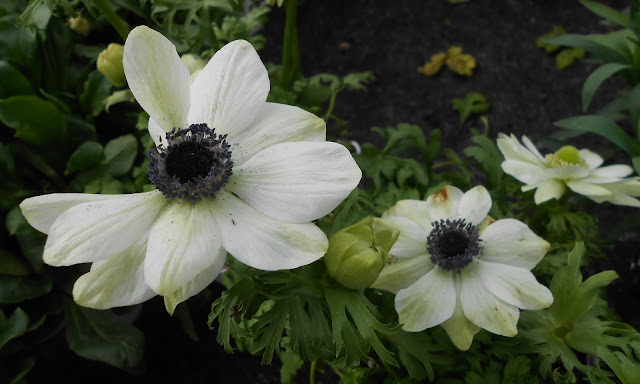 Here are some of the flowers from the garden centre, while I wait for all the colours to come out on my balcony.... Namely the anemones that I planted at the New Year and the snake's head fritillary from the previous spring. Actually, I nearly washed out the grey in the canal yesterday evening. Literally... As I was rowing along in the scull, 'my' musk rat emerged from the bank and began swimming along behind me. Magical, as was the evening bird song and the peaceful atmosphere on the water. I was so eager to get a good look at it all that I momentarily lost balance! 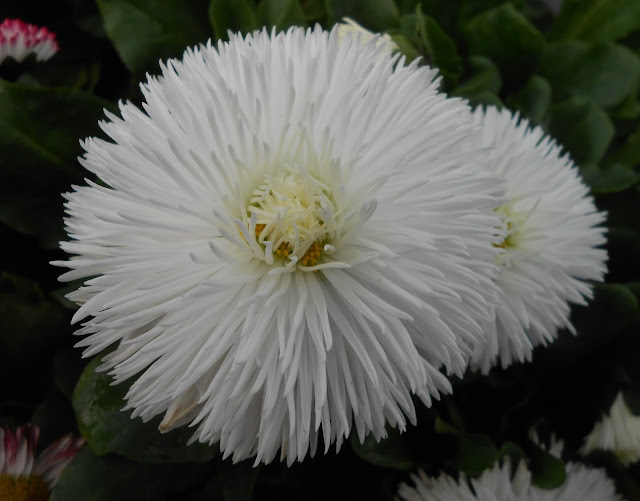 Posted by Beach-Combing Magpie at Thursday, March 31, 2016 No comments:


I wonder if we are, collectively, letting our children down? The received idea is that you're supposed to give them (access to) things that you never had. In many ways, very generally speaking, that seems to have been achieved in most Western households. Many of the objects and gadgets that have become mainstream over the last ten years and are now mainstays to the majority of kids' routines today, would not even have been part of the farthest stretches of my imagination as a child -  just as Man's landing on the moon would have been utterly inconceivable to the generation just before mine... It probably goes without saying that most of these present-day staples in a 'normal' existence are based on electronic technology and usually present themselves in the form of one screen or another, ever enhanced with a myriad of network, apps and so on. Looking at the wide range of 'stuff' available to children and teenagers alike, I wonder what I would have thought of such things at that same age, and how amazed I would have been if I'd had a glimpse of what would be commonplace to my children...

But for all this wealth of digitally-enhanced information, communication, education and entertainment, strangely enough, I envy this modern take on childhood and youth less and less as things progress. This array of fast, efficient devices that have streamlined lives and lifestyles to perfection does not seem to have actually delivered the perfect, dazzling life that it may suggest. The endless talk of opportunity and openings promised to the young by the digital era seems to gloss over what is being shut off in the process. The possibility to surf over those enticing, shiny, slippery surfaces of the internet provides so much, but has rendered so much else rough, dull and seemingly redundant in comparision. Little by little, a whole host of other, older objects and activities have come to seem clunky, shabby and senseless next to this mesmerizing modernity. But for all its magic, this modern wizardry isn't truly conjuring up anything enduring. It seems to leave many of its younger users spellbound by its illusory depths and wealth which are not, in fact, that enchanting. It seems to be blinkering off so much of children's vision, extinguishing so many sparks to their imagination and snuffing out chunks of their creativity and curiosity that children are born with.

Our days might be getting busier and ever richer with vast ranges of options, but our existence is getting weighed-down with light-weight noise and visuals that impoverish us in many ways. These endless choices have a tyrannical hold over us all and we are forever tempted to click ever beyond in the search of something that is ever elusive. These incessant processes dictate our moves. Why do we burn to check a message just received, and why would this urge to consult some screen be more compelling than the desire to maintain, uninterupted, the conversation or activity already taking place? Has the state of the remote and/or virtual gained more weight and 'reality' in our lives than what is actually real? There is surely a price to pay for this clicking and checking. When you can click on and off endlessly, there is little demand on your attention span. You move on freely, with or without reason, in an activity that never taxes patience or requires sustained effort. We want instant gratification and our devices promise the never-ending means to search other means for this. Here we have a game of mirrors to ensnare we skylarks and turn us into bird-brains. Perhaps part of the beauty, and most of the challenges, of Life itself are based on the now-devalued art of perseverance or the ability to tolerate plain tedium. What will our cultural, social and personal landscape be like, once vast numbers of public libraries have disappeared, handicrafts and manual skills have become quaint activities of the former generations, perceived as sadly lacking our glorious technology, and when all contact with the outdoors has become standardised and sanitised? All of this has simply provided a brilliant coating that can soon be scratched, just like the supposedly indestructable CDs that sneeringly replaced the laughably old-fashioned audio cassettes and vinyl records. Yet little is left once that sleek sophistication has been chipped or scraped - the illusion is broken and nothing can hide the fact that there's little left below the surface - like ultra-white veneers bonded onto neglected teeth beneath. An extensive, sustained powercut would leave us deprived of this technological tat  - revealing the true extent of our dependancy to it and the void it has actually created in our social and creative approach to our world and our very identity therein.

Furthermore, the ironic thing with the old clumsy 'stuff' we used to have - the sellotaped audio and VHS cassettes, battered and beaten books and scratched and warped records - still worked when no longer brand-new, Just try coaxing a bit of life out of a damaged DVD, CD or USB key. Have fun! In addition, the jolts, bangs, faults and short-comings of the now extinct species were part of their very charm and are woven into our memory of the experience of reading/listening/watching. And since, most of the time these were are hard to come by, due to limited finances and accessibility, they seemed special - objects of value. Today we really have become spoilt for choice, but we are spoiling our children's lives with this. We want the best for them, but why is this whole area so blurred that we cannot see what we're giving them? Is that all we ever wanted for them?

I have grown increasingly tired of 'teaching' (trying to teach) young adults who are continually drawn to and ever distracted by their 'smart' phone.... Dumb, damn phones. The dimmed down, device-drugged expressions as they are forced to respond to my intrusive physical presence whilst itching to get back to the latest message, selfie, link or whatever. It's not these young people who are the cause of my fatigue, it's just seeing how jaded a lot of them seem to be. They appear to get little enjoyment from things that aren't experienced through some form of device, or doesn't link back to that universe. Worse again, they don't actually seem to be getting any real happiness from this electronically-geared existence. But the worst thing? All of this is seen as 'normal'.

Posted by Beach-Combing Magpie at Thursday, March 31, 2016 No comments: 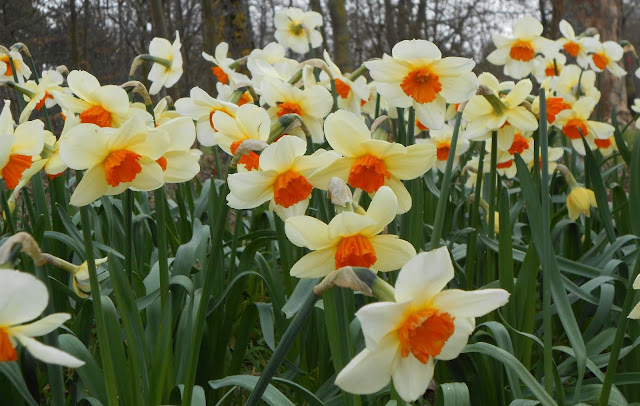 The clump of daffodils that I espied at the top of an embankment during the daily tram ride to work this week reminded me of the famous line "There's gold in them thar hills". I'm not sure if this is actually a quote dating back to the Californian Gold Rush years, or is simply a saying refering to the need to glean any benefit from whatever life throws your way; good and bad. Either way, as this is never my favourite week of the year, I decided to follow the golden trail and duly raced out of work one lunch time, scrambled along the (very muddy) slope to get to the beautiful flowers in question. Just after I'd reached the daffodils, the wind started to build up and it promptly started to rain, so I arrived back looking the worse for wear, but feeling great!

Posted by Beach-Combing Magpie at Friday, March 11, 2016 No comments: