The flora & fauna of façades & the Stoneheart of Charlie Fletcher....

I've just finished reading Tolkien's 'Hobbit' to my son, taking a momentary break from his other book which we have yet to finish. Many books you encounter when young leave an indelible mark on you in life, yet while this ensures that you never forget them or the powerful effect they had on you, when you try to return to the vivid place these books led you, enthralled, the result can sometimes be an anticlimax, leaving you bereft, locked out 'on the other side'.

I started to read The Lord of the Rings when I was young, having borrowed a copy of the mighty tome from a friend, however was unable to read in its entirety and decided to read it 'later'. The' later' in question proved to be several years after that initial false start, just before heading off to university. However the book that I had savoured each morning before going to school, totally absorbed in the descriptions and dénouements of each story within the whole simply didn't have the same effect at the age of nineteen and I felt so disappointed in myself, unable to slip back into this mesmerizing world. I felt I'd maybe inexplicably grown out of this magical world and regretted that I hadn't read it completely at the earlier age.
My father read us The Hobbit when we were very young and although I found it too difficult to understand, even less follow, it did leave its mark on me. Although I had no concrete memory of my dad's reading, when I read it myself as a teenger I suddenly had a feeling of déjà vu when encountering the slimy, fascinating Gollom and the terrifying Orcs. What also resurfaced during my own reading of The Hobbit was the memory of the fear and excitement that I'd felt at five years old when we had listened to these same terrifying accounts at bedtime, but had totally forgotten. So I decided that I had to read The Hobbit to my son so that he too could benefit from its full effect before moving onto The Lord of The Rings, and while as a teenager he can read alone, I was more than happy to read the book to him and so relive the book myself! My son greatly enjoyed The Hobbit and is now off to read the sequel - on his own this time as he has found his wings... Apparently the book is currently being made into a big-screen film and will be out in 2012; can't wait to see it as the cartoon version from the 70's was quaint but didn't really hit the mark.
The other book which we'd been reading before Tolkien is the fantastic work of Charlie Fletcher, 'Iron Hand'. This is the second book of the 'Stoneheart' trilogy, the third novel being 'Silvertongue'. In this clever book destined for children (but a pleasure for adults who may be reading it) the perilous journey through and across a hostile London is contined by the two young heros of the first novel, Stoneheart.
I particulary enjoyed the way that the statues, ornamental details of buildings & monuments of London have litterally been brought to life, free to relive aspects of their history and forge destiny again, and must now seek to accomplish their aims - bestial & demonic or otherwise. In a city such as London, with its dense, multi-facetted history  there are innumerable rich architectural features, statues and sculptures which reflect this past, but no longer 'speak' to us since we have lost the ability to even notice their presence all around us, or to 'read' their messages, even if we do acknowledge them. How many statues are simply not understood today because the historical context isn't known, or perhaps the human meaning is lost under a mass of dry facts or again bear mythological references that we are unable to 'translate' in modern times? It is this huge, diverse alternative world already surrounding us that is brought to life for children in Charlie Fletcher's works.
The characters which populate this alternative London - a frightening 'un-London' - are divided into two groups - the 'Spits' and the 'Taints' and it is the interaction between these two and their impact on the young heroes which lead the storyline. The 'Spits' are characters made in the likeness of those they commemorate and have the spirit and speech of that person; the 'Taints' are often of mythological or pre-historic origin and are generally malevolent creatures that cannot speak. The two protagonists - the teenagers - are able to 'see' this perilous parallel world which other mortals fail to do, and in turn have become visible to the members of the two opposing groups that now follow them, viewing these children either as prey or as vital players in destiny. The young boy, George, followed by Edie, the girl, has been thrown into a dangerous, initially bewildering world where he must decypher all around him as he embarks on a modern-day Odyssey across London, all the while pursued by the creatures of this parallel world.

In the Stoneheart trilogy the grimy features of London are given a vibrant life of violent intensity of their very own, whilst the mission of the two young people goes beyond the fight in this alternative world, since both teenagers have to confront their own pyschological battles against the solitude and loss they have encountered in their personal lives...
Well, we have yet to read Silvertongue but are already excited at the prospect, and will be very interested to see the future film adaptation of the trilogy. 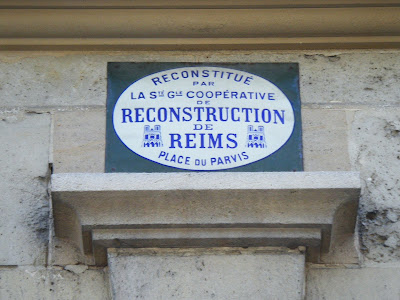 Sadly I can't read the stories behind the majority of the ornamental architectural features that surround me in this city, but that certainly doesn't prevent me from looking up when I walk in order to find something I'd previously missed. Ornamental details are to be found on many of the buildings dating back to the late 19th century and even well before, but many of these were lost during the Great War. However, during the reconstruction of Reims in the 1920's many details were added to the buildings, giving a unique touch that is always highly decorative, but generally discreet, often humourous, and sometimes borders on the kitch, but I love them! These are things that we take for granted, backgrounds to our daily life that we just assume will always be there but unfortunately that isn't the case. My favourite façade detail here was the magician and dove positioned high up on a building near the city centre, which very few people had ever noticed it. Unfortunately, due to adverse weather conditions much of the detail of the plasterwork was damaged a few years ago and while it has been restored, modern-day techniques simply haven't recreated the delicate features that I loved so much. Although I'm glad the magician is still with us I can barely stand to look at his coarse features now. Other ornamental designs have fared a little better, but already the iron armature within the forms are starting to rust and weep on the surface of the features. All the more reason to appreciate and share these beautiful details whose sole purpose appears to be one of beauty and wit, enriching modern-day lives that are often in danger of becoming flat and functional.....
Here are a collection of my favourite façade finds.