A mention of mermen


Like their female counterpart, mermen are legendary beings - of half-man, half-fish form with the ability to enchant and entrance with their siren-song. Like the mermaid again, mermen have had a chequered past and varied reputation over the ages - once considered highly ugly and of malevolent intent, and then later thought to be dashingly attractive creatures, ready to aid sailors with their great knowledge of the seas. The merman features in many cultures - Greek mythology, Icelandic folklore, Dogon mythology and was a Mexican and Peruvian deity too, amongst others...


With his conch shell and three-pronged trident, Triton, son of Poseidon and Amphitrite in Greek mythology is perhaps the most famous merman who served as the messenger of the waves -the Trumpeter of the Seas. Indeed, his twisted conch could be sounded so loudly that it would frighten away adversaries in battle, and could create wild waves or still the waters. 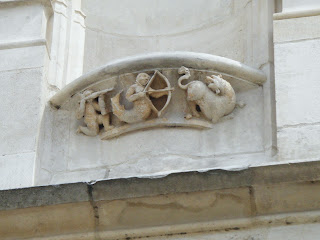 'Triton' was to become the name used to describe all mermen who would accompany Poseidon, annoncing his arrival with their conch shells and also pulling Aphrodite's chariot like hippocamps.

Ovid describes the transformation of Glaucas the fisherman to merman in Metamorphoses...

Having eaten magical herbs our hero becomes an immortal fish-being, and whilst at first shocked by this metamorphosis, Glaucas soon accepts his fate and enters a group of sea deities, learning the art of prophecy from them. When he falls in love with the beautiful nymph Scylla she rejects him and so he asks for help from the sorceress Circe, in the form of a love potion. Circe herself soon falls in love with Glaucas but when in turn she is rejected the spurned witch turns Scylla into a sea monster out of spite! As a creature with dog heads growing from her waist, Scylla is rooted in the sea, to rage against every passing vessel and slay sailors in peril. On the other side of the strait is Charybdis, the naiad daughter of Poseidon and Gaia, likewise transformed into a sea monster as a punishment administered by Zeus for her voracious appetite. Sailors avoiding the one monster would fatally encounter the other - hence the saying "Between Scylla and Charybdis", to mean "between a rock and a hard place' which could probably be used to say how Glaucas finally feels!


I came across a few mermen (carved or sculpted only!) this summer and came to the conclusion that many of them seem to share pained expression or at least appear weighed down by their lot.
This doom and gloom aspect is reflected in the work by the Victorian poet Mathew Arnold, 'The Forsaken Merman', when the hero and his children are deserted by Margaret, mother and wife, as she returns to dry land. 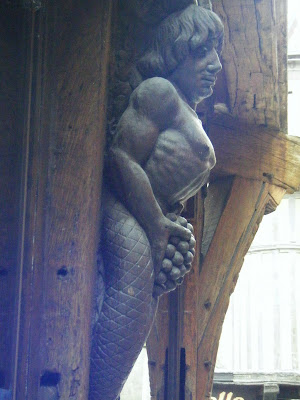 THE FORSAKEN MERMAN
Come away children,
Come children, come down.
The hoarse winds blow colder,
Lights shine in the town.
She will start from her slumber
When gusts shake the door,
She will hear the winds howling,
Will hear the waves roar.
We shall see, while above us
The waves roar and whirl,
A ceiling of amber,
A pavement of pearl,
Singing, "Here comes a mortal,
But faithless was she,
And alone dwells forever,
The Kings of the Sea."

All in all I would say the while the female of the species is indeed more deadly than the male (to quote Rudyard Kipling) enchanting mermaids sometimes seem to have a sunnier existence than the mermen, despite the dubious motives of their actions and morals and of course with the exception of Andersen's Little Mermaid....