'Pole Top Jewels' from the top of a mountain... 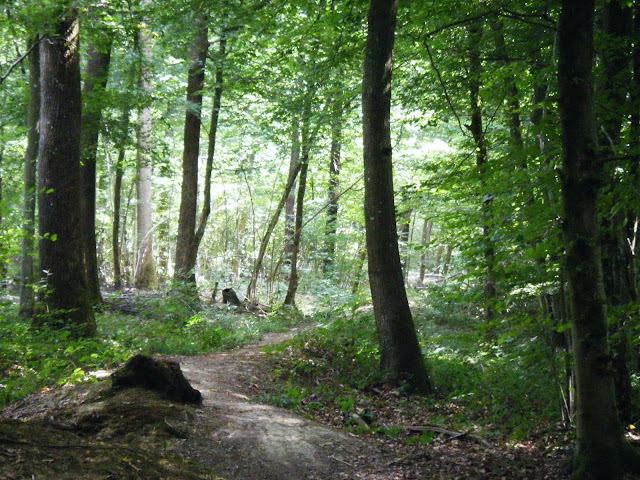 This weekend we decided to jump on a little local train for a day trip to the woodland above Rilly-la Montagne, in the parc naturel et régional de la montagne de Reims. This mountain is in fact a fairly flat stretch of land between Reims and Epernay, and while its highest point of altitude, the Mont Sinaï, only reaches a rather modest 286 metres, the difference in height between the chalk-based plains where champagne vines grow, at 8Om, and the wooded land 2OOm higher justifies the application of this name. 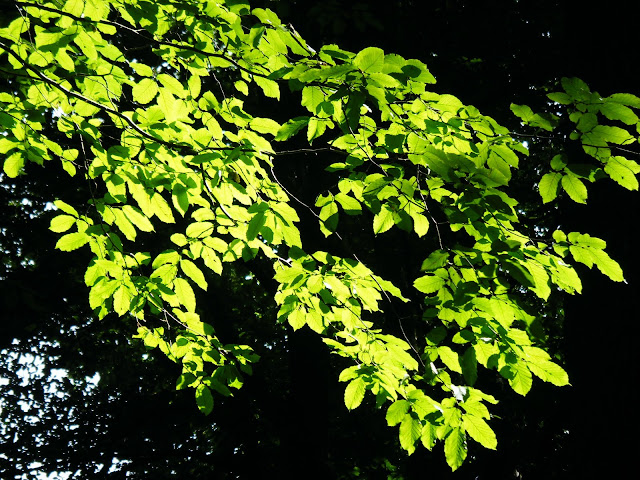 The woods themselves are, of course, very pretty and the land is well maintained, with paths and tracks that criss-cross in front of you, nevertheless leaving you the impression that you are in the depths of the countryside. 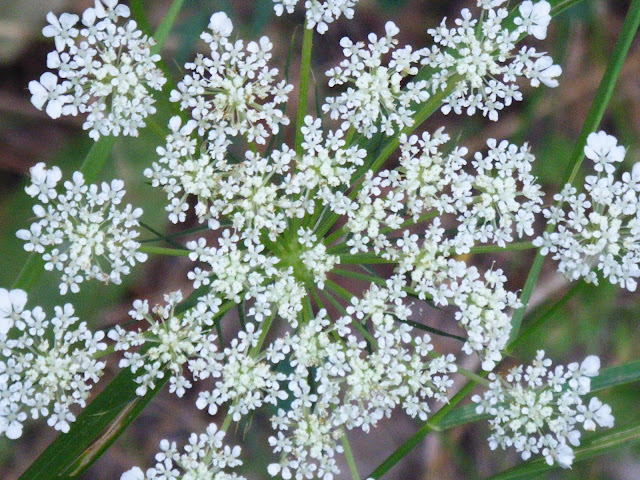 Wildlife is abundant, from the croaking frogs that splash in puddles and ponds as they leap away from us humans, the innumerable insects and birds to the biggest mammal to be found there; the wild boar.

Fortunately we didn't see any boar as these tend to be dangerous when with their young - yet it must be said that with or without their offspring these creatures look most intimidating with their pre-historic form, bristly coats and impressive teeth!

This prehistoric feel is enhanced even more by the thickets of Horsetail equisetum plants growing in the ponds. This plant, considered a 'living fossil' since it is a relic from the ancient past, links the vegetation of the Carboniferous Age to that of today, creating the impression of age-old swamps. 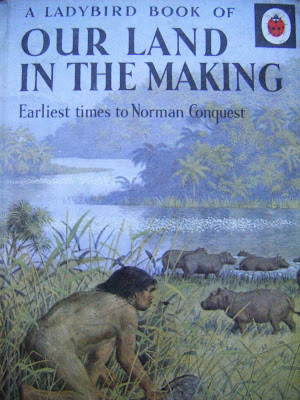 The giant dragonflies flying over the surface of the water completes this effect and reminds me of my old Ladybird children's book - Our Land in The Making.


I used to love looking at the pictures when I was little and always thought that I'd come across various different forms of pre-historic creatures the minute we wandered into swampy marsh land around our old house in the countryside. 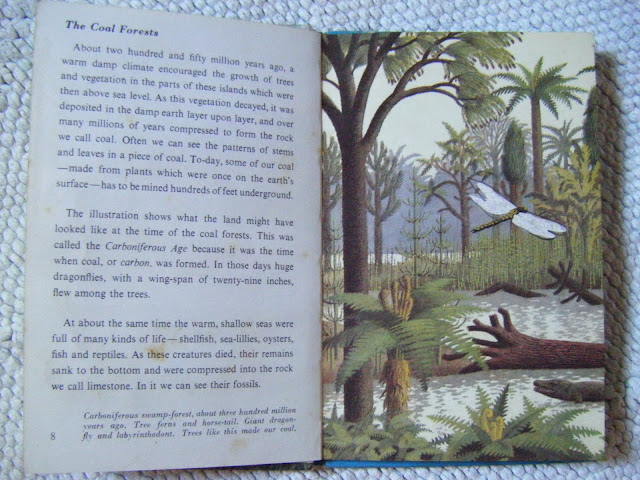 This summer the water level is very low due to lack of rain in the region over the past few weeks, but looking carefully newts can still be seen in the watery ditches and pock-holes that are characteristic of the woodland here. 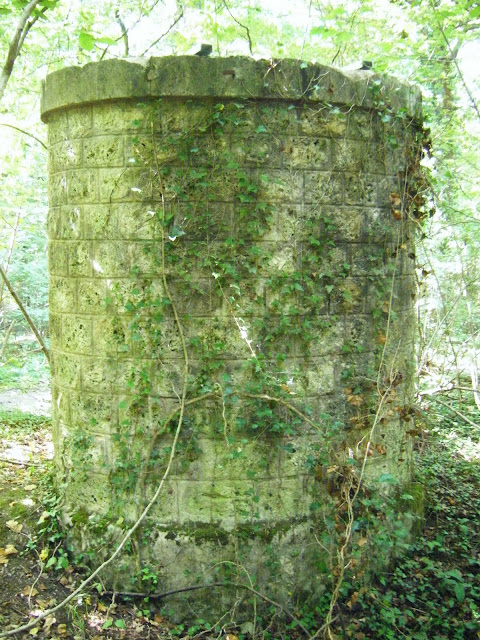 Indeed the tranquility and the beauty of the greenery here in the mountain leads us to forget a vital detail about this landscape; directly below us is the train tunnel linking Rilly to Epernay. Apart from squat stone chimney formations, used for ventilation, we appear to have no indication of the tunnel's presence as we walk quietly through the woodland. However the very form of the landscape gives testimony to its existence and history....

Built in 1852, the tunnel was the second largest of its kind in Eastern France, and during the Second World War was the target of a dramatic Allied bombing mission involving the Dambuster squadron, no less.


The German Army had requisitioned this tunnel in 1944 in order to set up large-scale bomb-making facilities for missiles destined to destroy British cities. Entry to this bomb-factory tunnel was refused to all French, although one brave local was able to brave this, and spied on the proceedings by hiding himself under the carriage of a Reichbahn train passing through. Thus informed, the Resistance was able to organise a mission to obliterate this Nazi missile-production site. During the first Allied raid, Lancaster and Mosquito bomber planes targeted the area with Tall Boys bombs which hit the ground at great velocity and force, causing huge shock waves as these dug into the soil, damaging vital man-made structures underneath. Following this, the Dambusters 617th Squadron were called in to block off both of the entrances to the tunnel - thus sealing off the bomb-making facilities. The mission was a success, although the monument to be seen in Rilly today shows that there was a price to pay for this, with loss of human life amongst civilians and Allied bombers and great damage to the village and its surrounding woodland.

Today's landscape bears the mark of this wartime activity with the strange crater-shaped pits in the land which the trees and greenery seem to accommodate but never fully conceal. This is rather like the landscape of Verdun, with its former Great War trenches which are now leafy tranquil zones that belie the carnage of the past, yet can be seen by similar pock marks. 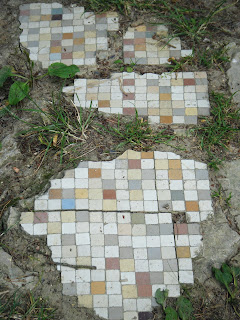 I don't know whether it was in an endeavour to fill in damaged land after the war, or a more recent attempt to render the tracks of Rilly-la-Montagne more stable (apparently there is a tendancy to landslide), but there are traces of building rubble visible, here and there, in the woods...


Old decorative household tiling can be seen in different parts of the wood - some of these old tiles being over 100 years old. This time I came across strange glass forms protruding from the hardened ground and was pleased to find a lovely rounded green shape that I initially thought was part of a door/drawer handle. Having found several other glass shapes scattered over different parts of the wood I tried to work out what they could be...as the top part wasn't truly round and had the thread for a screw system. They looked vaguely like the porcelain forms that I used to see on old telegraph poles - and bingo! They are!
These glass forms - like mini bell jars - were used as electric insulators on utility poles to prevent the wooden part of the electric pole from getting wet, which would lead to conduction via water and the loss of electric current. 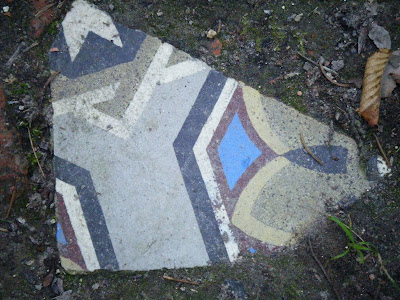 Apparently some of these insulators date back to the introduction of  electric poles in the 1850's although this system of insulation was fully replaced in the 1970's. In America these glass insulators have been named pole top jewels, and their varied colours and shapes have attracted many collectors to the extent that there is even a magazine devoted to this - Crown Jewels of the Wire. What a beautiful term!

It is said that even between set colours there can be variations since the glass colour tended to be altered over time by the ultra-violet rays of bright sunlight. 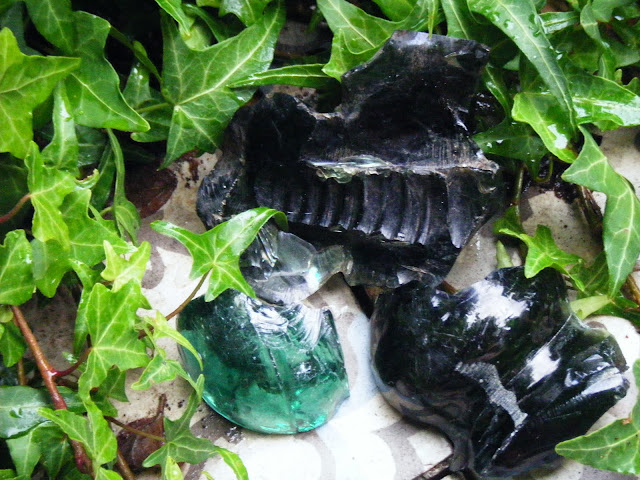 Of course I don't know the age of my pieces of pole top jewels, but as with collecting sea glass when beach-combing, I like the idea that these strange glass forms have a past...
The next time we go back to the woodland at Rilly, I hope to walk over to Germaine, but I'll be keeping an eye out for other pieces of treasure... and wild boar!