Pieces of glass, pieces of porcelain..... Maison Picassiette - a house of peace. 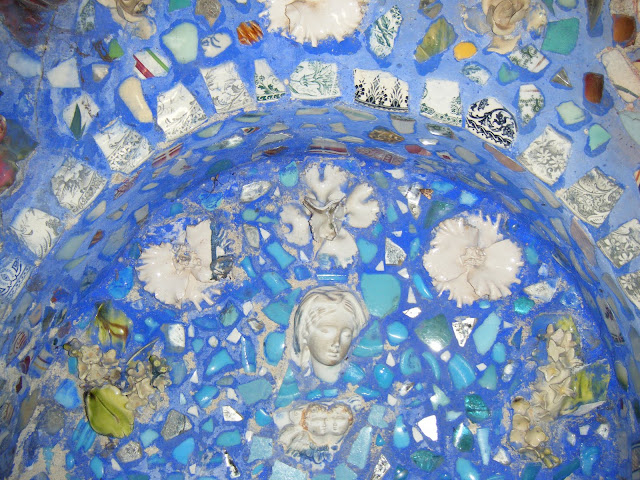 I recently heard about an original house in France, built from a modest person's dreams and imagination, as an antidote and haven from the ugliness present in the world around him. From pieces of discarded broken glass and porcelain that caught Raymond Isidore's eye one day when walking to work, this man created a home and garden that can only catch our attention and fire our imagination too; La Maison Picassiette. I set my heart on a visit this summer..... 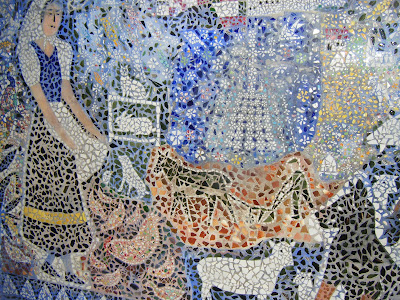 Raymond Isidore was born near Chartres, in 1900, at the very beginning of the 20th century, yet his life's work - often qualified as 'art brut' seems to be timeless, and its creator was somewhat a visionary. He was from a poor working-class background, born to a large family with no apparent creative or artistic leanings, yet he himself was driven by his creativity. Whilst he achieved, indeed by far surpassed what he had originally set out to do, Isidore was forever considered a social misfit, an eccentric outsider who never really received the recognition that he deserved in his lifetime. Isidore was well aware of his social status, but found peace and a raison d'être in his lifework. He was to say that like the broken glass and crockery that others rejected, he had been 'discarded waste' but had dared to create life from this existence. Just as Isidore gave a second, wildly imaginative life to the urban flotsam and jetsam he found as a cemetery sweeper, he built himself a parallel life.."Many people could do the same as me, but no, they daren't do so. I used my hands and they made me happy. I would like to be an example". 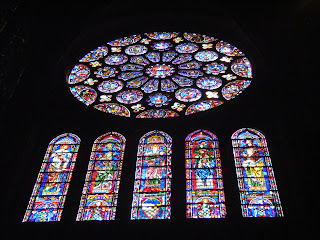 As a child Raymond visited the cathedral of Chartres and discovered the gift of 'sight' - an ability to see beauty around him. The magnificent stained glass windows, with their bright 'Chartres blue' dazzled the child and left a lasting impression, inspiring his work which itself was a form of paradis terrestre. La Maison Picassiette, with its bright blue tones has numerous references back to the cathedral and other religious monuments in the frescos, mosaics and modelled forms that abound in the house, yards and gardens.

Said to have his own form of deep spirituality, Isidore made of his creation a hommage to life and Creation. Biblical imagery runs alongside that of allegory, the artist's dreams, imagination and portraits of himself, his wife and animals to create a strange visual and material patchwork that finds its own balance, coherence and poetry. 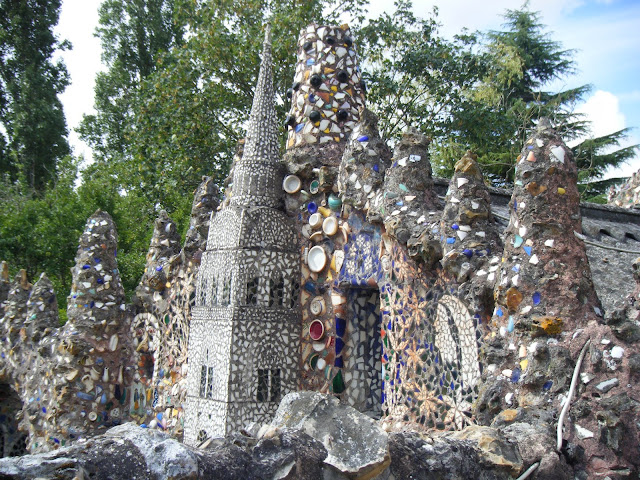 Married to a woman eleven years old than him who already had three children, Raymond Isidore bought a plot of land in 1928 in order to build a home. Apart from the artisitic grandeur of the resulting house and garden, the one-floor home, with its tiny rooms barely seems adequate to house a relatively large family and seems to lack basic commodities and comfort. With its complex designs and overwhelming decor that covered all from floor to ceiling and everything between (bed, radio set, sewing machine, stoves...) it is hard to imagine actually living in such a home. Nevertheless the Isidore family did precisely that in their haven of peace in the quaintly and appropriately named Rue du Repos throughout their married life, and Raymond's widow continued to live there well after Raymond's death in 1964. Isidore started to decorate the interior of the house in 1938, but soon ran out of space and was therefore to devote the majority of his spare time over the next twenty-five years religiously extending this creative mission to the exterior of the home, out-houses, yards and gardens. Apparently more than 15 tons of discarded broken glass, porcelain, crockery, shells and decorative stone adorn the different surfaces and were manipulated by Isidore using basic tools. Such were the requirements of his creation that he was obliged to buy old crockery from household sales and auctions in order to build up a reserve of material to feed his inspiration and creativity. 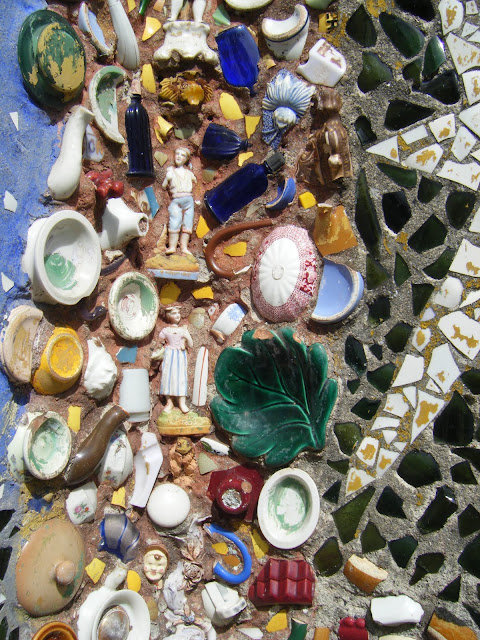 In this manner, broken teapots, pharmaceutical jars and containers, eau de cologne bottles, crockery are used with great imagination to create a beautiful whole, that is both moving in its simplicity and devotion to life and family, and breath-taking in its complexity and scale. Sadly Raymond Isidore is said to have suffered from depression and lack of inspiration towards the end of his life and his later work seen in the far garden seems to reflect this.


Today the Maison Picassiette is a classified historical monument, each year attracting thousands of visitors who consider that in its own way it bears a spirituality and creativity comparable to that of Chartres' world-famous cathedral. In 2000 the city of Chartres celebrated the centenary of the birth of the Maison Picassiette's creator. Things were not always thus, however... While Picasso visited the house in 1954 - perhaps one of the origins of the name Picassiette (the Picasso of Broken Plates) - and the photographer Doisneau in 1956, the house itself was left a poor state when Mme Isidore finally moved and was given no state maintenance. 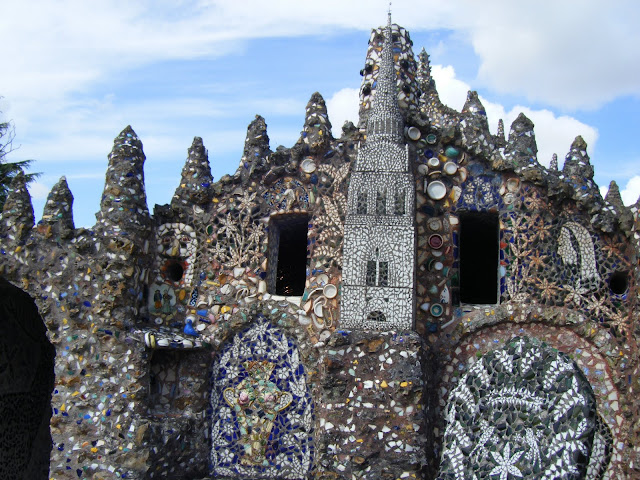 The Maison fell into such a state of disrepair that the city considered destroying it, whilst Japanese and American enthusiasts are said to have offered to buy it to dismantle and install in their home countries.
Finally the Maison was recognised for its full cultural value and was classified in 1983 and not before time! Today the house and gardens require continual repair work as the cement and interior plasterwork suffer from the effects of rain and humidity. As for the glass, porcelain and crockery, Raymond Isidore left a large stock in an outhouse that is now used for repairwork and replacement. 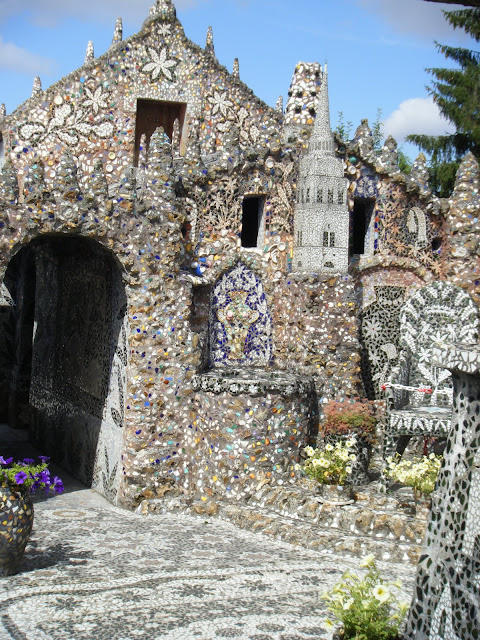 Unfortunately my photos just do not do justice to the Maison Picassiette! To fully appreciate it, a visit is greatly recommended, especially on the bright sunny day like the one that I luckily had! Faute de mieux, you can always visit the site below, with its video, but then you wouldn't be making a financial contribution to the Maison through an actual visit.

However, the good news is that a film of Picassiette is under production right now, and should be released next summer. It probably won't hit Hollywood but will open people's eyes to a creator who focused on the beauty he found and created around him. I can't wait!
Posted by Beach-Combing Magpie at Tuesday, August 17, 2010