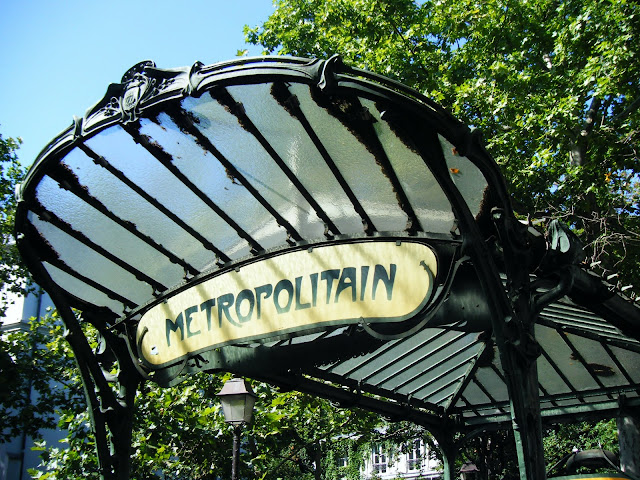 The metro station above, Les Abbesses, with its turn-of-the century Art Nouveau style must be one of the most easily-recognizable images of Paris.... Hector Guimard (1867-1942) was the architect responsible for this highly characteristic design and conception and many metro entrances bear his particular organic, vegetal style - not just in Paris but also in such far-flung places as Chicago, Lisbonne and Mexico. The strange Triffid forms, influenced by the ornamental style of Viollet-le-Duc departed from the classical, historical forms of contemporary art to create work that would celebrate the introduction of the metro system of Paris in 1900 to coincide with the Exposition Universelle of 1900 (albeit several years after the inauguration of the London Underground network). 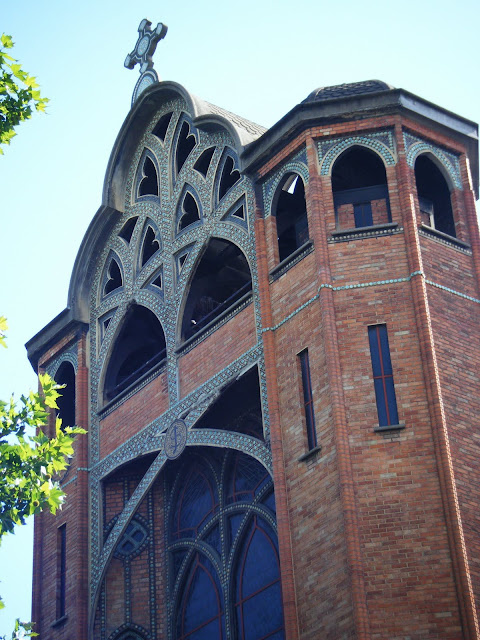 It was remarked by a contemporary critic that the metro entrances with their cast iron structure, glass panels and drooping amber lamps looked like "dragonfly wings" although I'm not sure if that was meant in a derogative sense or a flattering one - I'd take it as the latter! The semi-industrial techniques used for the realisation of this organic work facilitated manufacture, transportation and assembly in a manner that was somewhat new to the epoque. It was this same endeavour to use new materials and approaches in art and architecture that is reflected in the church of St Jean of Montmartre which I was able to visit this weekend.

It could be said that St Jean is a relatively 'recent' church set on a very old religious site on the butte de Montmartre. Throughout antiquity several temples had existed there, and later the first Christians were to be persecuted on this same site - hence the name Montmartre - hill of martyrs. St Jean was conceived at a time when the parish church of St Pierre was momentarily closed, leaving local Catholics in need of a place of worship. 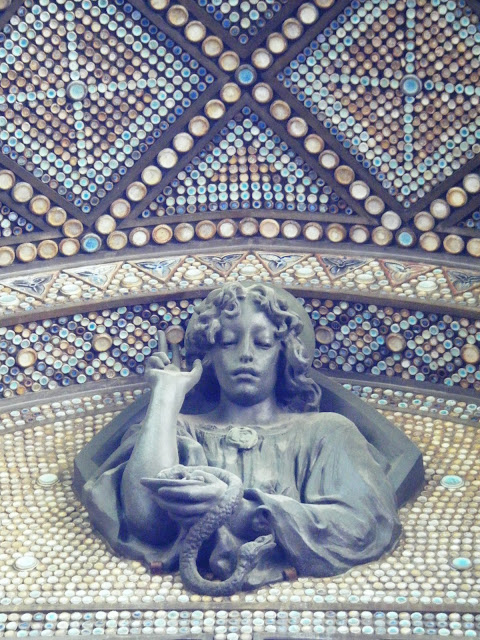 Anatole de Baudot (1834-1915) drew up his plans in 1894, although it was to take several more years for construction to begin and required the architect to overcome obstacles to the work's very realisation. Indeed, the church was the first of its kind since it used reinforced concrete which provided weight-bearing properties within a light, airy structure previously unseen. Unfortunately, this same innovative structural aspect did not inspire confidence amongst laymen to the extent that many questioned the resistance of the building, and work drew to a halt when it was demanded that stability was verified and there was even a risk of demolition. Luckily work was resumed and the church was completed in 1904.

I love the spidery, slightly oriental forms of the building as a whole, but up close it is the ceramic decoration, with its beautiful colours that grabs my attention. 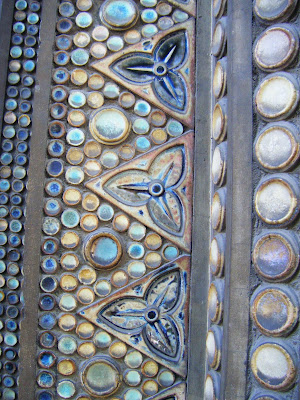 The stoneware 'pastels' of Alexandre Bigot create a rich texture to the exterior of the church, but are also apparent on the inside too - although the curé understandibly doesn't like visitors clambering around the altar to take photographs (as the flower attendant informed me). The altar is enriched by beautiful gold pastels too, which I found breathtaking (but didn't like to take a photo!). 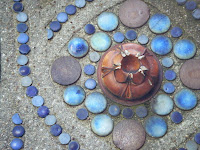 With its avant-garde forms it seems difficult to believe that the church of St Jean dates from the beginning of the last century.
Posted by Beach-Combing Magpie at Wednesday, August 18, 2010