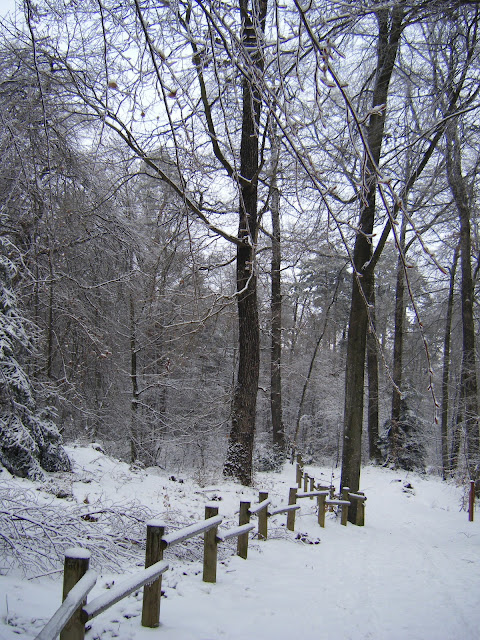 The snow has been back at intermittent periods, followed by icy rain which has created beautiful icicles suspended from every natural and man-made form. 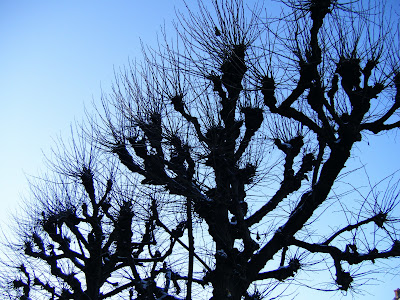 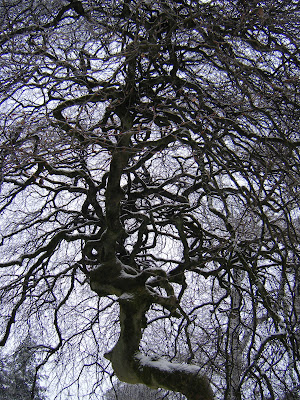 Our God, Heaven cannot hold Him
Nor earth sustain;
Heaven and earth shall flee away
When He comes to reign:
In the bleak mid-winter
A stable-place sufficed
The Lord God Almighty,
Jesus Christ. 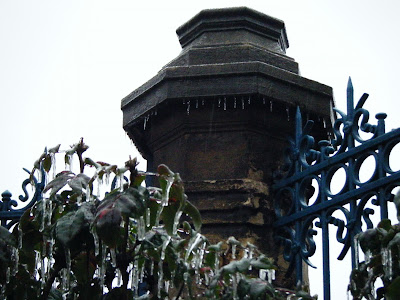 Angels and archangels
May have gathered there,
Cherubim and seraphim
Thronged the air,
But only His mother
In her maiden bliss,
Worshipped the Beloved
With a kiss.

In the Bleak Mid Winter was one of the poems written by Christina Rossetti in the latter part of the19th century. It was to be set to music, initially by Gustav Holst and later by Richard Drake and is one of my favouriteChristmas Carols.

Follow the link below to listen to the choir of King's College Cambridge singing it...
http://www.youtube.com/watch?v=_hs9-Sxf9j4&feature=related
The 29th Deceember is the date on which Christina Rossetti died in 1894, her grave being in Highgate Cemetary. Although Christina Rossetti is perhaps better known as the sister of the Pre-Raphaelite painter Dante Gabriel Rossetti, she was a recognized artist in her own right as a poet.
Despite the fact that her life was dominated by her religious convictions as a devout High Anglican, Christina had a relatively rich existence in the sense that she was able to frequent renowned artists and writers of her epoque thanks to her brother's wide social circle and the fact that she was born into a family of artists, scholars and writers. Swinburne, Whistler and Lewis Carroll were amonst those she would have met, while one of the original founders of the PRB movement, painter James Collinson, had demanded her hand in marriage as did Charles Bagot Cayley. Both men were rejected due to their religious faith, considered incompatible with that of Rossetti. She did herself appear in several of Dante Gabriel Rossetti's works - the most famous perhaps being The Girlhood of Mary Virgin (1849) where she modelled Mary.
In her writing Christina Rossetti often dealt with sober themes that led her thoughts and life; that of difficult love, death and resignation.

Elements of repression and restriction are reflected in her fairy story Goblin Market whist her own concerns about female fellowship were put into action through her volunteer work with fallen women at St Mary Madgalene's penitentiary. Rossetti devoted much of her life to her family and not surprisingly she had exacting standards regarding those who were to enter the family sphere.

Dante Gabriel Rossetti was forever drawn to the writing of the 14th century Italian poet Dante Alighieri - especially the agonised love between Dante and Beatrice in The Divine Comedy as a source of inspiration to creativity. To a certain degree Rossetti replicated this duality in his relationship with his muse and long-term lover, the model Lizzie Siddal.
It was Lizzie Siddal who was the model for John Everett Millais' Ophelia - a captivating painting due to its intense reality and even more moving since the girl subsequently became ill due to the extended period spent submerged in cold water. Lizzie Siddal was to be plagued by illness for the rest of her relatively short life and her health severely compromised by her addiction to laudanum. Having already had a still-born child, Lizzie again ill, depressed and pregnant  was to die of a laudanum overdose in 1862. Much of this is, of course, discussed in Lucinda Hawksley's biography, The Tradegy of a Pre-Raphaelite Supermodel (published by André Deutsch 2004).
Both Rossetti and Lizzie Siddal having artistic talent and temperament and subject to self-destructive behaviour due to mood swings and bouts of depression, they formed a complicated couple wherein the muse had to wait 9 years before the artist was to 'make an honest woman of her' - through marriage. Rossetti's continual postponing of their marriage and his infidelities did nothing to aid Lizzie, and the reception of Lizzie by the female members of the Rossetti household, when Rossetti finally decided to present her, did nothing to encourage the reluctant man in his obligation. Christina was said to be fascinated by Lizzie Siddal - with her flame-haired beauty, strange aurora, prickly social skills and unconventional lifestyle -  and she could see how her brother was fatally drawn to her. At the same time Christina is said to have received Lizzie with a certain coldness and even perhaps slight hostility towards this bewitching creature who had beguiled her brother and blinded him to the fact that she simply wasn't worthy of him. Nevertheless, Christina's vision of Gabriel Dante Rossetti's relationship with his muse is perhaps quite acurate and was reflected in her poem In an Artist's Studio.

Despite her own artistic talent, recognized by the art critic John Ruskin, Lizzie's potential was forever hampered by ill health, depression and rather erratic lifestyle.
Lizzie did, however, inspire many works herself, and perhaps the most famous of these was Beata Beatrix, painted after Lizzie's death. Her ethereal beauty continued to haunt Rossetti even after her demise and this haunting image was maintained by legend... Rossetti had her coffin exhumed so that he could recover poetry buried with his muse. The face was said to be ever-beautiful to behold, and the striking red hair had continued to grow after Lizzie had left this world...
Her grave is to be found in Highgate Cemetery, as is that of Christina Rossetti...