I didn't have time to post this before Christmas, but maybe it might make people feel a little curious to visit this market, or any other of the hundreds that animate town centres over France in the weeks leading up to Christmas. Not surprisingly once Christmas Eve has passed, the shelves are emptied as the wares are packed up and the huts themselves are dismantled....So here are some of the goods on offer... Whilst many of the food and drink items have a historical and traditional relevance to the different regions of France, many of the stands offer articles that have a much more international flavour... 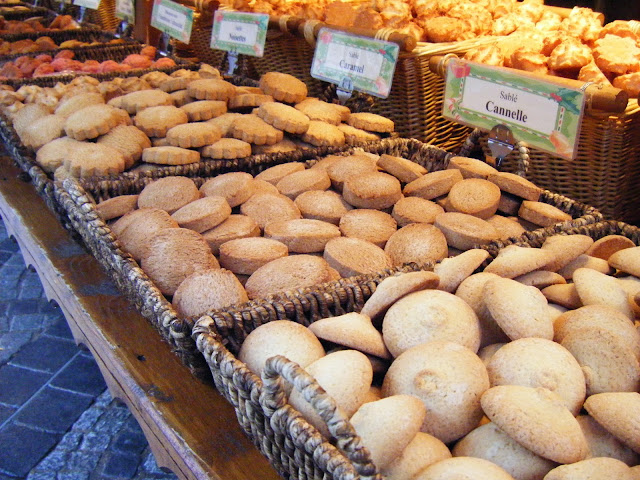 The first markets are said to have appeared in 14th century Germany and Alsace with the Marché de Saint Nicolas. 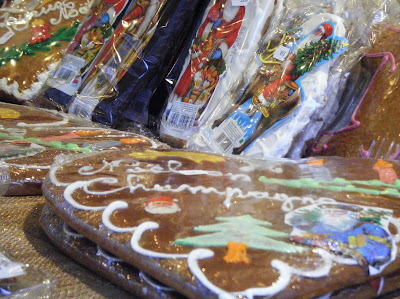 Documents referring toChristmas markets date back to 1434 under the reign of Friedrich II of Saxony, with mention of a Striezelmarkt in Dresden. 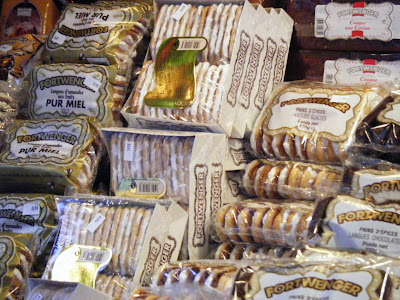 This word in turn relates to Struzel or Stroczel cake better known now as Stollen, sold on the market. This, along with many types of biscuit and glazed cakes typical of Alsace figure largely on the modern stands.


This is generally accompanied by mulled wine, although today other variations are available such as hot cider and orange juice. I wasn't even tempted to try these this time because the traditional wine just looked so inviting, especially during the cold spell we've been experiencing, along with the majority of European countries! 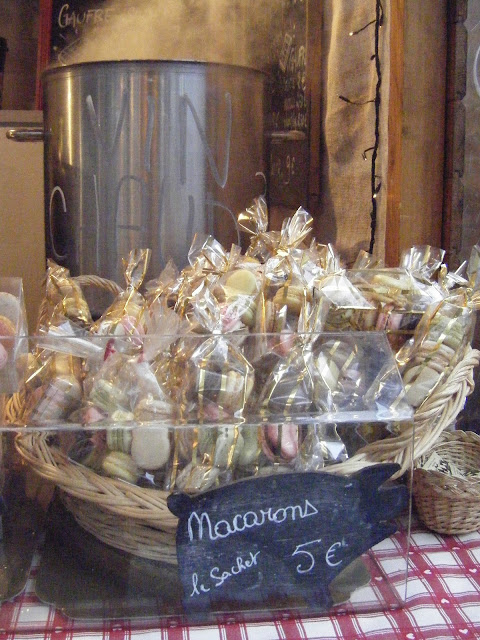 Macarons are also very popular here... The exact origins of this almond meringue pâtisserie seem to be difficult to define - some say that the recipe was brought to France with Catherine of Medicis. Others claim to have invented the macaron or at least to have encouraged its popularity. Various pastel colours and differing sizes exist, but the reference for the macaron here in France has got to be Ladurée - known as the Paris Macaron.

In Reims, the biscuit that traditionally accompanies champagne throughout the year and not just at Christmas is the Biscuit Rose - the reference for this being La Maison Fossier...

There are also pâtés en croûte and savoury brioches - which are rather like large sausage rolls with various types of meat filling... 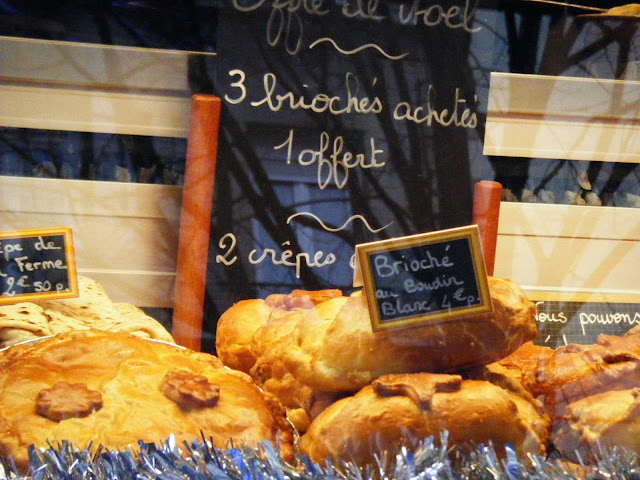 Many forms of ham, dried sausage and smoked meat are also sold on the market. These can all be served with condiments - here are all different flavours of mustard that are produced here by a Rémois company - Clovis...
There is also olive oil... 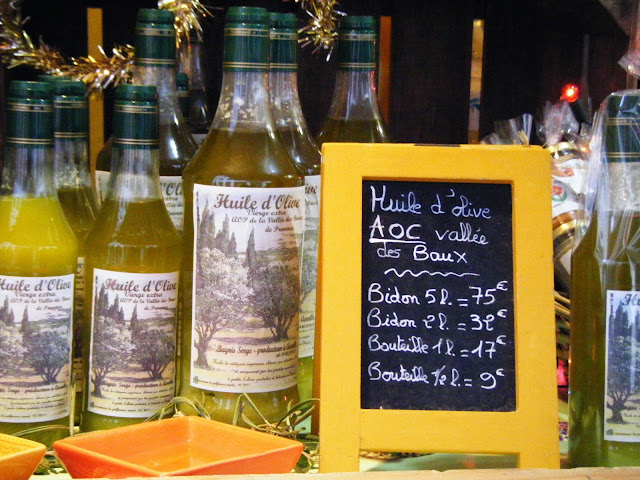 Of course these are all presented next to stands selling various different types of wine, spirits and beer.... 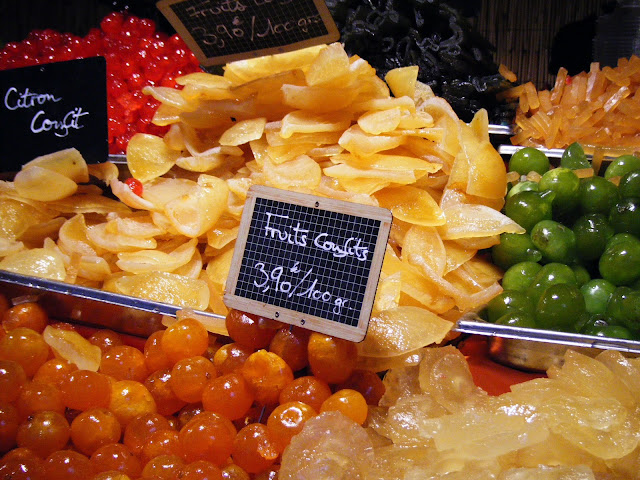 One of the more colourful stalls sells dried and confit exotic fruit....This fruit comes from the Provençal tradition of the 13 desserts that are served at the end of the Christmas meal, which in France generally takes place on the 24th December, rather than on the 25th as we tend to do in England...

The number 13 is symbolic of the Last Supper with Jesus and the 12 Apostles. Here the sweet offerings are divided into 4 categories - Pâtisserie (Pompe d'olive and Oreillettes); Confisserie (Nougat and Pâtes de fruit); Fruits secs (the 'Mendiants') and finally Fruit frais (fresh clementines, grapes). Les Mendiants (referring back to the Mendicant religious orders dependant on charity for their livelihood) are the most important of the 4 categories and this group is itself divided into 4 groups...
Hazelnuts and walnuts represent the Augustinians; dried figs symbolize the Franciscans; almonds, the Carmelites and finally raisins represent the Dominicans.

The Santons are used to decorate the crêches, again a tradition from the Provence region in the South of France. It is said that santons flourished in popularity after the French Revolution when churches were closed and Midnight Mass banned, as were all public representations of the Nativity. The small brightly-coloured clay figurines enabled families to celebrate in the privacy of their own homes; in 1803 the first Foire aux Santons was inaugurated in Marseille. Here on the right-hand side of the santons photo above you can see a little person who was drawn to the colourful lollipops also on display....
Looking like brightly-coloured sweets are decorated glass baubles to be found alongside decorations more typical of Eastern Europe... I love the angelic expressions of the smaller Russian doll baubles.... 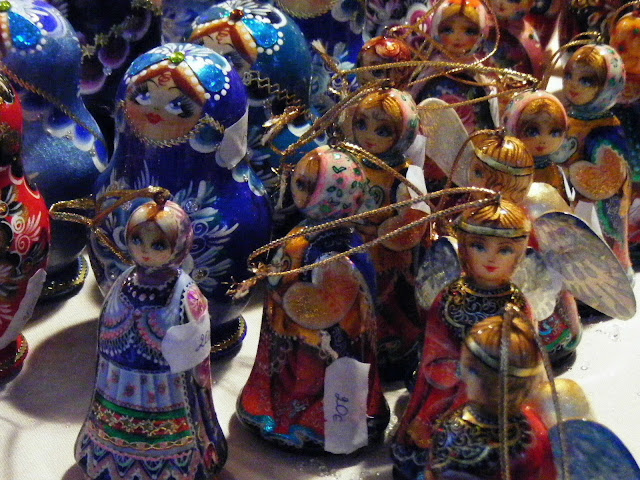 So now we'll just have to wait till next Christmas.... 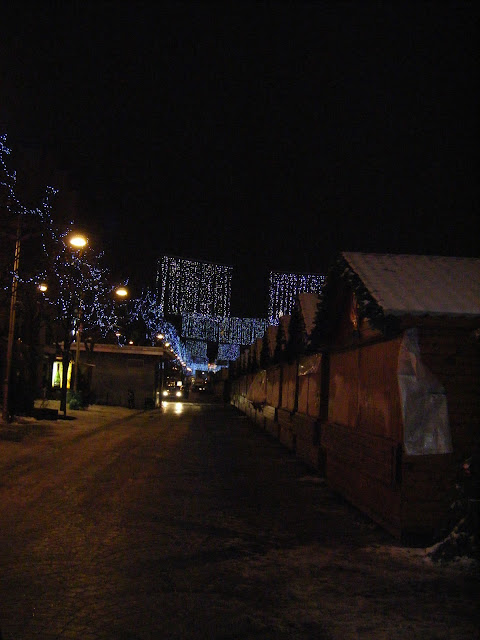