Plenum gratiae et veritatis - grace and truth - comes from the prologue of the Gospel of St John, Verbum caro factum est. Here in this stained glass window from the Evangelist church of St Jean at Montmartre, we typically see the Holy dove - image of the Holy Spirit, and symbol of peace, hope and truth. As one of the four apostles, along with Matthew, Mark and Luke, John was said to be the closest to Jesus Christ and is often symbolized by an eagle, whilst an angel, a lion and an ox respectively represent the former. 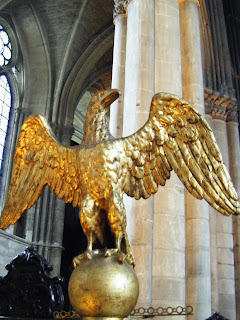 Considered to be the enemy of the snake, symbol of the devil himself, the eagle is able to reach celestial heights, has all-seeing vision and is said to withstand the blinding light of divine truth. It is the eagle which generally supports the lectern in churches and cathedrals and it is the lectern, of course, which bears the Bible, with the Holy word.


The majority of the sacred Christian edifices from the Middle Ages and beyond offer scenes of Judgement Day.

These present in no uncertain terms what will happen to those lesser mortals who have strayed from the Holy word.


Sinners' ill deeds are noticably considered and weighed and those led astray by temptation are separated from the saintly... Some may be cleansed by Purgatory, others not...
For those who remain unpurified, evil creatures are at hand to visibly herd them together and haul them off to Hell, often presented as a flame-licked cauldron.


The sinners, understandably, look petrified and perhaps a little repentant....

Meanwhile the devil and his fiendish helpers appear jubilant, brazenly looking directly at us as surrounding saints and angels look on with more modest expressions... There seems to be little hope of earthly redemption, as the devil has already claimed the souls of his sinners....
Famous for having heard the word of God, and yet being killed for this and her role in leading the Dauphin Charles to the sacred city of Reims to be consecrated King, was Joan of Arc - La Pucelle d'Orléans. Frequently seen as symbolic of the resistance of France against the enemy, Joan of Arc's intervention meant that  the long-standing hostilities between the English and the French took on a distinct religious aspect.
The Hundred Years War had begun in 1337 and were made up of a succession of disputes over the French throne. When Joan emerged on this tinder-box historic scene, the English had virtually gained dual monarchy under English control. When Joan was tried and condemned for heresy and witchcraft the legitimacy of the coronation of Charles VII was questioned, enabling the English to have a claim to the throne. She was burnt at the stake in Rouen in 1431, the body being burnt twice again so that relics could not be collected...
Unfortunately on the photo the national heroine looks as if she's just been struck in the course of a huge snowball fight which doesn't seem very respectful, especially as we English showed her no mercy and certainly flouted all laws....
This weekend I've been marking all my Law faculty students' exam papers....
Lex is the Latin word for law - meaning the system or body of laws, written or unwritten, to be applied to a case or issue. Meanwhile jus is the word for justice which is often  portrayed its allegorical  form on the facades of lawcourts, with the symbol of Justice, Justicia holding the scales to measure right and wrong, legal, illegal, in order to rectify the imbalance. She also bears a sword, ready to cut the line between the parties concerned. In French the verb used to describe the judge's decision-taking is trancher, meaning literally 'to cut'. The Goddess of Justice also wears a blindfold to show that she is not as such blind, simply not blinded by prejudice. 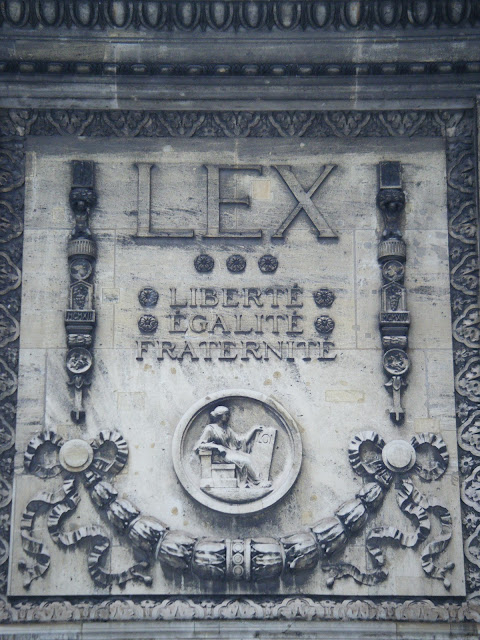 I decided to set a theme I always find fascinating and therefore more interesting to work through - namely the nature and difficulty of the role of the criminal defense laywer...The gut reaction to the ethics of this line of work is often the same, but is generally because we fail to see that the duty of the defense lawyer is ultimately to defend the integrity of democracy and the justice system and thus avoid any individual, be that the accused or the plaintiff, being oppressed or abused by law, and victim to miscarriages of justice. Well, that's the theory, but it does help to bear in mind even if it can often be difficult to comprehend, so I do enjoy reading what the students have to say on the subject, before being obliged to measure their work and give them a final mark.
I myself don't like beer, but a glass of wine after my day's work of  weighing up is welcome!

And just before I finish, in general terms, I suppose it might be appropriate to quote Shakespeare's The Merchant of Venice...

The quality of mercy is not strain'd.
It droppeth as the gentle rain from heaven
Upon the place beneath. It is twice blest:
It blesseth him that gives, and him that takes.
'Tis mightiest in the mightiest; it becomes
The throned monarch better than his crown.
His sceptre shows the force of temporal power,
The attribute to awe and majesty,
Wherein doth sit the dread and fear of kings;
But mercy is above this sceptred sway;
It is enthroned in the heart of kings;
It is an attribute to God himself;
And earthly power doth then show likest God's
When mercy seasons justice.
Posted by Beach-Combing Magpie at Monday, December 20, 2010