Having repeatedly heard about Le Train Bleu restaurant in the English Sunday newspapers I finally gave in to curiosity and went to pay this renowned historical site a visit a few years ago. I certainly wasn't disappointed and have been back several times.

Most of the old European train stations are like vast cathedrals to19th century travel, with their huge vaulted glass expanses and ornate fretwork rising up above like neo-Gothic structures whilst their tracks stretch out before us like veins linked to new lives. However, it is perhaps rare to have an actual glimpse of these potential horizons, savour the mood of other landscapes far from the capital and to feel yourself transported in time and space whilst sedentary in the station itself...
Just above the central platforms of the Gare de Lyon, overlooking the activity and routine of travellers and strictly timetabled trains stands the unchanging Train Bleu.

Here, you are able to experience not only the majestic, sumptuous decor of turn-of-the-century Paris, crystalised and reflected all around you, but also to sample the azure horizons of the Train Bleu's destinations on the French Riviera.


And that's without mentioning the fact that you do so whilst eating and drinking exquisitely! This strange mixture of elements and extremes forms the magic of this establishment set in a listed monument and also makes Le Train Bleu unique since it is accessible to travellers or the general public alike - even those of more modest pretentions. 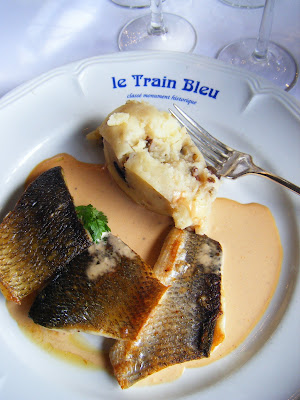 The Train Bleu restaurant as we know it today did not bear that name at its beginning in 1900. Initially it was rather modestly and unimaginatively known as the Buffet de la Gare de Lyon. However, the historical context  gives more insight to the decor of the restaurant than its original name on its conception under the Second Empire. 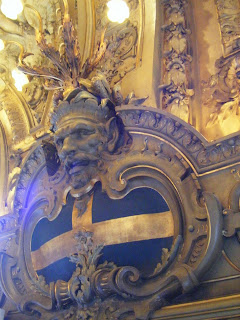 It was constructed for the Exposition Universelle, along with Le Grand and LePetit Palais, le Pont Alexandre, and was decorated in the lavish style of the Belle Epoque for the PLM - the railway company Paris-Lyon-Mediterranean. 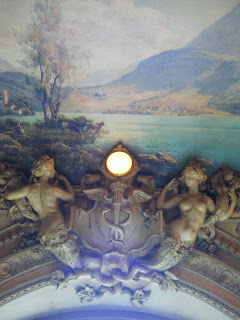 The decor is richly ornamented with gold stucco, beautiful crystal chandeliers and wide windows looking out onto the busy Parisian streets of the 12th arrondissement and the tracks themselves fanning out below and beyond the restaurant. The walls and ceilings are decorated with scenes from le Côte d'Azur, representing the play of southern light  which brings out the different colours of the sea and landscapes which offer a foretaste to the South-bound passengers and whetting the appetitite of the city-bound Parisian diners.

The restaurant is set out with original train features or elements that reflect those - from the leather banquettes to the brass luggage racks, however the final atmosphere is in no way cramped since the light-filled restaurant stretches out the full length of the station. 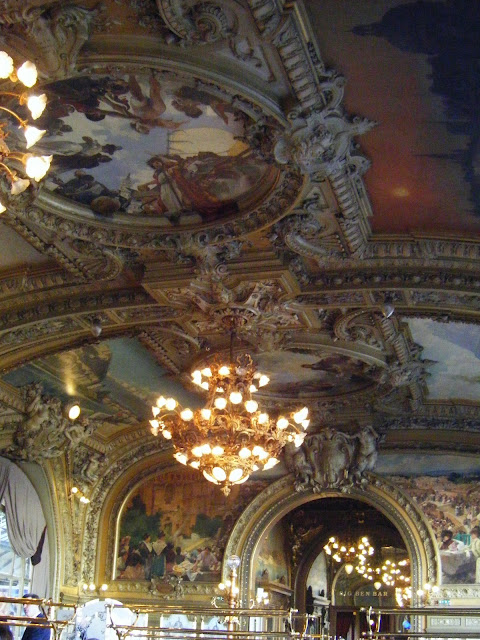 Indeed, on the far left-hand side as you enter the restaurant  is Le Big Ben café/Bar with its burgundy armchairs and rich curtains creating a relaxed atmosphere, a little like gentlemen's Victorian pubs.
The nearby restaurant toilets are an experience in themselves with their old original ceramics and tiles and a slightly more modern shoe-polishing machine.
At the other far extreme is the great buffet piece, mounted by a very proud golden French cockerel. This same Gallic pride is displayed by the in-house buffet cat who can be seen as he non-chalantly makes his rounds, observing the customers with insouciance, ignoring their advances and any petty notions of Health and Safety that seem to plague England.


I particularly like this more relaxed, tolerant attitude in such majestic surroundings and was delighted to see that one of the elegant, rather well-heeled diners had a small Daschund peeping out onto the table from behind her fur coat and a glass of champagne, which yapped discreetly at regular intervals!

As for the Train Bleu railway service itself, this was initially a luxury train launched in 1922 for a company of sleeper wagons from between Calais and Ventigmiglia. Just the names themselves conjure up the glow and Twenties glamour of the French Riviera - Marseille, Toulon, Saint Raphaël, Cannes, Juan-Les-Pins, Antibes, Nice, Monaco, Monte-Carlo, Menton and San Remo in Italy..... 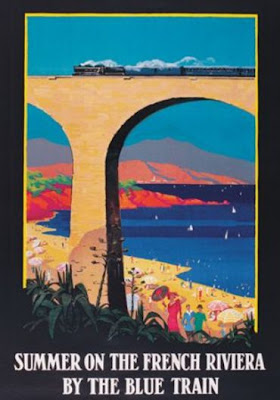 The train's name reflected the choice of colour for the decor of the carriages and it was a name that remained whilst the more elitist pretentions of the train did not. Although earlier passengers included Charlie Chaplin, Chanel, Winston Churchill  and Scott Fitzgerald, after the Great Depression of the 1930's there were fewer affluent passengers from America and England. When the Popular Front nationalised the train, second and third class travel was offered to French citizens of a more modest milieu. 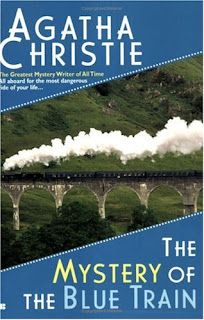 The last official Train Bleu ran in December 2007, however the line has been immortalized in various literary, musical and cinematic works -Agatha Christie's The Mystery of the Blue Train being just one such example.


Even if you can't visit the Train Bleu restaurant in person, you can always visit it on the official website - complete with a video.
http://www.le-train-bleu.com/fr/index.php
Another possibility is to watch the extract from the Mr Bean film - for although it may put you off eating oysters, it will nevertheless whet your appetite for a trip to this fantastic restaurant site which was officially recognized by André Malraux in 1972.
And finally here's a song by France Gall, Cézanne peint, to put a little sun into a cold winter's day.
http://www.youtube.com/watch?v=NkfLDwaEMrM