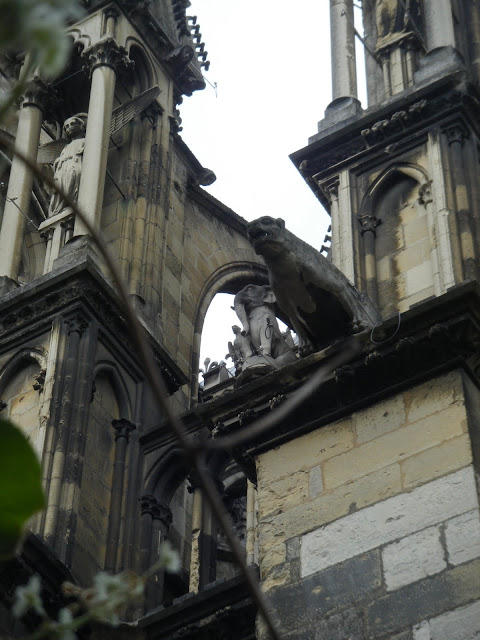 Actually tracking down the elusive elephant of Reims cathedral was quite a task a few years ago - it appeared to have been tucked away in a corner at the back of this very famous site. Trying to take a photo of this same elephant now is even harder because it's virtually inaccessible; a large spouting gargoyle almost blocks your field of vision, a wooden gate bars your way, and then finally the position assumed by the elephant doesn't immediately make you think of imposing pachyderms! This elephant seems to be sitting on its haunches like an obedient  performing animal, or rather like a modest household cat! While all kinds of exotic creatures, real & imaginary, decorate many of the Gothic cathedrals from this time, few of their sculptors had seen living specimens of the animals that made up this ecclesiastic menagerie, and so could be forgiven for a certain inaccuracy or artistic licence. In this  sculpted bestiary, each animal had its significance; the elephant symbolized chastity and self-control and the latter certainly seems to be reflected here!

In its Asian countries of origin, the elephant was a symbol of power and justice, and endowed peace and prosperity on those who possessed it. It was, and still is in countries such as Burma, highly treasured and coveted even. Even before Hinduism (with Ganesh) and Buddhism with their faith symbolized by the elephant, this creature was at the heart of animistic beliefs and was associated with life and growth. In the Buddhist faith the future mother of Siddharta, Queen Maya, was able to conceive once a white elephant had presented her with a lotus flower and "touched her with its trunk" during a dream; Buddha was born.


Centuries later, the veneration of the precious, rare white elephant continued. In the kingdom known as Siam, later Thailand, the white elephant was a treasured possession that was highly auspicious and so protected by sacred laws. In 1861 the King of Siam offered a white elephant to Abraham Lincoln during the American Civil war; this was politely declined. For others, refusing the gift of this unusual beast was impossible and the chosen individual was put in a difficult situation since the upkeep of the regal elephant was ruinous to those obliged to take up such a responsibility. The white elephant, with its sensitive skin (due to a recessive gene resulting in a lack of melatonin) was considered to require special treatment, while its regal position meant that this animal was lavished with every luxury. It could not be used as a beast of burden nor could it be sold, and should it die this was the omen for the approaching demise of king and country. The recipient of  such a venerable beast,  faced financial ruin and it is said that the king would give such a 'gift' to individuals who met his disapproval. Bankruptcy thus neutralized enemies and the king  found an efficient means of avoiding huge court expenses in passing this 'honour' to some hapless individual. And so therein lies the origin of the term 'white elephant' - an expensive yet worthless present. Until the beginning of the 20th century the Thai flag bore a white elephant on a red background...


In a Gothic elephant pose, with legs slightly banjo-shaped, is my Siamese cat who sadly died of old age, well before time and certainly well before I had a digital camera... The Siamese are just such affectionate pests - and I especially love that aspect about them, this 'naughty-but-nice' trait which is often misinterpreted by some, but duly appreciated by others. It is said that during the creation of Noah's ark, an ape fell in love with a lionness and the resulting offspring bore the "attributes of an ape and the bravery of the lion". The actual history of the Siamese cat is perhaps a little more refined than that.....

These particular felines were deemed precious creatures, doted with special powers and as such were sacred temple animals in Thailand, formerly Siam. Apparently these cats were used as venerated guardians in the ancient city of Ayudha, founded in 1356, capital of Siam until it was destroyed by fire during the Burmese invasion in 1767. The ownership of these cats was restricted to the Royal family or at least to a individaul of important descent, such as a knight or promoted to a high-ranking post as a noble. Simple commoners did not have this right and the theft of a cat from the Royal court could result in death.

It was believed that the Siamese would receive and transport the soul of important dead people and so after the death of a high-ranking individual the cat would subsequently be sent to a temple to live a live of luxury, high pomp and ceremony amongst monks. The best morsels of food would be offered on gold platters to the sacred cats, bearer of souls, provided, no doubt at great expense, by the mourning relatives.

The Siamese became known to the Western world towards the end of the 19th century. A certain Edward Gould, Consul-General in Bangkok brought a pair back to his sister in England. The kittens of these were later exhibited at Crystal Palace in 1885, leading to the introduction of this breed to the British public, who, as can be imagined, would have been greatly surprised and shocked in equal measure by the dazzling blue eyes and elongated forms. Around this same period a Siamese was presented as a gift to Mrs Hayes, the president's wife and consequently the Americans were able to hear of this breed originally known as the Royal Cat of Siam and with the development of photography images could be viewed, albeit in black and white...

The traditional Siamese appearance was modified over the following decades, leaving behind the rather rounded 'apple-head' form, and larger body frame to take on the unique, rather snaky, lithe appearance of the modern Siamese which was further exaggerated until there was a return to the more robust, often healthier shape. The genetic flaw of the original Siamese, giving rise to the kinked tail and squinted eyes, origin of many stories and legends, was also modified and lessened by selective breeding over the years. Likewise, the coat itself now presents itself in many beautiful shades - seal, blue, lilac, chocolate being just a few. Nevertheless the pointed pattern of the coat still retains its original characteristic wherein the fur is heat-sensitive on the cooler extremities of the body (the points) and will darken considerably in cold temperatures due the specific melanin production. The beautiful blue eyes are said to lack a structure which aides night vision and this would account for the fact that the Siamese tend to be less active at night in comparison to other breeds, generally preferring to be in bed with their masters and mistresses, all the more to our pleasure!

Anyone who has had the honour of owning a Siamese cat knows that, in fact, it is us mere humans who are owned, captivated by a humourous yet quite haughty feline friend, who gives dog-like devotion and companionship over the years.