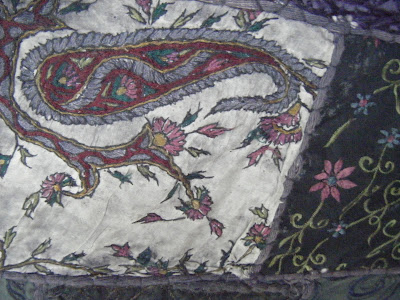 I love the colour of this piece of Indian needlework, so delicate and quite difficult to define, in fact rather like my faded dried hydrangea flowers or a very watered-down shade of the mauve flowers in the garden which seem to change depending on the light.

'Purple' seems to be a very general colour description since in reality one person's concept of this seems to differ greatly to another's, apparently due to the differences in retinal sensitivity in the human eye to red and blue light. Purple can therefore include a somewhat wide range of colours, a hue between violet and red, and  few people agree with what actually constitutes this. The names given to shades of 'purple' are lovely to simply read off... heliotrope, lilac, violet, pansy, lavender, orchid, mulberry & regalia are just a few.
Purple is wildly associated, historically speaking, with royalty and 'high office'. Certainly purple, deriving its name from Greek porphyra - the spiny murex whose secretions provided the dye, was only available to the very wealthy, from its very origins in classical antiquity. 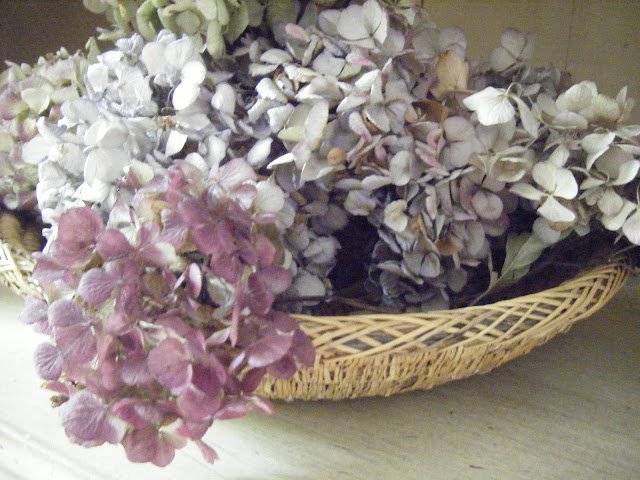 It wasn't until the 19th century that the colour mauve was to be introduced to Victorian society, and quickly made highly accessible, largely thanks to the Empress Eugenie, wife of Napoleon III of France who found that the colour matched the colour of her eyes and wanted a wardrobe to reflect this. Originally called 'Tyrian' purple by its young British inventor, it was soon labelled mauve by the French, after their name for the mallow plant. Perkin soon used the name mauveine since the French were admired for their sense of fashion and good taste and this provided an invaluable 'French touch'. Indeed, Mauve Mania was born... 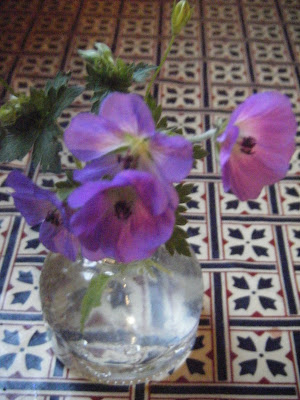 Until the middle of the century cloth had generally been dyed using plant extracts, however the colours obtained were neither vivid nor long-lasting. The accidental discovery of the 18-year-old William Perkin in 1856 transformed the dyeing industry with the introduction of artifcial colour to be manufactured on industrial scale. This was far from Perkin's origin aim, which was medical rather than aesthetic as it was in seeking to create artificial quinine as a cure for the malaria devastating the British troops in India that the young man stumbled across his revolutionary dye. The dark, oily substance, aniline, that Perkin produced during experimentation on coal tar stained his clothing a resilient purple colour and soon led him to patent the production process and set up a factory in London to manufacture the newly-discovered synthetic dye. The capital was soon taken over by mauve mania, with Charles Dickens commenting on it as he observed mauve garments and accessories worn by those "flying countryward, like so many migrating birds of purple paradise".

Although mauve was to become the acceptable colour for the transitional period of mourning (ie. the last six months of a two-year stretch), influenced by Queen Victoria herself, it was the symbol of opulence and as such was later associated with things rather louche and perhaps of free morals. In the Portrait of Dorian Grey, Oscar Wilde wrote, "Never trust a woman who wears mauve.... Whatever her age be...it always means they have history". No wonder I love mauve! Curiously, to describe an individual as 'mauviette' in French means that you find that person cowardly, spineless & lacking in character - 'yellow' - in short!
Posted by Beach-Combing Magpie at Tuesday, June 29, 2010