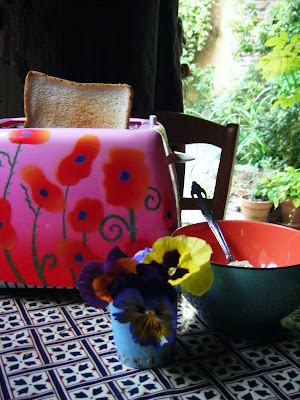 Woke up this morning to see that summer is finally here - the light has changed and so has temperature - dramatically! From my kitchen table I could see the turtle dove still brooding on the nest just outside the door, the honeysuckle on the far wall and my toast and porridge right next to me - with some pansies from the garden.

Pansies are such happy, resilient plants even surviving snowy conditions - these ones endured the cold winter months, and are only now starting to get long and leggy. They still smell beautiful, however, showing how they belong to the viola family and are, in fact sometimes known as the pansy violet. 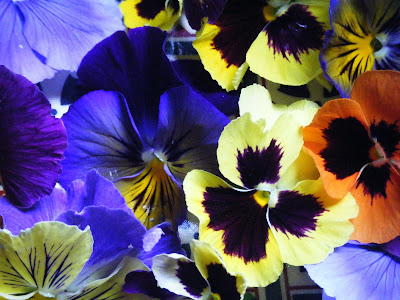 Apparently pansies, a hybrid plant, were developed in England in the 1830's, and were modified into every conceivable colour - even black and bi-coloured varieties, but nevertheless retaining their characteristic petal ' face'. Over the ages pansies have been associated with a reflective, contemplative quality - with their thoughtful faces and the manner in which the flowers lean forward in the summer, as if lost in contemplation. The pansy derives its name from the French word pensée, and it is floriographic meaning (the symbolic meaning of flowers) plays, not surprisingly on this aspect. According to the legend, the pansy was originally white but blushed bright purple when pierced by Cupid's arrow and ever since has carried the thoughts of loved ones. Indeed a gift of pansies shows that your beloved is always in your mind... Another name for the pansy is 'heartsease'. Shakespeare chose 'pansy juice' to  create a love potion in Midsummer night's Dream, and Ophelia used the pansy in Hamlet. 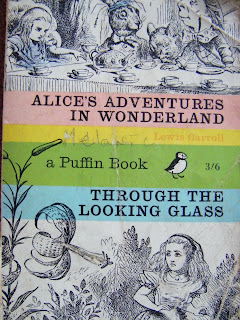 Pray you, love, remember.
And there is pansies,
That's for thoughts."


Alice in Through the Looking Glass was astounded to hear the tiger lily speaking, "And can all flowers talk?". Throughout the ages, the language of flowers has had great importance. Indeed, although generally associated with the Victorian fashion for exchanging sentiments through an elaborate and sometimes complicated floral 'code' - the language of flowers is said to have its origins in Persia and Turkey. In Paris, a the beginning of the 19th century, a certain Charlotte de la Tour wrote a flower dictionary, 'Le langage des Fleurs'. This contributed to the later fashion wherein the variety of flower selected, its colour, number of flowers used, arrangement and association with other blooms would convey a precise amourous message.

Posies, called 'tussie-mussies' were often used, although their use was often of a practical nature since their perfume could ward off unpleasant smells and the herbs frequently employed were thought to combat airborne illnesses.....

I prefer to just think of the amourous messages, especially on a day like this, with the smell of the honeysuckle all around - what a pity I can't put that on my blog!!!
Posted by Beach-Combing Magpie at Wednesday, June 23, 2010