All dried up & twisted! 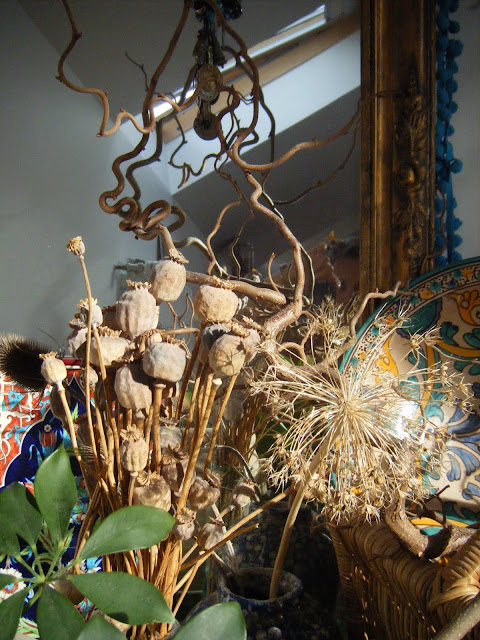 Despite it being summer, it's too damp and certainly not warm enough to tempt me out so here I am looking at the various objects around the room.... A mixed collection of dried and twisted objects, mineral and otherwise, amongst them the old favourites of ornamental garlic, poppies heads and twisted hazelnut branches...
While I have no interest in trying any opium deratives myself, I find the history of opium interesting in itself, if not pretty devastating... Apparently the German pharmacist Sertürner was the first to isolate pure morphine from opium in 1817 and deserved the title of 'father of alkaloid chemistry'. Indeed, he recognised the analgesic and euphoric effects of the substance derived from the poppy, yet it took longer to establish the physiological addiction it gave rise to. The compound was named Morphium after Morpheus the Greek god of dreams, and in the Victorian period it was taken in significant amounts by a significant proportion of the population without initially inciting the opprobium reserved for alcohol by the temperance groups. In medical preparations, this was admininstered to adults and children alike, while even Marx remarked on this English tendancy to give babies opium. Its capacity to induce vivid dreams, and trance-like states was soon to give rise to a recreational use of the substance, and not surprisingly, at this time it began to take on a more clandestine identity and this led to the opening of opium dens.
There were many famous users and abusers of opium-derivatives in the latter part of the 19th century, one of the most common ways of taking the drug being in the form of laudanum. There are many references to laudanum in literature of the period and indeed many writers, such as Wilkie Collins were addicted to it, and perhaps depended on its muse-like qualities in the creative process. Lewis Carroll not only took opium, but seems to allude to it with his hookah-puffing caterpillar "You are old, Father William..." in Alice's Adventures in Wonderland.
Women were frequent suffers of narcotic addiction as it was often given as a remedy for 'feminine complaints', and it also had the advantage of giving the taker a palid complexion - a vital asset to woman aspiring to look 'pale and interesting'. Lizzie Siddal, Rossetti's muse and mistress, became one of more famous female addicts, due to the Pre-Raphaelite Millais' depiction of her as Ophelia, but the writer Elizabeth Barratt Browning was equally dependent on her daily intake.
Many medicinal products of the time were conserved in glass bottles - and at this time the distinctive Victorian poison bottles were developed. These had the aim of reducing accidental deaths due to the confusing of substances by an often illiterate public, unable to read the labels and the appropriate warnings.... But that will be a tale for another evening....
Posted by Beach-Combing Magpie at Saturday, June 19, 2010