Well, it's the summer solstice today, supposedly with the longest amount of daylight, but it certainly isn't summer in terms of temperature! 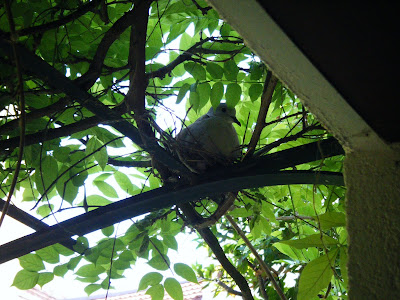 However, while working from the kitchen table the other day I looked into the garden and noticed that we now have two visitors who have taken up residence in the wisteria now that the flowers have gone....A pair of collared doves. Their plumage is a pale pink-ish grey, with the distinctive black half-collar on the neck (apparently only on adult birds), the beak is black and the eyes, from this distance, seem very black and beady, but in fact the iris of the eye is apparently a dark amber red, surrounded by a white ring. I say at this distance because since their arrival I have avoided disturbing them by going into garden yet they seem to follow my movements warily as I work and sit stock-still when they think I pose a threat. The nest looks very precarious balanced between the metal slats of the wisteria tunnel as it is basically just a collection of twigs that somehow manages to support the two white eggs and the parent bird. You can just make out one of the birds peeping out at me spying on it in the photo above!

Apparently the parent birds both cover the nest - the female during the night, the male in the daytime and the couple, like many birds, remain together for life. These eggs then should hatch in fortnight's time; this particular type of bird is able to lay eggs every month of the year - helped by the feeding process which doesn't depend on insect-based diet provided by the adults, but on the parents' production of 'pigeon's milk' or 'crop milk', which both male and female give to their young (known as 'squabs'). This civilized system perhaps explains why the collared dove managed to grow significantly in numbers and expand its territory from Asia Minor, via the Balkans, to all over Europe from the latter part of the 19th century. Incidentally in French the collared dove is known as the tourterelle turque....

Whatever the origins, my two collared doves are providing a welcome distraction and animation with their cooing and the funny whishing noise their wings make in flight. 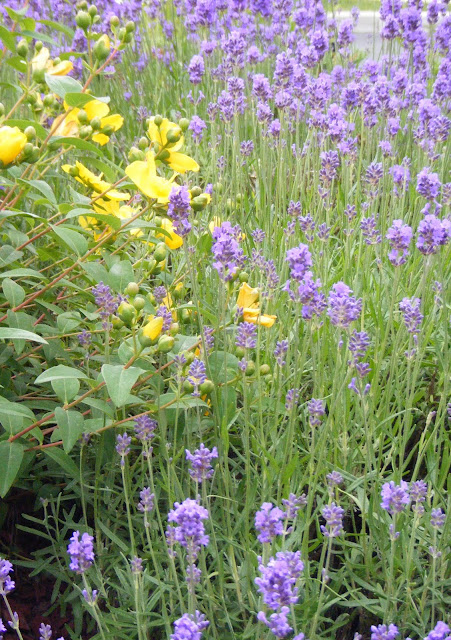 On my way back from work I came across this lavender but wondered where all the bumblebees were!
Posted by Beach-Combing Magpie at Monday, June 21, 2010