In the Company of Unreal Creatures - La Compagnie Créature 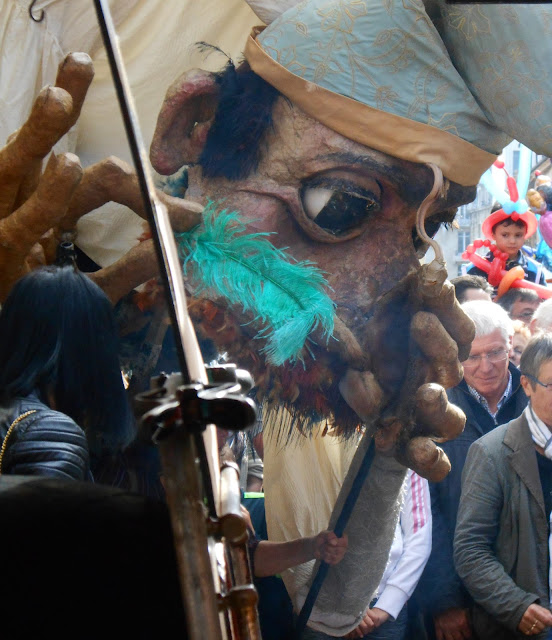 In September I went back to see the Charleville-Mézières Puppet Festival... Festival Mondial des Théâtres de Marionnettes, which is held in the town every two years. My first visit was in 2011 and I vowed then that I'd return. During each festival, all the streets radiating out from the vast central square - la Place Ducale - are overtaken by all kinds of performers and performances, of all nationalities. 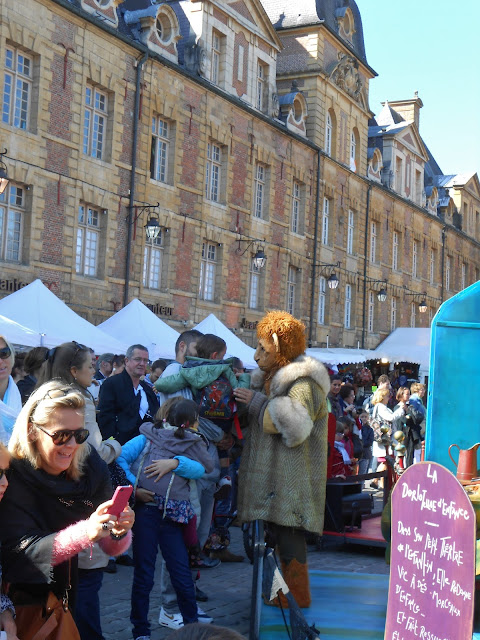 This year was no different, except that one group of performers had taken centre stage in Place Ducale and seemed to be the focal point to all the activity in the square. Compagnie Créature had mounted 15 theatrical 'sets' in an oval formation. Each of these had its own individual theme, yet remained closely linked to all the others to reveal the universe of Les Irréels. This was indeed a strange parallel world, populated by imaginary creatures that were half-beast, half man, yet did not seem to step from ancient mythology or from feel-good anthropomorphism. Sometimes the creatures could be related to a species of the animal kingdom, but this was not always so.... 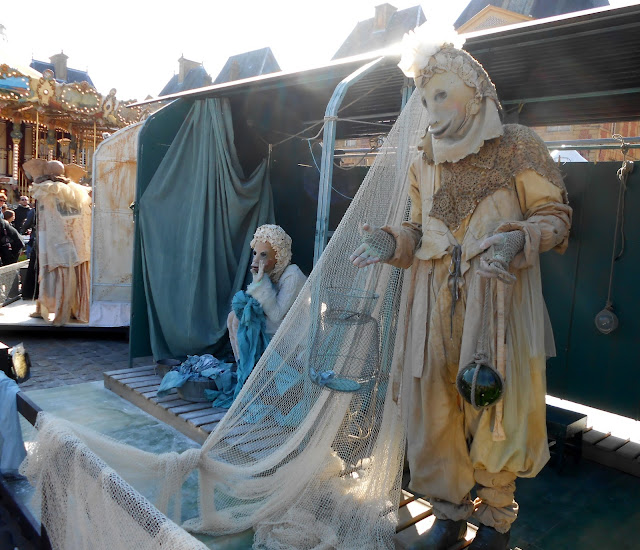 Certainly, there were a great deal of children in the crowds that amassed in front of each 'performance', but in fact Les Irréels seemed to address the infant in every person, regardless of age. It made the adults question all that separates the grown-up world of certitudes from that of childhood trust in make-believe and possibility. Although the majority of the children understood that the creatures were not 'real', the silence and tranquility of these strange beasts gave them a nobility and grace that made them want to interact. These were not marionnettes, but were performers in elaborate costume and facial masks, but that basic fact was soon forgotten due to the mesmerizing effect. 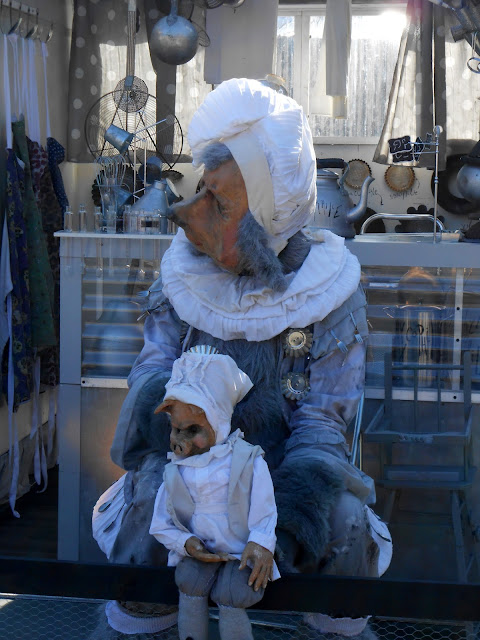 As the creatures busied themselves with their given occupation they drew in an audience fascinated by this odd spectacle of different characters, all inciting varying reactions and emotions. The performance flows over time - literally hours - there is no beginning or end for this is no scripted show; the creatures simply get on with their allotted tasks but are ever-attentive to the audience. Had Les Irréels been upfront and chatty, the spell would probably have been broken. As it was, the lack of words created an incredible proximity and communication with the audience. The reactions of the children were very touching to watch as they interacted as they could, totally absorbed in the whole event. 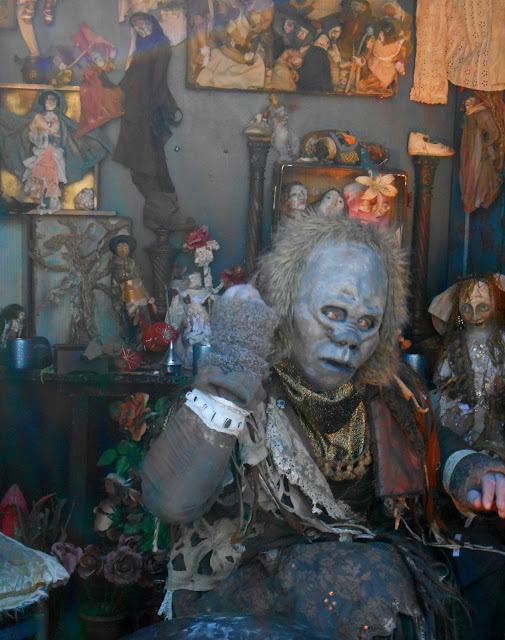 They were in turns a little intimidated by the grandeur of these beasts, rather frightened of some forms and features (and not without reason!) and just in awe and admiration of others. But however they felt, they went up to the creatures to try to speak to them. 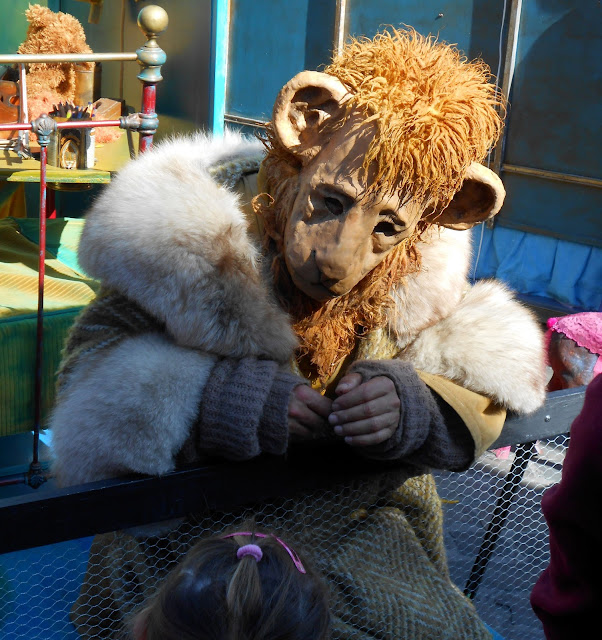 Apparently, the initial aims of the founders of Compagnie Créature was to create a theatrical universe that presents the youngest public with universal, timeless themes that may often seem difficult or too sensitive to approach. Through a world of poetry, gesture and mime, the audience is led by the imaginary to think about the real world around them and find the humane/human therein. The dramatic art here brings us face to face with the dramas that punctuate our lives, and accompanies us as we do so, with warmth, peace and tranquility. 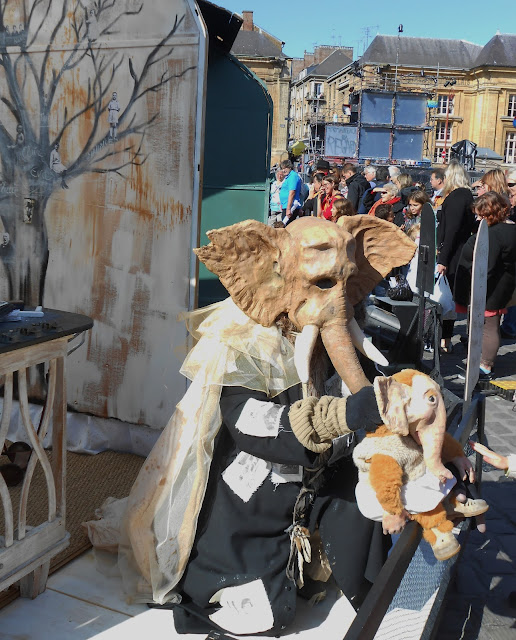 The theatrical artifice of the Irréels seems to bring out the realities of human existence, stripping away the layers of adult 'truths' that cover up reality with a child-like candour. Compagnie Créature was founded at Blagnac, near Toulouse in 1990 by a couple dedicated to the universe of the theatre, the plastic arts and puppetry. It is the daughter of Michel Broquin and Odile Brisset, Lou Broquin, who conceived and leads the project of les Irréels, accompanied by her mother, sisters and an expanding group of fellow performers. 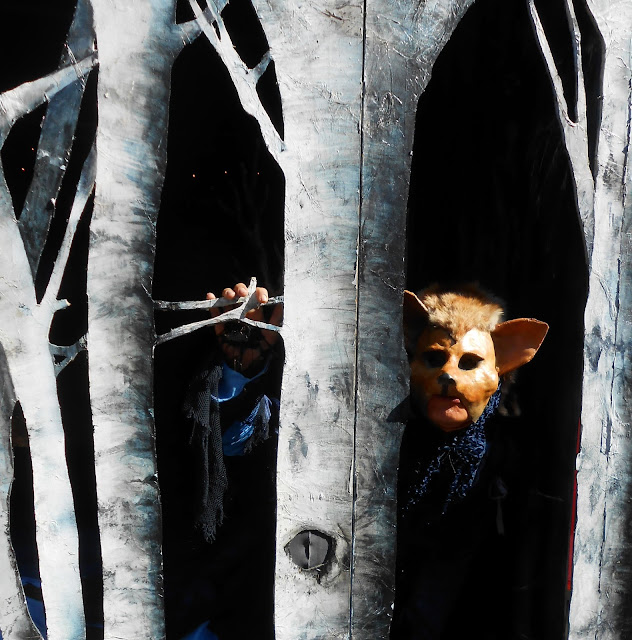 There are 15 themes in the Irréels, each explored by a different identity, set within a unique backdrop, rich in colour, density of detail and heavy in symbolism. The symbolic does not, however, have a stifling, stuffy weight; each theme is intricate yet simple, like a carefully woven cloth that invites you to touch and examine it to see just how it 'works'. Just as these creatures are not some cozy, crazy modern twist on Beatrix Potter's characters, the role of each of these imaginary beasts responds to a very real need in our universe. 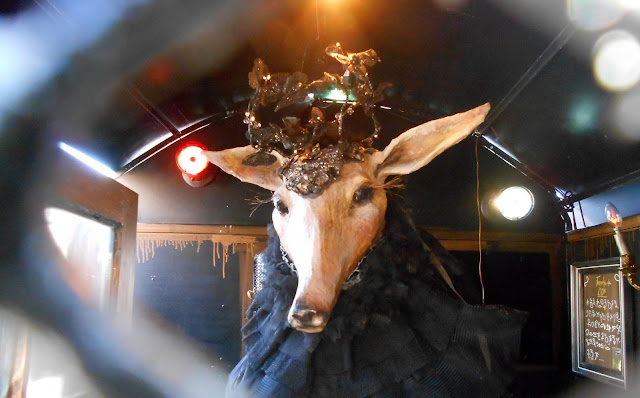 In front of each set, the title of each hybrid beast is clearly stated, along with its 'role' in the bigger picture. Yet these are not simply 'explanations' for the benefit of the younger public; they are addressed to us all, so that we may ponder over our own fears, hopes, losses and loves. How do our lives 'work' and what would Life be like if the Irréels really could work their magic in the real world. What separates this imaginary universe from ours? Childhood from adulthood? 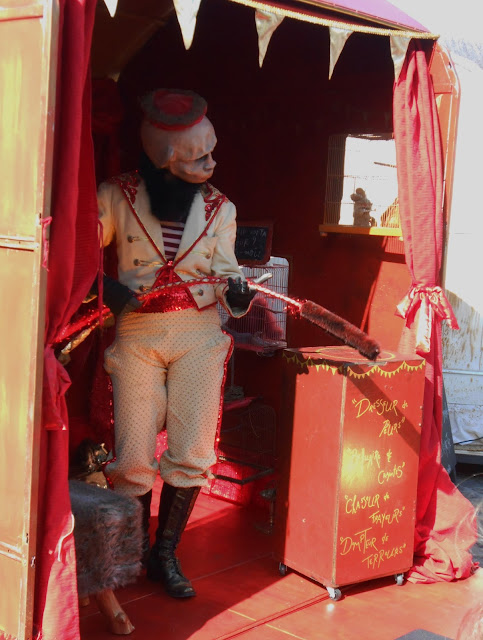 There was no fixed beginning or end to the collection of sets and many people seemed to go back to look at these again and again as the magical combination of simplicity, serenity and sophistication took its grip.

One of the first I encountered was the Dorloteuse d'Enfance - The Pamperer of Childhood - whose role, as stated on the sign in a rather more poetic French, is " to give life back to the scraps of childhood years and to make our past states re-emerge in the present"... 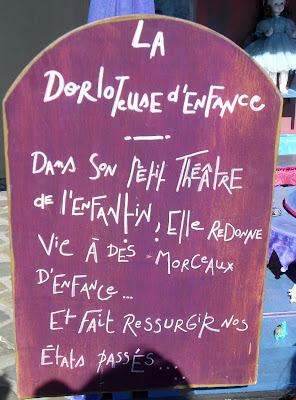 Her set is appropriately crowded with the bric à brac of childhood -  old toys and games . The soft nursery colours, just like the Dorloteuse herself, are warm and comforting. The same impression was given by the Réchauffeuse d'Hivers - The Warmer of Winters -  a sleek, feline figure who the children gladly approached...

Her role is "to knit hope in order to heat our cold interiors" - both material and emotional - with her gentle demeanor and her numerous spools of thread, spindles of yarn and balls of wool that fill her set. She 'tucks in' her audience with her soft blankets and warm throws in order to get them through the harsh, wintery moments of Life. 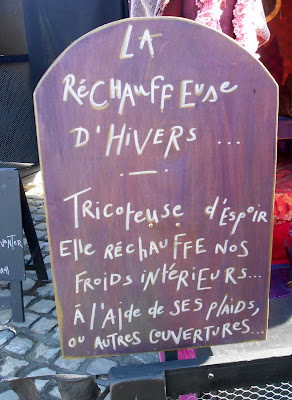 In the same vein, but on a more personal level, the Raccomodeuse de Coeurs - the Mender of Hearts  - welcomes her public as she busies herself with her numerous tasks in her colourful space...

As excellent seamstress, the Raccomodeuse sews up bruised and broken hearts, darning frayed sentiments and repairing the weakened stitches in love stories... 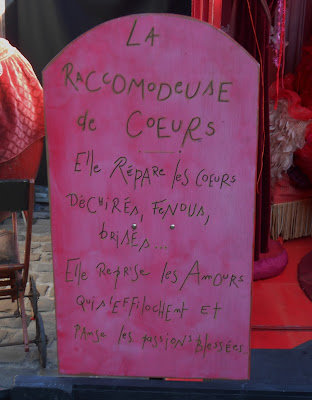 The Raccomodeuse de Coeurs is accompanied by the Brodeuse d'Amour who brings Love back to life in our own lives through her bright sequins, ribbons and pearls...

The incredible vibrancy and openness of this scene is offset by the closed, shady environment of the Veilleuse de Mystères...


Inside her hut, the Veilleuse - or the Guardian of Mystery - is barely visible beyond the peepholes, her slow, shrouded movements are just perceptible. We catch a tantalizing glimpse as she turns... 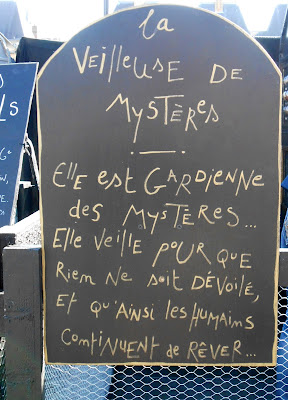 She assures that the mysteries of Life remain intact, safe from the ravages of logical vision that rationalizes everything away to produce the plain, palatable blandness that is often associated with the world of adults.

With a similar desire, the Berceuse de Secrets - the Lullaby-Singer of Secrets - endeavours to soothe and protect our innermost secrets. 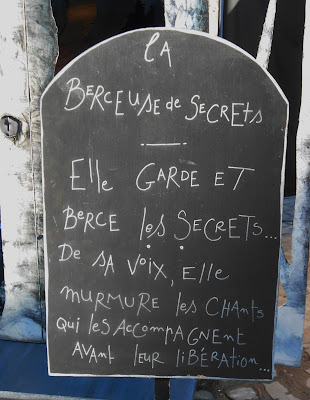 With her soft, discreet melodies she incubates these secrets in the depths of her wooded environment, right up their their liberation...

In his lair, the Accompagnateur d'Absents cut an eerie figure that seemed to inhabit the dark, dank corners of a mythological underworld... 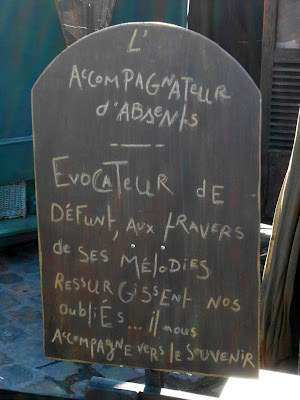 Despite evoking the dead, his purpose is reanimate their living memories in us through his music. Likewise, the Rafistoleur de Mémoire - the Mender of Memory - works on the elements of life that have slipped into oblivion yet need to be restored in a mindful present.

The Mender seeks to patch up our memories of the past and like an archeologist he will piece these together again, so that they are no longer forgotten, buried under the weight of time. His hut is full of the artifacts that make up the scrapbook of our existence. Just as an elephant never forgets, his role is to ensure that we no longer do so either... 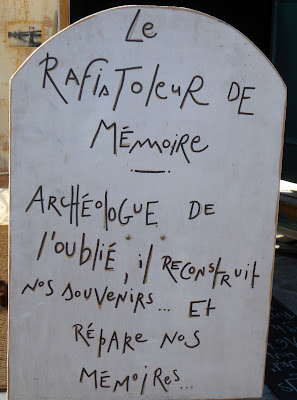 In order to wash out or water down any moments that may soil or sour a pristence, sweet existence, the Lessiveuse de Malheurs - the Washwoman of Woes and Misfortunes - offers her services...

The washerwoman flushes out sadness, and removes the greyness and grime that may dullen our lives. Her cleansing provides the brightness and freshness usually associated with childhood. 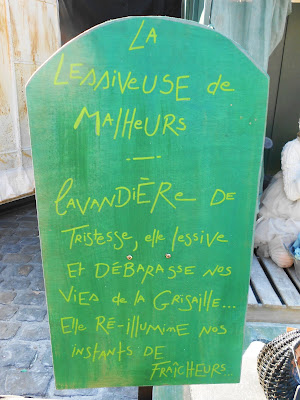 Toiling beside the Washerwoman was the Pêcheur d'Espoir  -  the Fisherman of Hope - who indeed resembles an amphibious creature, with his mud-coloured clothing and fishing equipment.

His role is simply to catch Hope and return it to the world so that we regain faith in the idea that everything is possible. 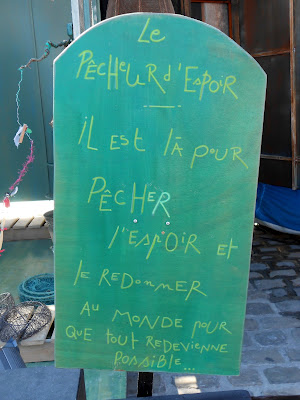 So that we may advance freely with open minds, fed on curiosity and eagerness, the Marmiton de Passion is there to accompany us with his recipes....

This Kitchen-Hand in Passion is ready to cook up concoctions that will fill us with enthusiasm for numerous things, thus liberating us from doubt or hesitation. 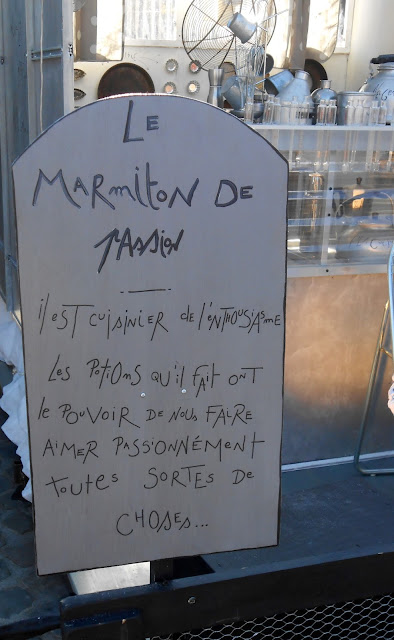 So that we can follow our path in life in good company, the Tisseuse de Liens - the Weaver of Relations uses her needlework skills to bring people together...

Once the Weaver's work is done, the Traceuse de Chemins - the Path Setter - will trace out the paths that we will tread together... 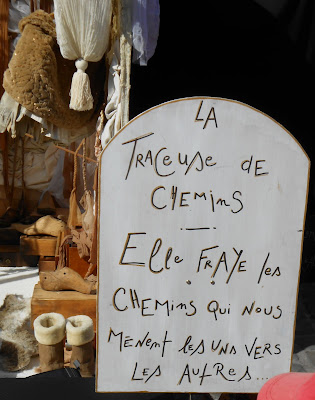 The Rêveur d'Amis Imaginaires - the Dreamer of Imaginary Friends -  will ensure our journey in life is not a solitary one.

His role, as stated on the sign is "to dream, invent and draw the friends that populate his spirit, before they go on to join Humans"... 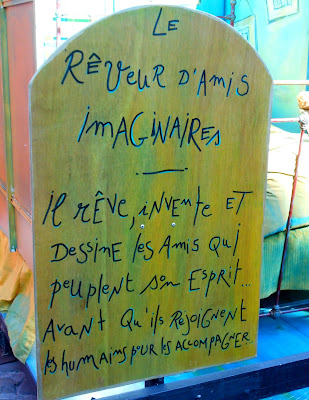 But to be truly free in life, we need the services of the Chasseur de Terreurs who will help us tame our innermost fears and train our unwieldy trepidation...

The Tamer of Terror will enable us to perform in the theatre of our lives, as bold actors not passive extras. 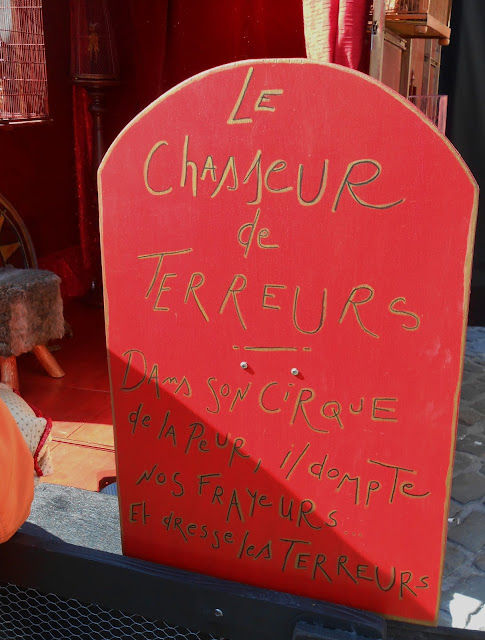 It was interesting to see how the children reacted to the imposing form and impressive facial expression of the Tamer.... But curiosity took the upperhand, and the Irréels had operated their magic.

From tomorrow - Christmas Day no less - the Compagnie Créature will be in Seville, Spain. What a great Christmas present for the locals!