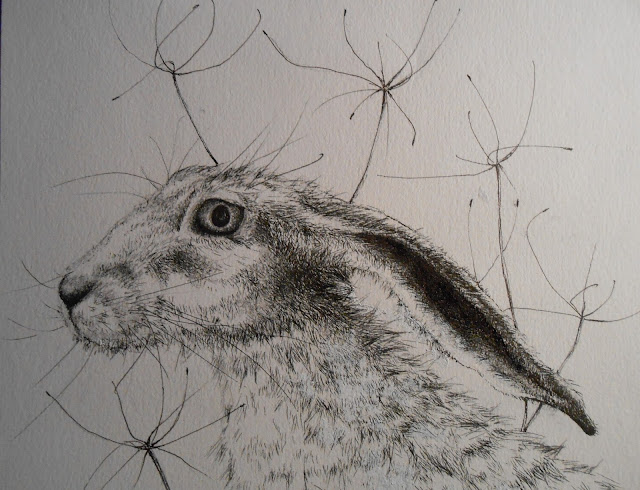 The other day, I was listening to one of my favourite 'Christmas' songs - Gaudete sung by Steeleye Span - coined an 'Electric Beard' group, stylistically-speaking! That led onto the Mooncoin Jig, that was so infectious that it actually led me to grab my son for dance around the living room. I don't know which was the bigger achievement - dancing around on a Monday morning before work or getting a teenager to attempt it.

I then came across the beautiful recording The Fabled Hare by Maddy Prior - the female singer of Steeleye Span. She has a truly magical voice. In fact, her whole (ongoing) career seems so rich as she is interested in many different artistic projects that appear to focus around Stones Barn.

So, The Fabled Hare made me want to draw a hare of my own. These strange creatures have fascinated Man throughout History, and continue to do so, though not generally to the Hare's advantage...

I haven't drawn anything in years, so it was a bit of a hit-and-miss affair, and now that it's supposed to be finished, I can see what needs redoing on my anatomically-challenged hare! Nevertheless, it was still good to use an ink pen for something other than marking essays, exams and the like. My video took far longer to put together than the actual drawing, but I wanted something to accompany the music... The final version is only part of the original song, which is some 9 mins in length.

I recently found a newspaper article that I had kept, concerning the 2012 Victoria and Albert Museum exhibition of Kit Williams' work Masquerade, when the elusive hare amulet finally went on public display. The very story of the amulet itself seems to be like some kind of fable - showing the beauty, creativity and greed that is in all of us - just in different measures, presumably. Apparently, the current owner lives in the Far East, and wears the marvelous necklace each Christmas...

Email ThisBlogThis!Share to TwitterShare to FacebookShare to Pinterest
Labels: Animals in Art, Hares