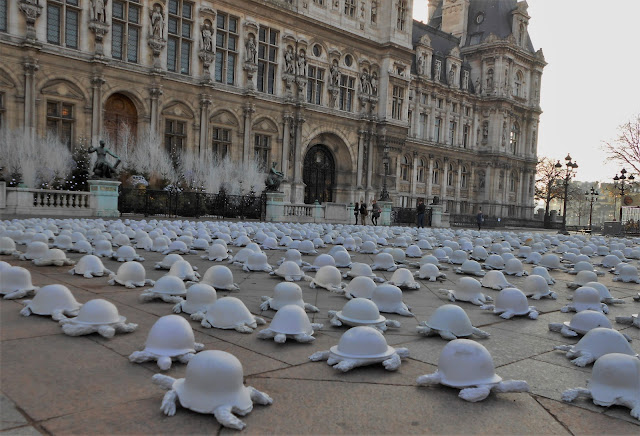 On Saturday a vast squadron of helmetted soldiers emerged from stacks of blue crates, to form an 'ephemeral installation' just in front of the Hôtel de Ville in Paris. A growing number of white resine turtles quietly spread themselves out over the sea of paving stones in front of the historic building. The manoeuvre was organised and orchestrated by the artistic creator, Rachid Khimoune, who went on to explain the aim of his project; the peaceful 'military' demonstration of the need for Peace. Indeed, his turtles are made from moulds taken of old war helmets that he had come across in flea markets, In this manner, the evocative forms of protective headgear from former enemy armies - U.S, French, German, Russian - have been brought together as a united front to make a stand against ongoing wars around the world. As the artist rightfully pointed out, after each atrocity carried out in the name of one vision /worldview or another, we hurry to utter the words "Never again" , and "Lest we forget", and yet suffering emerges again and again, in cyclical waves. 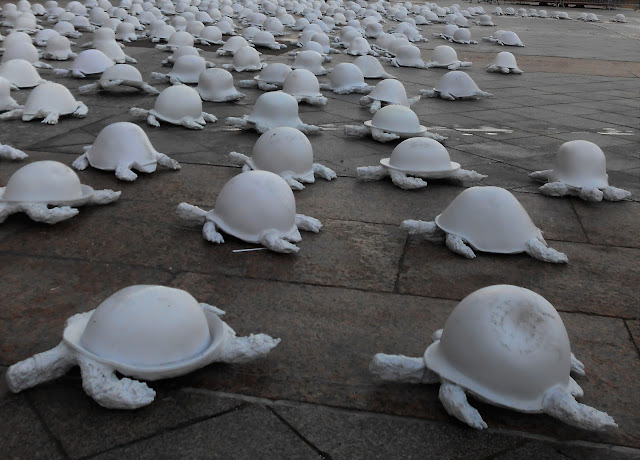 A mythological symbol of wisdom and humanity, the turtle also follows a cyclical movement; that of its evolutionary destiny. Each spring, it returns to reproduce, tracing a path with calm determination, driven by its vital role in the survival of its species, despite any obstacle encountered. Not surprisingly, the turtle is a totem for many peoples around the world as it connects the elements of water and earth, harmonizing the Past, Present and Future. Serenely carrying the world on its back in perfect equilibrium, the turtle is often thought to be the symbol of Mother Earth herself, with a feminine energy that leads to creation and Peace. Chasing away evil spirits and malefic forces, it is even less surprising that the poor creature has been routinely sacrificed for the restorative and protective capacities of its vital organs. It is now sought after for the 'cool' factor it bestows the tourist selfie.

Rachid Khimoune's One Thousand Turtles of Peace have frequently disembarked on symbolic shores - the most notable perhaps being Omaha Beach in Normandy, site of the D-Day landings in the Second World War. They have also made dramatic appearances in front of the Trocadéro (Paris), Fontainebleau and the Château de la Celle Saint-Cloud. For the artist , the very word tortue is highly evocative, conjuring up those of "tort, tue, torture" (wrong, killing, torture), and yet here the turtles summon a call for reflection and, ultimately, a call for Peace.
The artist was born in France in 1953, graduating from the l'Ecole Supérieure des Beaux-Arts de Paris in 1974. Gradually moving from painting towards sculpture, his work seems to be inspired by the magic and vital energy that is all around us and yet we often fail to see, and this inspiration is certainly drawn from his Berbère roots of North Africa. His bestiary of animal sculptures are fantastic and yet all-so-familiar as they are composed of the detritus of our daily lives. Bringing together past and present, his work provides us with a new way of seeing ourselves and the world about us, and hopefully the means to make a change in the future. He became Chevalier de la Légion d'Honneur in 2007 and has had exhibitions of his work all over the world.
Posted by Beach-Combing Magpie at Tuesday, December 22, 2015