The Lady and The Unicorn - Musée de Cluny


I recently went back to one of my favourite places in Paris; le Musée de Cluny. I finally saw the newly finished entrance and reception area that are able to cater to the needs of a wide range of visitors and therefore meet the demand for accessibility for all.

There were certainly many people queuing to enter – far more than I can recall when the public were plunged into one of the last vestiges of medieval Paris the moment they had purchased their ticket in the former hôtel particulier.
The edifice had originally been constructed to house the abbots of Cluny at the end of the 15th century, thus bridging the Gothic and Renaissance period. Needless to say, it was ill-adapted to hosting visits some 6OO years later and some modernisation work was vital.

However, I was very sad to see that a hideous bronze carapace has defaced the site outside. Inside, ugly modern functionality seems to have taken precedence over any attempt at aesthetic harmonisation and has obliterated the calm, unique atmosphere of the setting.

Climbing the new steps, my heart sank; I could have been in the atrium of any other uninspiring 21st century building, that probably will not make 60 years, let alone 600. Nothing I laid my eyes upon appeared even vaguely noble, attractive, lovingly or artfully crafted, but then that’s my opinion. I couldn't face including a photo here.

Now, at least, absolutely anybody can enjoy the treasures of Musée de Cluny and one of the most renowned of these must surely be the tapestries of the Late Middle Ages, La Dame à la Licorne. Having been cleaned and restored in 2012 – requiring some 2,3OO hours of painstaking work – the six tapestries are now hung on flat wall surfaces, as opposed to the curved forms in the old arrangement. Furthermore, visitors are now able to take photos, without flash, and so can prolong the pleasure of seeing these magnificent works after the initial visit.

With the multitude of details that feature in all six pieces, it is a privilege to pour over these at leisure – discovering new aspects and trying to find their symbolic meaning within the whole or simply appreciating the fine observations.

These tapestries stem from the long-established custom of suspending vast wall hangings to provide insulation in cold, draughty buildings such as castles and churches, in addition to offering rich illustrations of stories, fables, myths, moralistic tales of religious and/or historical significance.

Whilst such works were once the preserve of royalty and the church, in Gothic and Renaissance times these tapestries, art forms in their own right, were used by the nobility and the merchant classes too in order to express both material wealth and personal values to affirm status. The Lady and the Unicorn collection is thought to have been a private commission, simply intended for display to the select few, and without a direct ecclesiastic function. 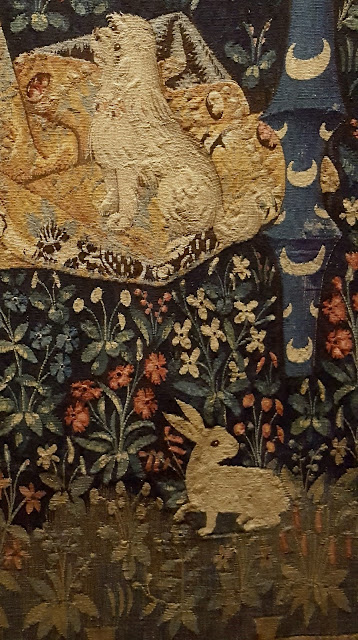 The Unicorn tapestries here display many of the characteristics of other works of the same period – both in France and in the southern Netherlands, with special attention given to foliage, fruits, flowers, animals and the feminine form. A millefleur background, with its profusion of delicate intricate flora and fauna, was common from end of the 15th century, but was rarely of a red colour as is the case here. 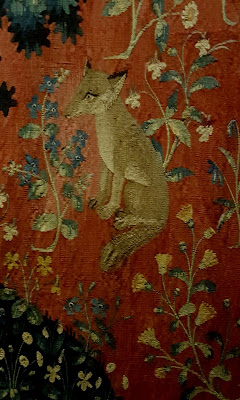 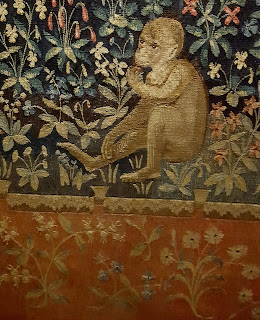 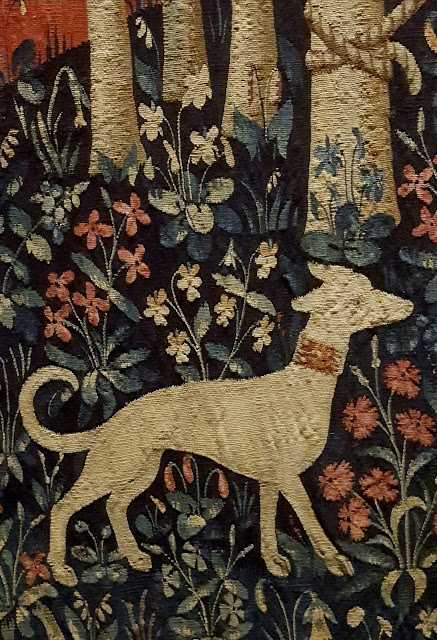 The body language and quizzical regards of all these creatures seem to be so familiar to any viewer today, despite the centuries that separate us from them.

The unicorn and a banner-bearing lion take centre stage alongside their lady. Both beasts were often used in common imagery. The mythical figure of the unicorn was frequently used in allegorical representations from antiquity onwards, lending itself to different symbolic interpretations; purety, chastity, Christ, the Virgin Mary, untamed nature, ferocity. The exact meaning of the unicorn’s role in the Cluny tapestries is unclear, as is the final message conveyed by the overall work. Nevertheless, the core theme of the Senses is manifest throughout each separate tapestry.

The symbolic importance of the five senses was not the preserve of the Middle Ages nor solely of the Christian faith. It was, in fact, part of a philosophical tradition with roots in classical thought from Antiquity. The Greek philosophers Aristotle (384-322 BC) and Galenus (129-200), had long before developed their theories of perception and intelligence. Later, the ‘father of modern medicine’ the Persian physician and philosopher Avicenna (980 – 1037) had argued that just as there are the five external senses—vision, hearing, touch, taste, and smell—so there were five internal senses; common sense, retentive imagination, compositive imagination, estimative power, and memory.

Virtue and perfection could be reached through the appropriate use of the bodily senses, leading to an understanding of God, which was the highest level of knowledge, and the attainment of the righteous self and soul. In this manner, to the learned and clerical body of the Middle Ages and the early Renaissance, the five senses were the connecting link between human form and soul.


The external senses could thus represent the keys to unlock the door to Knowledge or could, conversely, obstruct this entrance by acting as tempting lures to sin and damnation. With their unique power to sweep the being to a higher, spiritual level, or plunge him into an abyss, the senses needed to navigated carefully. It was deemed that the senses were not of equal importance and as such, should be classified in accordance with an established hierarchy to guide the individual through this perillous terrain. There were numerous reminders of such dangers. Representations of the Seven Deadly Sins were widely available - pride, greed, lust, envy, gluttony, wrath and sloth were portrayed in order to warn the weak of such peril.


The five senses were thought to correspond to the four elements. In this framework, earth was correlated to touch; water to taste; air – smell and hearing; fire – sight. Touch was considered to be the lowest, basest sense that was integral to the carnal, physical world. Likewise, taste could lead to sinful pleasure. Smell, however, pointed towards the spiritual over the material as it stimulated the imagination, whilst sight and hearing were the noblest senses that marked the transition towards a transcendental realm and the Divine. The ability to see and hear, the highest gift, was vital to learning, contemplation and knowledge (interestingly, encyclopedias were often referred to as ‘mirrors’).

A harmony of the senses could enable the soul to free itself from its base constraints, to transcend an animalistic state. Indeed, at the very top of the hierarchy was the sixth sense – governed by the heart. Unlike the lesser senses, that lead outward onto the material world, the sixth sense offered a profound, interior meaning and understanding ; spiritual love. The Italian philosopher, Ficino (1433-1499) argued that Reason was indeed the sixth sense and was set in the heart. Likewise, the French scholar Jean Gerson (1363-1429) cited the heart as the only inner sense « Et je parlerai des six sens, cinq dehors et un dedans qui est le cœur ».

The themes of temptation and redemption, linked to the senses and and their bodily organs, were primarily spiritual concerns. Nevertheless they were also associated with notions of courtly love in the 12th century and were treated in secular, allegorical representations too. The Lady and the Unicorn, is a case in point as the beautifully attired, noble lady attends to occupations or rituals that exemplify the power of touch, taste, smell, hearing and sight in this jardin d’amour. The scenes appear to demonstrate acts of preparation for love, and to lead to the final tapestry.

This piece,‘A Mon Seul Désir, seems to play on a certain ambiguity. Is this woman preparing for her chivalrous knight-errant or getting ready to renounce this world of earthly pleasures for the spiritual ? Is she awaiting the purity of amour courtois or the pure love of God? There are references to quests and hunting (the birds of prey and dogs), power and domination (the lion), virginity and innocence (the unicorn). Viewers from the Middle Ages would have been fully acquainted with such symbols since Medieval bestiaries traditionally linked the quirks and failings of the animal kingdom to reflect the weaknesses of the human one. 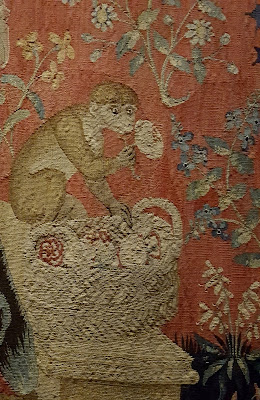 Here, the monkey mimics some of the gestures of his mistress as it eats in Taste, and sniffs a rose in Smell. whilst the unicorn gazes at itself in a mirror in Sight. In the sixth tapestry, A Mon Seul Désir, the lion and unicorn hold open the awning for their lady as she prepares to leave their company. Whilst the first tapestry, Touch, sees her and the beasts around her tied and chained to material objects – perhaps governed and grounded by lesser instincts – in the final tapestry she seems to hand over her jewellery and thus free herself of material wealth. 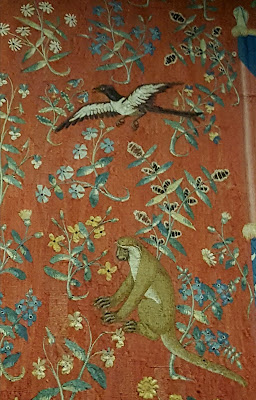 No one will know the definitive meaning of the Lady and the Unicorn, if indeed there is just one. However, far more people will now be able to observe the work and try to come to their own conclusions – or simply enjoy it for its own sake, as a beautiful piece of art. 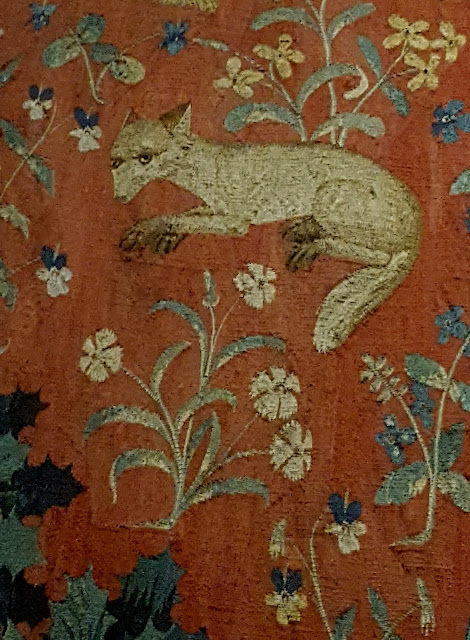 When I was there, an old couple were visiting, commenting in great detail on the tapestries that were on display. They seemed to take real pleasure observing and discussing the work and that added to my pleasure as I eavesdropped on the talk. Monsieur was in a wheelchair, pushed around by his wife, but were able to move around the exhibition rooms relatively freely, something that would have been most problematic a few years ago. 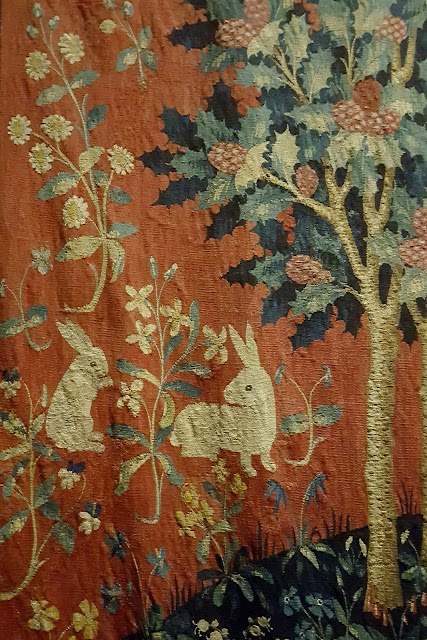 Mind you, I still can’t help but miss the old entrance to the museum, at the heart of the ancient courtyard, with the rich architecture towering above, where you stepped out of the streets of 21st century Paris into the Middle Ages.