The Rood Screen at St Etienne-du-Mont in Paris... 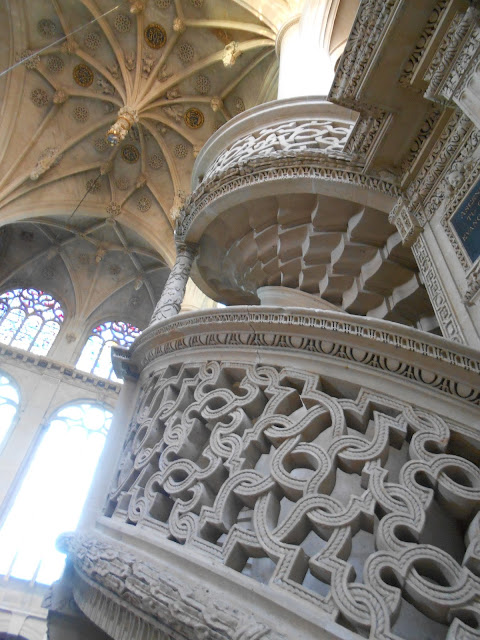 As I had the opportunity to go to Paris for a very fleeting afternoon visit, I decided to see the church of St Etienne-du-Mont, whose rood screen is one of the very few in France that still remain intact and in their original place.

The church is in the 5th arrondissement, near the Panthéon and the Jardin du Luxembourg, and draws its name from the fact that it is set on the Sainte Geneviève mountain. The latter is a modest 61 metres above sea level, but the edifice of St Etienne is rather imposing and certainly appears to draw in the visitors, if their numbers yesterday were anything to go by… Unfortunately, they, like me, had to wait until four o’clock before being able to enter the church, but it was worth the wait. 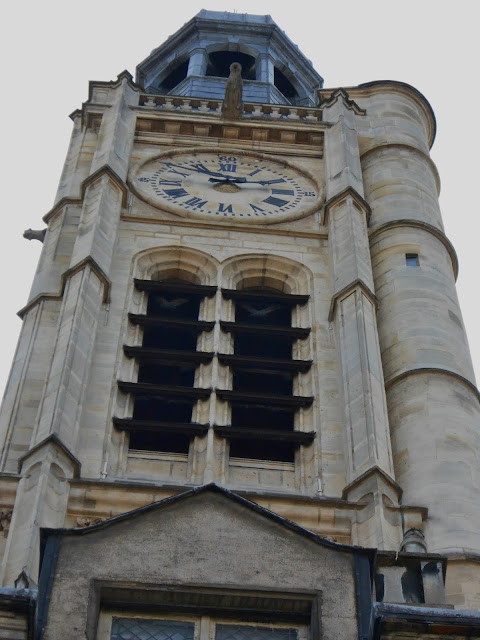 In fact, crowds are nothing new to the area, once site of the Abbey of Saint Geneviève. Indeed, the église St Etienne-du-Mont was initially built in response to the needs of the ever-growing worshippers who came to offer their devotion to the female patron saint of Paris. Geneviève had symbolized courage and piety during her lifetime, having bravely defended Paris, and stood up for its people, thus thwarting the intentions of Attila the Hun to seize city. Following canonisation after her death in the early 6th century, prayers to Saint Geneviève offered the faithful citizens hope of salvation from the plagues, flooding and general misery that visited the city in biblical proportions. The Merovingian king Clovis and his wife Clotilde ordered the construction of the church dedicated to St Paul and St Peter on a former paleochristian cemetery that eventually became the church and abbey of Saint Geneviève. The crypt and church itself became the royal necropolis for the first Merovingians, including Clovis and his wife, and drew pilgrims in large numbers. The sacred remains of Geneviève, carried each year by procession to the cathedral would lead to numerous miraculous occurences but themselves fell victim to the violence of the Revolution years at the beginning of the 18th century, as too did the eponymous abbey. 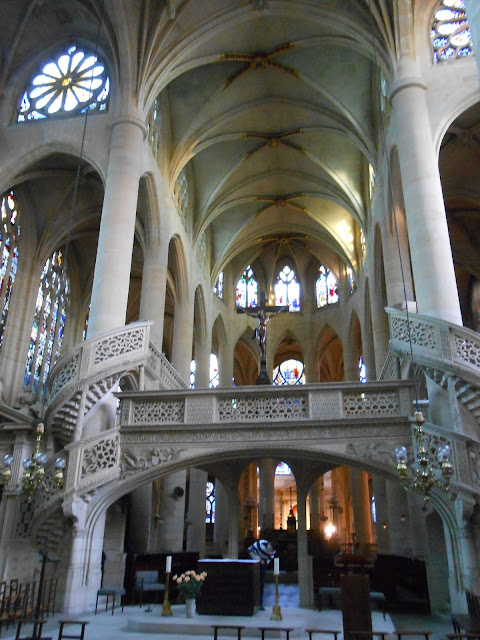 Having emerged alongside the north wall of the abbey of Sainte Geneviève, the church that would become St Etienne-du-Mont grew in size, stature and structure, a process that took many, many years. Authorisation was given to establish this autonomous church, devoted to Saint Etienne (St Stephen in English), the first martyr of Christianity. This indeed became a truly independant edifice on the destruction of the abbey in 1808, along with the creation of the road Rue Clovis. All that remains of the ancient abbey of Saint Geneviève is the tower – la Tour de Clovis - which now forms part of the Lycée Henri IV. The church of St Etienne-du-Mont finally inherited the relics of Saint Geneviève.
So it is that the church we see today was built over a considerable period of time, although the most intense activity was the hundred odd years between the architectural direction under Viguier and the posing of the façade stone by Marguerite de Valois in 1610. Naturally, the time span is reflected in the composite form of the church, its structure and decoration. This commenced with the Gothic apse from the reign of Charles VIII and ended with the Renaissance with its greco-roman porch of the façade, finished in the years of Louis XIII, and restored by Baltard during the Second Empire in the 1860s. Inside the church, the pointed Gothic arches give way to rounded arches in the nave which turn are echoed in the rounded forms of the ornate gallery that runs along the choir area and high altar. Striking Renaissance ornamentation is offset by the delicately decorated keystones on the vaulted ceilings, high above. 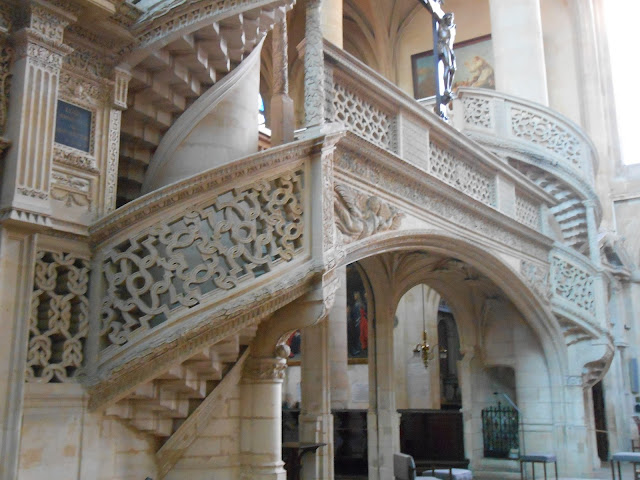 And of course, there is the rood screen. Built in white marble, constructed and sculpted by Biard Père in the early 16th century, there are few of the features that characterize the roodscreen of Sainte Madeleine of Troyes (cerca 1517). In Troyes, the intricacy and density of the sculpture is just breathtaking, here in Paris, the sheer mass and dramatic forms are otherwise striking. The ‘screen’ is a huge single arch that spans the choir area, with two spiral staircase forms on either side, leading up to the gallery above and the crucified Christ that towers above us. The geometric sculpted formations and interlaced patterns of the staircase demand our attention. 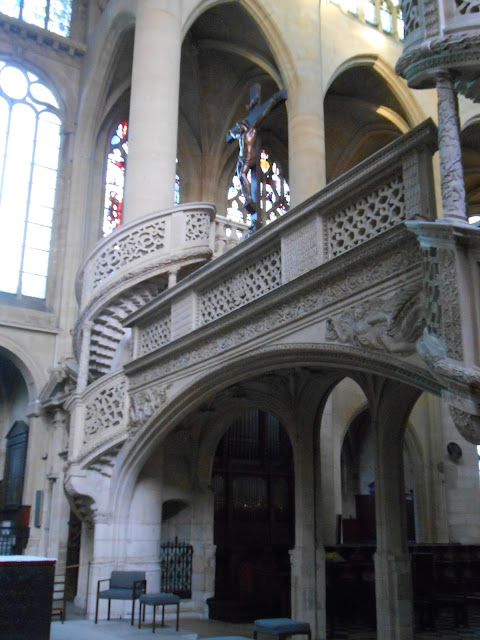 Unfortunately, a great deal of the ornamentation was difficult to approach as everything had been cordoned off for Mass, I imagine, and rightfully so. In addition to this, just as a bad workman always blames his tools, I wanted to jump up and down on my camera from frustration as it would not deliver its usual Luddite-friendly promise of point-and-click reliability. It really did not appreciate the limited overall lighting, combined with the shards of light beams coming through the stained-glass windows. 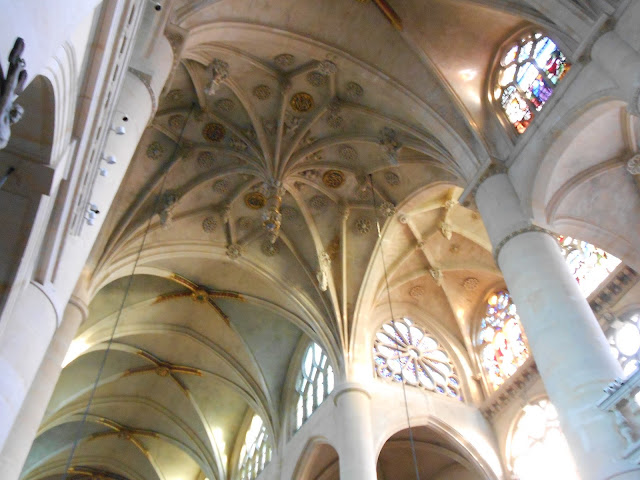 However, if truth be told, the whole experience of visiting St Etienne just made me realise how marvellous my visit of Sainte Madeleine had been. I was not disappointed to see the rood screen at St Etienne-du-Mont, but Classically-inspired art and architecture rarely move me the way those of the Medieval/early Renaissance period can. All those quirky details of human fallibility and the glimpses of the humanity - warts and all - within each being, seem to reach out over the centuries to make you feel the vitality behind them. Every gurning Gothic gargoyle seems to tell a story, a knowing wink from times long past, but the narration does not seem so distant. I duly admired the beauty within St Etienne, for beautiful it is, but I missed the unique atmosphere of Sainte Madeleine. This, of course, probably stems from the fact that I do not actually have any religious affiliations at all, and as much as I love visiting all these incredible ecclesiastical edifices I do not actually have any true spiritual connection. I do feel like an intruder, but if the aesthetic beauty and peace of a church or cathedral can draw you closer to Man and Nature, it surely can’t be all bad. 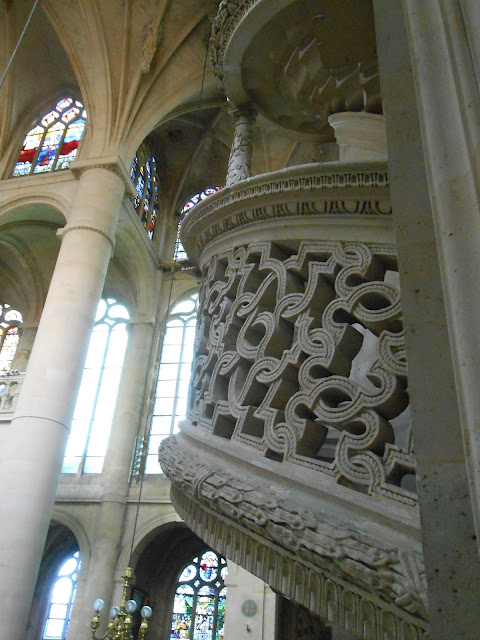 St Etienne-du-Mont continued to act as necropolis to great men, but finally the construction of a vast Neo-Classical edifice in the latter part of the 18th century – the Panthéon – took over this function. With the inhumation of Victor Hugo in 1885, the Panthéon ceased its own function as a church and became a temple devoted to the glory of the Nation. Although it had been decided that the relics of Saint Geneviève would be housed there too, but this was not realised and so the annual procession of Saint Geneviève still sets out from St Etienne-du-Mont to the Cathedral of Notre Dame as they always have. Notre Dame itself is built on the grounds of the initial cathedral of St Etienne…