The forested lands of the Champagne-Ardenne region, with the river Meuse snaking through the valleys, have long been the source of legend and folklore. The most famous of these is that of the Four Sons of Aymon, a tale of great valour in the face of injustice and adversity, and which is one of a number of Medieval chansons de geste, sung or recited by les trouvères (minstrels) in the north of France. Depending on the emphasis given to the key characters, it is also referred to as the ‘Legend of the Knight Renaud of Montauban’ or the ‘Legend of Bayart’, but the main elements remain… 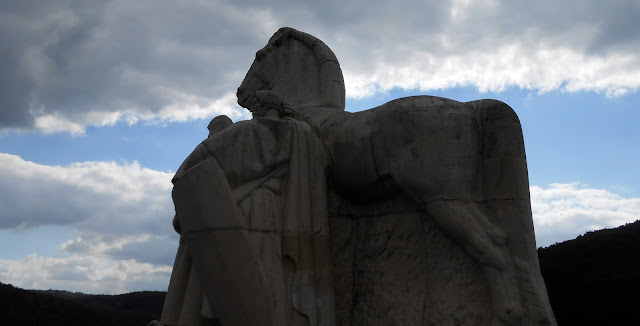 It is not surprising then, that a large monument dedicated to the heroic deeds of the four brothers Aymon and their magical steed, Bayart should be found in the heart of this region, high above the town of Bogny-sur-Meuse, overlooking the sinuous river and the forests beyond. The legend, with its story of defiance, determination and the strength of blood ties seems to symbolize the lands itself, frequently at the heart of strategic manoeuvres in power struggles and warfare. The sculptor, Albert Poncin, received the Médaille d’Or at the Salon des Artistes Français in Paris, 1929 for his statue, Les Quatres Fils Aymon. Whilst it was hoped that the piece would honour its ‘rightful’ lands – placed either in Charleville, Monthermé or Château-Regnault along the Meuse – lack of resources meant that it was nearly erected in Lyon instead. Sufficient funds were eventually raised, but the monument that we see today was only inaugurated in 1950. 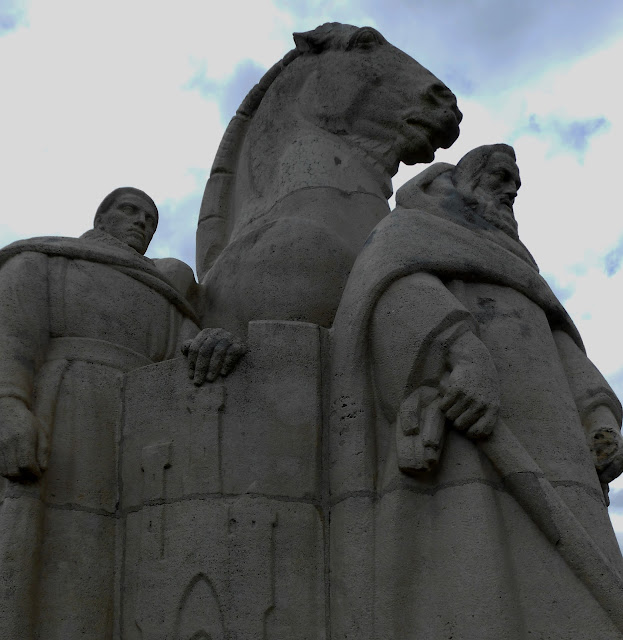 Although the statue initially met disapproval due to the stoic aspect of the valiant protagonists of the legend, it seems most appropriate today, as it stands proud and imposing, high above the meandering river. Each character has a particular stance and expression whilst Bayart, with eyes rolling, ears back and teeth bared, seems ready to defend his masters in their fight. 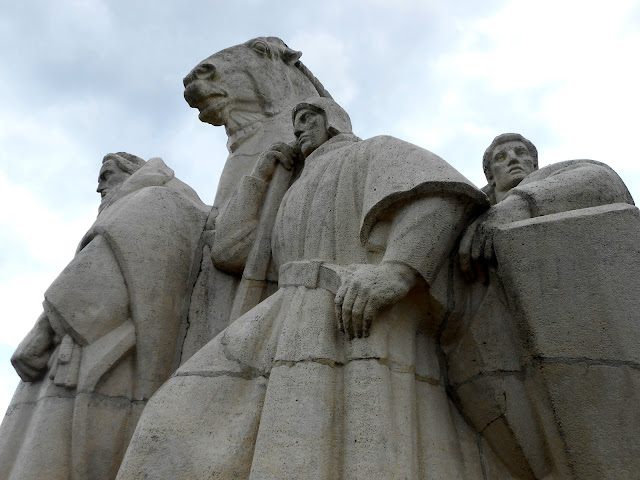 In the legend, the treacherous adversary of the four brothers Aymon is none other than Charlemagne himself; King of the Francs and Emperor. Duke Aymon of Dordonne, vassal to Charlemagne, brings his sons Renaud, Allard, Richard and Guichard to the court so that may serve the king honorably and become knights. Almost immediately, Renaud is granted this honour and given a noble steed to mount, thus inciting the jealousy of the King’s nephew, Bertolais. A fight ensues during a game of chess, ultimately resulting in Bertolais’ death. To escape the subsequent wrath of Charlemagne, Renaud feels, quite accurately, that he must flee the court and hide away until calm is restored. Strong sibling loyalty, and the canny feeling that Charlemagne might somehow stop at nothing to avenge himself of Bertolais’ death, the three brothers accompany Renaud on his flight from Paris. Into the story enters Bayart, the trusty beast, however it must be remarked that this is no ordinary horse.


As the offspring of a dragon and a snake, Bayart is naturally doted with extraordinary physical force along with a conveniently wide range of supernatural powers. Not only is he large enough to bear the four brothers on his back, Bayart is also able to cross valleys and rivers in one leap and swiftly carries them away to the mysterious forests of the Ardennes region. Any attempt by the enemy to pursue the brothers is quickly thwarted by Bayart, and the Aymons soon find refuge in these obscure lands. Here, with the help of Maugis the magician, the brothers build the fortress of Montessor which dominates the Meuse and live safely therein for a period of seven years until the grudge-bearing Charlemagne learns of their whereabouts. Through treacherous acts of cunning, the fortress of Montessor is stormed by enemy troups but all five heroes - Bayard being a key player in the action – escape via a tunnel to seek refuge in the deep forest, yet again. Seeing the fortress burning behind them, Renaud swears that henceforth the edifice shall be known as 'Le Chastel Regnault'.

Tired of never-ending flight and wishing to serve a noble cause, the Aymon brothers finally go to the Gascony region in order to offer their services to King Yvon in his fight against the Sarrasins. With the brothers’ aid, and that of the multi-tasking magical Bayart, the king soon defeats the enemy, headed by the Emir Beges. To mark his appreciation and to reward their valiant efforts, King Yvon erects the castle of Montauban, while Renaud takes the king’s sister as his wife. However, the ending ‘And they lived happily ever….’ seems a little flat and unfitting for a legends of such great chilvalry... Furthermore, let it be said that Renaud is not one to retire calmly , and so our hero decides to snub Charlemagne even further.

Indeed, Renaud does so by going to Paris to enter a competition that aims to find the best war horse possible for Roland, yet another of Charlemagne’s nephews and yet another sworn enemy of Renaud. Thanks to Maugis’ wizardry, Bayart is deftly transformed into a lame nag whilst Renaud becomes an unexperienced teenager. Naturally, both horse and rider resume their normal forms and demonstrate their great prowess, winning the race and earning the prize; the King’s crown. It is hardly surprising that Charlemagne is now even less willing to let bygones be bygones nor that his anger fails to subside with time…. 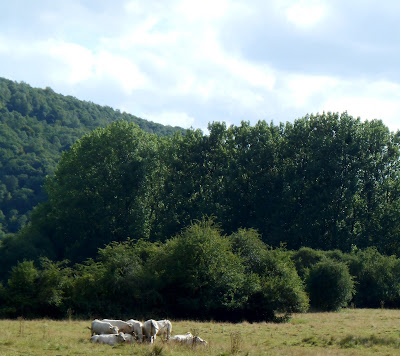 Indeed, pretending to propose a truce, Charlemagne attempts to trick the four brothers who resolutely refuse to pledge their allegiance to their king. With King Yvon’s help, Charlemagne ambushes the brothers in the castle of Vaucouleurs, but fails to kill Maugis who is therefore able to save them in extremis. Returning to the castle of Montauban, the injured brothers are finally besieged by the enemy troops and almost die of hunger. Although they eat all other beasts, the brothers draw the line at slaughtering Bayart, and decide to merely drink his blood. All appears to be lost, when suddenly Renaud miraculously discovers yet another tunnel and off they go on one more adventure.

However the prospect of yet another bout of cat-and-mouse pursuit proves to be just too much for all concerned. And so it is that when Charlemagne eventually sets out the two conditions in his offer of peace, Renaud accepts. The knight must not only go on a pilgrimage to Jerusalem, he must also hand over Bayart back to the king. Thus after years of loyal service to the Aymon brothers, the heroic beast is quietly given to Charlemagne who then promptly orders him to be weighed down with a millstone and thrown in the river Meuse to drown! Surely realizing a little late in the day that the ingratitude and cruelty of humans towards fellow creatures knows no bounds, Bayart kicks off these shackles and leaps from the waters.

Perhaps not surprisingly, the noble beast is no great hurry to resume his rather thankless service under the brothers and is said to have haunted the forests of the Ardennes ever since, his neighing clearly audible during the night of the summer solstice. As for the great Renaud himself, on return from Jerusalem he decides to devote his life to God and therefore becomes master mason in the building of Cologne cathedral. Sadly, he is never to live a peaceful life on this Earth and yet again manages to incite the ire of jealous individuals who kill him and throw his body into the river. Fortunately, in true legendary spirit, even the very fish of such waters are able to recognize a martyr when they see one and promptly decide to float his earthly remains to the surface, surrounded by burning candles and the singing of angels, no less! From then on, the mere Knight Renaud of Montauban becomes Saint Renaud. And so ends the legend of the Four Sons of Aymon...

The Four Sons of Aymon are to be seen on the clock tower of the Institut International de la Marionnette (IIM) at Charleville where the Grand Marionnettiste operates his puppets – Bayart, Renaud and his brothers – and each hour of the day is marked with one of 12 different panels of the legend. 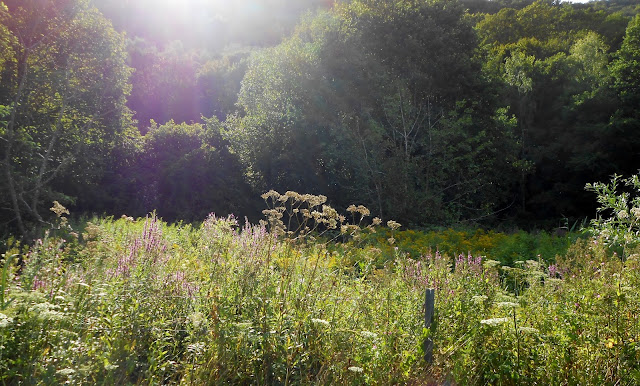 To get to Bogny-sur-Meuse from Charleville-Mézières, there are cycle paths along the river Meuse that winds its way through the wooded lands. No sign of Bayart, of course, but the landscape is spectacular and there are touches of the magic to be found in Nature; namely the herd of fallow deer and the light that suddenly floods through heavy skies... 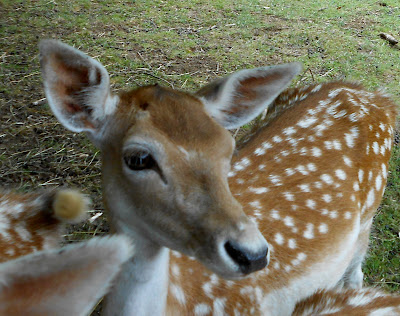