The Sainte Madeleine of Troyes and its Magnificent Renaissance Jubé...

I recently returned to Troyes, the magnificent Medieval town of the Champagne-Ardenne region, in the North-East of France. 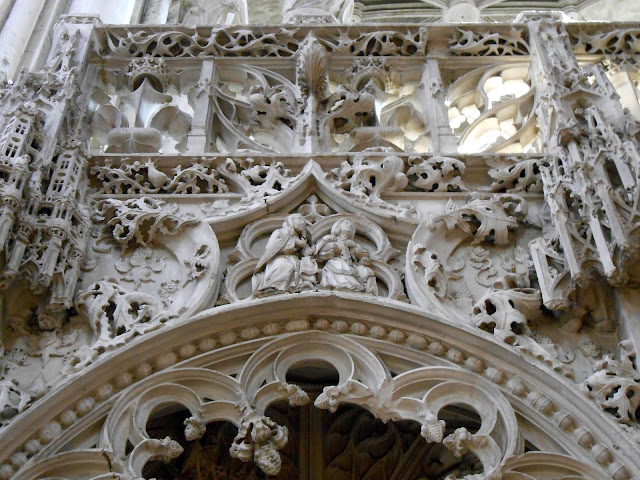 There I wanted to admire some more edifices that reflect the history of this town, just as the beautiful Middle-Age houses do in the unique ‘Champagne cork’ historical centre.

Indeed, the lay-out and architecture – secular and religious – of this centre testify to the evolution of Troyes.

From the rule of the Counts of Champagne (950-1316), the fairs of the Champagne region (les foires de Champagne) of the 11th century onwards and the subsequent growth of many industrial trades and financial commerce, the town forged a particular identity and assumed an appearance that reflected and honoured such unrivalled prestige.

One such edifice to benefit from the wealth and the spiritual and material aspirations of Troyes’ aristocracy – the noblesse de robe – was the incredible Eglise Sainte Madeleine. 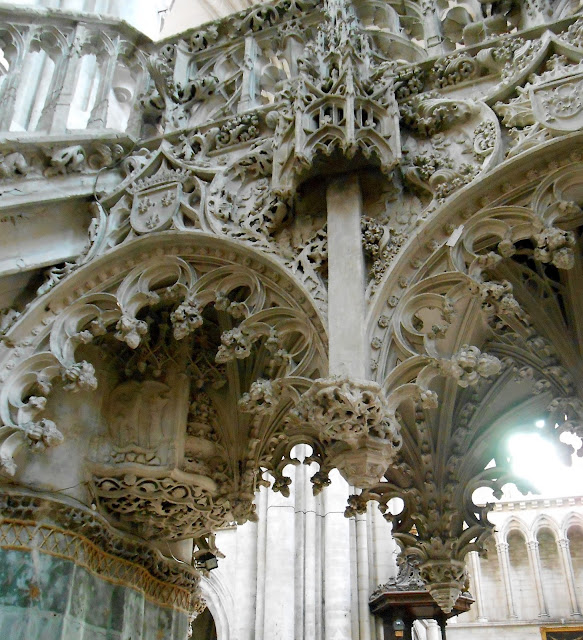 The church indeed reflects a prosperous period during which such rich parishoners, occupying judicial and administrative posts (hence the term nobility ‘of the gown’), were eager to finance ambitious embellishment projects. 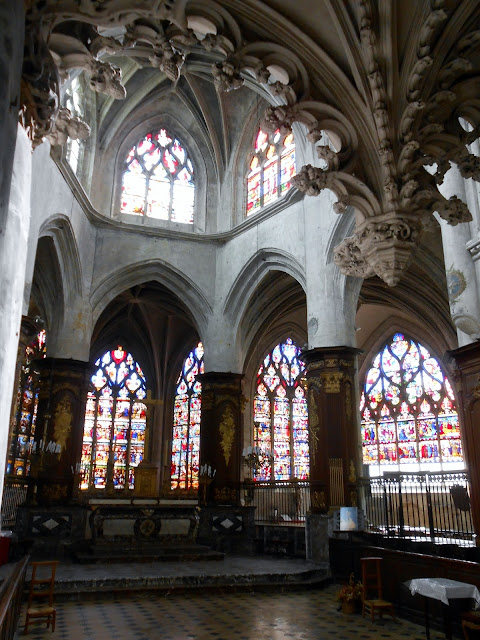 Being the wealthiest parish of Troyes, the church of Sainte Madeleine required a grandiose extension.

Amongst the desire to have a beautiful church in which to worship, there was also the need to have a honorable site to accommodate the tombs of its rich merchants, once they had departed from this world of power and privilege. 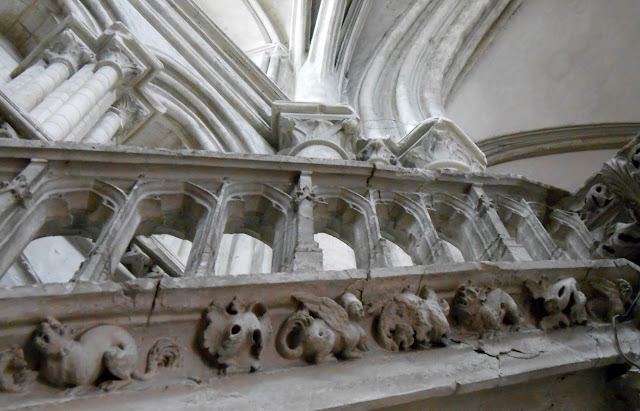 As a result, the somewhat modest church – the oldest of Troyes -  built in the 12th century, grew in size over the centuries, but most significantly so from the 15th century. 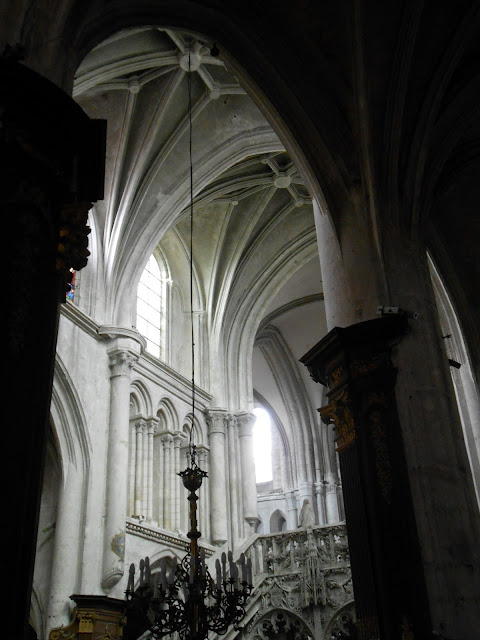 The interior of the Sainte Madeleine of the 16th century is largely what we still see today. 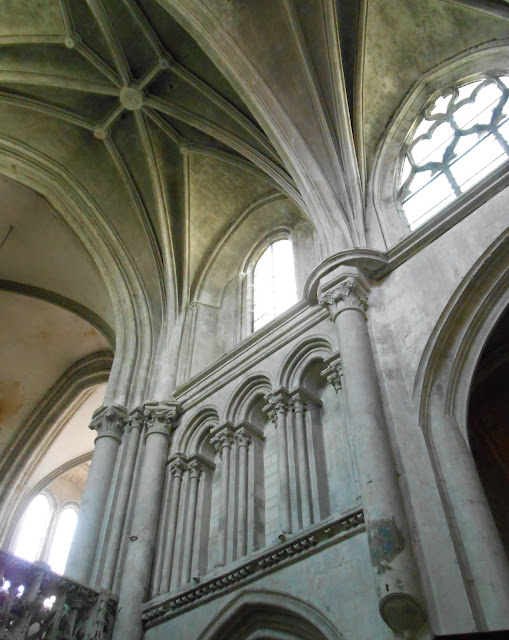 The exterior has undergone several significant modifications over the centuries. 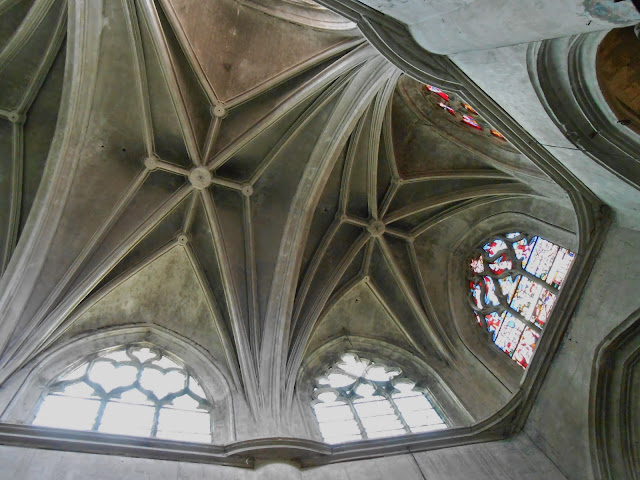 Indeed, the main façade was altered at the end of the 18th century, whilst the original cemetery was made redundant in the 18th century and ossuary was removed in the 19th.

The beautiful Jardin des Innocents was inaugurated in 2008; a peaceful garden created in an area that had previously been hidden behind the high walls.

Indeed, the calm and beauty of the garden is obscured by its imposing entrance.

Within the garden, is the southern entrance to Sainte Madeleine. 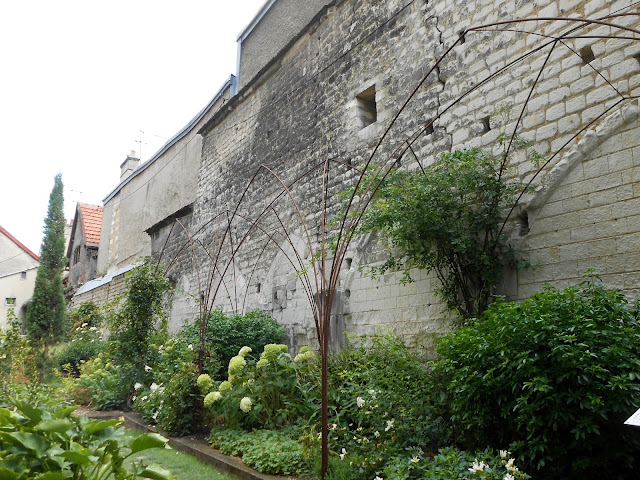 This was opened in 1550 to give direct access to the cemetery from the church.

In many ways, this entrance seems incredibly modest in aspect.

The area is dominated by the imposing Renaissance bell tower, composed of three levels.

The relatively sober façade of the entrances to the church itself give little indication to the nature of what lies beyond.

What distinguishes Sainte Madeleine, not only from all the other churches of Troyes, but also from virtually all those in France and indeed of Europe as a whole, is the presence of its glorious ‘rood-beam' and 'rood-loft'. These, together known as ‘le jubé’, serve basically as an elaborate divider to separate the chancel (sanctuary), with its officiating figures of the clergy, and the nave, with its congregation in worship.

Setting apart the liturgy from the laity, le jubé (rood-beam and loft) rose to prominence, literally and symbolically during the late Medieval period. 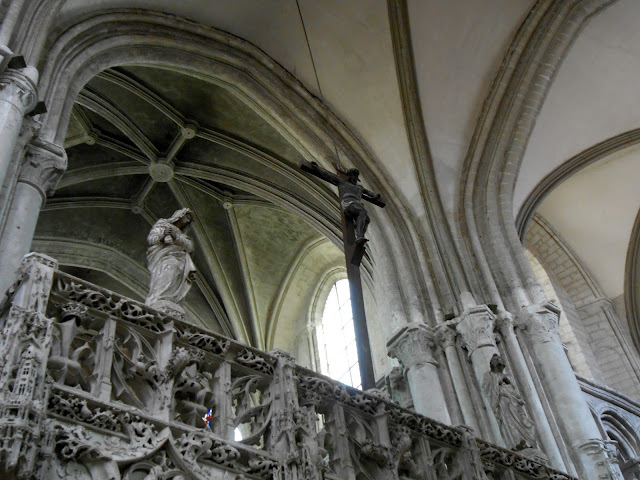 There was, however, little that was basic is its ultimate form or indeed in its practical use. It would be this sophistication that would partly lead to its eventual downfall as it became the target of the zeal of the Reformation and Counter-Reformation zeal that swept across Europe.

Considered to encourage superstitious veneration, the jubé were widely demolished, or rendered more ‘palatable’ by harsh measures, with statues smashed or ripped out and the drastic whitewashing of polychrome features.

And so it is today that very few complete jubé exist in either sculpted wood or stone form in France, except for those of Sainte Madeleine, Saint-Etienne-du-Mont in Paris, Saint-Fiacre of Folgoat in Brittany and l'Assomption de la Vierge at Villemaur-sur-Vanne. 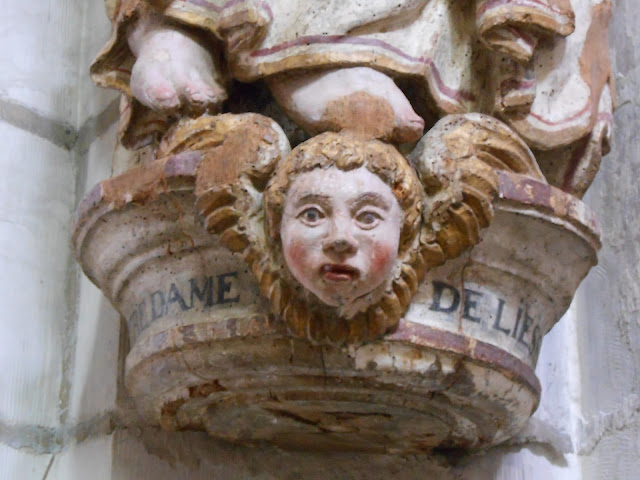 The jubé takes its name from the first word of the Latin prayer “Jube, domine, benedicire"  (“Deign, Lord, to bless me”.) spoken by the Reader before the lessons of Morning Mass. Indeed, this impressive structure served as a gallery from which the Gospel was read and sermons could be delivered to the congregation. 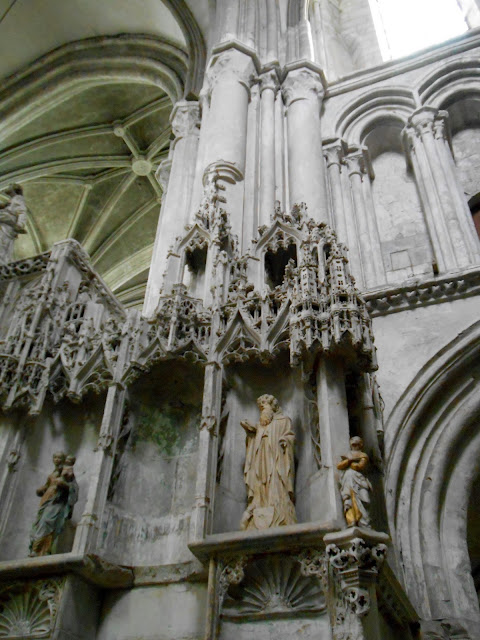 In this manner, the jubé replaced the one or two ‘ambon’ that had traditionally figured in churches; namely the elevated platforms, set onto several steps in the chancel. Following the demise of the jubé, these liturgical functions would be subsequently performed in the lectern and pulpit. 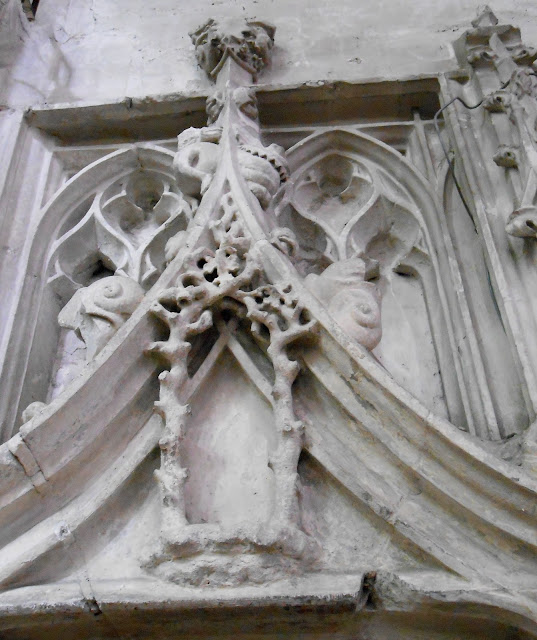 Singing also took place from the jubé, accompanied by a portable organ; hence the origin of the term ‘chantereau’ sometimes used to describe this gallery. Access was provided by stairs to the side of the gallery structure. 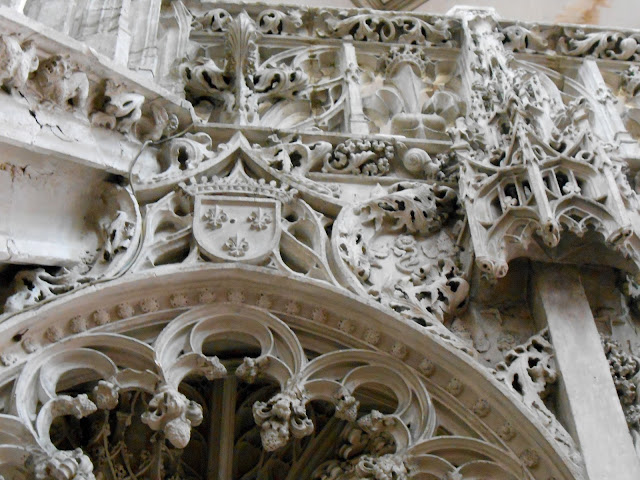 Nevertheless, the initial key role of the jubé was to bear the large central figure of the crucified Christ. This statue was known as the ‘rood’ in English, coming from the Anglo-Saxon word – 'rode' or 'rood' – meaning 'cross'. 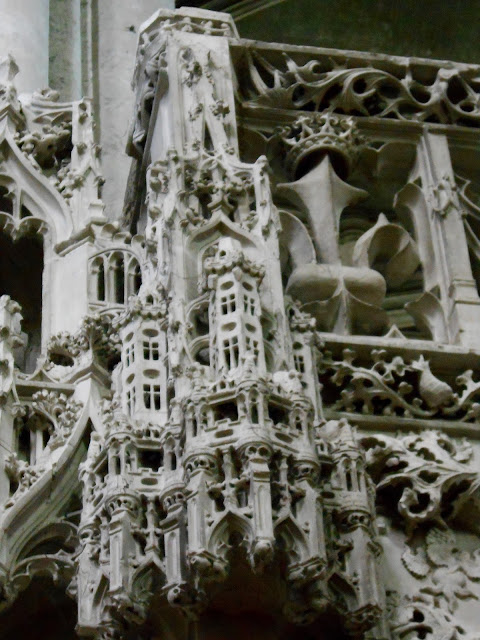 Christ on the Cross was generally flanked by statues of the Saints Mary and John. The rood and accompanying figures thus faced the faithful, yet were placed well above them, carried by a vast beam - la poutre de gloire or tref – that was set in a transversal position between the arch separating the nave and the chancel. 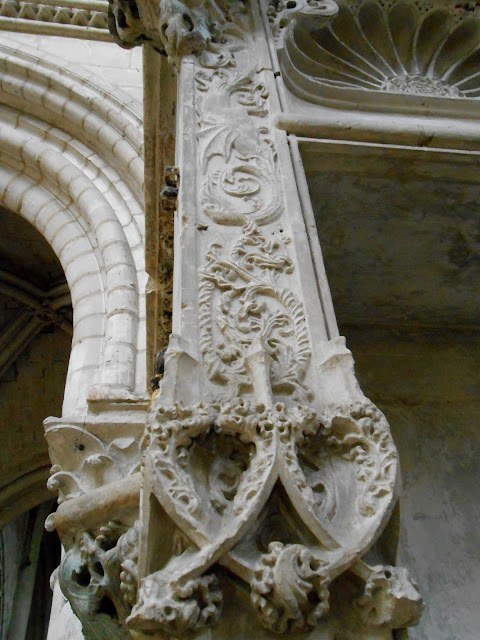 The elaboration of the simple rood-beam, with its Crucifixion, lead to far more substantial, imposing rood-loft as little by little the beam was widened to accommodate the candles for illumination of the central figures. In this manner, these early transversal structures were also referred to as ‘candle beams’. As this humble beam metamorphosed into the rood-loft, having acquired greater stature and importance in the liturgical rites, the structure began to require greater support, in the form of pillars and columns.

Finally, the jubé went on to incorporate the chancel partitions that had traditionally served to protect the Holy Sacrament and the altar area itself from secular use and/or sacrilegious abuse. 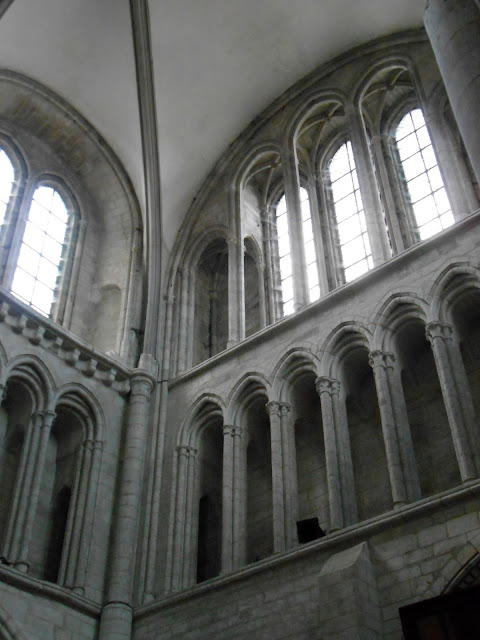 It also functioned as a visual barrier that concealed parts of the liturgy and heightened the spiritual experience and is sometimes likened to the 'iconostatis' (walls of icons or religious paintings) of Eastern Christian churches. 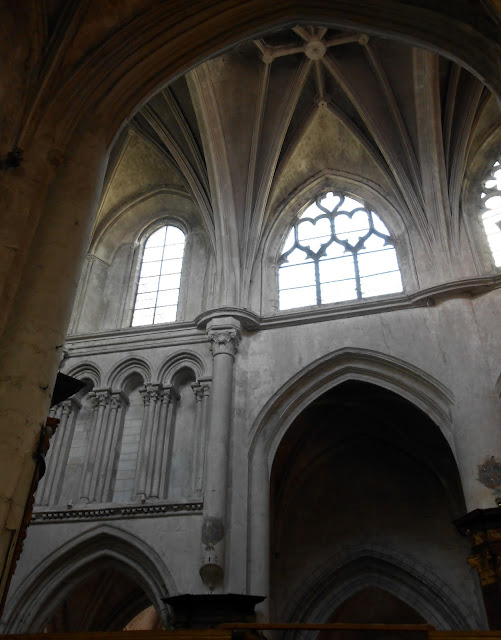 The chancel screens eventually became an integral part of the jubé/loft itself and were known as rood-screens, acting as a backdrop in religious ceremonies. The carving of such screens often included intricate latticework which enabled members of the congregation to look partially into the chancel from the nave.

Indeed, the word ‘chancel’ comes from the Latin cancelli, meaning 'lattice'. Often its structure meant that it was solid as far as waist-level so that those kneeling in prayer would not see the priest, but would catch sight of the elevation of the Host and Chalice during the service; others had ‘squints’ through which this could be glimpsed. 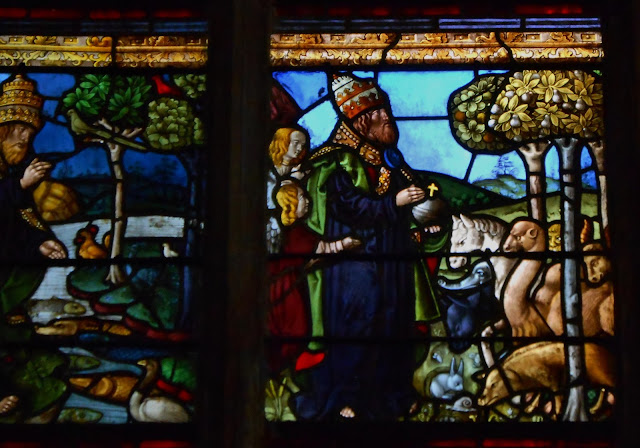 It was this same concealment that drew harsh condemnation of the jubé as it was considered to be inconsistent with the redefined tenets of liturgy which required that the chancel and each part of the service therein be fully visible to the laity. Pulpits and communion rails were consequently deemed more appropriate.

In view of such an historical context, it seems miraculous that the jubé of Sainte Madeleine of Troyes should have escaped destruction, but somehow it did.

It has been said that during the Revolution, those ordered to carry out the destruction of the jubé were led to believe that should they proceed, the whole edifice would collapse, as the jube provided essential support to its pillars. Finally a few fleur-de-lys were smashed, several statues were lost (but since replaced by others), but the whole remained relatively unscathed.

On entering the church today, the visitor is confronted by a structure that is nothing short of a visual miracle of highly-skilled craftsmanship that combines great esthetic beauty and spiritual devotion.

The sculpted stone really does appear like frothy lace, with its intricate forms and details that belie the strict architectural mastery involved in its realization. The entire structure is based around the main arch thanks to the use of iron, concealed in the stonework.

The sculptor responsible for this incredible work was a certain Jehan Gailde, the very master-mason who had carried out the extension of the church chancel between 1501-1506, but whose project for a new entrance to the cathedral of Troyes had been rejected by the Chapter. In order to assuage his hard feelings, Gailde decided to surpass himself in the realization of the stone jubé in Sainte Madeleine, which was commissioned to replace a former wooden version. 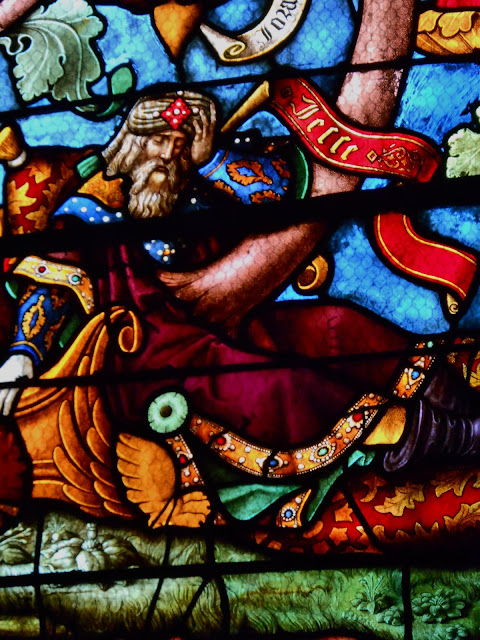 Work commenced around 1510, and the jubé, sculpted in stone from Tonnere (Yonne region), fully reflects the mastery and determination of its creator, who was eventually buried beneath his masterpiece, with the epitaph indicating that he awaited “Blessed Resurrection, without the fear of being crushed”. On the top of the Renaissance jubé gallery, we can see the different patrons of this work in sculpted medallions, all carried out by a secondary sculptor, Nicolas Halins. 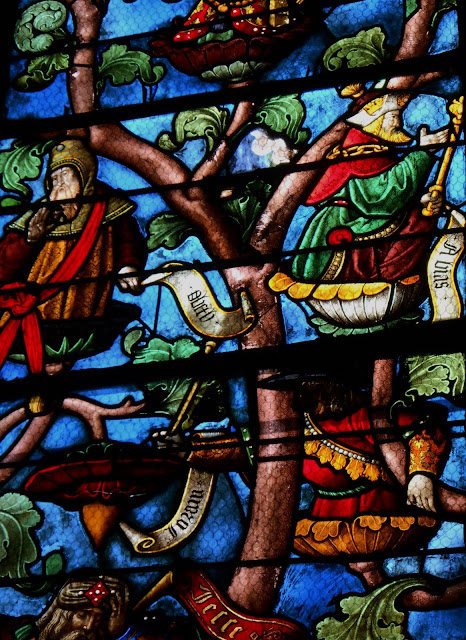 However my favourite details have to be the numerous plants and animals that decorate the whole structure, to the point where your eyes simply do not know on what to focus! Unfortunately, the sculpted wooded partition that originally closed the jubé has been taken to the Musée de Vauluisant which I did not manage to visit… 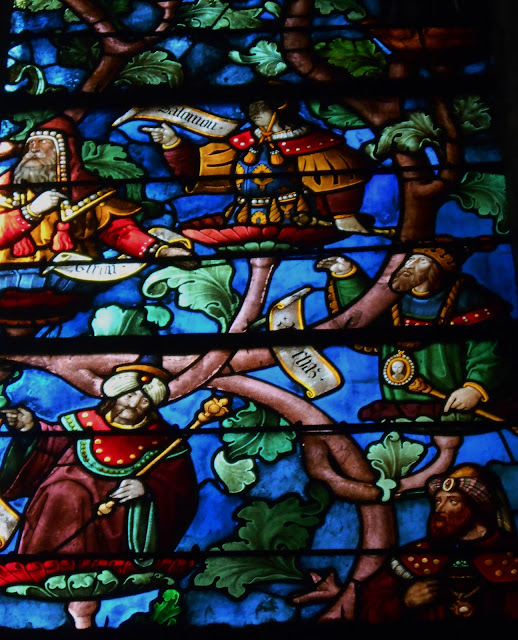 The stairway leading to the gallery, added around 1514, is still visible. Whereas the jubé appears to us largely as a delicate white, in fact it was initially polychrome, and on closer inspection areas of green colour can still be seen. 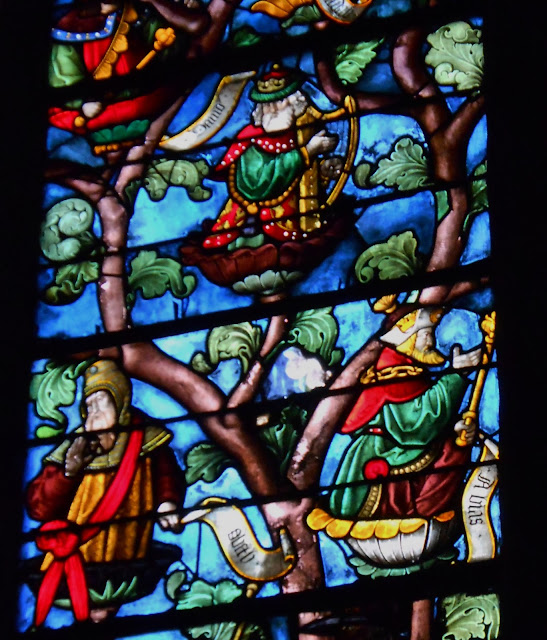 Indeed, we seem to assume today that these centuries-old religious buildings bore the uniform, sober tones of masonry, and the only colours available were those of the stained-glass windows, but in fact this was often far from the actual case. 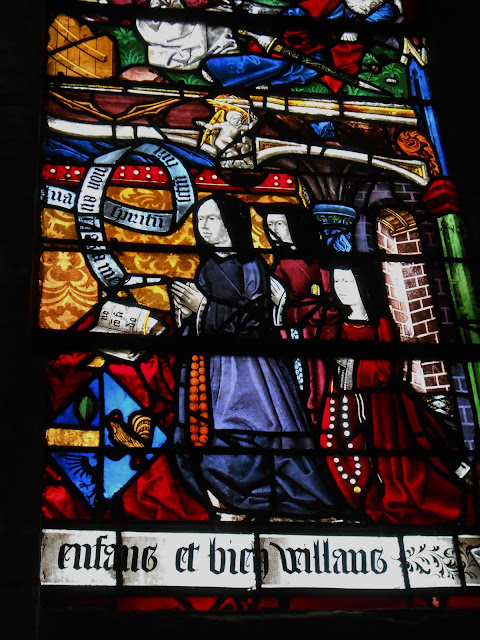 Here in Sainte Madeleine, ‘les vitraux de l’Ecole champenoise’ must have set off the colouration of the once poly-chrome jubé. Nevertheless, it is difficult to describe here the incredible range and depth of colour of the stained-glass of this church and do it justice... It is hardly surprising that these vitraux were an inspiration and model for numerous ecclesiastic buildings in the Champagne and Burgundy regions. 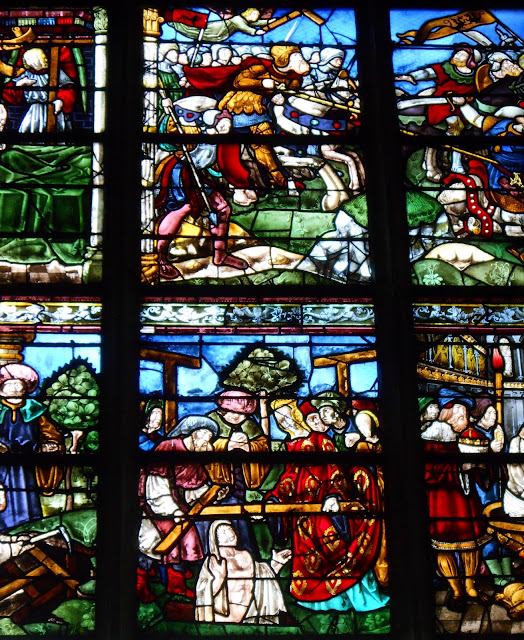 Of the many religious episodes exposed here, my favourite scenes were those of the History of Salvation and the Tree of Jesse, where the colour, luminosity and detail are unbelievable.
In addition, given the relatively low height of these windows, the stained glass can be admired with relative ease and an uncrooked neck! So, if ever you have the chance to visit the magnificent Medieval town of Troyes, make sure you track down the Sainte Madeleine. It took me a little while to find, meandering as I did through all those magical streets, but I enjoyed every moment of that and my destination was just amazing… 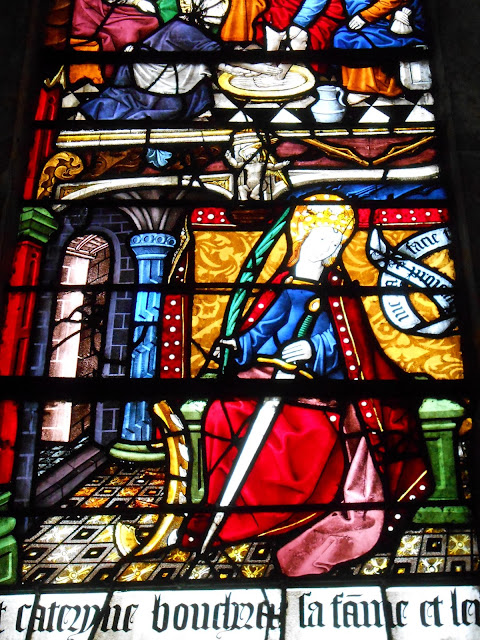