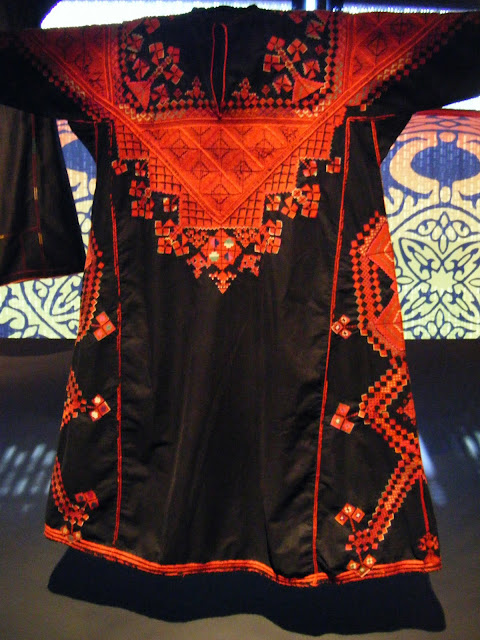 Ramallah, Gaza, Hama, Mossoul, Naplouse, Hebrun, Bethlehem, Neguev; all these beautiful-sounding names from the Middle-East pour off the tongue, but often stick in our minds here as being zones of turmoil and upheaval,  often cited heatedly and hastily as part of a news flash. With this contrast in mind, I recently visited the  Musée du Quai Branly, Paris, where all the above were linked by a common thread of delicate beauty and a sense of timelessness; that of the traditional women's embroidered outfits. 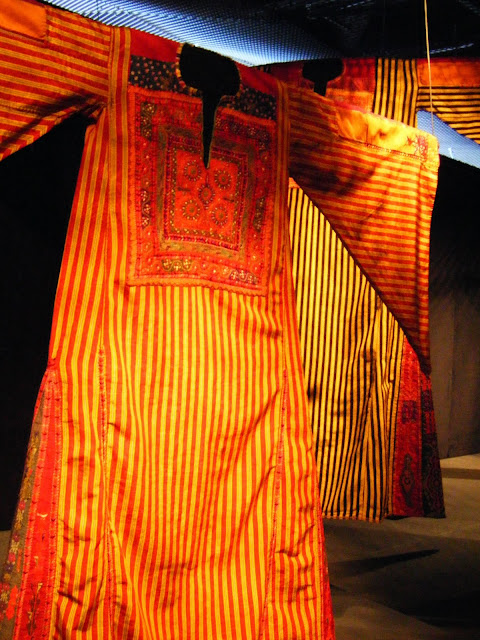 The Orient des Femmes exhibition is designed as "a hymn to women, a hommage to those who throughout the centuries have tried to create vestimentary means by which to embellish themselves and to prove their existence in societies that had long marginalized them.....through the gestures, tastes and talents they have given to each garment, thus giving a part of themselves in composing each work as a work of art" as said the commissioner Hana Chidiac.

Dresses, head-dresses, veils, coats, caftans, cushions, jackets, jewellery and serouals are revealed to us in their intimity; all the items, in short, that composed the traditional, timeless marriage trousseau in a continuity of custom and skill that was passed on from mother to daughter throughout the ages. 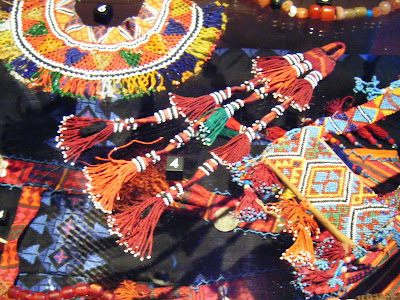 The exhibition leads us from the northern part of the region to the Sinaï dessert in the south as Syrian, Jordinian, Palestinian and Bedouin costumes are displayed, like strange winged creatures in a dance-like procession, or an ethereal, floating catwork - Christian Lacroix being the conjuror behind this magical display. Just as the terrain covered is vast, so too is the time span as the exhibition opens with a little girl's dress from the 13th century, found in a valley in Northern Lebanon, and ends with the dresses from a relatively modern-day Palestine.

Nevertheless the same basic shape of dress is to be found tracing over the centuries, despite the diversity of material used, the colours selected and the embroidery applied to the whole. In this manner the child's dress leads us on the journey to the final stages in each girl's rite of passage, the preparation to become a woman, finally marked and flagged with the wedding dresses that close the display. 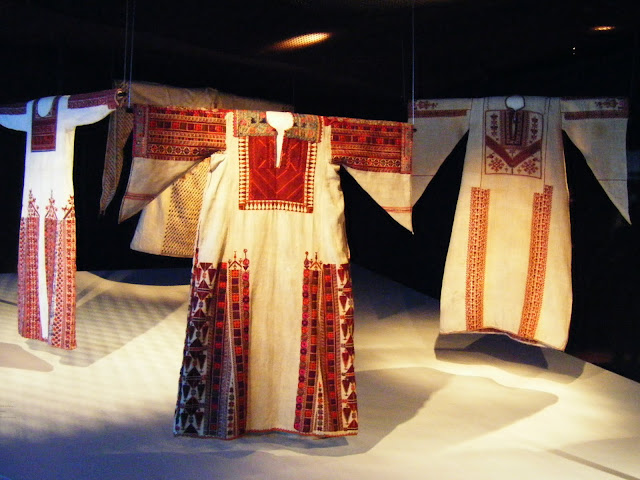 Indeed, all these dresses, with their distinctive outline float beyond us like flags, leading us on, signaling the geographical background of the wearer with their unique designs and motives; tied and grounded by ancestral practices yet offering a symbolic esthetic freedom in this journey from past to present, present to past. A geographer of the early 20th century, Jacques Weulersse, remarked during a visit that travellers "had expected to see clothes of poor peasants and instead discovered the costume dresses of opera dancers" (Paysans de Syrie et du Proche-Orient; Paris Gallimard 1946). 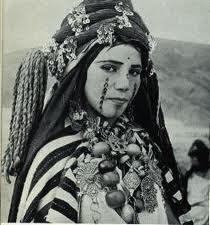 Each outfit would bear the characteristic features of its particular region, village or tribe of origin, thus acting as geographical and social indicators that could be 'read', as Christian Lacroix mentions "Ce qui dissimulent ces femmes les racontent bien mieux que n'importe quelle mode occidentale". Indeed, these "robes écrites" covered and cloaked their wearers yet uncovered, revealed so much more through their conception and the intricate personalised ornamentation of their needlecraft. 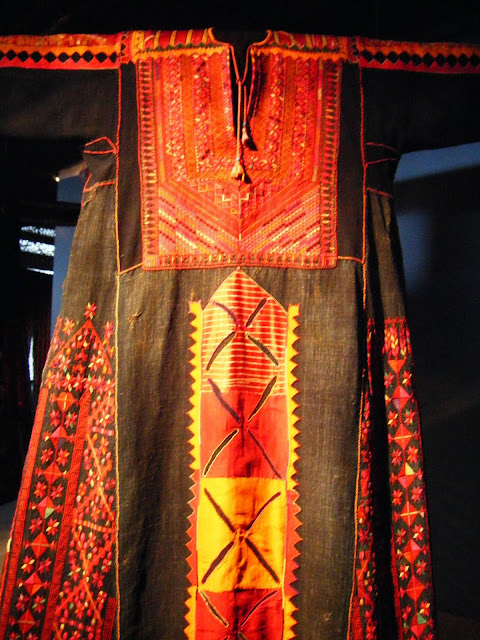 As a cultural, economic and political crossroads between Asia, Europe and Africa, the Middle East developed a wealth of artistic civilisations and, as a consequence, a mastery of cloth production and  the creation of exquisitely ornate clothing. Embroidered cloth can be traced back to the Egypt of Tutankhamun and this art form later extended under the Fatimides (960-1171) when linen material would be run through with multicoloured silk thread and gold to provide embelishment. Under the Caliphate of Cordoba (929-1031) production of such cloth increased to meet the demand for ornate gowns to be worn by the sovereigns and dignitaries during ceremonies.


Caligraphic detail was gradually replaced by animal and plant forms, eternal elements such as the sun, the moon and the stars and geometric forms - largely featuring lozange shapes to ward off evil forces. 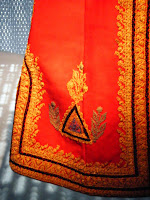 In a similar manner, each piece would bear a basic flaw in its decoration in order to respect the principle whereby only Allah is perfect, humans being incapable of aspiring to or attaining such perfection.

In terms of materials used these evolved over the centuries, in turn influencing and inspiring designs and styles. Silk production - sericulture - developed around the Mediterranean basin, in Turkey, Syria, and the Lebanon, and following the Arab conquests of the Iberian peninsula, in Spain and Portugal too.
Linen and cotton were commonly used, of course, followed by gauze, the light material that was developed in Gaza, and also mousseline, created in Mossoul. Likewise colours were introduced, following and elaborating ancient dyeing techniques so that the resulting hues influenced surrounding regions, spreading out like ink. In the north and eastern regions clothes were sewn from dark-coloured material - midnight blue and black - whilst in other areas ochre tones would be favoured.
Certain Bedouins, who dressed in sombre black or blue tunics were later inspired by their Palestinian neighbours and would brighten their clothing with vivid embroidery of contrasting colours. Indeed, during the golden age of needlecraft the towns of Bethlehem and Beit Dajan were stylistic centres comparable to Paris in terms of couture.... 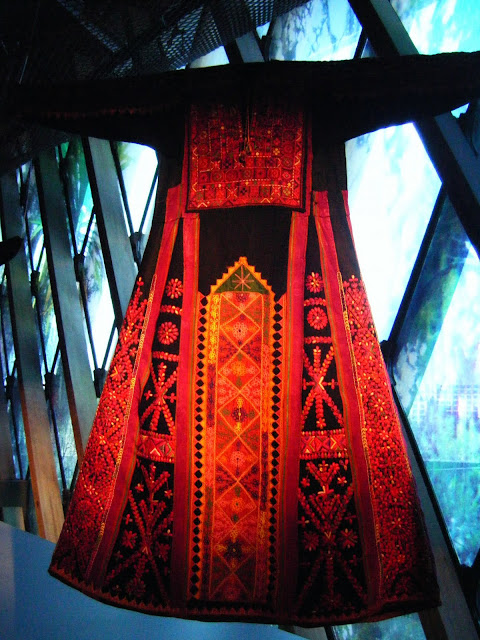 Much of the choice of colour would naturally be based on the availability of the essential dyes. Indigo, perhaps being the oldest dye dating back to ancient Egypt, was introduced by the Arabs to what became the Muslim Mediterranean and was said to have the attribute of offering protection from the Evil eye. Garance, a hardy plant from Persia was cultivated in the eastern regions of the Mediterranean and its root provided a blue colour, whilst walnut would be used to yield a dark brown dye, and safron would produce the characteristic yellow colour. The colour of predilection for many, however, remained red since it symbolized fertility and protection, and assured future wealth. 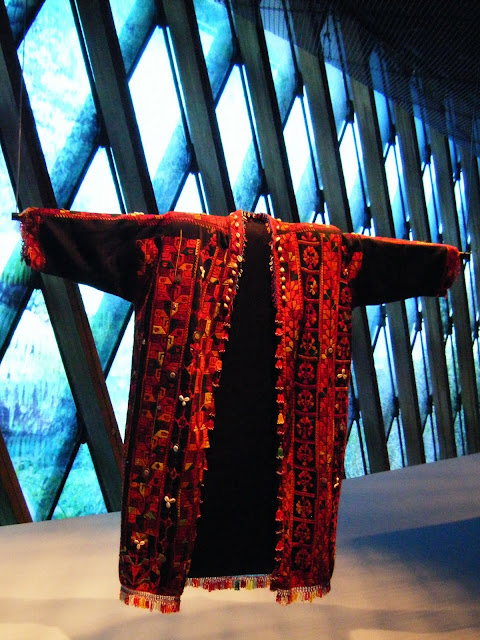 This was derived from the ground bodies of the Kermes scale insect, but would later be commonly replaced by the Cochineal beetle. To decorate garments to an even greater degree ancient dyeing techniques would be employed - varying from the tie-and-dye methods, inserting a date pit or lentil to form a corollary effect of colour blossoming out, to wax-and-knotting. 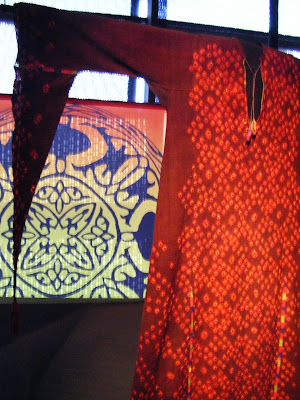 The stitching itself reflects the influences experienced and these organic changes can be seen in the clothes that have taken inspiration from the Ottoman army. Gold brocade seen on army uniforms has been transcribed onto a feminine garment, using striking point de Boulogne stitching to highlight the gold thread incorporated into its decoration. 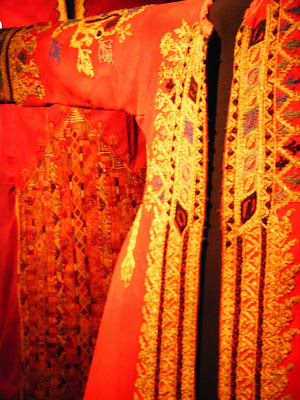 Although the T-form of the dresses, formed from one piece of material, was maintained through the generations of women, this could be modified. The addition of extra panels of fabric in order to widen the sleeves, or extend their points led to wing-like proportions ending in tassels that further enhance the effect. Such sleeves would be tied behind the dress during daily domestic tasks and then let loose for dancing in festivals. Simply by length, a garment could assume another character as is demonstrated by a dress of seemingly elephantine proportions which at over 3 metres long required a complicated routine (maybe a little like that needed for preparing a sari) in order to position the excess material to form an ample veil and pouches to transport objects. 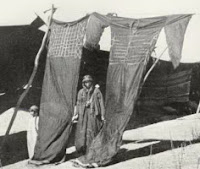 As garments fell victim to wear and tear all the richly decorative stitchwork would be removed and sewn onto new clothes, thus recycling the art work and perpetuating the tradition of ornate sewing as an integral part of vestimentary customs. 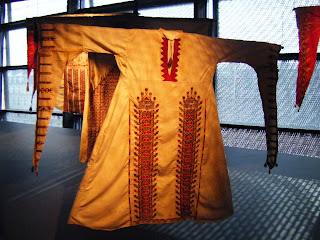 Such clothes would generally be completed and set off by a head-dress and veil which would enhance the esthetic effect. These would be decorated with coins, chains, shells and beadwork and offered a certain protection from the sun, sand and wind but above all seemed to emphasize the beauty of the wearer in her entirety.


Pierre Loti, one of the many 19th century French enthousiasts of all things Oriental mentioned this ornamentation of faces hidden under "streams of coral and silver". 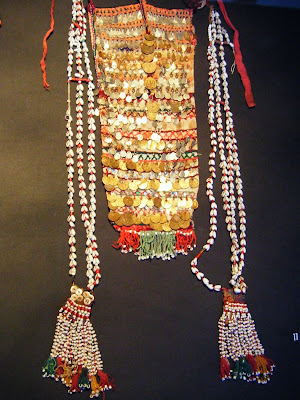 Initially these veils and head-dresses provided a means to distinguish between different classes and appartenance to specific clans, and were less associated with a religious function of imposing modesty and concealment, and were thus far removed from our notion of the burqa today.

Young girls generally did not wear such items, whereas married women wore these tribal burqas - head-dresses that displayed all their dowry to such devastating effect.


The poet Alphonse de Lamartine remarked on this in his Voyage en Orient, 1832, when he spoke of women with coins plaited in their hair "ressonnant à chaque pas qu'elles faisaient comme les écailles d'un serpent". 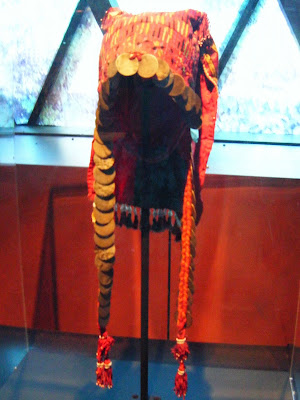 For Bedouin women of Syria and Berbers khol around the eyes would further intensify the gaze, whilst facial tatoos or henna would extend the eyebrows and complete this impression of depth.

Sadly the tradition of these dresses that reflect a collective voice made up of thousands of individual stories has largely faded out.

The contact with the Western world, so sought after by countless European 19th century Orientalists, enriched the latter, inspiring numerous artists and writers.This contact was to have a largely negative effect on the vestimentary styles of the Middle East.

The influence of the myriad of Western fashions altered the ancestral ones of the Orient, and the end of the Ottoman Empire and the First World War further accelerated this process. 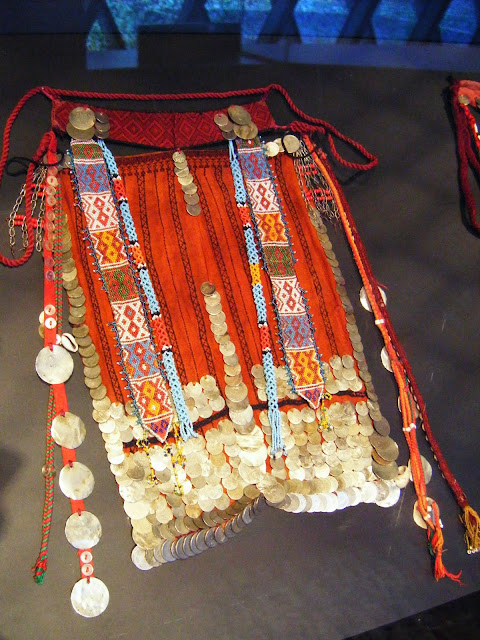 The advent of sewing machines changed customs, industrially- manufactured thread and synthetic materials altered techniques whilst dramatic social upheavals wreaked havoc on the rites and rituals of fragmenting social groups. Before 1948 Palestine had a rural population on coastal plains, by 1967 many Palestinian women were obliged to sell their costumes and jewellery merely to survive the displacement after the war of Six Days. Towards the end of the exhibition we see several more recent dresses created thanks to an endeavour by humanitarian associations to give life back to the ancient traditions and provide a welcome source of revenue. 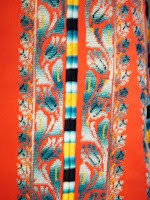 However, perhaps the disappearance of ancestral needlework practices is, in some ways at least, similar to that we see here in Western countries.....Cheap, ready-to-wear clothing, free of adornment, along with modern textiles unsuited to traditional designs and motives, coincide with a desire to turn to 'easier', modern styles and  newer means of self-expression.


Here in our western culture this trend has, in part, led to the ubiquitous jeans-and-teeshirt uniform that has stamped and swamped generations since their rise in the 50's, and there, a certain loss of a precious, intimate art form.