Spring has come and gone, it seems, at an astonishing speed. We have flown from the stage of the early budding forms of plants, bushes and trees and hesistant sunny spells to full-blown summer in a very short, accelerated space of time, or so it appeared today (and 27° forecast for tomorrow!). As they unfurl, burst open their chrysalis-like forms and spread out to reveal the real nature of their contents, many buds assume such strange shapes. It is hardly surprising that they have inspired so many artists...


Ferns seem to unravel, like weird bobbins covered in a furry or wet-feathered down, yet do not give any real indication to the future shape of their fronds.

Their forms stand up so straight, yet with a distinctive curve as the coiled head bows into itself, looking like some prehistoric creature stooping forward, ready to strike some unsuspecting prey.
The Victorians were great enthusiasts of the pteriphytum family and were led by the craze of 'fern fever', pteridomania, from the late 1830's onwards. Fern images were widely reproduced, appearing on all manner of decorative household items, and were used to embellish many of the keepsakes from gatherings such as Christenings. This enthusiasm led to the introduction of the Wardian case, a version of the terrarium, in which ferns could be kept, preserved  from the harsh polluted city air yet enabling all to admire the exotic forms that the fern could offer. Indeed, fern fever was not just the preserve of botanists but of any self-respecting cultured individual and it is perhaps not surprising that this craze led onto the burgeoning interest in orchids.


The Wisteria buds sprang out, the flowers always more abundant than the leaves in the first stage, yet the tiny fronds are waiting to burst out, like feathery fans around the papery cocoon of the future blooms. The flowers are now fully open, draping themselves over the trellis and hanging down with their weight, and perfuming everything with the honey scent.

Here the vines are starting to bud, although the ones in the photo below are not representive of any viticulture since they are never cut back as they would be in a true vineyard. These vines, just outside the school, are simply for ornamental purposes, showing their development over the weeks as the rosy-pink buds break out from the dried, furling tendrils that look like snaking barbed wire!
Not far from the wild-running vines are decorative beeches that are, on the contrary, kept closely clipped behind mesh fencing but the little pleated leaves with their silvery down still catch your attention because of the bright green.


The sticky buds of the Horse Chestnut tree are perhaps the weirdest of all with their determined drive...
And of course with the buds come the bugs - and in the park we came across these strange creatures les gendarmes that congregate in impressive numbers the minute the spring comes... in order to frolic. Such frolicking usually presents itself in tandem formation - end to end - and can last up to 30 hours! I don't ever remember seeing these busy creatures in the UK where they are better known as 'Firebugs'.
The bumblebees have returned and this one made its way into the house to the great surprise of the cat, who had not yet seen such a beast. Deposited outside again, safe from a curious kitten, it seemed to enjoy crawling around the plants, within the vision of a very frustrated cat, watching from behind the window!
The cat also discovered this horned beetle in the garden...

However, the strangest beast that we have encountered this spring was most certainly the gigantic spider that awoke from its dormant position, having been hunched on the flank of Reims cathedral waiting for its moment to come.


Last Saturday, its moment truly came, and with hordes of people gathered to watch the event, the spider made its way down from its lair and started to wander around the streets, flexing its huge legs from a body of over 15 metres in width, 13 metres in height. The visual effect was very eery since it was so lifelike, spidery and stealthy, and the accompanying noise of music and the hiss of fire and water made our skin creep.
Kumo, this Meccano arachnid of enormous proportions, is one of the mécaniques savantes - the performing mechanical devices created by a French company in Nantes which has the aim of creating 'sculpture in motion'.
The spider is here in Reims until the beginning of May in order to commemorate the 800 years of the cathedral, and on Saturday it marked the official opening of the tramway system in the city. Although new to Reims, similar beasts have already set the tone for official events in Liverpool, as European capital of Culture in 2008, and in Yokohama in Japan.
Operated by several people sitting on top of the body, and then many more below, the creature nevertheless looked so 'natural' that many children were simply terrified, and the adults' turn to feel a certain apprehension came in the evening! By nightfall, the spider had made its way to the Place de la République where it took a central position, surrounded by hundreds of unsuspecting people, about to get caught in the hypnotic web of the firework show. Despite the mounting music, which was like a pulsating, threatening throb, the beast slept, and only started to stir when the huge flames and roaring drum beat became overpowering. The atmosphere was like something from the War of the Worlds, with a tension that grew and grew. The fireworks then exploded into action and Kumo came to life, thrashing enormous legs, black silhouettes against the backcloth of night sky, explosions and fire. The fireworks were like an air raid blitz that lit up the whole place, the noise was deafening, all of which reached a culmination point that ended in abrupt silence and blackout. Talk about dramatic! Most people were left rather shell-shocked from the experience...
Here's a link to see the event... If you can't watch the whole clip, just follow the opening sequence and then the final minute - it makes my skin prickle just watching it again.

I thought Kumo had met a symbolic end, but she was to rise from the flames like a phoenix for the next day....


On the subject of creatures arising, the twisted, burgeoning forms of the Paris metro entrances, designed by Hector Guimard, at the end of the 19th century always remind me of the triffids from John Wyndham's 1951 novel (The Day of the Triffids)...You get the feeling that these will suddenly come to life as you descend into the depths of the Paris underground system! 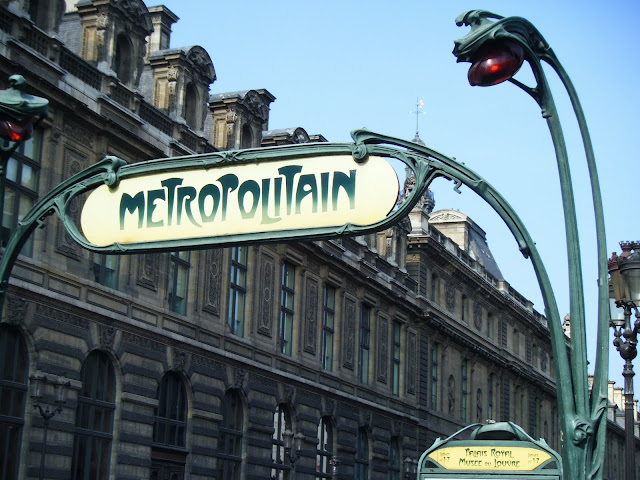