Well, actually the sun might not be on it's way, but in order to face another week, hopefully not like the last one - here's something to put a bit of warmth, brightness and appetite into this evening which is starting to feel decidedly autumnal. What better way than with some photos of Provençal markets! Everything felt light-filled, colourful, perfumed and humming with people and wasps when I took the photos, and seems all the more so now as the seasons change. 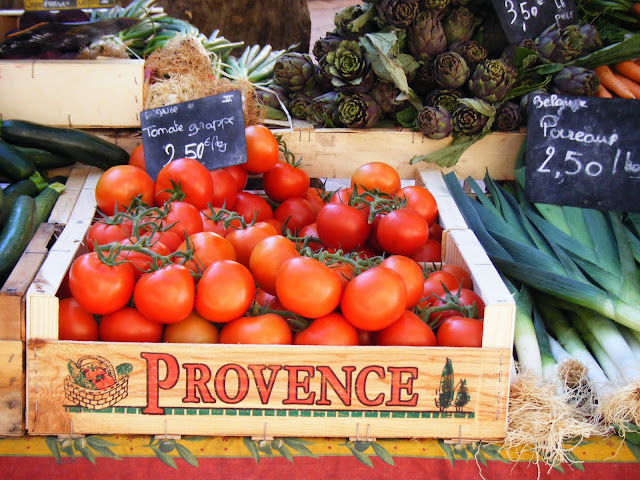 Open-air food markets seem to be an integral part of the French lifestyle, in a way that doesn't seem to find an equivalent in England, or perhaps just in the lifestyle I had in the U.K! In France such markets can be found in every village, town, city - with many larger towns (Reims being one of them) having a market in different quartiers each day of the week - each market having its own character and 'flavour' adapted to the demands and tastes of the clientele. There are, of course, usually covered permanent market halls to be found too, with buildings generally situated in the town centre. 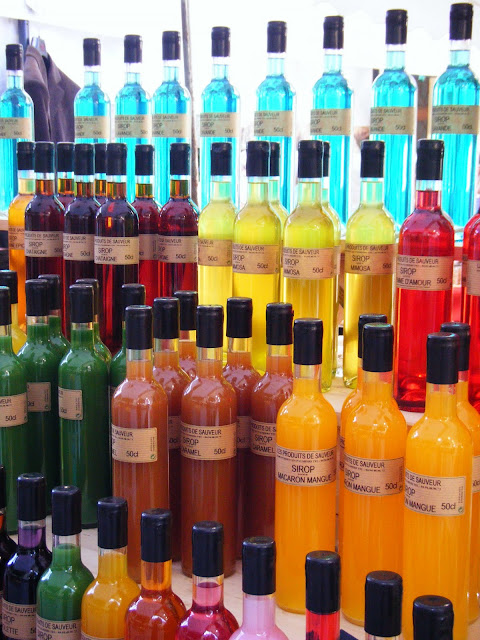 Wherever the site, wandering around the market is a pleasure that seems to be instinctive. However, the markets in the South of France have the added benefit of the sun and luminosity (in winter, when the temperature isn't always that warm!) that also leads to more exotic food stands. 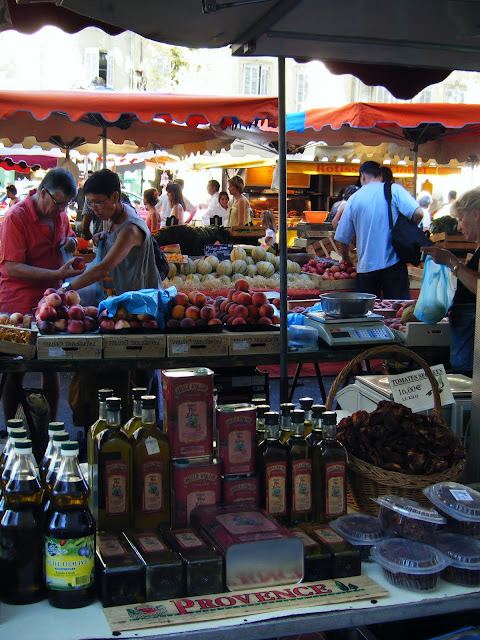 Ironically, just after coming back from the south, a Provençal market was set up here for the weekend - so
some of the warmth made its way up here to the north-east. 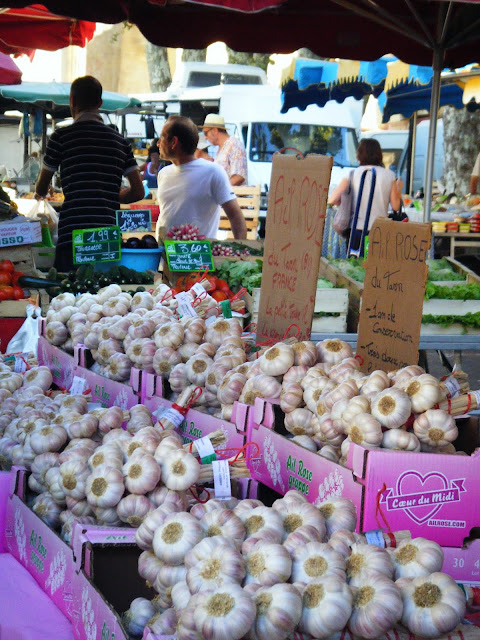 While going to the markets is a fantastic experience of the senses, it goes without saying that it does serve a concrete purpose. From the moment the stands are installed early in the morning, professional caterers and restauranteurs do their rounds to get the best produce. 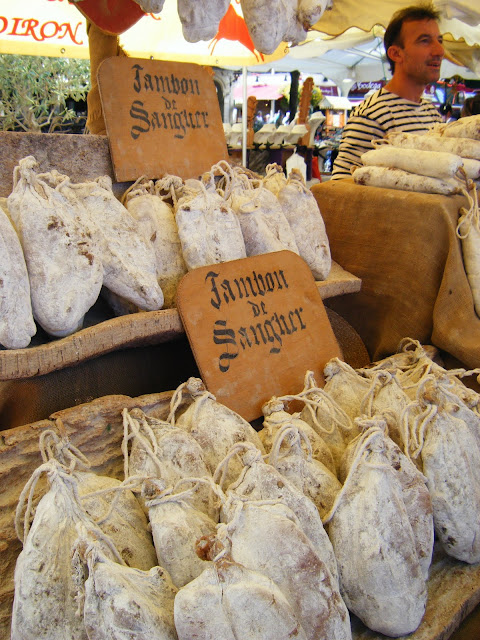 Local producers, paysans, supply fresh products, seasonally or throughout the year. In the winter, when  temperatures fall wherever the market, the stall holders still handle and serve their goods with weathered hands, regardless of the cold, even when chopping up resistant pumpkins. 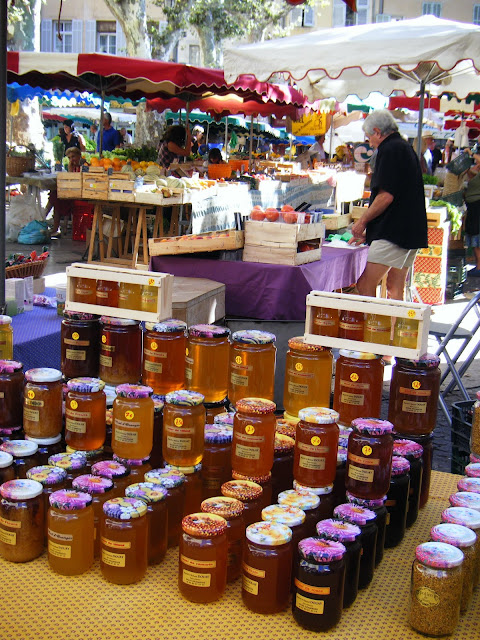 As the French countryside tries to withstand the industrialisation of the landscape fortunately the markets
still serve as an outlet to producers who would perhaps find it difficult to make a livelihood, faced with the competition from the large supermarkets which try to cash in on this desire for produce of  les terroirs. 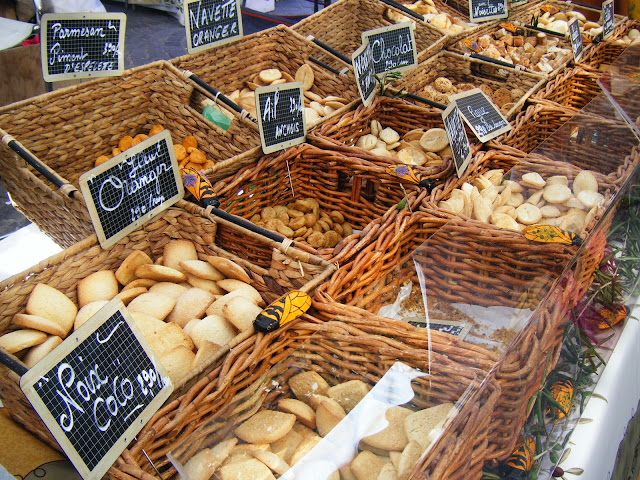 Nothing can really take the place of fresh produce that isn't shrouded in plastic, shrink wrapped or
doused in preservatives. 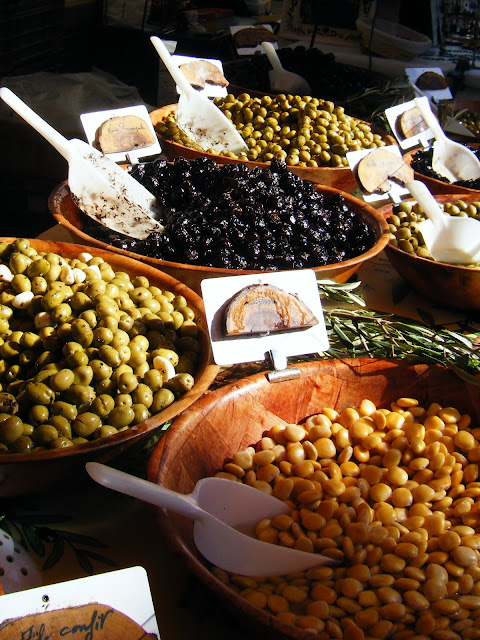 There's also the added bonus of being able to taste the goods before buying - rows of jam and honey, syrup, biscuits, wild-boar ham, olive oil and much more besides....My children had a field day! 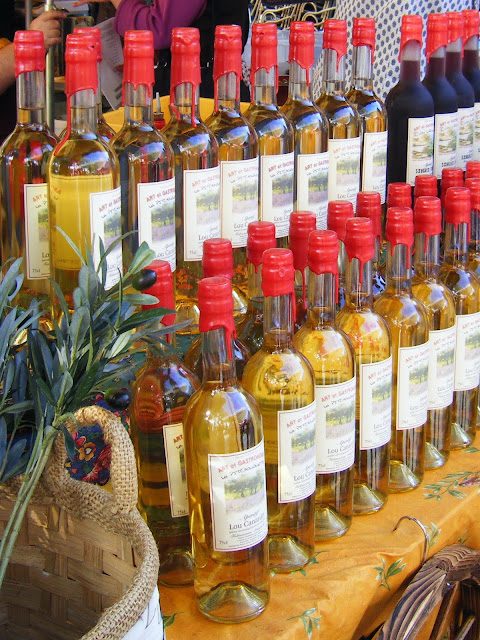