Clearing out and clearing off!


It has to be said that it is very therapeutic to get rid of a lot of old junk -especially when it's part of the flotsam and jetsam of a former life that itself has been discarded for one reason or another (usually a shipwreck).

Any self-respecting magpie would baulk at hoarding, let alone thieving, such volumes of unwanted objects and the faded, jaded memories attached. So it was a great endeavour to clear the (double) garage of this weight of material and wow, did I feel good afterwards!!! This of course entailed numerous donations to friends likely to accept such 'rainy-day use' junk and then many trips to the municipal dump. Not having a car, I used an old pushchair and just loaded it up, repeatedly, looking like something from Steptoe and Son, but quite enjoying the experience, especially in the early morning sunlight.

Once my mission was accomplished I had the luck to be invited to visit friends in Provence and so I gladly accepted, wanting to clear off after all of this symbolic clearing out. And so it was that I managed to get the tail end of the summer in Aix-en-Provence, Ville d'Eaux, Ville d'Art, with friends and I certainly wasn't disappointed with my trip. While the mornings here in the North-East of France are starting to get a little darker and markedly colder, down in the South, they are still hazy with the heat....

Later in the day, the light streams through the leaves, branches and boughs of the plane trees that line the major streets, whilst the water trickles and gushes from the numerous fountains. The pigeons aren't the only ones happy to splash in the water....

This is one of the fountains on Cours Mirabeau - the most famous street in Aix, where the best cafés can be found. Amongst these is Les Deux Garçons which has had a most prestigious clientèle over the years since 1792 - Emile Zola, Paul Cézanne, Albert Camus, Marcel Pagnol, Pablo Picasso and Ernest Hemingway.

Former capital of Provence, Aix derives its name from the latin Aquae, alluding to the Roman springs upon which the town was built up. It was founded in 122 BC as a garrison of Gaius Sextius and soon became the town Aquae Sextiae (Waters of Sextius), based on a Gallo-Roman plan, in order to aid commercial traffc between Rome and Massalia (Marseille). In the Medieval period the town flourished and merchants and dignitaries made of Aix the 'Florence of Provence'. At this time the town was protected by fortifications and a wall which bore 39 towers and it is on the remains of this that the Cours Mirabeau was set in the 18th century.

At the end of the Cours Mirabeau is the large Rotonde Fountain, with its lions and water creatures, spouting water since its creation in 1860 - just visible in the background of the photo above... The fountain is situated  in front of the site of the old casino. The traffic circulating around the Rotonde is pretty impressive, so getting onto the central 'island' to take photos has a high adrenalin factor!

Meanwhile at the other end of the Cours the dignified statue of Roi Réné looks down on the passers-by, and marks the Golden Age of Aix when the town became a centre of culture and learning.

The town is 33km from Marseille, but has a very different feel to this city. There is a dignity and sophistication to Aix although in certain districts it has a small market atmosphere.... The warm colours of the building façades, set off by the bright blue sky beyond is very beautiful and this is only emphasized by the shutters.

I love the play of dazzling light and shadow that runs across all the buildings.Aix boasts a climate that offers 300 sunny days a year! The summers often reach more than 40°. The winter temperatures are rarely below freezing, however the Mistral creates a significant wind-chill factor. 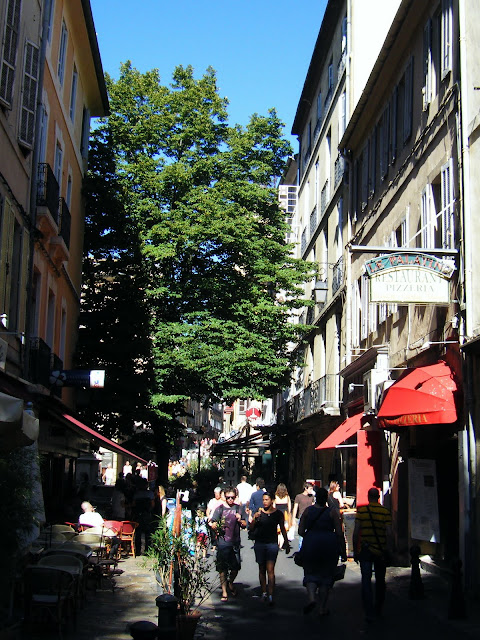 A row of elegant buildings - the windows of which sometimes have caged birds which sing away into the hot afternoon. As a backdrop to the town there is the mountain Sainte Victoire, painted by Paul Cézanne (1839-1906).


The tranquility of the area belies the fact that this region is in fact at the mercy of seismic activity, and from time to time slight temors can be felt. No major incident has occurred for a long time - although the two nearby towns of Lambesc and Rognes were flattened by an earthquake in 1909. 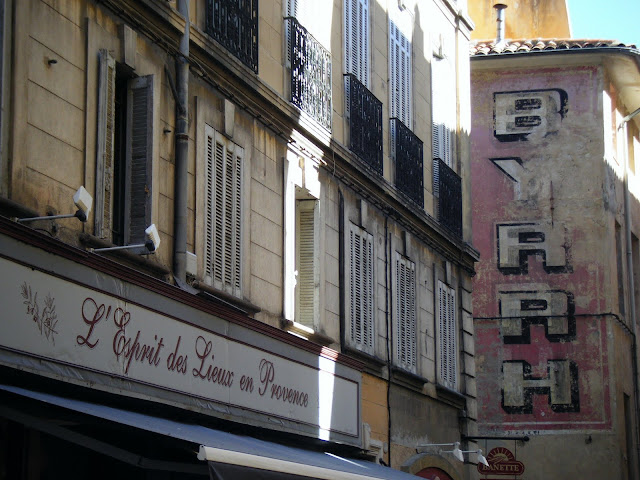 Here are one of the old advertising signs that you can still see, and which add great charm to buildings now, although I suppose they were originally considered to be eye-sores! How tastes change! 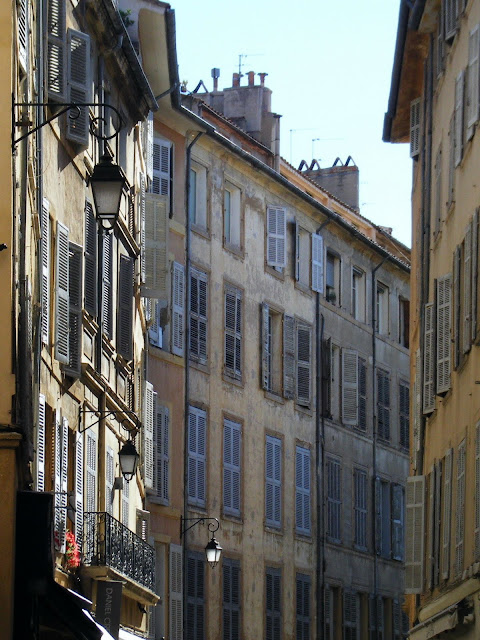 Well, on that note, safe with the spirit of Provence, I shall go to bed! 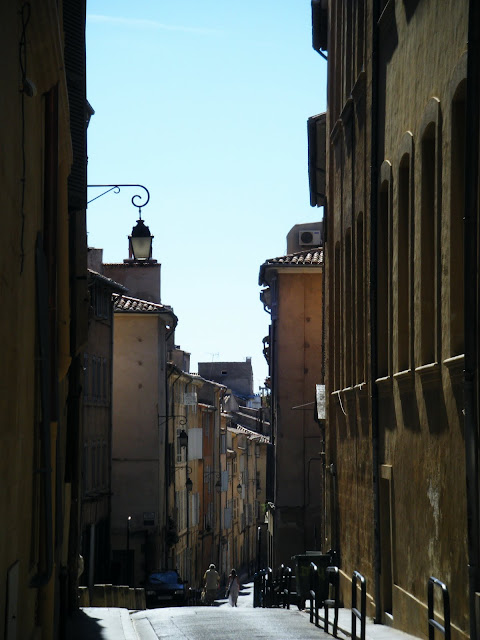