They Shall Not Grow Old.... 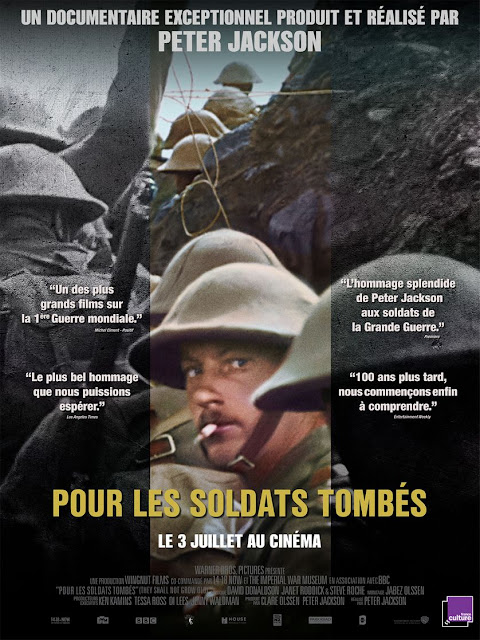 Ever since hearing of Peter Jackson’s 2018 documentary film of the life of the British soldiers on the Front in WW1, I had been very keen to see it. They Shall Not Grow Old was aired on BBC television on the one-hundredth anniversary of the Armistice of 11 November 1918. It came out in France this July…
Stunned viewers are immersed in a first-hand experience of the trenches, based on the impressions left on those who had experienced the «war to end all wars» between 1914-1918. The faded distant past is brought vividly into focus, and injected with colour, sound and lifeblood through the digital restoration and remastering of original 100-year-old footage. Film director and producer Jackson was asked to take on this project which was co-commissioned by 14-18 NOW (the UK arts programme for the Great War centenary) and the Imperial War Museum in association with the BBC. From hundreds of hours of British war footage, taken from the archives of the BBC and the Imperial War Museum, this unique film emerges, captivating us as the voices sound out from the past, and the colour seeps out from the frames to swamp all our emotions.

Not intending to be a historical documentary, with set factual detail of names, dates and place, the film first plunges us into the anticipation and flurried preparation of war. This is presented in stark black-and-white, as hordes of civilians finally set off as ordered troops of soldiers.Veterans’ voices rise up throughout the film, recounting their experience in a harrowingly frank, matter-of-fact way which has not been dulled down and flattened by political correctness. The accents and attitudes vary, yet the sense of camaraderie is overwhelming, uniting a motley crew in the most unlikely manner. As the mud and horror grows in the confusion and inhuman conditions of the trenches, colour suddenly flows into the scenes so that we feel the pulse of life in all this devastation. The red of the symbolic poppies burns out of the dull backcloth of tortured landscapes, just as the blood lies vivid on mud-splattered bodies. All sense of bearings, purpose and logic is lost in the morass of warfare, with its seas of mud, stagnant water and spilt blood. In this blur of lost boundaries and identities, the soldiers start to perceive little difference between themselves and their foe. All are ultimately soldiers in the same war, «getting a job done» on different sides, yet experiencing the same hardships and thus drawing a strange humanity in the most inhumane circumstances.

Peter Jackson dedicated the film to the memory of his grandfather, but as he said, it could have been created in the name of anyone’s loved one from the Great War, irrespective of class, race or nationality. There have been a number of criticisms directed at the film – from the French public at least – claiming that the work fails to mention les Poilus (French infantrymen) and as such is too chauvinistic. However, this was indeed an English film; the numerous mentions of the nice cup of tea and sentiments towards the battlefield beasts of burden – horses, mules and dog leave the viewer in little doubt of that! It offers an account of the Tommy impressions and images of the Front within regiment, based on many voices, not just one narrator who tells his own story of the war. Yet those impressions and images were shared by all the soldiers of the 14-18 War. Furthermore, this generation which sacrificed so much largely drew the same conclusion ; the Great War had led to unprecedented slaughter and had achieved very little. The cruelty and carnage of war have been captured here in this great film, but so too has humanity and beauty, arising like the light, sound and colour under the master direction of Jackson.

They shall grow not old, as we that are left grow old:
Age shall not weary them, nor the years condemn.
At the going down of the sun and in the morning
We will remember them....