A Prime Day for Reckoning...

Despite appearances, I am not on an Amazon-bashing mission! However, as their Amazon Prime Day is about to take place, for 48-hours of frantic shopping, I wanted to consider a few things that have led to a number of discussions here. The flood gates are set to open, and the virtual cash tills ready to rake in record amounts of money, even surpassing sales for Black Friday and Cyber Monday. For Amazon, there are not only huge gains to be made in revenue, but in loyalty too, with membership numbers increasing as basic customers pay a subscription fee in order to gain elite access to the prime deals. It appears to be a golden win-win situation...

Prime Days occur but once a year, but nowadays, almost on a daily basis we seem to be learning of the dire work conditions at Amazon. The end of year festive period already appears to be anything but jolly for the armies of frenzied workers who pack and parcel in order to honour everyone’s Christmas list requirements. You therefore can’t help but wonder what the peak summer-time Prime Days entail for employees, when the heat is on, in every sense.

The massive Amazon warehouses are ominously-called ‘fulfillment centres’, a term that rather recalls the Ministries of 'Love, Peace, Plenty, and Truth' in Orwell’s Nineteen Eighty-Four. Without a doubt, these centres enable Amazon to meet and go beyond the expectations of its millions of customers, just as it has done since 1994. Its product range, competitive pricing, delivery speed and efficiency mean that Amazon wins hands-down in online retail, across the board. But a dark-side is beginning to emerge that taints the present, and hints towards an troubling future.

Ugly stories of pressurized workers, struggling to maintain seemingly unrealistic, almost inhuman targets, timings and deadlines abound, all along the Amazon chain. Orders must be processed within a set time-limit and the momentum of this giant machine must be kept by each and every cog, in an uninterrupted manner. The storage of products and their efficient distribution requires a formidable organisation at each stage to keep this juggernaut rolling. Standardization goes hand-in-hand with optimization and productivity… Unfortunately, the work force here is largely based on fallible human capital, with its flesh, blood, foibles and feelings – for time being at least. Crushed by restrictive time-windows that open and shut with stop-watch precision, obliged to cut corners at every turn, monitored by Big Brother tracking systems, the employees inside and outside the centres feel the burn. In the drive for efficiency, warnings and terminations are swiftly issued to any worker whose performance fails to hit target after training. Curious names are given to the various task workers that start to resemble humble insects, scurrying and toiling away in a parallel universe, that feeds ours. Unloaders remove goods from the trucks arriving at the centres so that ‘water spiders’ can distribute these to the work stations. ‘Stowers’ then stock this inventory into shelving units referred to as ‘pods’ and ‘pickers’ pluck desired items from these, ready for ‘packers’ to box and load them up, for shipment. The group of workers who intervene in areas where robots are at work are sinisterly known as the ‘amnesty team’. Boxes are finally distributed by delivery men using a hand-held device known as a ‘rabbit’. Naturally, significant parts of this vast process of customer fulfillment relies on intelligent automation – robotics – and elaborate computing. In the search for increased and improved performance, and faced with the growth of scale and pace of its activities, Amazon is surely set to hand-over ever greater responsibility to state-of-the-art technology. Not only will this revolutionize the shop floor for online retaillers, but will also lead the way for their giant bricks-and-mortar competitors such as the mighty Walmart. More important still, this practice will set a pattern for industry and commerce and in general, just as ground-breaking as Ford’s assembly line in production.

Although Amazon has not yet implemented a management by algorithm system, it is leading towards a structure that relies heavily on I.A and A.I. Indeed, Amazon has already acknowledged that the idea of a ‘lights out’ warehouse is already on the map; for the moment they must wait for high-tech to deliver the means to roll this out. At the dawn of this brave new world, job losses are to be expected, as human workers are let go - their manual tools laid down at the feet of machinery that affords incomparable speed and efficiency. Amazon need not even lay workers off, since the work conditions are already such that all but the most desperate employee would gladly leave of their own accord in many cases. Certainly, given the menial, mind-blowingly repetitive, poorly-paid, often hazardous nature of the work, it would be preferable for all concerned to hand it over to sophisticated automation. Since this work is so dehumanizing, why should a human work force be shackled in this way?

But that leads to the next question; what of the redundant workers? Technological unemployment is nothing new; already in 1930, John Maynard Keynes drew attention to "unemployment due to our discovery of means of economizing the use of labour outrunning the pace at which we can find new uses for labour". Naturally, new jobs will be created in fields that we cannot yet envisage in this unchartered territory, but will these be notably more fulfilling for the individual concerned or yield better results for society overall? For many ways yes, as technology opens up a world of exciting, challenging opportunities to facilitate work and improve conditions. Computors – however smart – cannot, as yet, do everything and will still require human intervention. But that is not the whole story….

Everything is geared towards consumer satisfaction, profit margins and boosting economies, but there is more to life than purchasing goods and services and corporate bottom lines. Society is held together by far more than the latest intelligent device – sociable or not. A small but significant example; the cash tills that are being dropped in favour of scanning decks. Give me a human cashier any day for basic shopping transactions! How is simple human contact going to be maintained through creepy digital personal assistants such as Siri, Cortana and Alexa? What satisfaction can former cashiers possibly glean from standing up all day, supervising the very scanning device that replaced them? Training and education will undoubtedly open many possibilities, but could these cater to everyone’s needs? What of those people who no amount of coaching and teaching could ever adapt to modern work expectations because they simply do not have the intellectual faculties suddenly required? What about workers who were perfectly content and suited to doing the dull, routine work that has been suppressed or is now carried out by some I.A?

No doubt Amazon will break records over the next two days, but I wonder where this will all lead us… and them. It feels as if a day of reckoning or reflection is long-since due. We relentlessly consume to excess and fail to notice that in this process we are perhaps letting humanity get sold short. Ironically, Bezos - occasionally referred to as the 'anti-Christ' of the workplace - initially wanted to name his company 'Relentless', but opted for Amazon instead. Either way, the flow is ceaseless, carrying us along, sweeping away any obstacle that slows it down, but drowning much of what is in its path too. 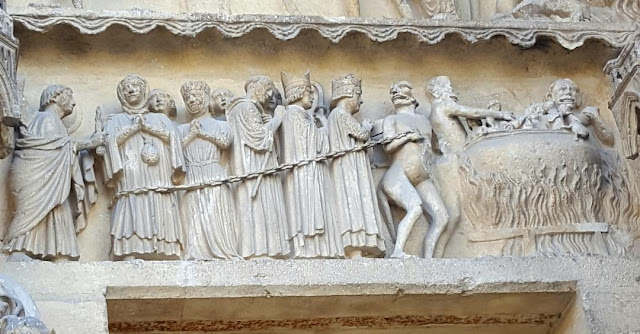