The Highs and Lows in Paris.... Les Catacombes de Paris... 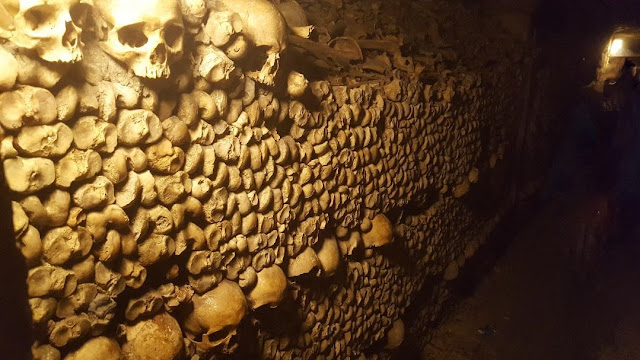 The weather has changed as the summer is drawing to an end, and yet only a few weeks ago the heat was stultifying. In an endeavour to have a brief respite from temperatures that seemed stuck at 30° +, I decided to go underground, into the depths of Paris. 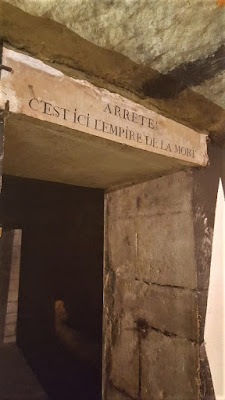 With their allure of a mysterious, macabre underworld, the galeries of Les Catacombes de Paris have always drawn in vast numbers of the public since the beginning of the 19th century. This unique site had certainly always attracted a friend of mine who had never had the occasion to visit - until this August! It wasn’t my first tour; once my children had discovered Dr Who, I thought they would appreciate a trip here, along with a visit of Les Egouts de Paris (the Paris Sewers Museum) for good measure. I still have vivid memories of one of the Dr Who classics; 'The Talons of Weng-Chiang' from 1977, with the giant rats occupying the Victorian London sewer system. However, it was the more recent Dr Who episode, Blink, some thirty years later, with the terrifying weeping angels that really marked us all, alimented by a visit to see the old graveyards in Birmingham! Suitably scary...

It is not surprising, perhaps, that of the 500,000 visitors (2016) to this site, a third of these are under the age of 27. Many of these, I presume, will have grown up with a staple diet of Netflix series such as The Walking Dead, American Horror Story and the like, and for whom Dr Who must seem very staid and stodgy indeed. Well, the queue for this latest visit was truly horrifying in itself, winding around from the entrance backwards, well before the opening hour, coiling on itself to the point that the end almost reached the head, like the mythological serpent uroborus. After over two hours’ wait, we finally went beyond the dark, rather unassuming entrance that eventually leads to the Empire de la Mort and wended our way down the 130 steps of the spiral staircase, through to the network of tunnels, some 20 metres below the surface. 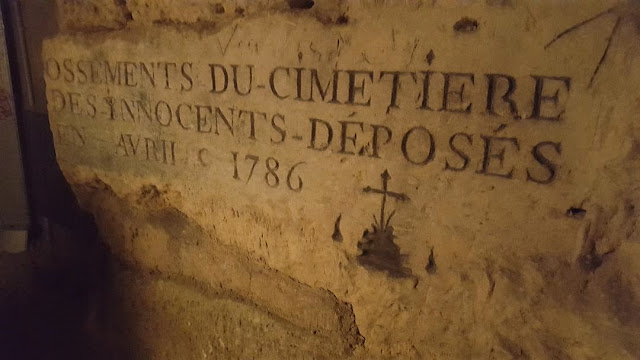 The narrow passageways slowly incline, following the streets far above in a network referred to as ‘la doublure de Paris’ (the lining of Paris). The passages are punctuated by signs left by architects and inspectors, indicating the work site number and year, and carved with their initials. Behind the stone walls is a vast expanse of empty space from the underground quarries, and one part of the journey – the atelier - reveals part of the quarry. Indeed, long before the catacombs were established at the end of the 18th century, this whole underbelly of Paris had offered the city a limitless supply of limestone for building construction with gypsum and chalk for plaster over the centuries. Quarry work had initially started in the gallo-roman period around the mountain of Saint Geneviève and the hillside of Montmartre, but the construction of vast edifices such as the Louvre and the cathedral of Notre-Dame in the Middle Ages required ever greater supplies of building material. When these extensive underground quarries were abandoned at a later date, accidents were common. Galleries would simply collapse, and their implosion left gaping holes that swallowed up all that was above. This reached a crisis point in 1777, whereupon the first Inspection Générale des Carrières (IGC) was set up to map out the networks and consolidate the areas at most at risk. Under Napoléon, all quarrying was forbidden from 1813. Despite these measures, further collapses have taken place ever since – the most striking of these being in 1961, with 21 deaths – and the IGC continues to carry out numerous interventions to the present day. 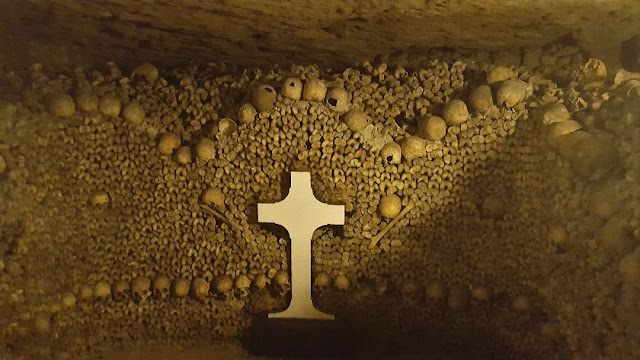 As the population of Paris rose from the Middle Ages, the city struggled to house its inhabitants, both living and dead, in a limited surface area. The deceased were traditionally buried around the church but the demographic growth resulted in insalubrious conditions as the dead and alive were increasingly brought into contact in ever-confined urban spaces. Land, water and air were contaminated with decomposing corpses, resulting in disease and death just as would be the case much later in Victorian England. In Paris, crisis point was reached in the 1760s, when Parliament called for the closure of the city burial grounds. However it was the sordid state of the Saints-Innocents cemetery at Les Halles that finally resulted in concrete action in 1780. The sheer volume and weight of dead bodies had caused residential cellars to cave in , whilst prostitutes plied their trade in the cemetery itself. 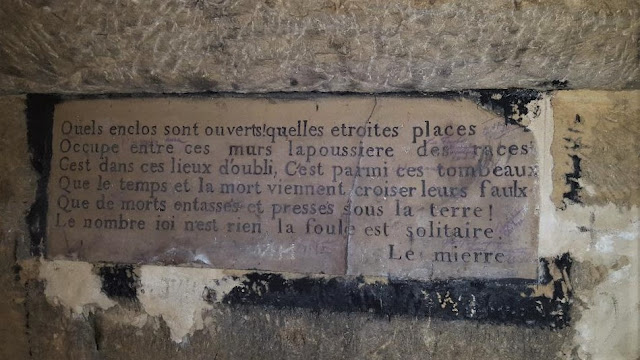 And so it was that Paris was faced with the joint problem of unwanted, unhealthy volumes with its dead populations above ground, and then the perilous voids of the disused quarry sites below. From 1785 until 1787, the remains from the Innocents cemetery were exhumed and transported by cart, from dusk till dawn, to the quarry of Tombe-Issoire and were spread along the galleries. In the years during and leading up to the French Revolution in 1789, the countless victims of political violence were deposed there too as it became a make-shift morgue. To these were added the bodies exhumed from churches seized by the State and, later still, would come the remains of those ousted from their final resting place due to Haussmann's vast urban projects in the 1860s. 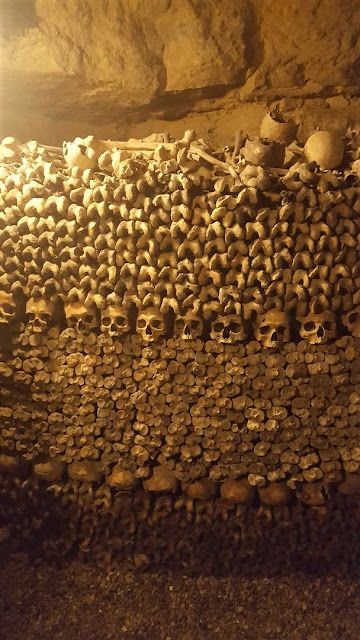 On the demise of the first Inspecteur Général des Carrières in 1807, the position was occupied by Héricart de Thury (1776-1854), the man responsible for creating the Catacombes much as we know it today. He quickly noted that the site was in a state of ‘imminent peril’, as the pilars threatened to collapse, the ceilings (le ciel) were likely to give way as water seeped into the stonework, and the air became heavy and noxious. Above all, de Thury sought to make of the catacombs a site to respect the dead with an appropriate sense of decorum rather than a basic ossuary. Toscan pilasters decorate the path between the higher and lower catacombs, leading to the entrance of the Empire of Death. From here, de Thury set upon the project to arrange the bones in a striking manner, producing a dramatic effect as banks of the femur, tibia and humerus bones are laid out in layers, interspersed with skulls to create walls (les hagues) along the passageways, behind which are piled thousands more bones. Ingraved stone signs, like strange street signs in this underworld, indicate from which district the bones originated, giving some indication to the lives and deaths of this huge mass of individuals. 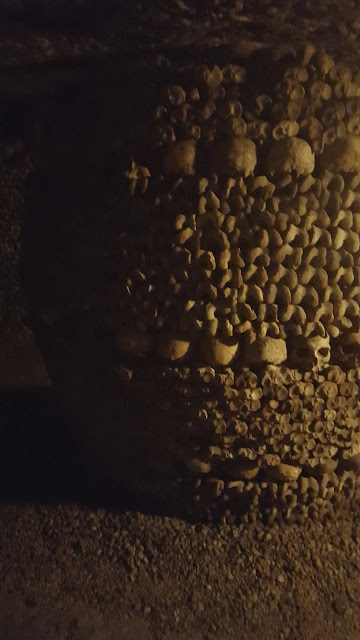 The Crypte de la Passion is a vast barrel-shaped supporting pillar, decorated in tibias and skulls. A suitably Gothic nocturnal concert was organized around this massive form in 1897 with Chopin’s Marche Funèbre and Danse Macabre by Camille Saint-Saens played to the enthusiasts. Amongst the ossuary is set the fountain discovered at the end of the 18th century - baptised the Fontaine de la  Samaritaine. Black and white pillars add a somber effect whilst the numerous inscriptions from the Bible, poets and philosophers add a reflection on the fragility of life and the inevitability of death.

The whole site is carefully monitored and managed for the protection of the visitors and the catacombs too. There is little chance of the hapless tourists getting lost in the obscurity of the labyrinth system today, as the catacombs are separated from the 250 km network of galleries. Lighting and runways lay out the path to follow, so each modern-day Orpheus can head out of the underworld, unscathed as he re-emerges from rock that dates back 45 million years. The temperature is an ambient 14°and humidity levels are carefully tracked, as is the CO2 throughout the 11,000 m2 area. It is vital to preserve this unique environment which is particularly sensitive to deterioration. Bones are regularly moved around to withstand these specific conditions – fortunately these are in ample supply!

Guides and guardians make sure the visitors respect the setting, and the nature of the site – for even if it is not a cemetery per se, it is not merely a museum either. The remains of some 2 million individuals lie here – all of whom had lives, loves and ambitions of their own before coming to this final resting place. The lasting memory of my first visit here, was someone being caught at the exit, having innocently filched a skull that he had ‘found’, and kindly concealed in his backpack ! The site has been modernized since then, with a souvenir shop for those who wish to go home with a little memento. A skull ashtray, anyone ? 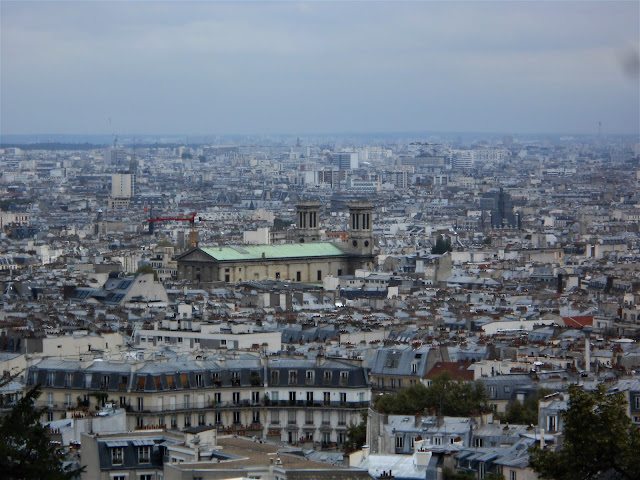 Once we had left the Catacombs we tracked off to Montmartre for a panoramic view of the city, having seen its sober underworld. The highs and lows indeed! 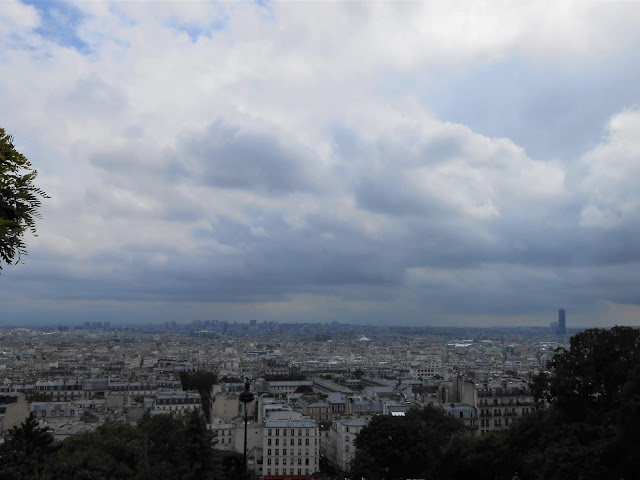 PS
The irony of the day in Paris? The weather had changed overnight, dropping by literally 20 degrees - we were freezing as we queued up!
Posted by Beach-Combing Magpie at Wednesday, August 29, 2018

Email ThisBlogThis!Share to TwitterShare to FacebookShare to Pinterest
Labels: Cemeteries