From Hermonville to Holden... From Places to Names...

Before my newly-acquired second-hand car faded out on me, very prematurely, I had been exploring the country villages around Reims. One of these was Hermonville, some 15 kilometres away. Unfortunately, as I had not expected to lose the car, I did not take the photos that I could/should have done at that time, so the few I have here will have to suffice!

Despite its present-day sleepy, bucolic appearance, one hundred years ago it was a small, but vital part of the backcloth in the enactment of the deadliest warfare scenes Mankind has ever experienced; the Great War. Amongst numerous villages of northeast France, Hermonville became yet another of the panels in this vast patchwork of battle terrain. Over the 14-18 period, swathes of forest and farmland were hacked up to create a crazy quilt of barrenness and brutal destruction, punctuated by plundered towns, cities and villages alike. Reims itself became the symbol of the martyred country, with its burning cathedral as the image of violation and its ravaged streets of shattered buildings and pocked-marked façades spelling out the tragedy that would befall much of France. 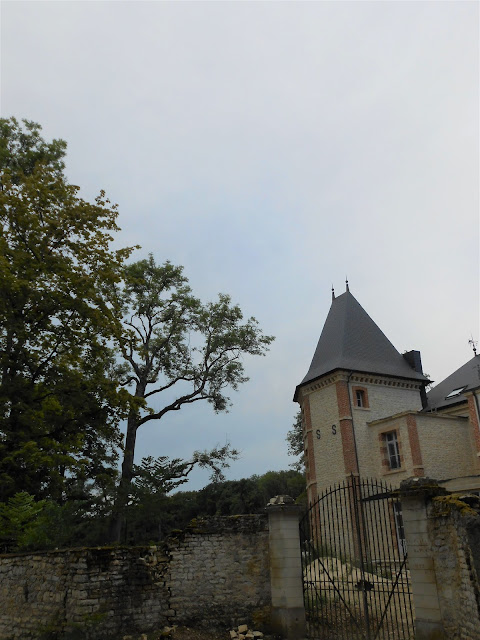 Cited as one of the oldest villages in France, Hermonville came to prominence in the Middle Ages but was renowned far later for its rather impressive collection of seven châteaux! Most of these imposing edifices were to fall in the Great War years, despite having survived the collapse of the Napoleonic empire, and the arrival in the village of thousands of Prussians in 1814. It was here in Hermonville that a military base was established at the start of wartime activities, a century later, in 1914. One of the poilus – a French infantryman – Gabriel Guérin remarked; 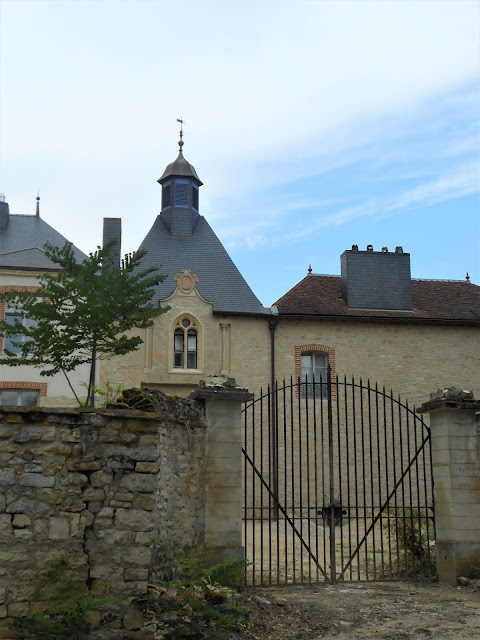 A training camp was subsequently set up for special missions of military intelligence and the strategic sabotage of enemy logistics; Hermonville in effect became a ‘nid d’espionnage’. While the latest ordnance offered possibilities of power and devastation of unprecedented, hellish proportions, most of the hard graft was nevertheless carried out on the ground by Man and beast alike. Soldiers died fighting to preserve mere patches of land that were soon regained by enemy forces. Again, infantryman Guérin remarked on the cruel irony of the footman’s fate, this time when endeavouring to save the village of Loivre, some 7kms from Hermonville, in mid September 1914: 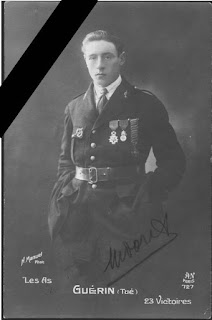 Going through Loivre or Hermonville today, little initially indicates the turmoil and trauma previously visited on these villages. Sweeping vineyards have long since cloaked the troubled soil and traces of the past, this other country, far removed from the alluring, reassuring landscape of wine trails and routes touristiques of the modern-day Champagne region. Other villages have simply disappeared; struck down by warfare all those years ago, never to rise again. Their names, when recalled, merely evoke the circumstances of their destruction and no longer refer to living entities, merely to their obliteration. Yet the vestiges of the Hermonville châteaux, that emerge from the undergrowth, the enigmatic ruins that mark the surrounding landscape, and the rows and rows of neatly-aligned crosses in the war memorial grounds testify to a life before, during and after this pivotal episode in history.

The names of the majority of the actors in this theatrical play of savagery and insanity are unknown or unfamiliar to us now. Yet the words and faces of these individuals reach out across the years, still speaking out. Gabriel Guérin died almost one hundred years to the day – in August 1918 – at the age of 26, but his account of the war years lives on, in a strange, timeless manner. His great feats as an aviation ace seem almost irrelevant now, yet his own thoughts and reflections ring out through time, making us question and re-assess our lives and times too. In this strange, continual process of change and regeneration from loss, life and even History seem to evolve, moving in time and space, yet bearing the ties to the past.

The château of Toussicourt, in whose grounds Guérin and his fellow foot soldiers had once been emcamped, did not escape or survive the hostilities. All that remains today is a haphazard scattering of masonry. Nevertheless, the post-war reparations that were paid out to compensate the loss of the château led to the revival of another great war casualty; the Musée-Hôtel Le Vergeur in Reims. The rémois gentleman explorer, Hugues Krafft (1853-1935), spent his compensation payment on the restoration of the war-torn, ruined building, bringing it back to its pre-war state. Again, little indicates the devastation of the past when visiting the Hôtel Le Vergeur today, and yet...

When I was looking into the fate of the Hermonville châteaux – I came across the Château de Marzilly, just outside the village itself, set in a fairy-tale landscape. Having been left in a pitiful state for many years, it has now been restored to become a château… for the 21st century! However, a leap back to the latter part of the 19th century, reveals that the Château de Marzilly was apparently the home to the English industrial philanthropist, Jonathan Holden (1828-1906). Obtaining concrete information on aspects of this man’s life is proving to be quite difficult, so whilst waiting to confirm his ownership of Marzilly (as opposed to one of the other châteaux at hand), I will not venture too far… I did speak to the present owner of the Marzilly estate, who kindly proposed a future visit, so I am excited at that prospect, needless to say!

I certainly remembered the name Holden as being associated with the small library at the end of my old street, and as being rather un-French, but knew no more. As it turns out, the Bibliothèque Holden was built to commemorate the Golden Jubilee of Queen Victoria of 1887, and was the first public library to be opened in the city of Reims (and the first to be frequented by my children!). I find it fascinating to think that this Bradford-born individual made his way to Reims and was to shape the work landscape and lives of hundreds of employees who inhabited districts still visible today, in their modern forms. Holden was indeed the director of a large wool-combing factory set up by his uncle, Isaac Holden, in the 1850s. The latter, an inventor and manufacturer of remarkable insight and talent - cited as the creator of the Lucifer match  - was an entrepreneur with great vision and ambition. The Reims site was part of a substantial business, with other factories in St Denis, near Paris, and Croix, near Lille. These were all established to meet the demand in the European market for wool, and all expanded rapidly, representing a considerable source of employment for the cities. By the 1870s, the Holden factories in England and France had become the largest wool-comber entreprises in the world. Nevertheless, the renown of this trade has not survived the passage of time here in Reims; it has simply been forgotten.
As I was just marking my twenty-seven years of life here, I thought of the challenges the Holden family must have encountered in their ex-patriot existence. I learnt of Holden’s aunt Sarah (Isaac’s wife) who despaired of the “barren and solitary soil of France”,whilst her husband took pleasure in "this lovely country". Isaac and Sarah finally returned to Bradford to tend to affairs there - not least their  Wesleyan charitable interests - leaving nephew Jonathan to set up the ‘Nouvel Anglais’ site in Reims. A philanthropic drive appears to have been as ingrained as the family’s Methodist beliefs and wholly shared by Jonathan. The provision of education, training and social improvement was central to the Holden business venture and vision ; financial gain alone was not sufficient. Isaac Holden was even the founder and first president of the rémois Bicycle Club. The desire for an impressive home may have been a family trait too. Sir Isaac Holden had an ambitious stately mansion built "in a pleasing style of architecture" (according to later auction details), finally completed in the late 1870s. Sadly, like the Château of Toussicourt, nothing remains now of Oakworth House, Keighley, but for a few stones and the beautiful grounds - now Holden Park. The mansion burnt down in 1909, proving once again that nothing lives forever, yet nothing dies completely either, least of all interest and curiosity, I hope. 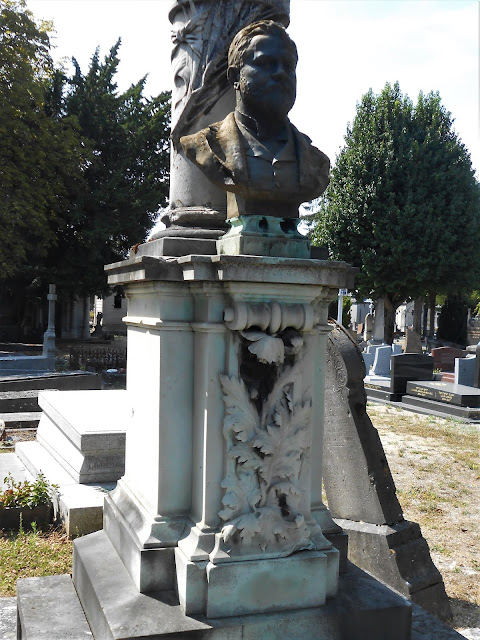 The tombstone of Jonathan Holden and his son, another Isaac, is to be found in the cemetery just along my current street. The earthly remains of Isaac, however, did not stay on French soil but were exhumed and taken back to Bradford before the turn of the century. Oddly, during my cursory research into the Holdens, both French and English records claim that Jonathan died in France or England respectively. Perhaps it is not really relevant - either way the tombstone here is slowly being leached of its engraved letters, fading away yet not forgotten, I trust. 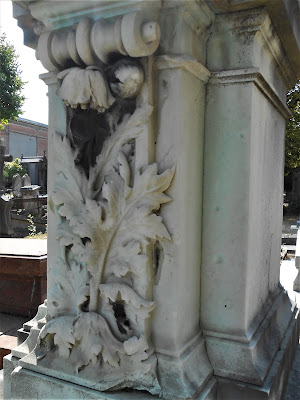 I am looking forward to returning to Hermonville, tracking down the Château de Toussicourt, exploring the Château de Marzilly and discovering more places outside the city. For the moment I can still find things that catch my attention within Reims; all these criss-crossing paths laid out around us, linking past and present, the far and the near, like so many threads...