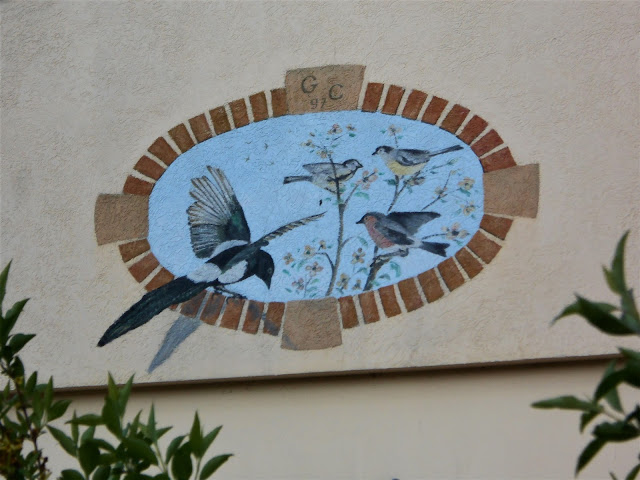 As I was travelling along a very humdrum bus route to an equally uninspiring shopping centre, this striking magpie mural caught my eye. Painted on an otherwise unremarkable wall at the end of a street of samey detached houses, this is the kind of creative gesture that I love coming across. Placed high up this plain expanse of wall, it might not initially be visible to all - certainly not car-drivers, but there it is, a discreet little gem that seems to have been 'stolen' from somewhere else. Almost as if a thieving magpie had lifted it from its rightful home.... 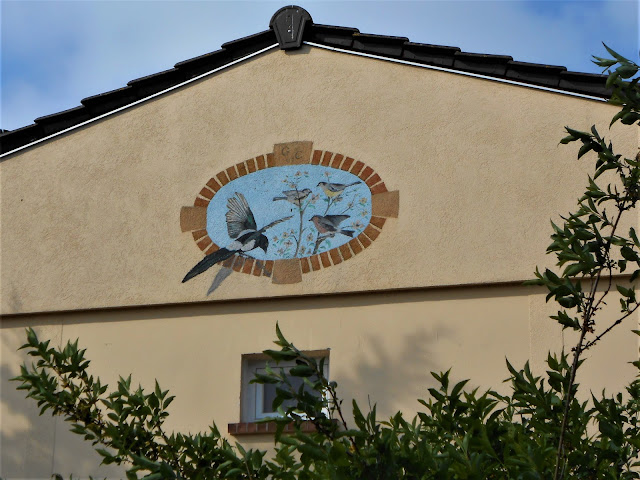 It is a pleasure to see something that has emerged from the simple desire to leave a curious trace of beauty in a place where it is least expected. Art for art's sake, serving no other purpose other than that of marking aesthetic interest without any form of gain, sometimes seems rare indeed. Apparently this was painted in 1997, in which case it is standing the test of time very well and did remind me a great deal of the colourful façades in Rue Crémieux, Paris. 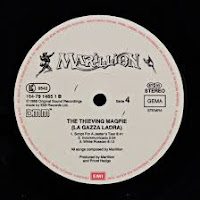 This in turn reminded me of one of my favourite groups in the 80s - Marillion - with their The Thieving Magpie album. The overture of the opera La Gazza Ladra by Rossini (1792–1868) was used at the opening of their concerts during the Clutching at Straws tour 1987–1988. The group was introduced to me as a logical step-up from Genesis (with Peter Gabriel) but I thought, and still do, that Marillion was generally better in terms of lyrical content... I did see them at Hammersmith when Fish was still lead singer, but I can't even remember the year now which is quite weird. However, listening to the tracks today teleports me back to that whole period... which actually feels even weirder still because it brings back everything - the social settings and circumstances, sounds, sights, smells - the lot!