An Aqueduct to bridge Time and Space.... Roquefavour 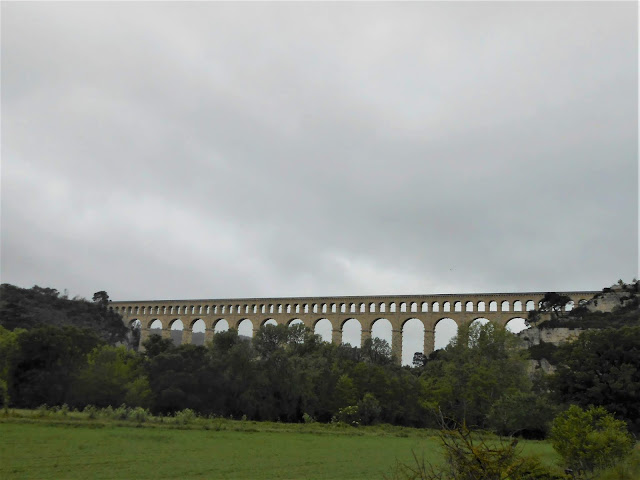 As I was staying in the countryside just along from Aix and Les Milles in Provence, a modest road sign indicating a nearby aqueduct kept catching my eye. Towards the end of a very wet Sunday afternoon, we went to investigate... 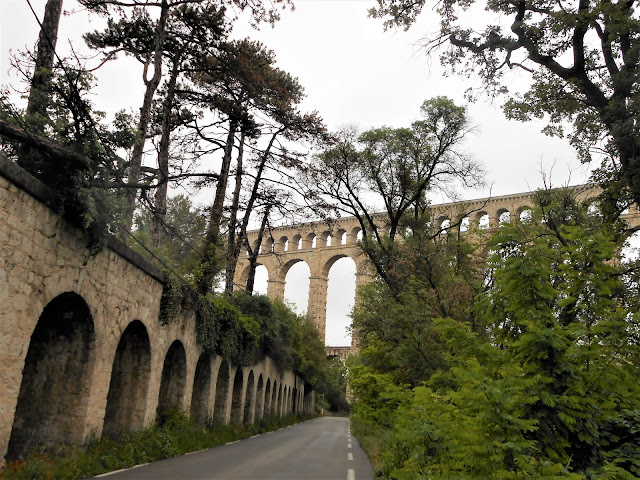 Even in the dull light, the sight from a distance was impressive, with the aqueduct spanning the whole valley, towering over the green fields and road below in the commune of Ventabren. One can only imagine the awe and wonder it inspired at the time of its construction in the mid 19th century. 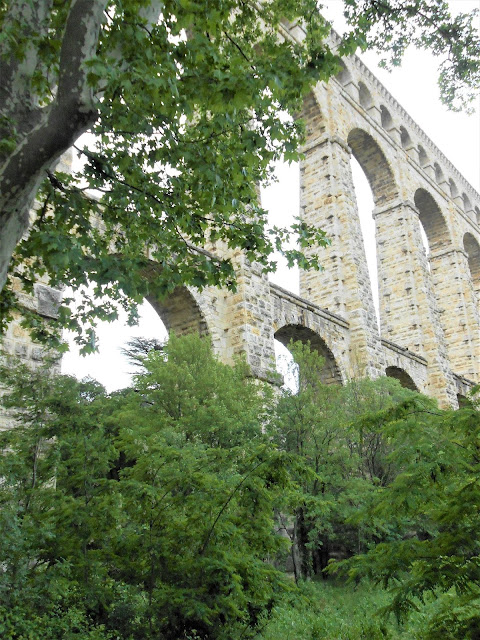 In fact, this is an aqueduct that is remarkable on several counts. This is indeed the largest stone aqueduct in the world - it is an incredible feat of engineering and aesthetic beauty - from afar or up close. 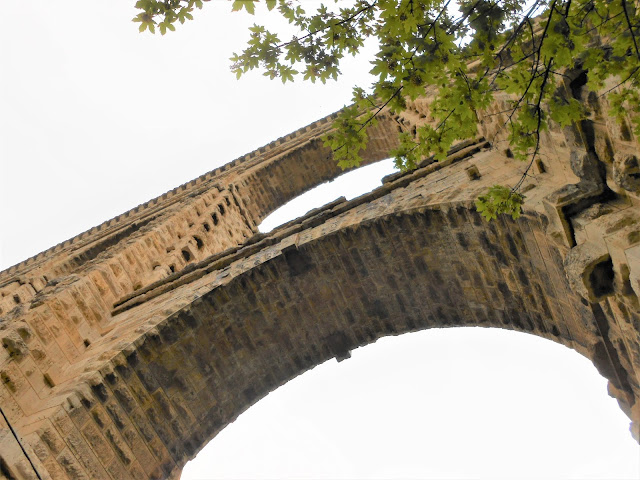 Despite being even more ambitious in dimension than the Pont du Gard, Roquefavour is frequently overlooked, seemingly overshadowed by the renown of its ancient Roman predecessor. Both are set out in a three-tier design with rows of arcades that stand out so dramatically against the skyline. Roquefavour measures almost 400 metres in length and 82 metres in height, compared to Pont du Gard's 270 metres by 47... Both naturally serve the same practical function as the very first aqueducts of ancient Rome; the supply of water. 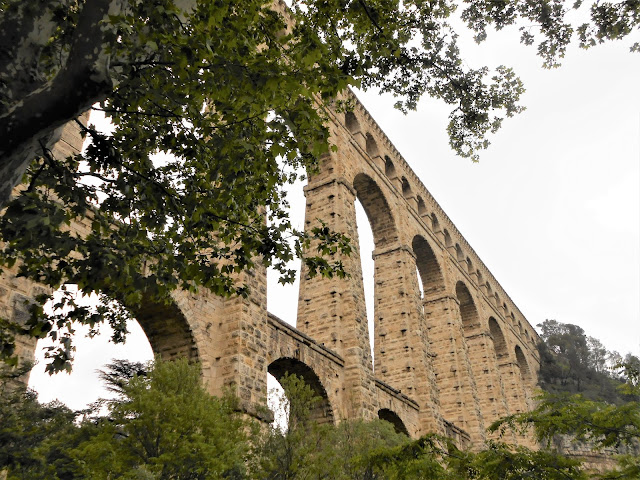 The Pont du Gard was built to cross the gorge of the Gardon river in order to convey spring water from Uzès to the Roman colony that would later become Nîmes. Some 18 centuries later, the Roquefavour aqueduct was constructed along similar lines. It successfully bridged the flanks of  the Arc river valley, carrying much-needed water from the Durance river, along the Canal de Marseille, to the city some 80 kilometres away. Marseille was continually blighted by drought, having suffered the same fate for centuries and was furthermore beset by a cholera epidemic in the 1830s. An adequate water supply was vital and the Pont du Gard served as inspiration in the solution to this problem, thus spanning the centuries between the ancient site and that of the 19th century with the creation of the aqueduct of Roquefavour. 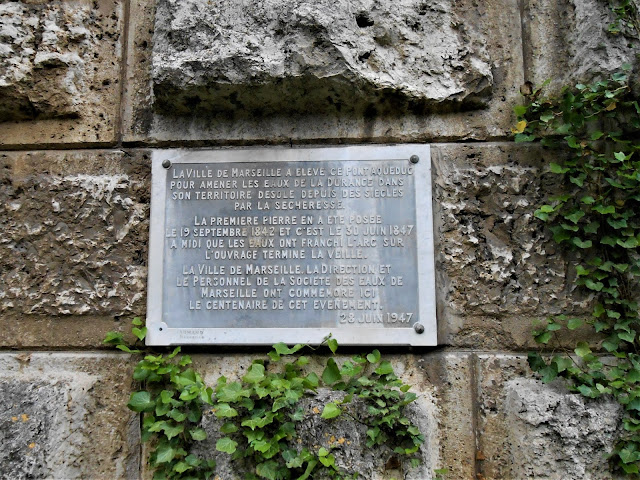 As the plaque on the aqueduct's pillar indicates, the watercourse was completed in a mere five-year stretch, with the project led by a young engineer (Franz Mayor de Montricher) who was but 26 years old in 1842! The  Canal de Marseille was virtually the city's sole source of water until the 1970s. 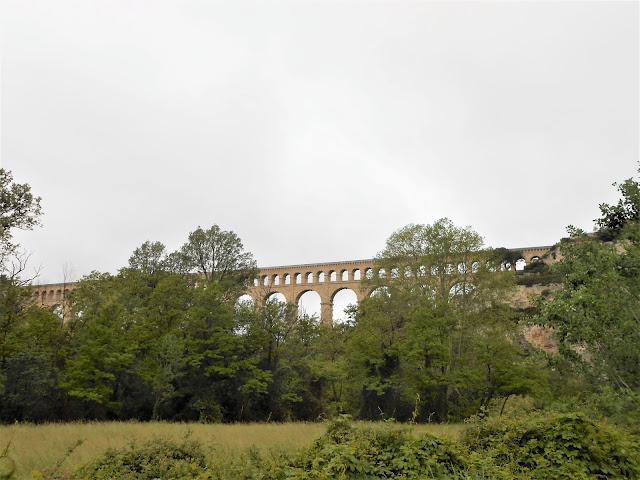 Visitors can climb up a path to reach the top of the aqueduct and then gaze across the Provençal landscape. Any plans for this were scuppered by the rainy weather that day, but even the darkest, wettest spells might lead to magic, in the form of a rainbow. And this indeed was the case, when I was treated to a perfect arc above the mountain of Sainte Victoire! 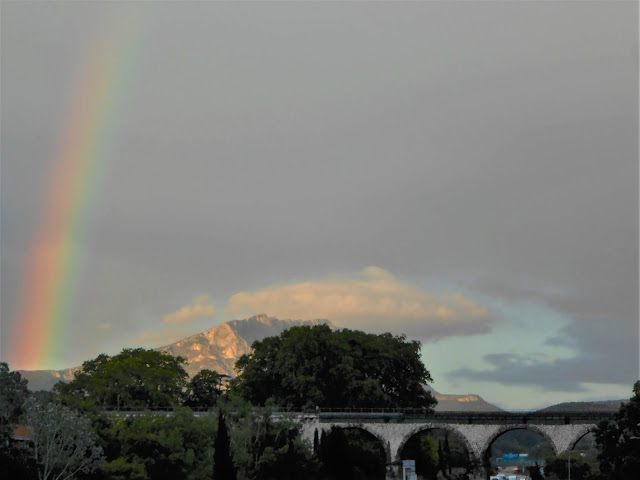