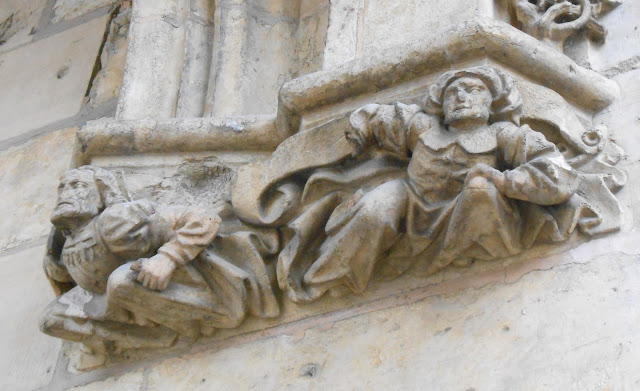 I recently heard of the beautiful Art Déco buildings in the town of Saint Quentin in the region Nord-Pas-de-Calais-Picardy, so was curious to see these. 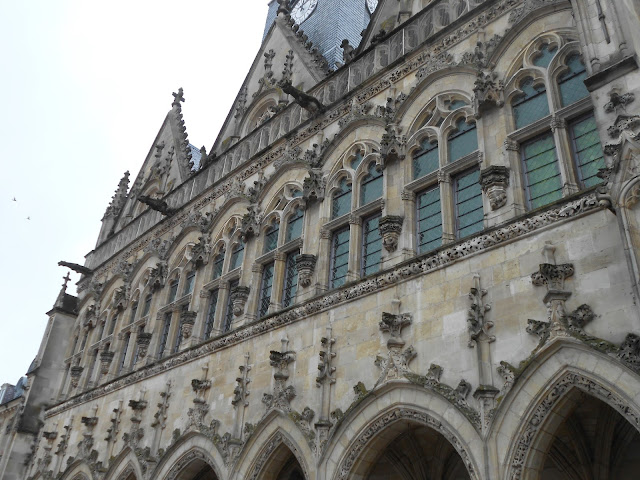 As it turned out, on the grey, overcast day that I visited, I didn't come across anything remarkable. 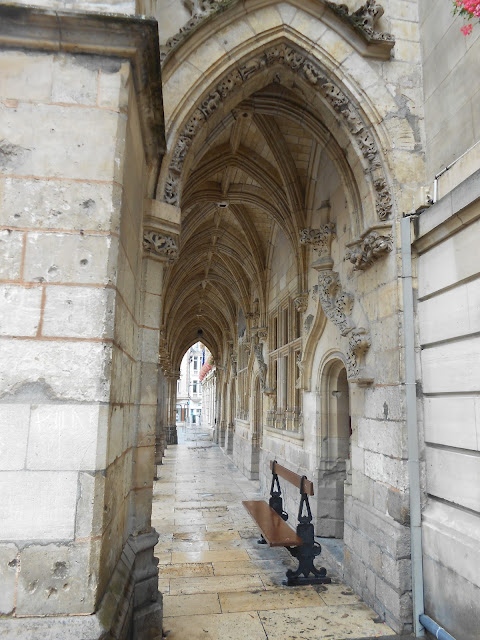 However, that may be because there are a number of very striking buildings and façades here in Reims so that has made me more difficult to impress. 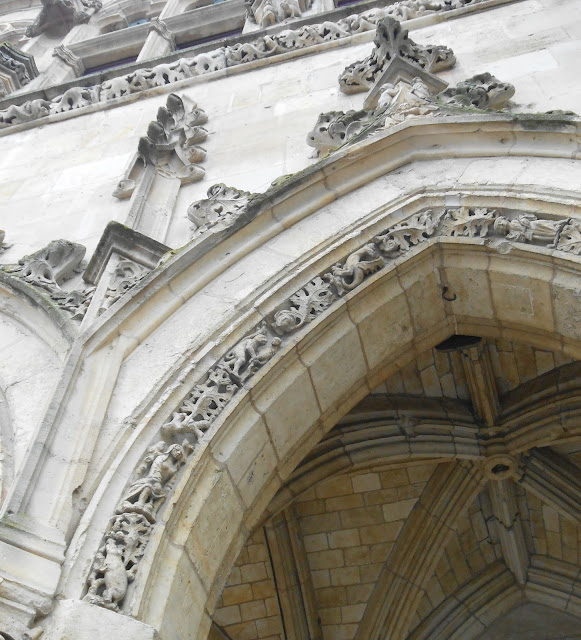 Also, I might not have found the area where the best Art Déco examples actually were. 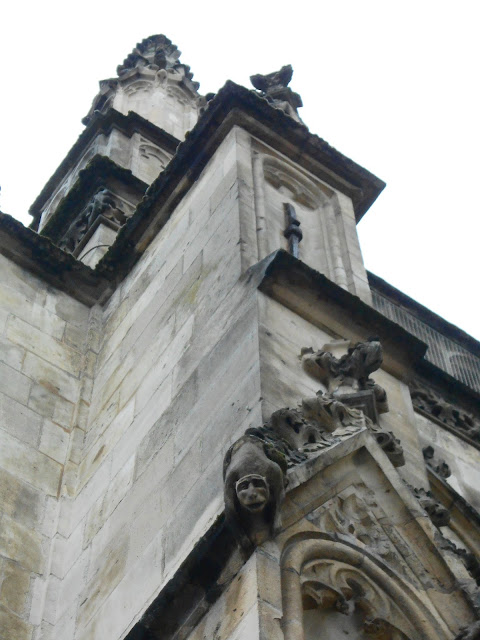 The weather did nothing to encourage any kind of wandering; quite the contrary. Nevertheless, the trip was certainly not wasted as I did see the magnificent Hôtel de Ville. 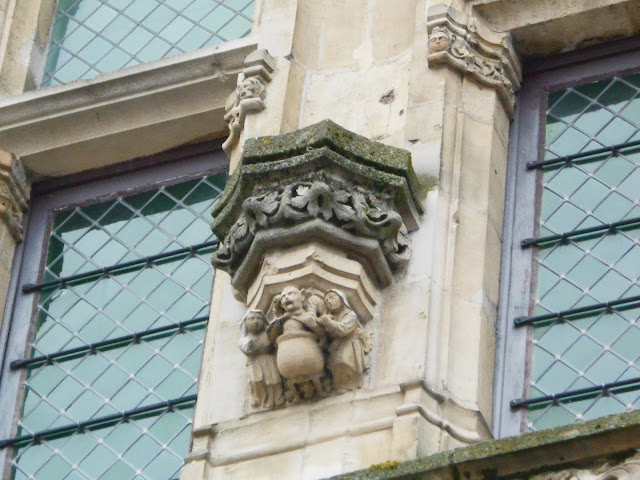 This town hall dates back to the 16th century, although prior to that, the site was occupied by another building of civic function, as aldermen gathered to discuss various affairs. 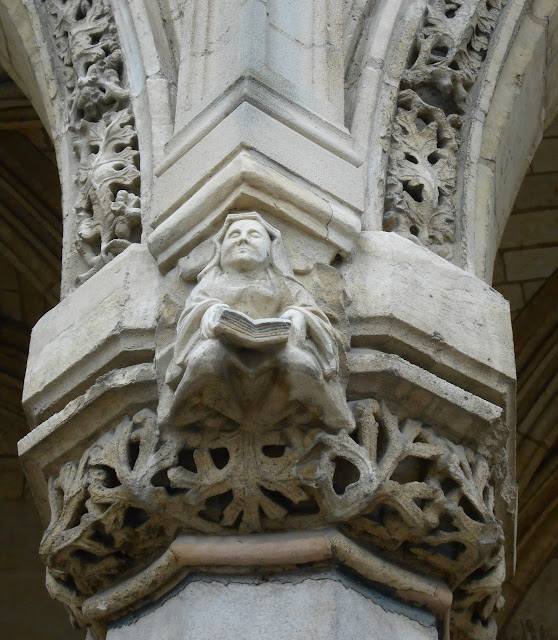 The current edifice was completed in 1509, and its flamboyant Gothic style dominates the work, whilst reflecting the transition towards the Renaissance. 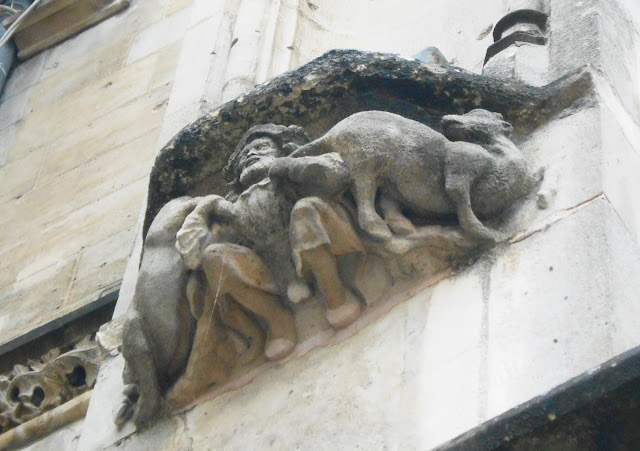 The whole is quite harmonious, with the façade divided by six octagonal pillars on the ground floor, creating seven arcades of unequal width. Above this, there is the 'noble' floor, with its nine window openings and finally the three gables that look over the town square. 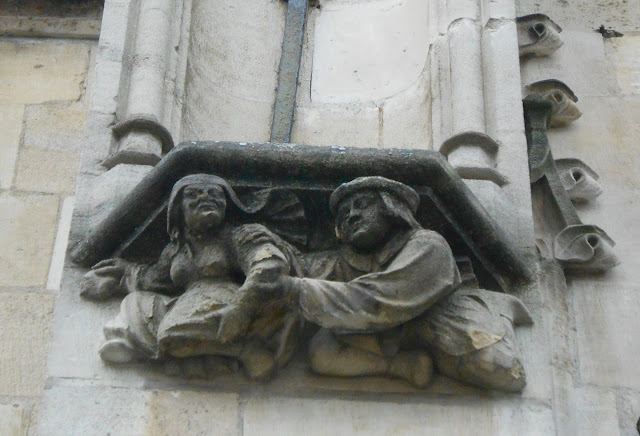 While the overall effect is sober and elegant, on drawing nearer to the façade the visitor is amazed by the wealth of detail, and its very nature. 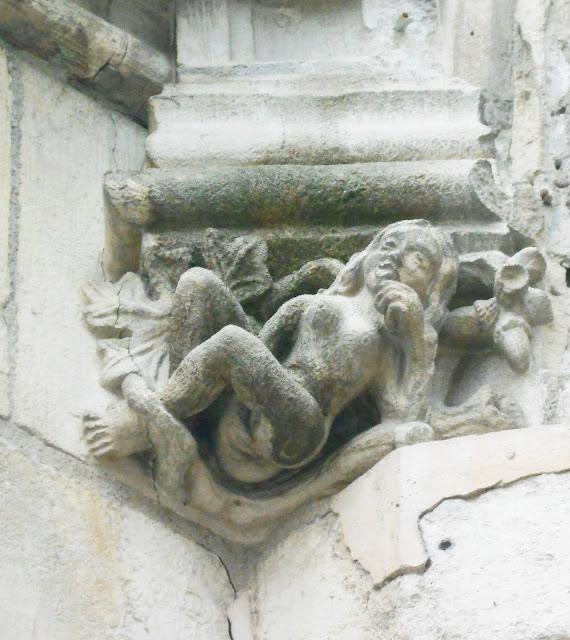 Perhaps the most surprising of all, is the mere fact that the hôtel has managed to survive the turbulent 500 years of its existence. 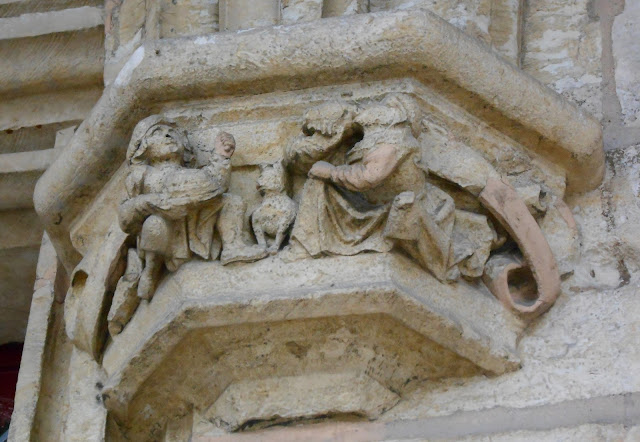 The bell tower that we see above the central gable today, is but one of a succession since the mid-17th century. It houses an impressive thirty-seven bells which mark a triumph over the destructive years of the First World War when the citizens left the occupied town and the bells fell silent. 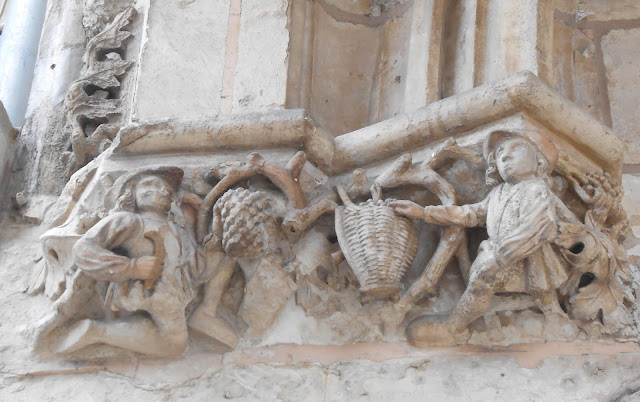 Incredibly, most of the façade today is much as it was in its heyday - quite some feat. The fate of Saint Quentin during the Great War years was like that of other towns. 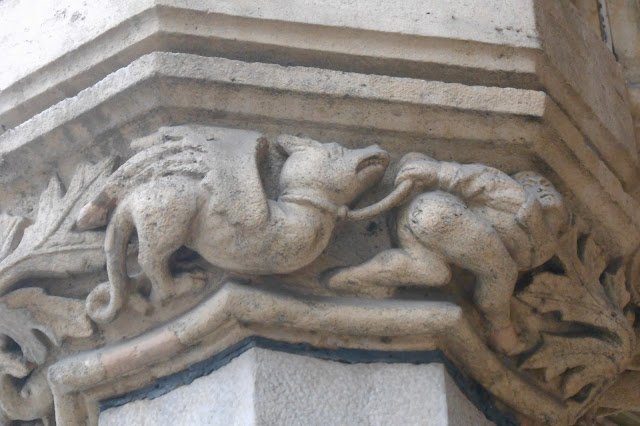 Many of the buildings surrounding the hôtel were flattened, hence the emergence of the Art Déco architecture to mark the rebirth of the city. The townhall itself suffered minimal damage. 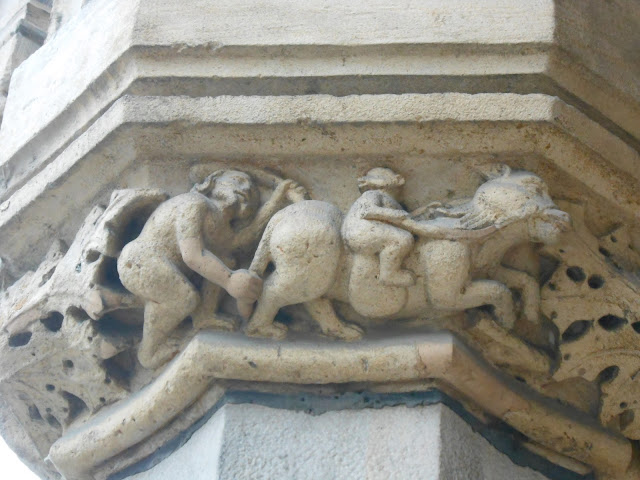 This was not the first time that the saint-quentinais had undergone great hardship. The symbolic imagery of the dog and the monkey that decorates the hôtel testifies to the fidelity, tenacity and ingenuity of the town inhabitants. 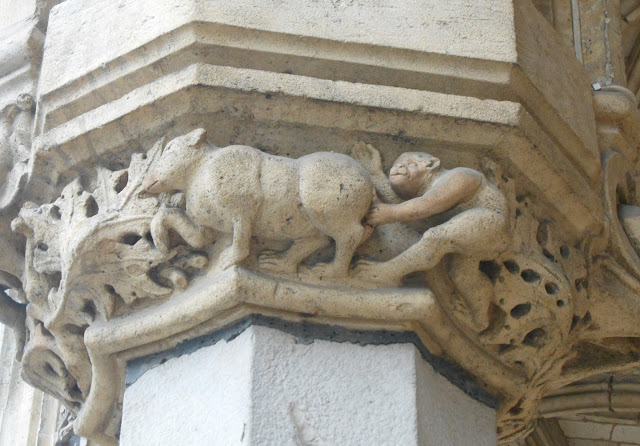 In 1557, the advancing troups of the Spanish king, Philip II, fought to overpower Saint Quentin in their march towards Paris to triumph over Henry II. The people of Saint Quentin resisted valiantly and the ensuing siege meant that the Spanish lost valuable momentum in the battle strategy. 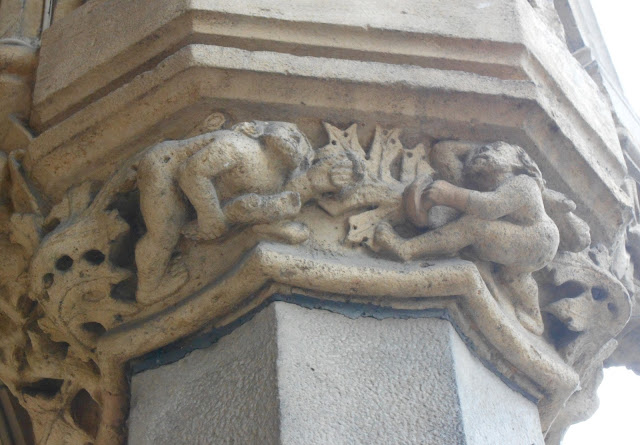 Saint Quentin made huge sacrifices, but in so doing, it saved France from greater losses still. Inside the arcade of the hôtel de ville, a marble plaque bearing a Latin inscription immortalizes the bravery of Saint Quentin. 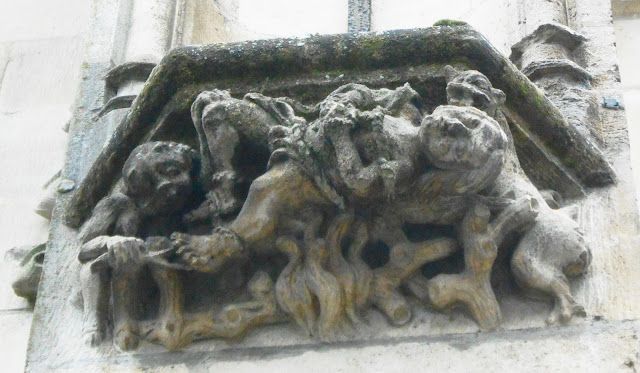 The devastation at Saint Quentin left its mark on Philip II himself and he decided to construct an expiatory monument; the Royal Site of San Lorenzo de El Escorial,near Madrid... 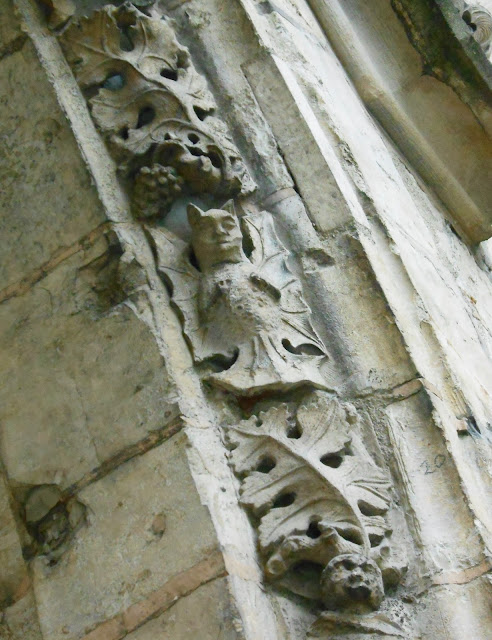 I just loved looking at all the details of the façade - to the point that I literally had pains in my neck from all the contortions. 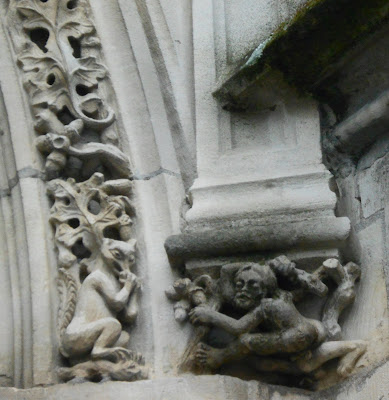 Since the sculpture is not specifically religious, the works have not suffered the same fate as the many that had adorned places of worship, with decapitated and truncated bodies that mark the Revolutionary years from 1789 onwards. 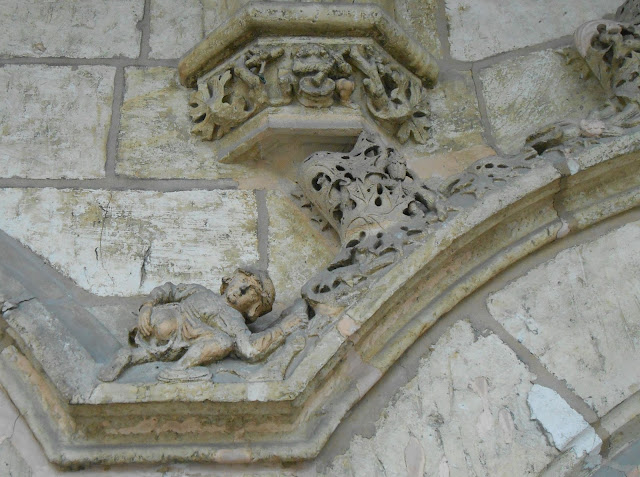 Here, the bawdy tone of some of the sculpted works seems to celebrate the foibles of Man and Beast and bears a general fascination for life, that even encompasses its lewdness and lasciviousness. 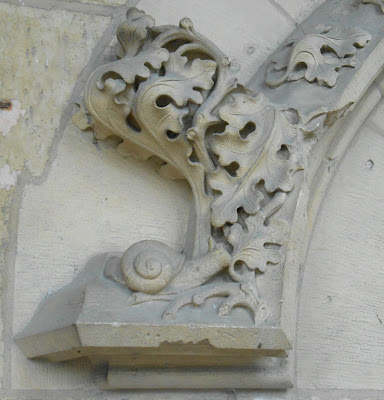 Musicians lean over to welcome you along the arcades, whilst more sober characters carry out their serious civic functions and administrative tasks to maintain order amongst the somewhat mischievious town-dwellers. 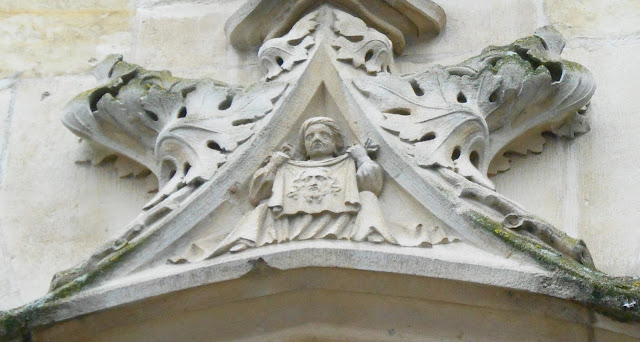 Various creatures inhabit the creeping, crawling foliage around the façade and either look down at you in mocking defiance or seem to ignore you and any restrictions you might wish to lay down. 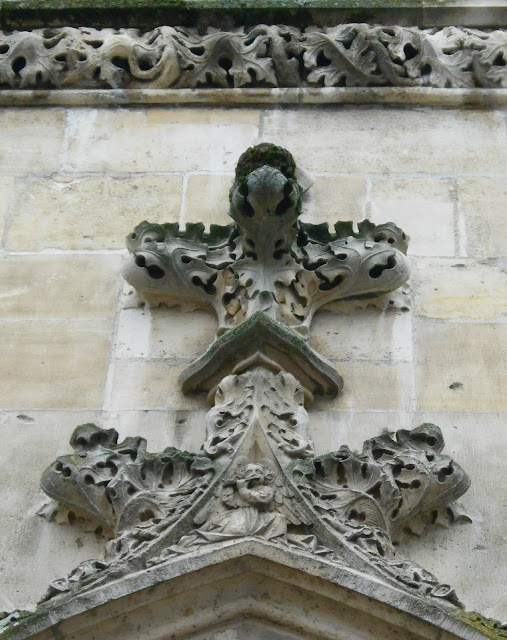 The vitality of the façade just seems to bridge the centuries that separate us today and all those who must have acted as models for the sculptors, acting out all those weakenesses that make us so human... 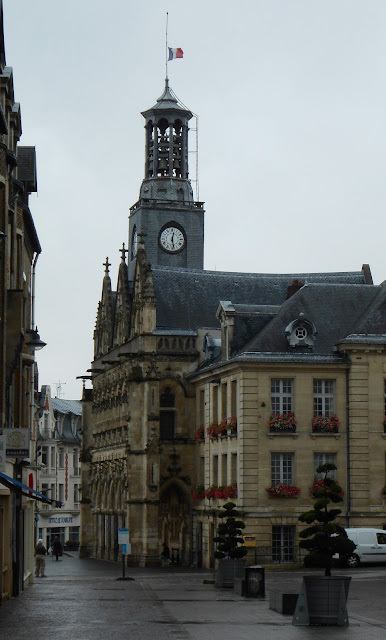