I dedicate this post to my beautiful kinky boots that I bought late this summer, with great delight and without any hesistation whatsoever except over the choice of colour (teal blue or ruby red...Hmm!), despite the cost and any other practical consideration, for that matter. In fact, they were the perfect match for the dress that I bought from the same shop almost a year before, with the same impulsivity and no misgivings except one - that now concerns both dress and boots... I can't wear them!

The one and only time that I wore the dress early this summer, it (well, me wearing it, to be more precise) met with such a resounding wall of silence that I felt quite shocked! I don't wear clothes, jewellery or accessories 'for' anyone in particular except myself, but to have such a bright dress tactfully ignored was weirdly unnerving! I didn't want to let that deter me from wearing the whole ensemble - dress and boots - but it did and has still and so now my boots have become an alternative form of interior decoration. They have pride of place where they can be seen and admired by myself every day, whilst the dress is draped over a piece of furniture with the same aim!


At least they are also a great excuse to listen to the cult song - Kinky Boots - starring Patrick Macnee and Honor Blackman from The Avengers. This was released in 1964, the year that I was born - maybe that provides an explanation for the deafening silence inspired by my dress and I... Mutton glaringly dressed as lamb! Well, that won't stop me liking the dress or the boots, my lovely kinky boots!

And I'm going to listen to the song again and again... 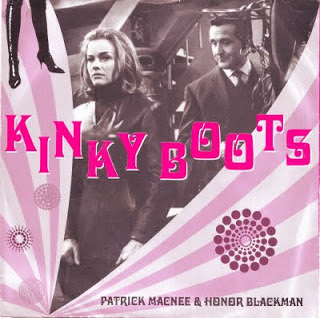