This year saw us spending the dusky part of Christmas Eve visiting the Grands Boulevards of Paris to look at the prestigious window displays of the famous grands magasins. These displays were all elaborated to highlight the magnificence of these shops and the world-famous French luxury brands they sell... 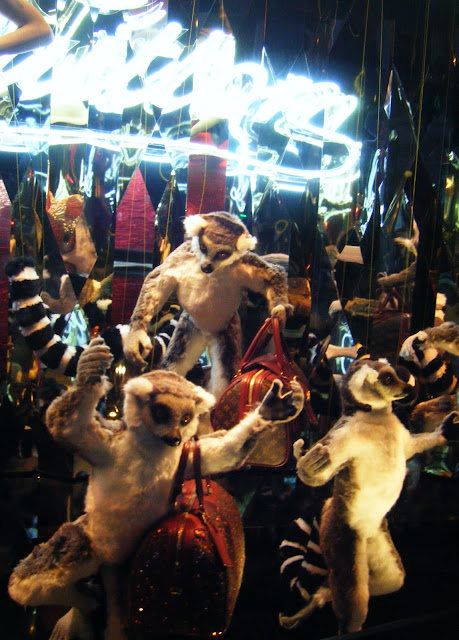 Well, I'm not really a fan of big names, labels and their corresponding price tags, but in magpie style my beady, greedy eyes are drawn to anything shiny and sparkly... and if it should feature animals, all the better! 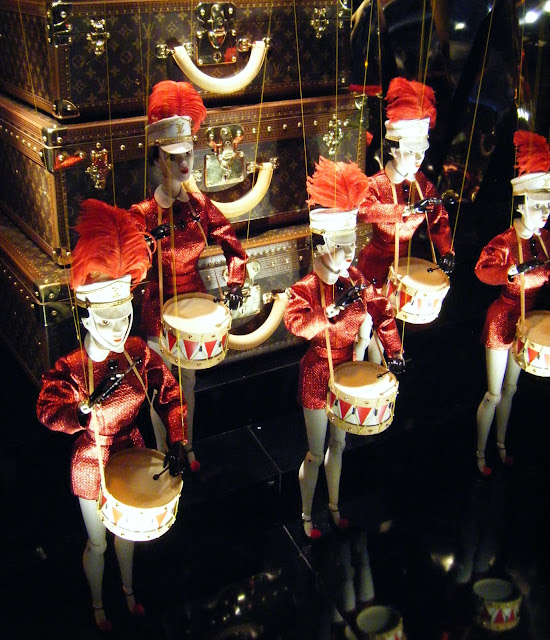 So this really was the Noël du Siècle, as the adverting slogan for Galeries Lafayette stated. 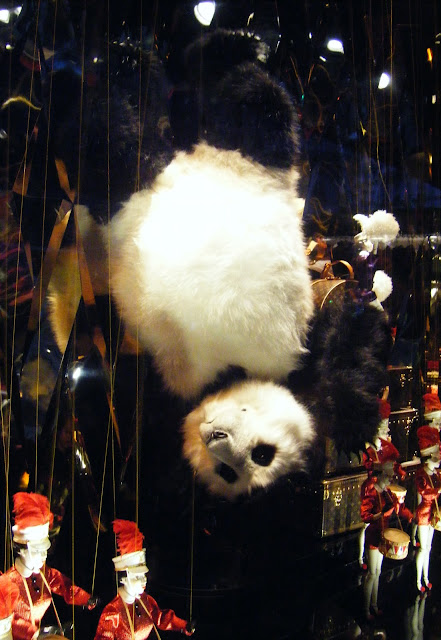 While the Bal du siècle was being played out by a menagerie in the windows overlooking Boulevard Haussmann,  the Au Printemps department store next door saw mannequins, sashaying and strutting around in sequined attire. 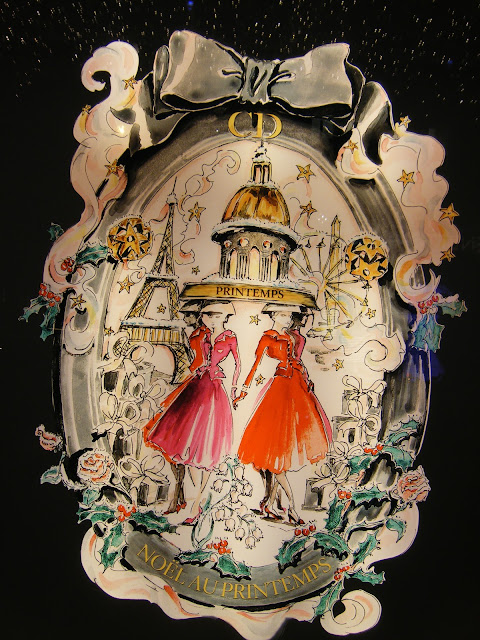 It should have come as no great surprise to find that the window displays, pavements and streets surrounding these grands magasins had drawn in huge crowds, despite my theory that everyone else would be preoccupied preparing themselves and the Réveillon meal. 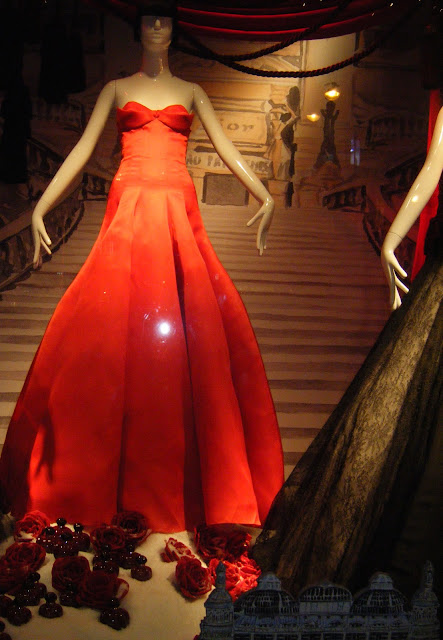 This just proved that the grandes vitrines perform their duty just as efficently as their creators had intended in the 19th century; to make dreams accessible to the general public and to give them inspiration... to buy. 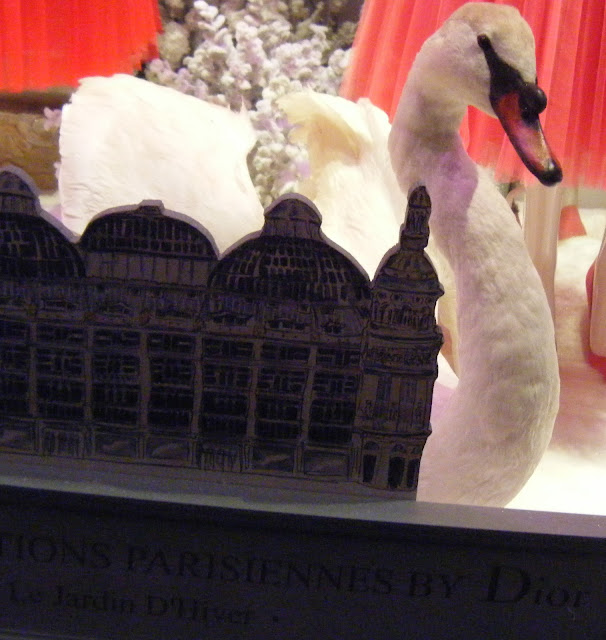 With the names of Dior, Chanel and Louis Vuitton emblazoned on the window displays, the inspiration of le luxe français is certainly operating its magic on a global scale, with the greatest sales coming from the Asian clientèle.

Despite their great renown, Galeries Lafayette and Au Printemps were not the first grands magasins in Paris, nor were they the first to inaugurate the institution of the grandes vitrines.

Some forty years before their arrival, there was Au Bon Marché, near Rue du Bac. This department store had a radical effect on the concept of shopping, fashion and flâneries, and consequently on the consumer habits and material aspirations of Parisian middle-class society.
Such was the social impact of Au Bon Marché as the "Cathedral of modern commerce" that Emile Zola used it as the basis of his novel Au Bonheur des Dames. To accommodate the large visiting clientèle during their shopping sprees, the Hôtel Lutetia was built nearby...
Although Au Bon Marché introduced an innovative form of commerce, not least with the structure of the building itself, with architectural contributions from Gustave Eiffel, it was with the later grands magasins that shopping took on a whole new meaning and opened out to an even larger public.
In the 19th century, just as hoards of provincials flooded into the capital to arrive at Gare Saint-Lazare, near the grands magasins, others went much further afield... 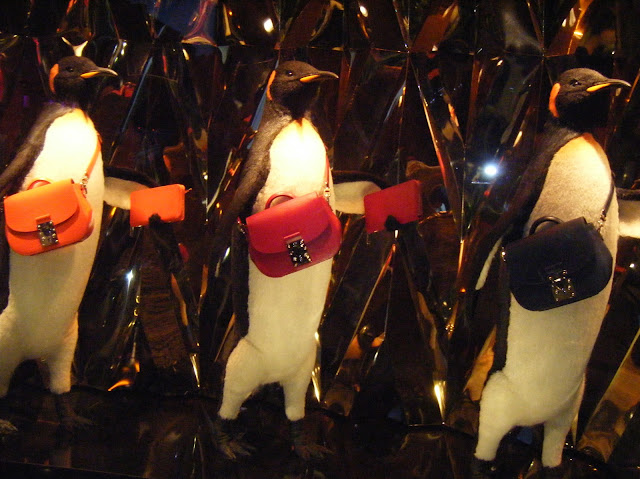 The company Louis Vuitton, founded in 1854, was to build its name on the need for solid, stylish luggage to withstand such travel requirements. 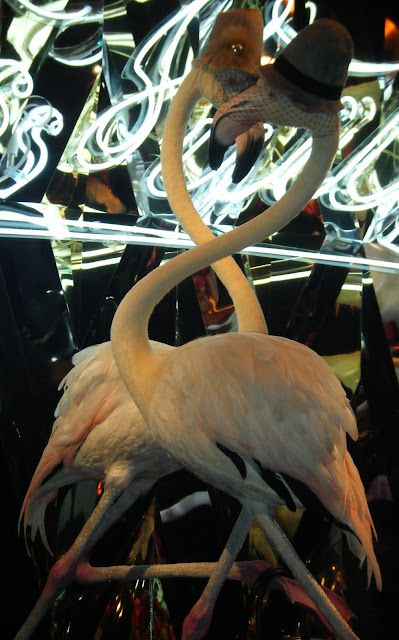 This year's window display at Galeries Lafayette is devoted to LV, which in turn pays hommage to the grand magasin itself through its aesthetic references to the store.

The displays all present vintage and modern LV luggage and accessories, featuring the respective animal stars from the four corners of the world, yet all are set against a backdrop mirroring the luminous facets of Galeries Lafayette's famous glass dome, which celebrates its centenary this year. 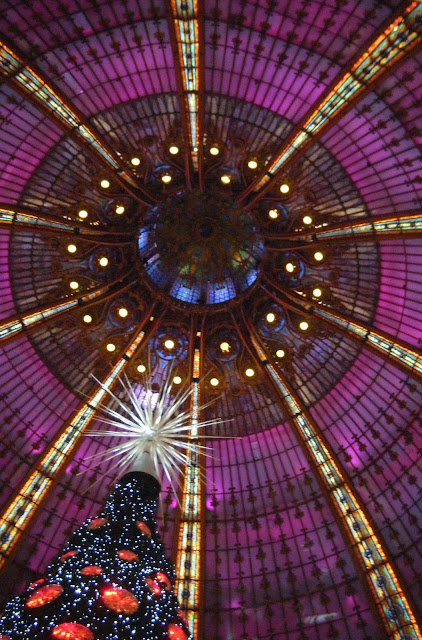 Of Byzantine style, this magnificent stained-glass coupole dominates the store inside and out. At 33 metres in height, the structure is breath-taking today, but must have been even more so when first constructed at the beginning of the last century.

For the centenary the coloured geometric forms of the Art Nouveau design were shown in all their glory by the changing lights that transform the colour schemes in a magical show. This was further enhanced by an enormous Swarovski Christmas tree of 22 metres! 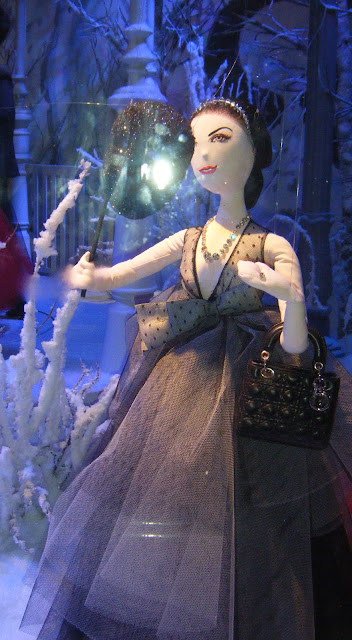 Unfortunately, from ground level in the store, the conditions were more like those on a rugby pitch - everyone was elbowing their way forward to take photos...

It was even worse outside - a veritable scrum - though you'd never imagine it from the photos... All the animals looked cool and collected! Not a ruffled feather in sight! 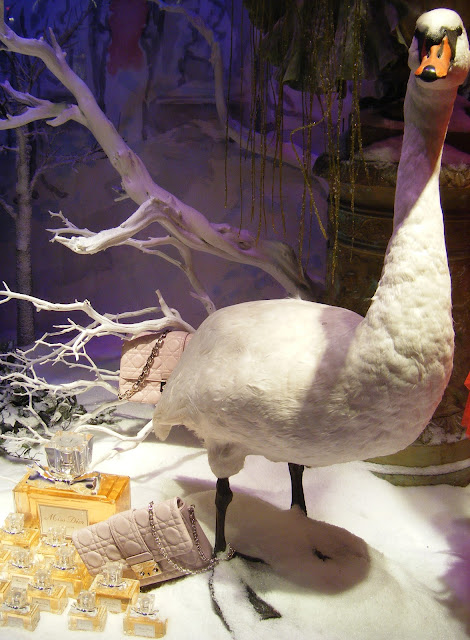 As much as she likes glitter and dazzle my daughter was not impressed by the experience at all! I assured her that she'd regret if she did not 'do' the Parisian windows! 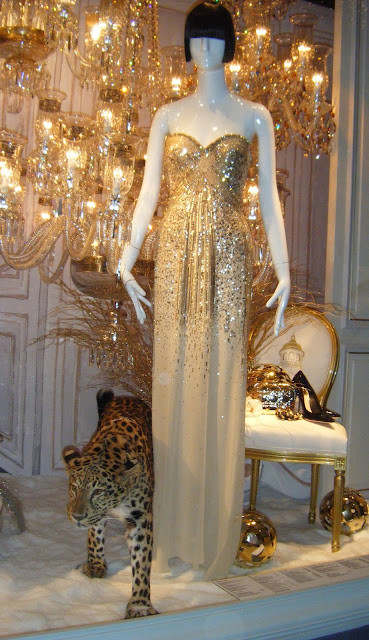 The search for calm and a certain sophisticated order were what drove the grand urban planner of 19th century Paris, Baron Haussmann, whose name was given to the grand boulevard that houses Galeries Lafayette and Au Printemps near the Opéra Garnier. 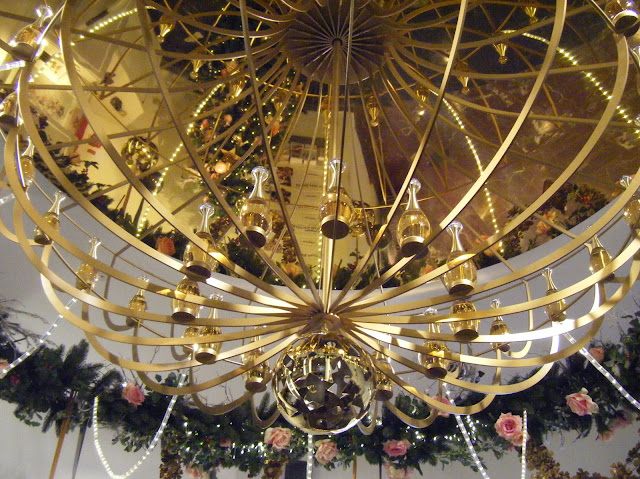 Haussmann was responsible for the huge transformation of the capital, largely obliterating 60% of the narrow, sprawling streets and alleys dating from Medieval times in order to create a city centred around a series of great axis. The most famous of these arteries must be the Champs-Elysées which radiates from the Place de l'Etoile.

While today certain aspects of Paris may appear to be the height of luxury and chic, this wasn't always the case... Inspired by the urbanism and hygiene of London, Haussmann wished to surpass this in his native Paris under Napoleon III, during the Second Empire. 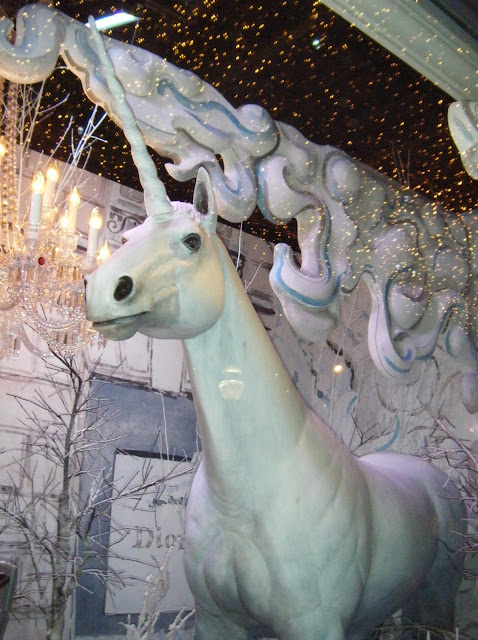 His objective was to create a Paris that would be "beautified, sanitized and greatly increased in size" and he was most determined (ruthless even) in his will to accomplish this. Whilst many people praised his endeavours, others condemned his 'Haussmannization' as the destruction of the social heart of Paris. 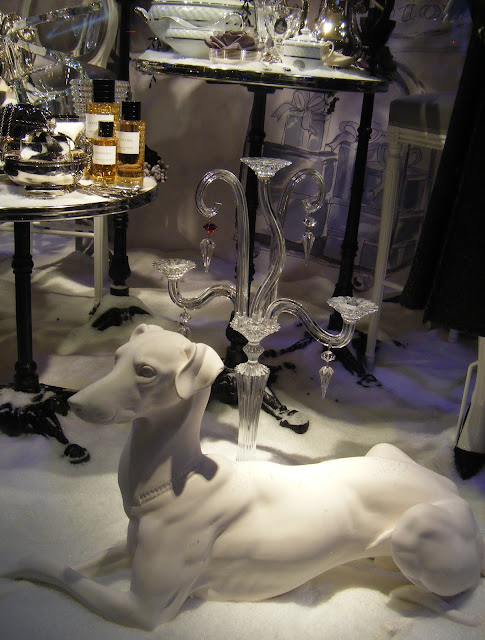 Criticized for his obsession with straight lines and a strict application of norms for height and style of the typical Haussmannian architecture, he nevertheless created the Paris of vast tree-lined avenues and grands hôtels particuliers that we know today. 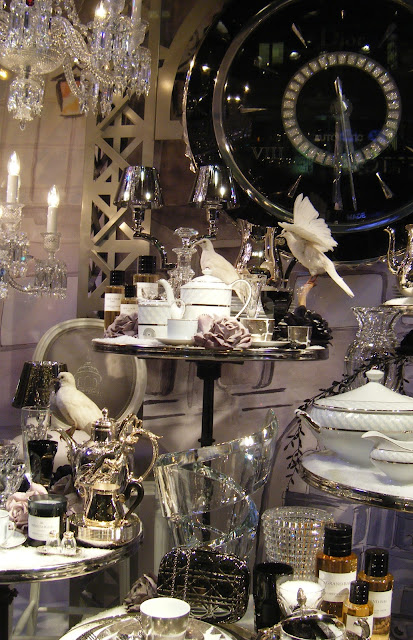 Haussmann sought to encourage ever-greater economic growth for the capital. He did so by rendering the circulation of traffic and pedestrians more fluid through a network of clear-cut routes - be that actual roads or pavements that facilitated the bourgeois flâneries.

In so doing, he also hoped to crush any possible manifestation of political uprising in the civilians as large avenues would allow access to cavalry and direct canon fire.
Well, I thought the grands boulevards were an absolute riot on Christmas Eve! Mind you, this was just preparation for the following day with the Main Street at Disney!