The Festival of Joan of Arc in Reims - Les Fêtes Johanniques de Reims...


The annual Festival of Joan of Arc - les Fêtes Johanniques - takes place in Reims in mid-June, in order to commemorate the triumphant arrival in the city of the 'Virgin of Orléans' and Charles VII in 1429 and the latter's subsequent coronation as rightful King of France...


For the space of a weekend, Reims, the bourgeois heart of the Champagne-producing region is taken over by a Medieval encampment.


A bawdy Middle-Age crowd invades the streets with their animations, stands and shows.


The key moment of the event is however, the final procession of Joan and her King from the Basilique Saint Remi to the Cathedral of Notre Dame.
This is traditionally followed by an incredible motley crew of royalty, ruffians, beasts and beggars, exotic animals and animation of all kinds.
The city centre is freed of modern traffic, but the pavements and streets are suddenly occupied by stranger forms of transport and pedestrians...

This year promised to be even more spectacular as it commemorated the 600th year of the birth of Joan of Arc, and, as always, similar celebrations took place in Orléans and Rouen.


The timing of the festivities posed a small problem this year, however, as not only was the Sunday ceremonial procession threatened by the looming rain clouds, but we also had another regal procession to watch; Queen Elizabeth's River Pageant....

Although my loyalty was tested, the choice was made quickly! Sorry Joan…

We ended up watching the washed-out London celebrations on television, instead of those taking place here. In terms of weather, the Grand Cortège des Sacres didn’t seem to fare any better as it poured with rain and seems to have done little else since.
Now when I look at the photos of the Fête de Jeanne d’Arc the sunny weather of that Saturday afternoon seems to be a very dim and distant memory.
The relaxing summer days I had been hoping for didn’t materialize either so today being the 17th July, the date of Charles’ VII coronation, I hope to finish this post once and for all, with or without the sun!
Last year the town commemorated the 800 years of Reims cathedral and over the months we have seen beautiful evening Sight and Sound displays – Rêve de Couleurs –as lights illuminate and play over the façade of this famous Gothic edifice in the same vivid colours as the stained glass windows themselves.
For centuries the cathedral played the same role in the Sacre, the coronation of French kings and queens, as Westminster Abbey in England.
The huge spiritual and sovereign importance of the cathedral and the adjoining Palais du Tau was recognized in the grandeur of the edifices and also the regalia with which the monarchs were presented during the ceremonial rituals of the consecration. The anointing, or unction, of the monarch in Reims, refers back to the baptism of King Clovis in the city in 496-499. From the year 816 the ceremony of Le Sacre took place principally in Reims and it was the Holy Ampulla, containing the balm to be mixed with ‘chrism’ and allegedly transported by the dove of the Holy Spirit, that conferred the divine right to power on the French monarchy.
The numerous maraudings, meanderings, twisted intrigues and open hostilities between France and England that had started with the William the Conqueror’s victory in 1066 continued to grow in frequency and force to give rise to the Hundred Years’ War. These hostilities were further complicated by the civil wars between the Armagnacs and the Burgundians that ravaged the French realm from 1407-1435. The Burgundian factions sought alliance and protected their interests with the English, whilst the Armagnacs sided with the French. England, ever-avid to see an English king reign over France, exploited the animosity between the two factions to their own profit.
The end of the Anglo-French war was the backcloth to the Dauphin’s rightful accession to the French throne in the first part of the 15th century when Joan of Arc finally led Charles VII to Reims. However, this passage was far from smooth… The crushing defeat of the French at the Battle of Azincourt (1415) by Henry V had led to the marriage between this English king and Catherine of Valois, the daughter of the French King, Charles VI. In addition, the Treaty of Troyes (1420) recognized Henry V as regent of France and decreed that his successors would occupy the French throne. Charles V disinherited his own son, the Dauphin Charles VII, to the succession.
When Henry V died before Charles VI in 1422, Henry VI of England was acknowledged future king of France by the English and the Burgundians. He was to be crowned in Paris 1431, aged just 10. On his father’s death in 1422, the Dauphin, Charles VII, wished to claim this title for himself but being unable to overthrow the English, he left Paris for an area near the Loire Valley and was disparagingly referred to as the ‘King of Bourges’ (the small town he inhabited). The sudden arrival of the young peasant girl from North-East France, Joan of Arc, would put an end to this stalemate.
In 1429, Joan freed the besieged city of Orléans from the clutches of the English forces and declared that she had a divine mission to take the Dauphin from Chinon, to Reims for his consecration. “Tu es vray héritier du trône de France”. Herself guided by angels’ voices, Joan succeeded in leading Charles Le Victorieux to the ville des Sacres, where he received the keys to the city, and Dauphin was duly crowned king on the 17th of July of that year. 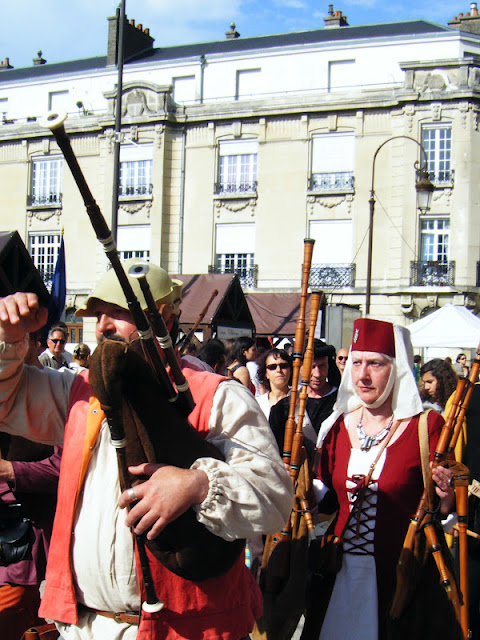 Joan was later captured by the Burgundians near Compiègne and was sold to the English so that they could do as they wished with this ‘heretic’. Her fate was sealed and she died at the stake in Rouen in 1431, aged only 19, yet was to become a folk heroine and a Catholic saint, and the Fête Jeanne d’Arc reflects the continued interest in this cult figure of French history.
Over the centuries the symbolic image of Joan of Arc has given rise to numerous works of art and most French towns have large statues, sculptures and paintings in her honour. One the works that I have seen, I prefer that of the Place des Pyramides, near the Louvre, in Paris.
Commissioned by the government on France’s defeat in the Franco-Prussian war in 1870, the statue reigns over the traffic today, but initially commemorated Joan’s brave attempt to take Paris. I always think of this work as typically Parisian but in fact other versions of Frémiet’s statue can be seen in Nancy (France), Philadelphia, Portland and Melbourne – the latter being the less resplendent simply because it isn’t golden! 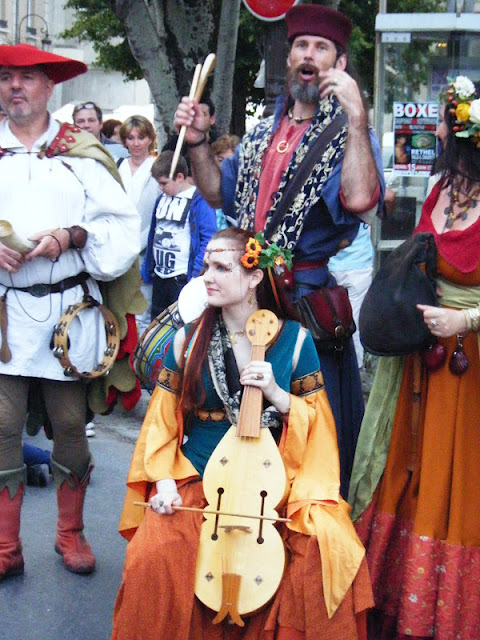 Of course, Reims has its own statue of Joan of Arc, situated just in front of the cathedral, but whilst she brandishes her sword bravely, her face does not seem to reflect the same bravura and determination as Frémiet’s Jeanne. Not only that, but her sword has fallen victim to acts of vandalism on several occasions, this year included…

Well the sun has finally come out, and I hope it will do so next year when I fully intend to see the Grand Cortège des Sacres on the Sunday, camera in hand, surrounded by all kinds of Medieval and modern-day magic.
It’s not everyday that you can see vultures, eagles and owls flying around the square in front of your local baker’s shop! Or be overtaken by a procession of camels and yaks on your way home after a busy day of festivities!

And no one could possibly forget the haughty expression of those camels!
Posted by Beach-Combing Magpie at Tuesday, July 17, 2012