Seraphine of Senlis at the Maillol...


Several years ago, in 2008, there was an exhibition at the Musée Maillol Paris of the Primitive art works of Seraphine of Senlis. This coincided with the 2008  film Seraphine which traced her discovery as an artist by art collector, Wilhelm Uhde. 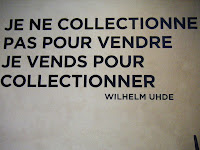 I missed both of these at the time, although I have since seen the film and went to see the collection of Seraphine's paintings at the Maillol this weekend.

I covered much of what I have understood of her life and art in my post Seraphine of Senlis. This time I just wanted to get a closer look at the paintings exhibited in order to see the brushstrokes and details of her work.
Most of the work on display is from the period 1920-1930, a time just after the First World War during which Seraphine had not yet been re-united with Uhde.

These apples actually do look more like ripe tomatoes, especially with the crackled effect that perhaps came as a result of ageing due to the composition of the paint materials used. Seraphine used her own 'secret' ingredients to create concoctions that are still not fully understood today.

The richness and density of paint application in some parts is contrasted by that in other areas where the canvas is visible below a thin layer of colour. 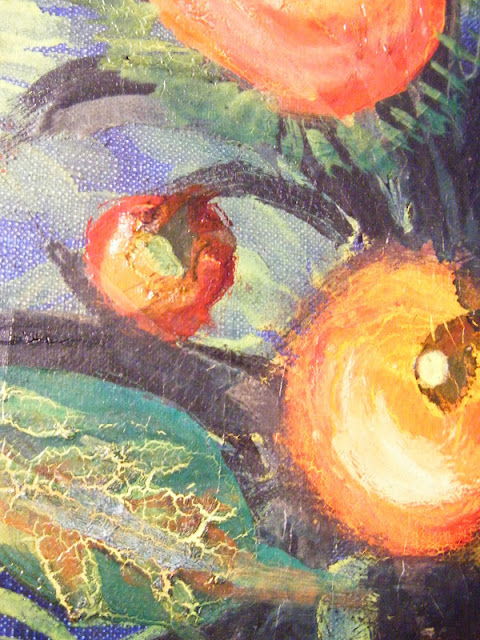 The vivid colours are set in contrast with pitch black, in turn offset by bright white paint strokes. 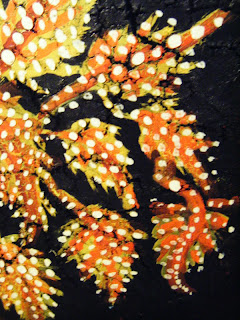 Many of the flower paintings (flowers and plants made up the vast majority of her work) seem to burst from a base in the lower part of her art work. This pattern seems to repeat itself even when trees, bushes and other hybrid plants are portrayed. A whirling mass of foliage rises upwards from a darker zone on the canvas, leading our eyes up towards the bright colours at the top of each work. These two areas are often delineated by a horizontal band that divides the painting. 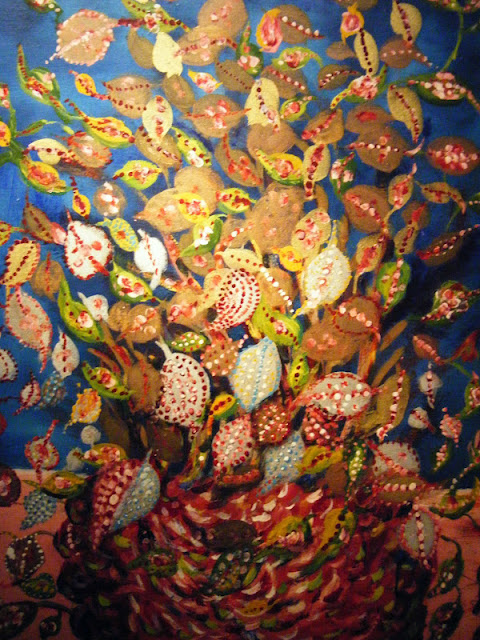 Here a flurry of leaves lead up to a bright blue 'sky', and while the main tone of the mass of foliage appears in tones of autumnal brown, in detail each leaf bears jewel-like marks. 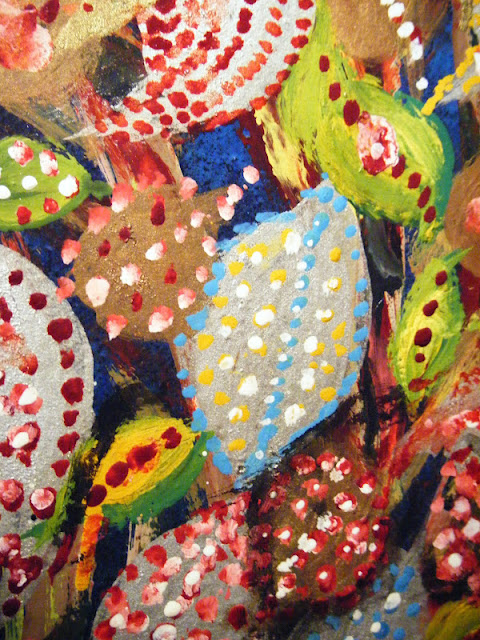 Other paintings seem to be wholly based on this bejewelled aspect.

With their intricate beading and dashes these remind me of Aboriginal art... 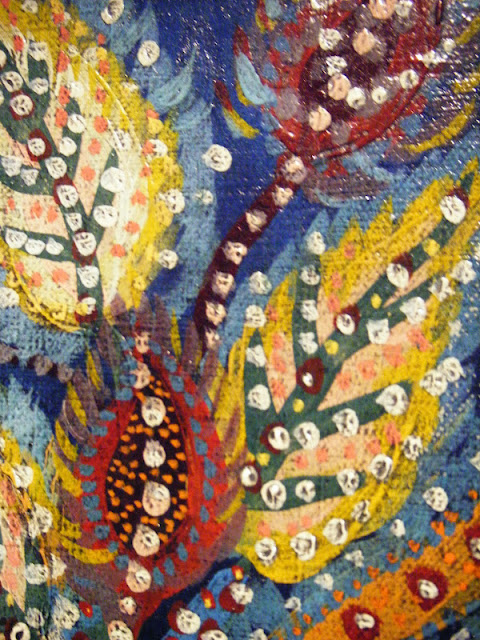 Even the paintings which seem to be more traditional in their floral composition have exotic leaves and foliage that bear little resemblance with reality.

These daisy-like flowers dazzle on the canvas. 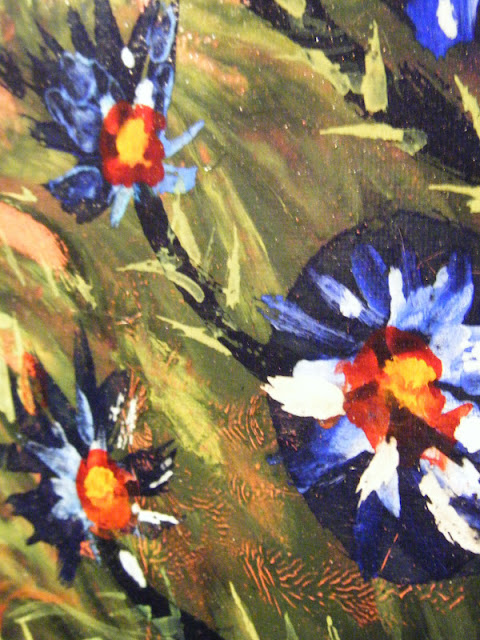 Other flowers look feathery and billow across the canvas....leading me to wonder which way the painting should be hanging!

I prefer the wilder flowers in the later works because of their exuberance and force. Here strange forms are emphasized by tendrils that seem to furrow out from amongst the leaves and crawl like caterpillars. 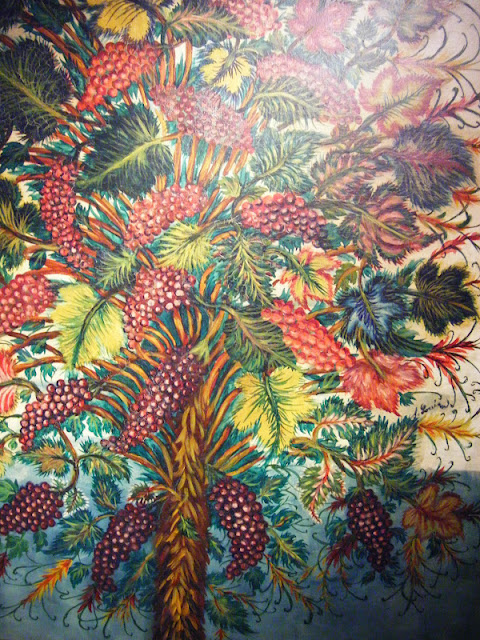 The grapes here sprout out from bizarre vines. Thick leaves, like those of cabbage plants break out from a structure that looks like a palm trunk. 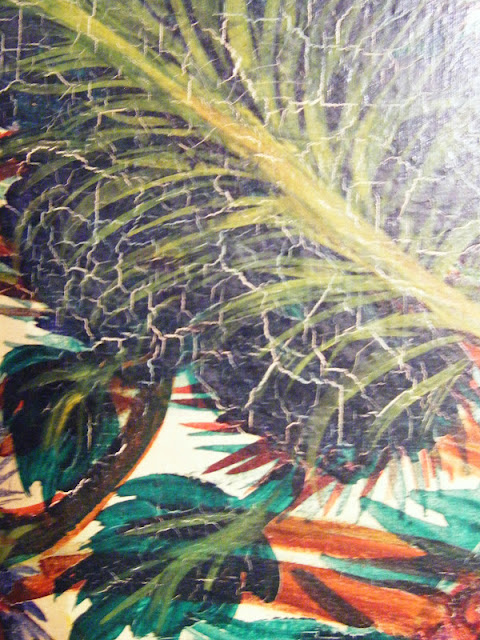 The paint composition seems to be less dense on this painting so that we can see the overlapping effect as leaves and stems cover each other. 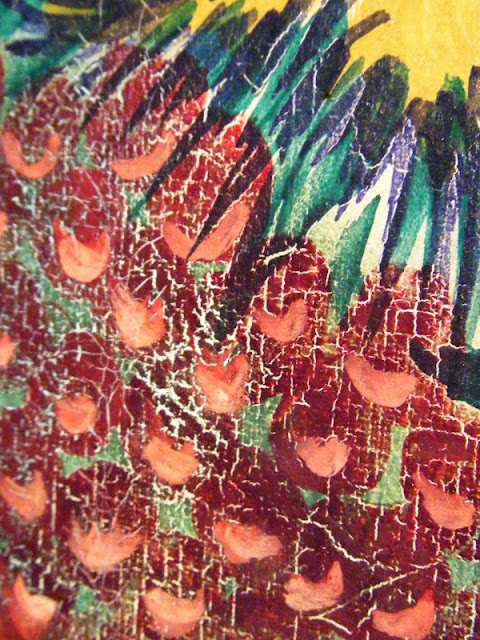 The tendrils at the end of branches and buds add extra vitality to this painting. 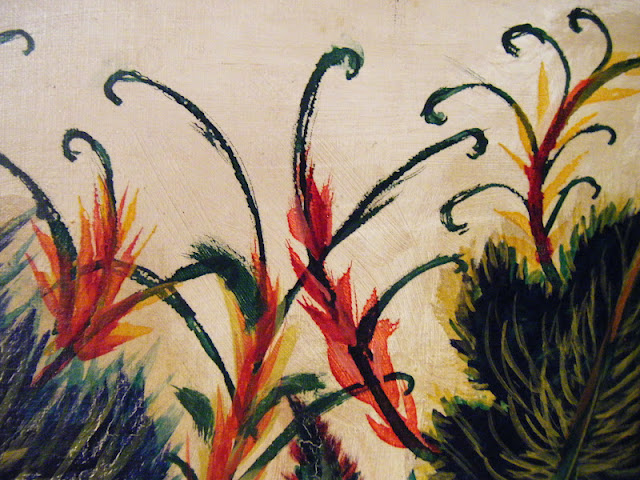 The following painting, with its bright, irridescent colours and density looks like a stained-glass window. The blue set off against the orange creates such a vivid effect which the white buds seem to accentuate even further.
The tiny touches of yellow and blue sparkle from these flowers, whilst the differing angles of the flowers give the painting a strange movement or animation. 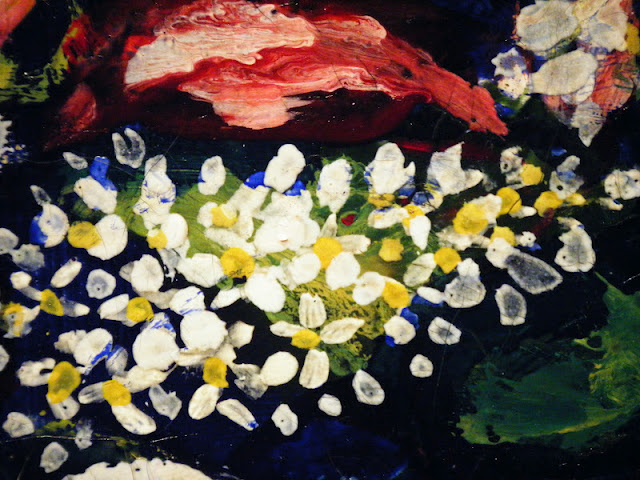 As ever, on the right-hand side of her works is Seraphine's signature - S. Louis -that of the artist who rightly described herself as "Sans rivale". 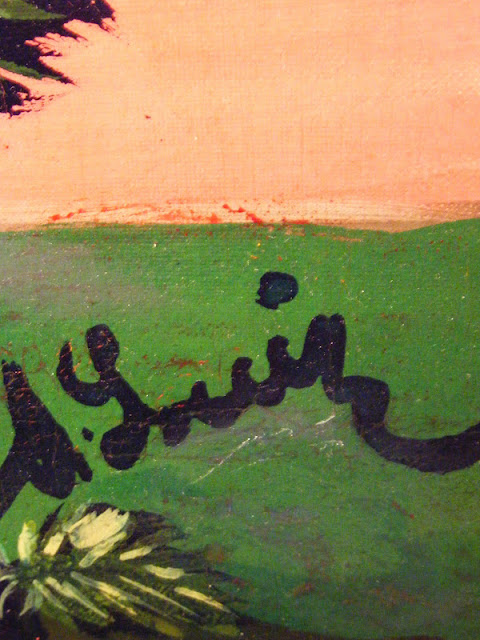 All these paintings are at the Musée Maillol in Paris, waiting to be seen in the flesh which has to better than looking at the photos.

My favourite Seraphine work is however at the museum at Senlis - The Tree of Life. 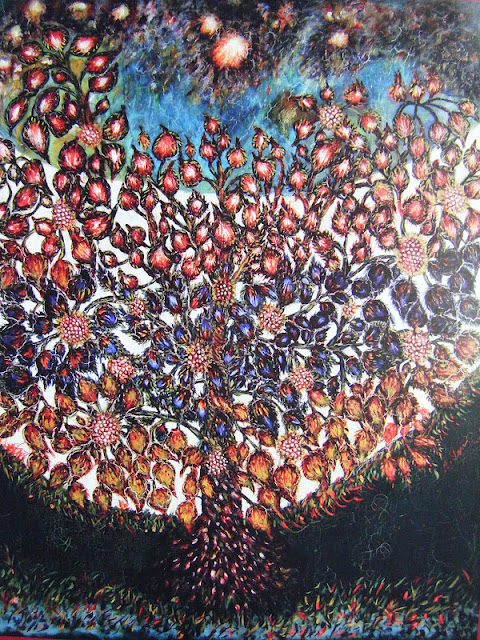 Posted by Beach-Combing Magpie at Wednesday, May 23, 2012