Peacock iridescence to be proud of...


With its apparently simple form given an incredible depth and complexity through its iridescent colours, little can equal the peacock feather. I can't think of anything, apart from butterfly wings for the same reasons surely, that fascinate as much as these majestic miracles of nature. The ever-changing colours add varying dimensions that seem to alter the flat plane, and provide convex and concave impressions to the surface of each peacock 'eye'.

These same eyes that have mesmerized man over the centuries have given arise to innumerable myths and have been taken as the symbol for many differing elements in spiritual, physical and social dimensions thus creating another impression of shifting and shimmering.
In Greco-Roman mythology the peacock was created after Hera/Juno tried to curtail the strutting infidelities of her husband Zeus/Jupiter. The rightfully-jealous wife set the hundred-eyed Argus to guard over her husband's intended lover, Io, who had been (unsuccessfully) disguised as a heffer. Despite his watchful gaze over his charge Io, the all-seeing Argus Panoptes was lulled to sleep by Hermes/Mercury on Zeus' command and was then beheaded. 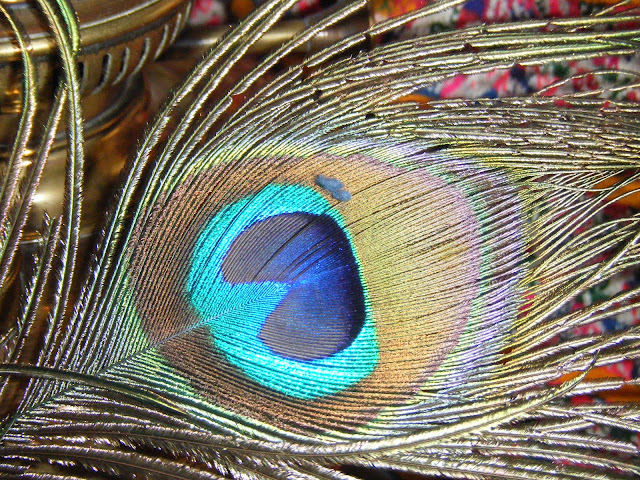 On seeing this, the distraught Hera took the hundred eyes of the guard and placed them on the train of her favourite bird, the peacock. In Christianity this bird symbolized a church that is all-seeing, offering redemption and sanctity and peacocks often appeared among the stable animals in scenes of the Nativity. In certain Mediterranean countries meanwhile the peacock represented the Evil Eye and as such was most inauspicious...

Feathers of colours that seem to quiver and taunt us seem to be very far-removed from those of other members of this bird group - the Galliformes - which also includes pheasants and turkeys. While they have a more modest plumage, turkeys too perform fan-tail quivering gestures and rituals not so unlike the displays of the peafowl, and both varieties of bird look a little less majestic when observed from behind!
However the iridescence of the peacock is unique - even the more sophisicated pheasant feathers seem rather dull in comparison. As light encounters the nano-structure of the feather barbules the effect is dazzling and misleading - creating an optical illusion of simultaneous distance and vicinity. Beyond the Classical mythological associations it must have been this fluidity, evasiveness and brilliance that attracted many artitsts to portray the peacock.

The majestic fan is thus used in courtship displays to attract females to the holder of the most resplendent, dense array of feathers. It would seem rather strange that this cumbersome train could meet the criteria for the suitability of a male and mate, yet the peacock is not the only bird to perform elaborate courtship displays and to bear the equipment to do so with. Although the peacock is one of the exceptions in the Galliforme family since it can fly, its flight is a little limited yet enables it to roost in the tree tops at night to avoid falling prey to predators. While the peahen does not offer the same wealth of plumage, the feathers have their own subtle beauty and enable the female to remain under camouflage when she broods and raises her young in the undergrowth on the ground. The calls of male and female are both very distinctive yet different from each other - the peacock offering a cat-like cry, while the hen responds with a barking type. The reproduction period coincides with the rain season in Asian countries, when the heart-stopping calls sound out day and night, yet the peacock is said to become restless before any rainfall. It is little surprise then that peafowl make an excellent guard, ready to denounce any intruder and that they initially adorned the gardens and grounds of temples, palaces and opulent homes in India and South-east Asia. In distant Babylon the peacock was a sign of royalty whilst the Kingdom of Persia was refered to as the Peacock Throne. Nevertheless, over the centuries the peacock has been somewhat democratised and can now be found ambling around garden centres and farms, maybe a little crest-fallen, but just as beautiful.

As my fingers and eyes burn every time I see a peacock feather, I have always gathered ones of different shapes and dimensions, trying not to be deterred in my hoarding mission by feather allergies and then the dreaded 'Woolly bear' larvae of the carpet beetle that literally reduces my feather treasures to shreds, filaments and dust! Above is a collection of tiny feathers from the neck of a bird (they had been discarded during a moult - I didn't throttle the poor creature, honestly!) and some from the lower-back region. In fact the peacock moults at the end of each summer, thus growing back a full plumage and doesn't attain an adult size and maturity until after three years of age. This very real yearly moult accompanied by the rather dubious legend that peacock flesh was pure and could not decay led to the peacock being taken as a symbol of ressurection and incorruptibility of the soul. Indeed, two peacocks drinking from a chalice are often used to represent rebirth and purity. It is said that the oath 'By the Peacock' was used to conjure the power of ressurection, like the powers of the phoenix. Peacock blood  was considered to have the power to remove evil spirits and to neutralize serpent's venom, transforming it into 'solar iridescence' to illuminate his fan tail. The feathers themselves were associated with the experiments of alchemists as they strove to turn base metal into resplendent gold.

Even though the peacock is often used as a symbol of fidelity and is said to be bereft when it loses a mate, polygamy is the rule of the roost, with the strutting male preferring to have several obliging females under his wing. Doted with such great beauty it would perhaps be  expecting too much to imagine the peacock faithful too! Incidentally, the Latin name Pavo Cristatus is the origin of the French verb - se pavaner - meaning to strut around in a showy manner. La Pavane was a type of dance in the 16th century, performed in duo, yet with the male occupying a fairly modest role!

In Aesop's fables the pride and vanity of the peacock were to be at the heart of the bird's perpetual dissatisfaction. Envying the plumage and song of other birds, the peacock complained to Juno who finally decked him out in the feathery finery for which he is renowned today. However, seeing an eagle flying high while he was land-bound like a mere quail, the peacock lamented his lot, only to learn that you should not sacrifice your freedom for pomp and show. How sad that the poor peacock has to rely on the gaze of his partners' and rivals' eyes to feel the full measure of his beauty - he can't even see his own worth - but that idea really is getting too anthropomorphic...