Most of the interesting features of the older buildings here seem to be well-above eye level and so a large majority escape our attention. I was waiting for the bus this winter, and looked up to come across this detail in the town centre, adorning the façade of one of the first department stores here - one of the four Docks Rémois, this one built between 1924-1928 by Pol Gosset.

The detail in question is that of the Caduceus - the herald's staff with two intertwined snakes which I initially took to be a variation of the snake-and-rod emblem, symbol of medicine. This duality of association seems to reoccur in much of the symbolism concerning the snake - the most well-known in Christianity, is of course that of the snake in the Tree of Life in the Garden of Eden linked to the pre-lapsian state of innocence and the fall. However, this was certainly not the first split association/split image. Indeed the snake, dual or solitary is seen in many cultures - one of the oldest double-serpent images represents the ancient Sumerian deity Ningizzida.

The winged double-snake Caduceus was the staff carried by Hermes, the messenger god in Greek mythology depicted in the Odyssey. Isis, divine messenger to Hera portrayed in the Iliad, also bore the Caduceus and herself was the symbol of dualism as she linked the gods to humanity, criss-crossing the ends of the world, the depths of the seas and the Underworld. However, it was with the Roman god Mercury that the staff took on further meaning. Bearing the staff in his left hand Mercury acted as guide to a somewhat motley crew - shepherds, gamblers, liars and thieves being just a few examples...

The snake-entwined staff thus symbol of Hermes/Mercury was used to represent many trades, occupations and actitivities associated with the gods and with the notion of commerce in general. It is in this latter capacity that we see the Caduceus on many commercial buildings - here in Reims, the building later became the main office of the local newspaper - again in keeping with the symbol which also represented the art of printing.

A single-snake, wing-less staff is very familiar to us even today, although it has a quite different symbolism to that of the dual snake. Indeed, the two have often been confused as the Caduceus has been used by the U.S  Medical Corps on its insignia. The single-snake form - the rod of Asklepius - is the ancient symbol of the Greek god of that name. Son of Apollo and deified practitioner of medicine, worshipped by Hippocrates himself, his rod was thus associated with all medical issues and healing. The single-serpent figure reflected the duality of medicine with its capacity to both heal or harm, its 'bite' offering both life or death. The very word pharmakon demonstrates this since it could be interpreted in Greek as meaning both healing drug or lethal poison. Asclepius had learnt the secret of preserving life through watching serpents healing each other with medicinal plants, but he was later to be killed by Zeus who did not wish mere mankind to become immortal like the gods. In the Bible, the serpent 's role as healer, bringer or harbinger of death is seen in the Book of Numbers with the image of a serpent wound around a pole, erected  by Moses on God's command to heal ...
"Make thee a fiery serpent and set it on a pole; and it shall come to pass that every one bitten when he looketh at it shall live".
The snake had a vital role in the mythology of Ancient Egypt where serpent imagery and deified snakes abound, reflecting the process of life, death and finally immortality. Wadjet the cobra was the protectress and patron of much of Egypt, its deities and pharoahs. Wadjet's image surmounting the sun disk, uraeus, was the symbol on the crown of rulers. It is thought that this rich Egyptian mythology heavily influenced aspects of the subsequent Minoan culture of Crete which flourished between approximately 3000 - 1100 BC. The most renowned Minoan serpent image today is most certainly the Cretan Snake Priestess statuette (Heraklion Archaeological Museum).

Excavated at Knossos at the turn of the last century by British archaeologist, Arthur Evans, the small faience statue (38 centimetres tall) has led to huge speculation over the years with regard to its identity and exact significance. Since the Cretan alphabet has still to be deciphered there can be no recourse to written scripts to give a clearer understanding of many aspects of Minoan culture - above all, perhaps, the religious rites and beliefs. It is not known if the Snake Priestess statue indeed represents a veritable goddess or a priestess, although as it is a votive offering rather than a cult figure it is more likely to be a priestess. This statue was in fact one of three figures, brandishing snakes, and was surrounded by other religious objects scattered around. As the temple had been greatly damaged during the volcanic eruption of Thera and subsequent earthquakes in approximately 1500BC the reconstructed forms that we know today are based on Evans' speculations and are perhaps not as the originals would have been. 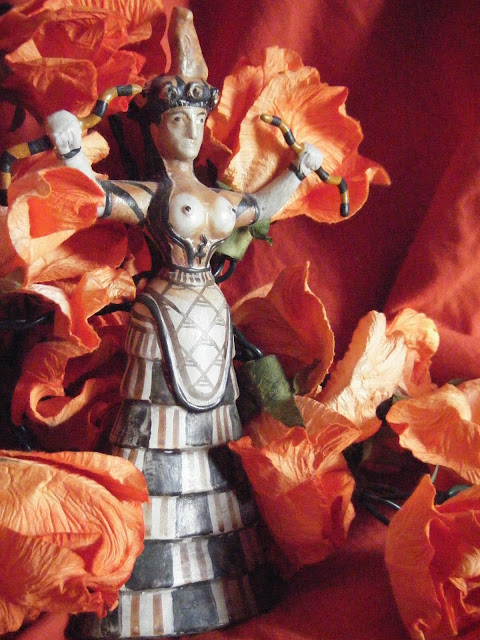 The Snake Priestess herself was found without her headdress and one of her arms, but in the debris certain remains were discovered and by deduction she was reassembled. Even if simply a priestess, the Cretan Snake Priestess is dressed as a deity. Her clothing is decorative and  provocative - the wasp-waisted bodice fully exposes and emphasizes the more-than-ample bust. This is completed by a heavily flounced skirt bearing patterns and sacred symbols and a pelmet focusing on the life-giving forms of the body. It is not sure if the animal form, thought to be a lion cub, that sits on the headdress was originally there, but it is believed to reflect the influence of Egyptian lionness crowns and headdresses. The poppy heads and and pomegranates that border the Cretan headdress are considered to be a reference to fertility and the opiates used in ceremonial practices. Her dark hair hangs long and loose down her back while her expression is transfixed as she stares in front of her, bearing the two snakes in her uplifted arms. It is a striking image - the symmetry of the arms, the geometrical forms of the clothing and the glassy regard leave a vivid impression.
Amid all this calculated guesswork and speculation regarding this particular female there seems little doubt that women in general were of extreme importance in Cretan society, culture and above all, religion. Women dominated the priesthood and in this matriarchal set-up the image of the Earth Goddess, representing fertility and the cycles of life and death was all-important. Like the snake, dual figure of mortality and immortality, rising from the fertile soil, the Earth goddess image seems to link the underworld and Earth.
Women priestresses performed many religious rituals, including sacrifice, often using the Labrys - the double-headed axe. The labrys was the emblem of Royal power and women's importance and its bilateral form referred to the butterfly, itself symbol of the ressurection of the soul. The labyrinth is thought to mean 'place of the labrys', where ceremonial dances and rituals were performed on a unicursal track that induced a comtemplative spiritual state. Like a bee-dance, the labyrinth is believed to have led worshippers to carry out intricate steps and patterns in order to reach an awakened spiritual destination.

Although the vast palace of Knossos was initially thought to have been the site of the original labyrinth of mythology, designed by Daedalus, that theory is now discredited. Born to Mino's wife, Pasiphaë, as punishment for the king's own dishonesty and thirst for power, the half-man, half-bull Minotaur was hidden away in the labyrinth where it lived off human flesh. The cunning Athenian hero, Theseus, aided by his lover Ariadne, finally slaughtered the Minotaur and freed the labyrinth of its resident beast. Even if the labyrinth and its monstrous inhabitant did not actually occupy the palace of Knossos,  the importance of the bull in Minoan culture appears undeniable.

Emblem of the sun and symbol of Zeus, the bull is depicted in many of the artifacts that have survived. The bull would be worshipped, revered, used in bull-dancing and bull-leaping demonstrations and finally sacrificed - with the women and more specifically priestesses, of course, playing a vital role in these ceremonies...


Finally, no duality here, but simply one of the labyrinth drawings by my son who creates fantastic forms and yet receives very little encouragement with his artistic endeavours.

Please, any ideas how he could get his work recognized? He was only 13 years old when he drew this piece - so he's got huge (untapped) talent... Any suggestions?