Yesterday was my grandmother's birthday. Sadly she died almost 30 years ago, but we grandchildren still talk about her with great fondness and with much laughter because she was just such a character!

She had a wicked sense of humour that was not even vaguely politically correct, a penchant for cigarettes, the odd glass of Teacher's whisky and slice of Battenburg cake! Although she did not really enjoy a robust state of health that never seemed to stop her being great company for us children - even in our teenage years. Watching Top of the Pops with her was great as she'd give a running commentary on all the latest styles - the early 80's being the New Romantic period meant that she had a field day towards the end of her life!

When we moved away from the Midlands to Cornwall at the end of the 60's the highlight of the year would be seeing her again, either in Birmingham or in the Southwest. 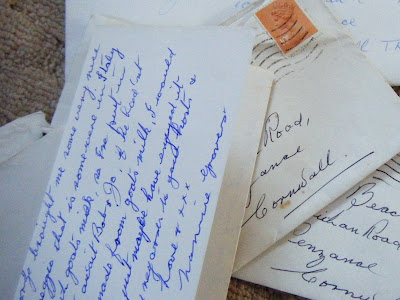 Nanny wasn't mad and bad and dangerous to know, she was more a case of 'naughty but nice' and would write to us several times a month to keep in touch, but was just as attentive to her other grandchildren who were closer to hand. All of us grandchildren, near and far, liked getting our hands on, or rather in, her biscuit tin - and her lemon meringue pie was legendary.
None of us ever really got to know our grandfather, only the smell of his pipe tobacco - he and Nanny were divorced - but I think she was just so much larger than life for us grandchildren that there was simply no space left to fill! She can't have had much money, because she'd been a cleaner but she always managed to save up to give us grandchildren presents - putting pennies in a big pot. This must have been a pretty effective system because one year she had even put enough money aside to take my brother and I on a helicopter day-trip to the Isles of Scilly. Quite a feat for an old-aged pensioner who'd never left the country, let alone flown!
However, the best bits about her were never really associated with big events - I don't think we ever really saw her in any big social gatherings (apart from her funeral, which seemed such a strange state of affairs all around). She would dance seated in her big armchair, singing to The Fiddler on the Roof - If I were a rich man. We'd beg her to do it each time and she'd usally oblige. Here's a clip of it to refresh memories...

http://www.youtube.com/watch?v=jJ_-CmwHWPo&feature=related
Another favourite song was the theme song to Skippy the Bush Kangaroo, but try as we might we couldn't get her to jump around like Skippy for our entertainment although she probably would have done had she been younger! A few years ago I actually had the chance to visit the park in Australia which seemed to be a totally surreal experience, having seen it so many times from a very modest Birmingham terraced house, so long before. So, here's the theme music....

http://www.youtube.com/watch?v=_agtNKbgSfI&feature=related
Another theme tune that just seems to conjure her up straight away was that of Crossroads - we weren't allowed to watch ITV at home - so secretly we children would listen in on it from time to time just to get a dose.
And now for that unforgettable music!

http://www.youtube.com/watch?v=M2zSWQfEsjY
Although she has been absent from our lives for so long now - for far more years than those we spent with her - she still seems so real. I just wish my children had met her - they would have loved her! I also wish I had known more about her life, and life in general in the 'olden days' which for a child generally ncluded anytime before the present! The photo above shows her as a mischievious Edwardian child with a group from the Birmingham Naturalist Group (hence the butterfly nets and floral chains), however I don't know anymore about that, or so many other things from her life. 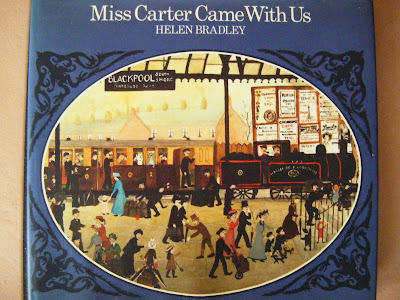 I remember she did enjoy looking at this particular book that I had received as a child for the Christmas of 1973 as it reminded her of childhood in a big city in the first part of the century. The book in question was Miss Carter Came With Us by Helen Bradley, and it was in fact one of several produced by the Lancastrian grandmother precisely to show the youngest members of her family what an Edwardian childhood had been like in the industrial north.

What is truly inspirational, is that Helen Bradley started to paint aged 65, in a style a little like that of Lowry, with his matchstick men, cats and dogs.
Many of her landscapes went far beyond the more naïve approach of her human representations and were very atmospheric. Not surprisingly, her books and paintings were a great success and leave a touching, beautiful trace of the past.
As corny as it may sound, the role of a grandparent is so important - we spend such a short time with these special relatives who hold a position in our lives unlike any other and who occupy such a huge place in our sentiments.
Posted by Beach-Combing Magpie at Sunday, January 16, 2011