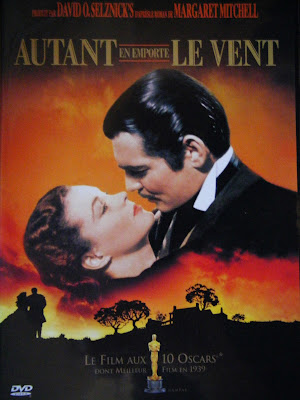 At the end of the summer we watched Gone with the Wind because it's such a cult film, ideal for an autumn evening and in addition I know a little person who seems to have certain aspects of Scarlet O'Hara in her character! All those little carefully studied expressions, crafty, beguiling mannerisms, calculated manoeuvres and cunning feminine ploys to obtain the desired effect!
I had forgotten just how feisty and determined the heroine is, driven by her survival instinct. How original she must have seemed at that time - 1939, in fact. This makes Gone with The Wind a contemporary of Disney's masterpiece Snow White (1937) - however while that film's eponymous heroine is the sugar-sweet character many little girls aspire to resemble - Scarlet herself is almost like an anti-heroine in some respects or at least she rejects and explodes the mould of the dainty, self-effacing 'little lady'. Rather like the film itself - the details of Scarlet's behaviour seem a bit clunky at times - how could she possibly devote so much time and energy to Ashley Wilkes? However the whole carries a character and message that time hasn't tarnished or weakened. On the contrary, Scarlet seems to explode off the screen all the more since she seems so much more original, 3-dimensional and beautiful than many of the insipid heroines we have seen over the years since Gone with the Wind bust the box office sales all those years ago....

I had also forgotten how vivid and vibrant were the colours of the film itself.  All the drama of the Old South and the Civil War are reflected and magnified by dense, richly-coloured over-the-top sets that are all enhanced, of course, by the beauty of Vivien Leigh's Scarlet and her larger-than-life persona and ....Her costumes! 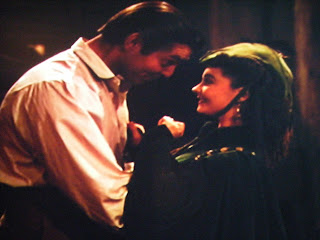 Who wouldn't be won over by Scarlet in her array of beautiful gowns and dresses that, like their wearer, seem so stunning and exaggerated that they appear to be tongue-in-cheek? This is offset by the chemistry of Scarlet and Rhett, the latter being perfectly able to see through Scarlet's moves and manoeuvres, but drawn to her both despite this and because of this.
Maybe this dual effect reaches its height in the jail scene where Scarlet schemes to seduce Rhett, attain his submission and gain his financial assistance in order to reach her objective.

To do so, Scarlet wears that dress - the green 'portières' gown rustled up using the heroine's ingenuity, Mammy's marked sewing skills and Scarlet's mother's old faded curtains in times of severe deprivation.
The drapery dress does its work on every level, as does Scarlet with her perfectly apparent duality of caring companion/scheming minx. Like Scarlet herself, the trimmings from her dress, with tassles and brocade so visibly borrowed from the original curtains yet used to such effect create a fascinating and irresistible whole.
Apparently the costume itself was very heavy to wear (a third of Vivien Leigh's body weight) due to its double velveteen skirts and is today a museum piece in a rather sorry state. The colour of the dress was carefully chosen to suit that of Vivien's eyes and to meet the specific needs of filming in glorious technicolour.
Indeed, it was 'Glorious Technicolour' that produced the rich, vivid colours in what was called the 3-Strip process - which was so rigorous that it required a colour supervisor to oversee the filming and ensure that the costumes, materials and sets met the requirements. The equipment needed to carry out the filming was not owned by the studio itself, but was hired out by Technicolour Co - the machinery being very noisy and incredibly heavy. David Selznick apparently used Technicolour's entire stock to film Gone with The Wind... 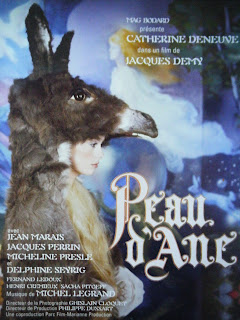 The resulting colours remind me of another film that I love, namely The Wizard of Oz which also dates back to 1939 and then Peau d'Ane (1970) by Jacques Demy, starring Catherine Deneuve in a selection of resplendent fairy-tale gowns in breath-taking, yet camp sets!

While I was won over by the duality and bitter-sweet quality of Scarlet/Vivien, my daughter wasn't entirely impressed....and thought she wasn't "very nice" - unlike Snow White and Dorothy!
Posted by Beach-Combing Magpie at Sunday, October 10, 2010