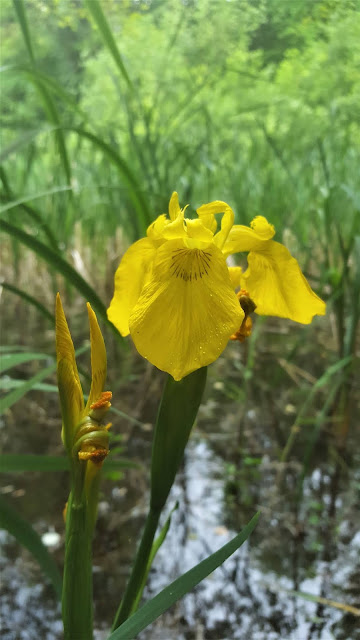 At the beginning of the year, I noticed a small newspaper article referring to the collapse of a Grand Reims project to create a new 'four-star' camp site in woodland between the city and the nearby town of Saint-Brice-Courcelles. 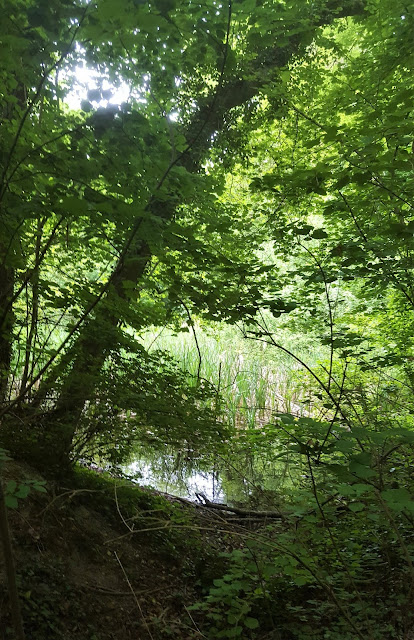 Whilst that piece of news did not particularly attract my attention, the mention of the ruins of a chateau certainly did... 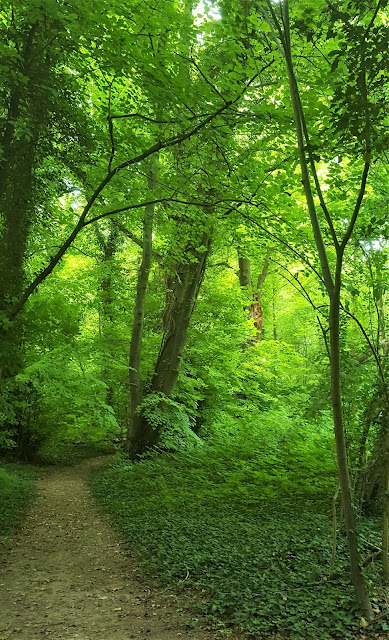 This seemed to confirm the existence of something that I had always dreamt of as I used to go rowing along the canal Aisne-Marne.... 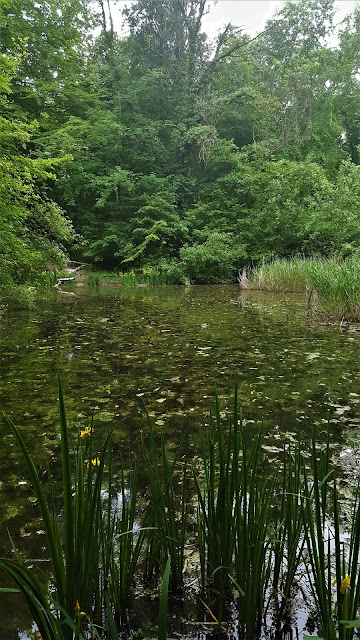 Surely beyond the long stretch of majestic trees, and the ugly steelwork premises there must once have been the majestic grounds of some grand chateau? 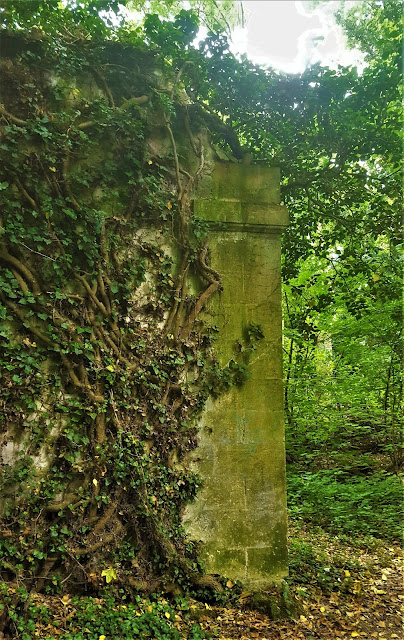 One long section of the canal seemed so magical to glide along, whatever the season, and I used to love allowing my imagination to drift into a make-believe countryside... 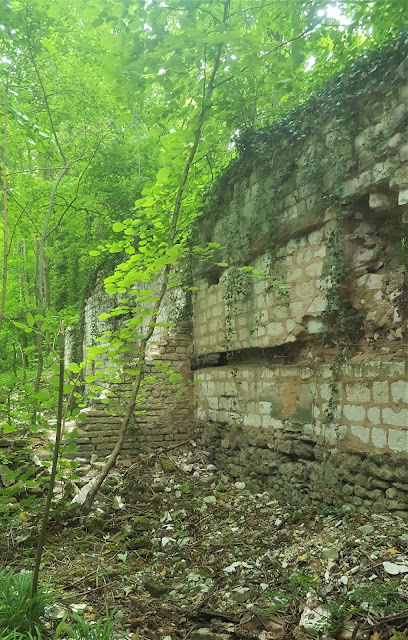 That other world was based on vague memories I had of the French novel Le Grand Meaulnes written by Alain-Fournier in 1913.
This was one of the first novels that I read in French and the memory of the magic of the language used to create the mood of the places and period evoked in the book is still so powerful today. 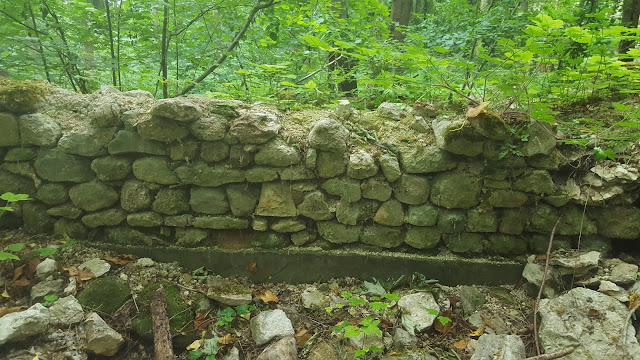 However, the past - whether in literary representation, personal reverie or actual reality - truly is another country. We believe ourselves able to revisit aspects of a past, but can never relive or even recapture those same impressions. 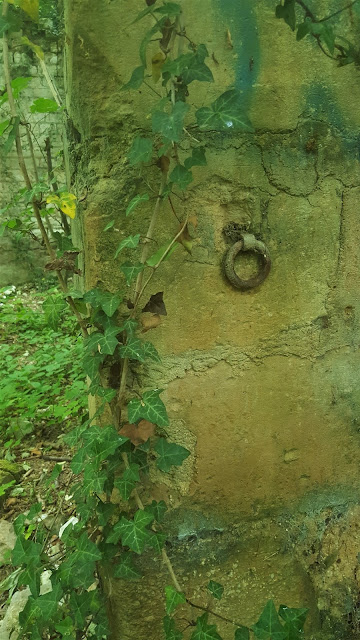 Whatever we count on as vehicles to transport us back to an elusive past of heightened sensations and emotions often becomes a strangely empty vessel. 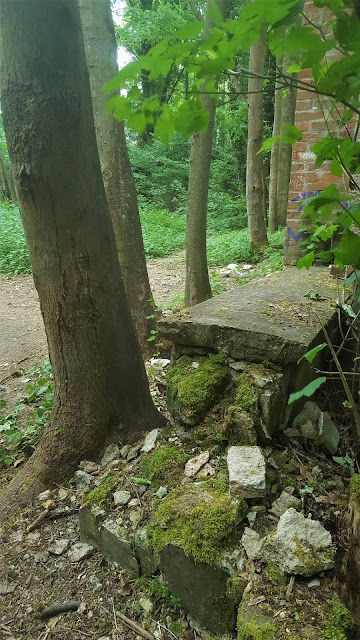 We find ourselves stranded in a temporal no-man's land, incapable of regaining the past and unwilling to remain entirely in the present. 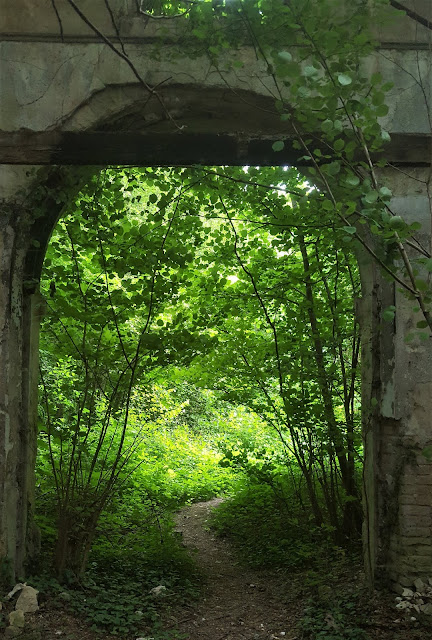 When I tried to reread the novel years later, I felt disappointed that I could not find those same feelings. 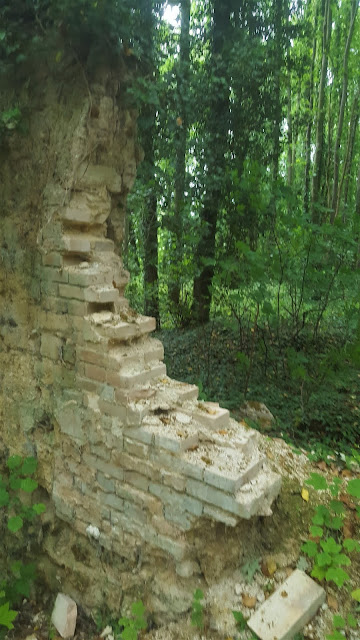 I experienced a strange frustration as I searched, almost frantically, for the passages of the book that had seemed so special then and would thus act as passageways to reach that other realm, from twenty or thirty years before. 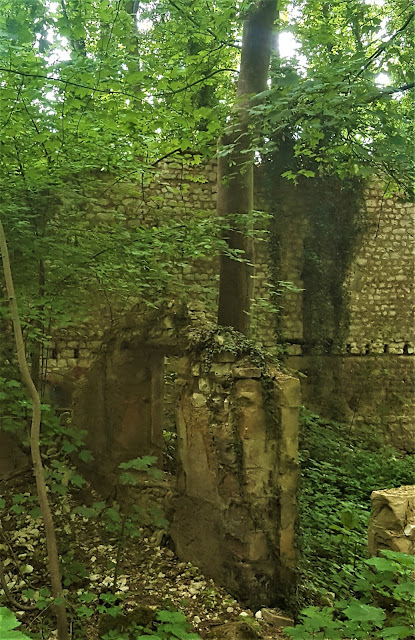 Perhaps this was the equivalent of meeting hard, unyielding wood at the back of  a wardrobe instead of the entrance to Narnia, or experiencing queasiness from a surfeit of Madeleines without the slightest reliving of past times. 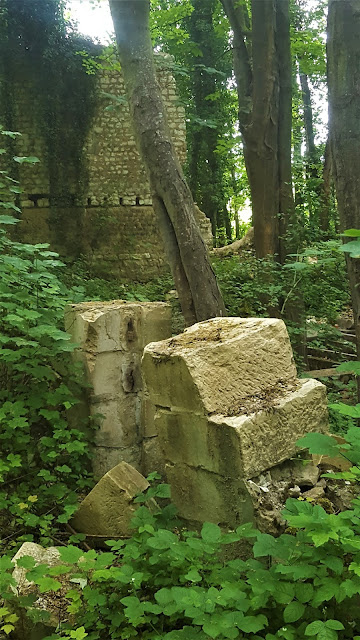 As it is, the memory of the magic remained intact, even if the original enchantment had lost its force. 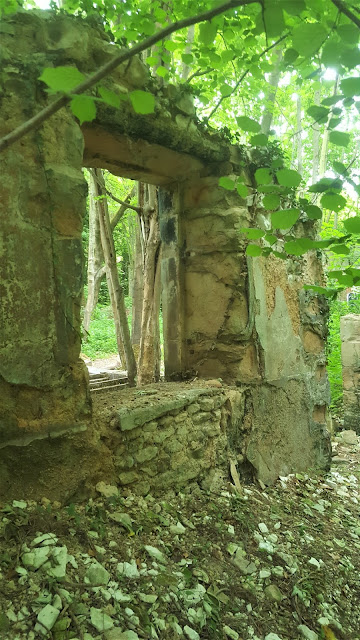 Here in the woodland, the prospective of what lay beyond the green, meandering paths and past the towering trees was tantalizing; all were once part of Le Parc de la Malle. 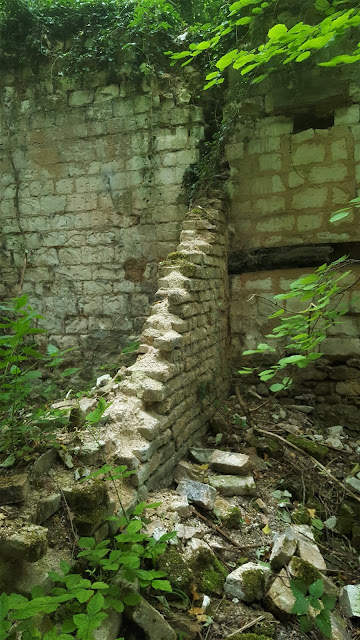 Leafy tracks lead towards a former ornamental pond, overun today with elegant yellow flags and reeds and over-populated by an impressive collection of frogs and utterly voracious mosquitoes! 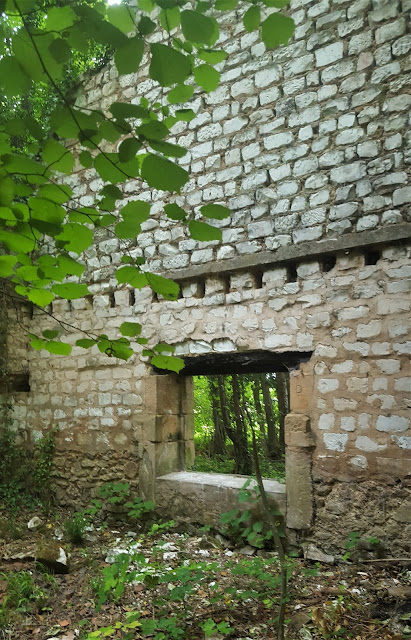 There is not much information available on the chateau that once stood in the grounds, but what remains of the buildings seems to reflect certain aspects of its history. 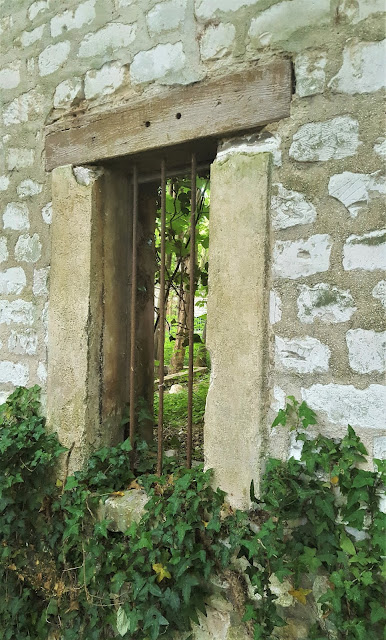 The 19th century ruins of the Château de la Malle that are visible today were partly constructed on the foundations of a far-older building, dating back to the 16th century. 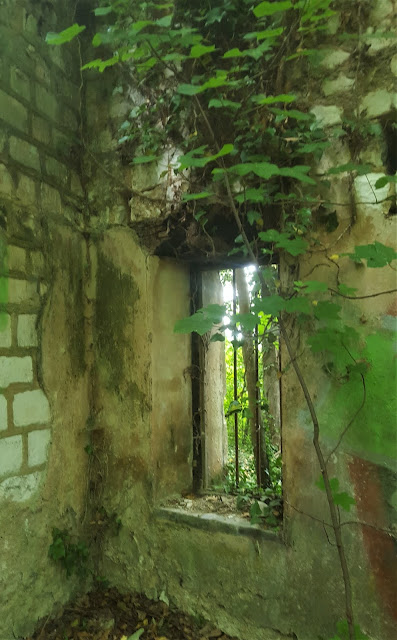 Some of the walls standing today, indeed seem in contrast with the more modern brick-built aspect of certain parts of the edifice. 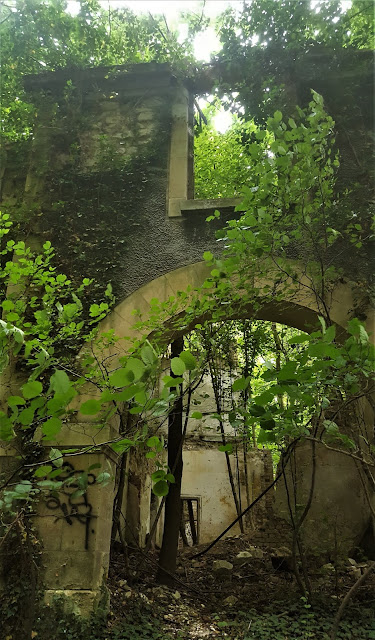 The chateau survived until 1970, when it was apparently ravaged by a fire, which seems such an unworthy end to a building that had lived through the ravages of both WW1 and WW2. 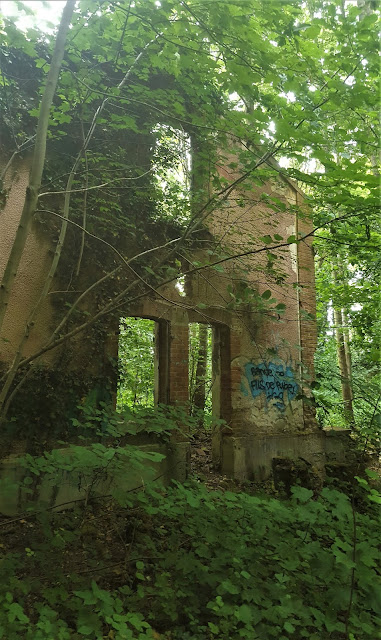 Before the French Revolution, le château de la Malle was inhabited by an alderman of Reims, who had been ennobled by the king in 1765 and would have required a home to reflect his grand status. 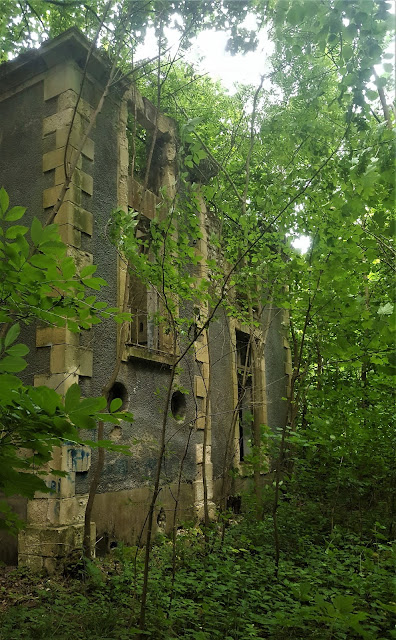 Towards the end of the 18th century, it passed into the hands of the first mayor of the commune of Saint-Brice-Courcelles, and over the following decades was likewise occupied by councillors and dignitaries of the city of Reims alike. 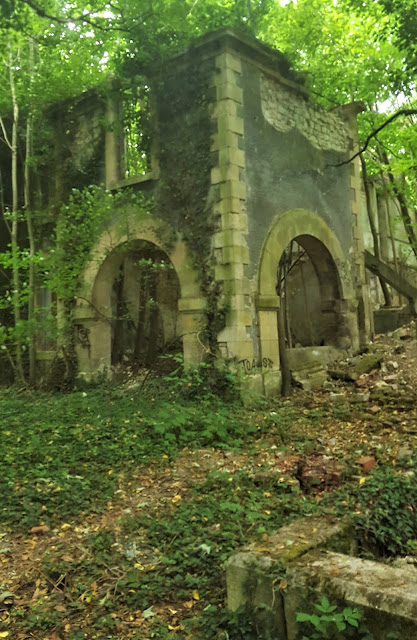 The architect Eugène Clicquot lived in the chateau until his death in 1885, and then it entered into the possession of the family of Baron Henry Berge (1828-1926), with the Comte Xavier de Vaugiraud (1897-1985) as its final owner. 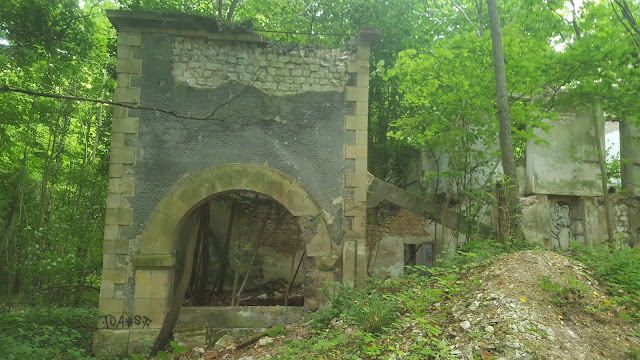 Although apparently suffering heavy structural damage during the Great War, the buildings were restored, unlike many other great properties of the region - notably the Château de Toussicourt. 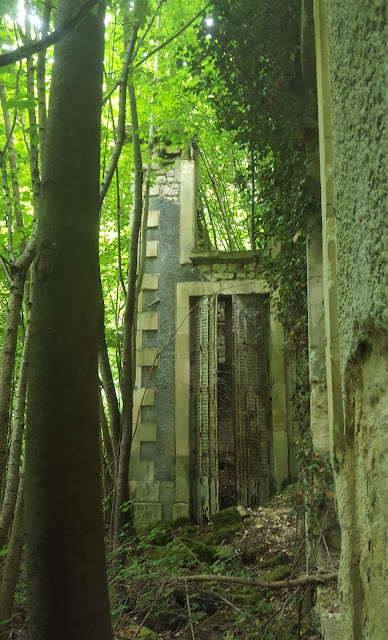 During the last part of the Second World War, the chateau was a station for civil engineers, working for the armistice army for the Pétain-Laval government. A resistance group was said to have been formed amongst the men and once alerted, the Gestapo duly carried out interrogations. 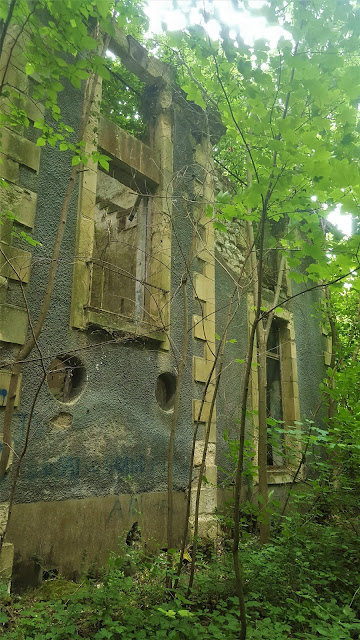 This ugly event has been lost, hidden under the passage of time, literally covered over by rampant overgrowth like much of the history of this place. 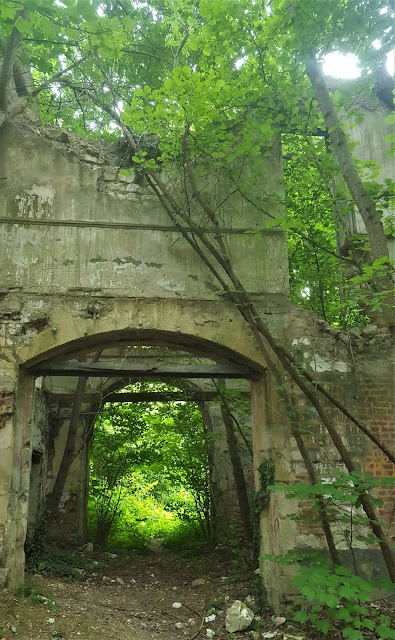 Judging by the graffiti, debris of bonfires and the widespread detritus from picnics and parties, the majority of visitors today are more intent on using the site as a backcloth to their recreational activities in the present moment than considering its past.
Its fate is certainly in strict contrast to that of the 17th century edifice that is less than a kilometre away; the Château de Courcelles. This thrives today as a luxury hotel and restaurant...
The camp site project, which had apparently been on the table for many years, has now been scuppered once and for all. I am not sure if that should be seen as positive or negative, however, the site has deteriorated considerably over the past decade, as can be seen by the photo above....

With or without the project, the Château de la Malle will soon be lost forever. 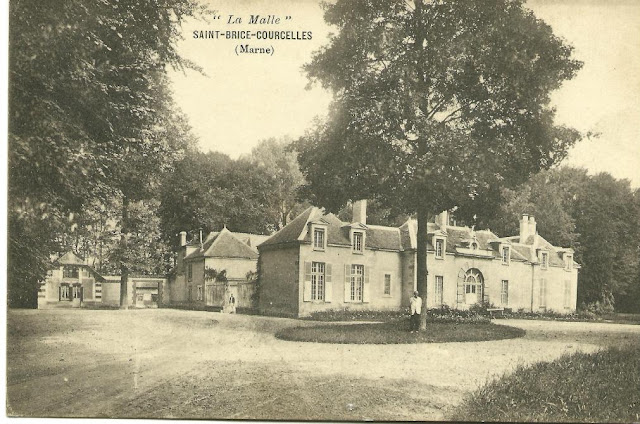