In Harmony with Insects - Anima (ex)Musica... 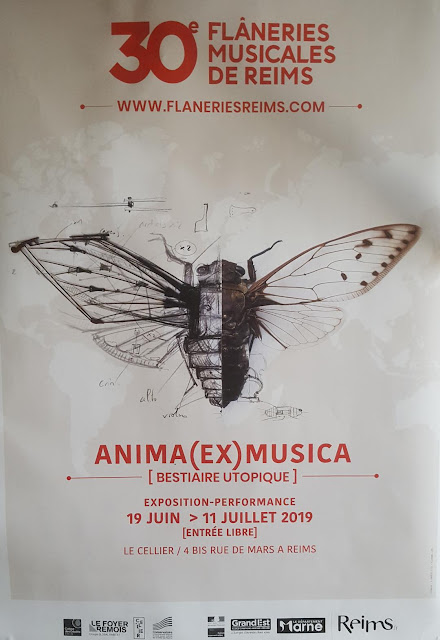 This summer I was curious to see what an exhibition of arthopods in a ‘utopic bestiary’ would entail. Insects, arachnids, myriapods (and crustaceans) belong to this phylum and several imaginary specimens were on display for a few weeks to coincide with the annual classical music festival – Les Flâneries Musicales. Indeed, to celebrate the 30th year of the Flâneries were some of the most cunning creepy-crawly creations ever seen! These were beasts composed solely of the parts of old discarded musical instruments which had undergone the strangest metamorphosis in shape and substance. 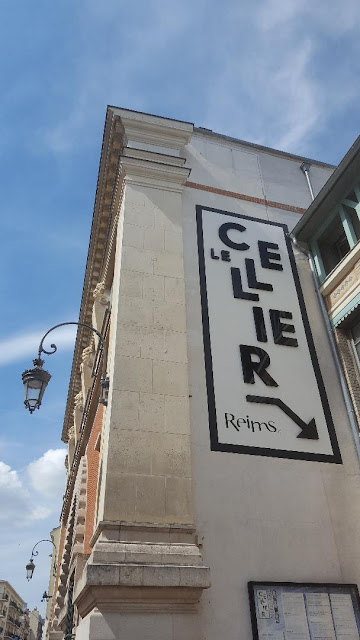 Here was a collection of creatures which blurred the boundaries between the worlds of entomology, the plastic arts and music as they moved their long, spindly jointed limbs to produce curious clicking noises as they stretched, undulated, pivoted and shuffled. The most animated and striking of these were eerily displayed in a darkened room, with light projected onto the forms of these breath-taking protagonists. 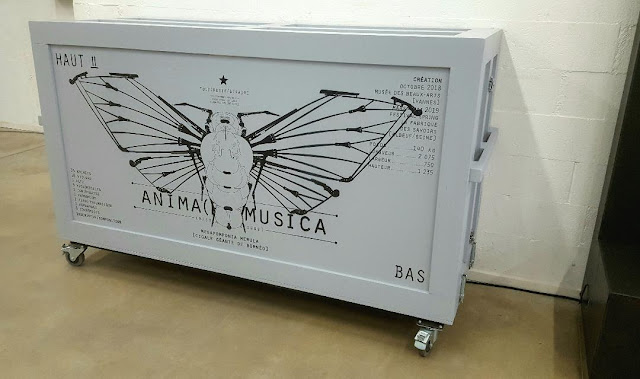 Large transportation crates were also on show, just as if these were exotic, rather dangerous show animals. Inscribed alongside their images were not only the physical  precisions  – width, height, length and weight -  but also lists of the musical instruments that had been used to give body to these unusual beasts. 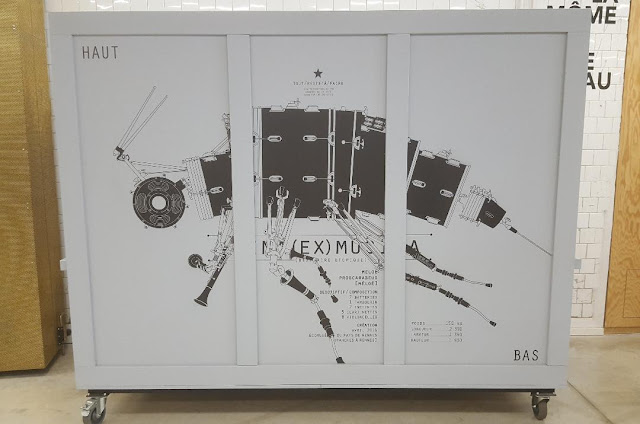 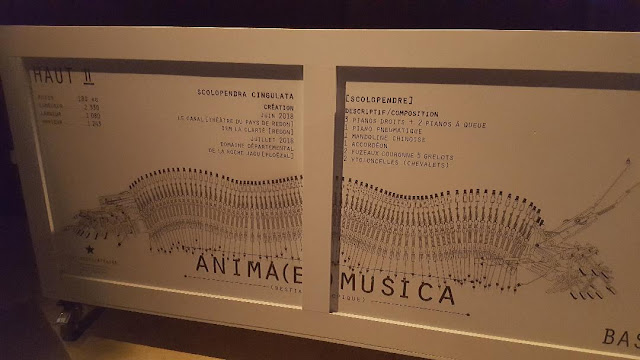 Presented on their impressive, sizeable stands were a tropical centipede, giant cigale, Colorado beetle, stag beetle, oil beetle, bug, woodlouse, spider and grasshopper - all given the collective name of Anima(ex)Musica. These are all fascinating representations of the animal kingdom on a very imposing scale but become all the more intriguing as you try to identify the difference components. 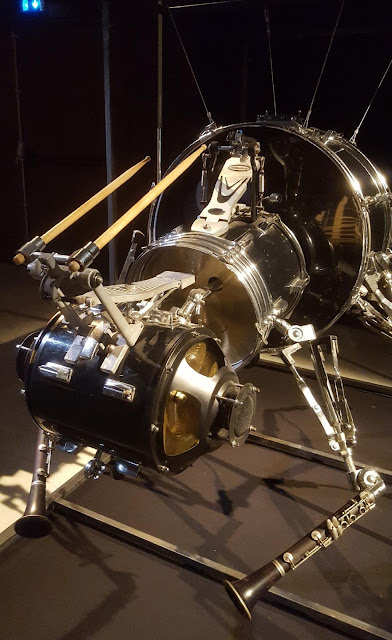 Suffice it to say, this exhibition would probably not attract many arachnophobics or indeed anyone with a pathological fear of insects – termed entomophobia. Most people seem to have an instinctive dread of any encounter with a wasp or, to a lesser degree, bees, and their response is generally rather excessive, largely inappropriate and wholly ineffectual. How many times do you risk getting stung due to the dramatic swatting and batting of some third party whose actions only goad the hitherto inoffensive creature to exact revenge on the nearest flesh? 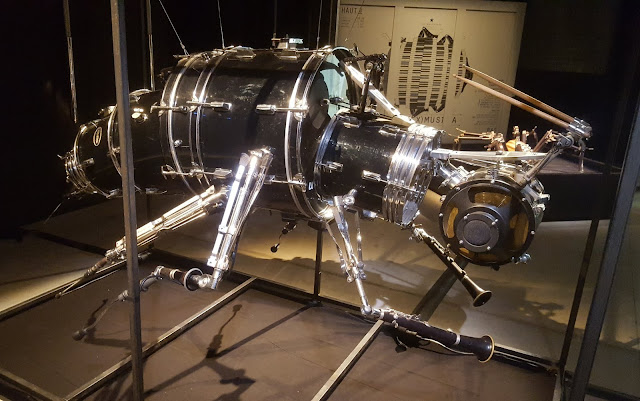 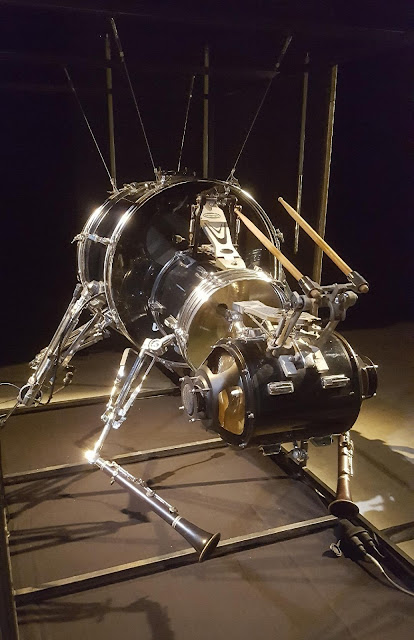 The artists behind the creation of these insect exhibits are perhaps not entomophiles per se, but they certainly understand the importance of these tiny giants. The phylum Arthropoda, is the largest in the animal kingdom with arthropods alone representing 80% of living creatures. Nevertheless, they are generally much maligned and largely misunderstood. The trio of creators – collectively known as Tout reste à faire – have endeavoured to take us into a realm that is usually overlooked since the actors in this theatre are literally too small to scrutinize and are considered to be of little true worth. And yet it was Einstein himself who is said to have warned us that should bees be eliminated from our planet, Mankind would soon perish… 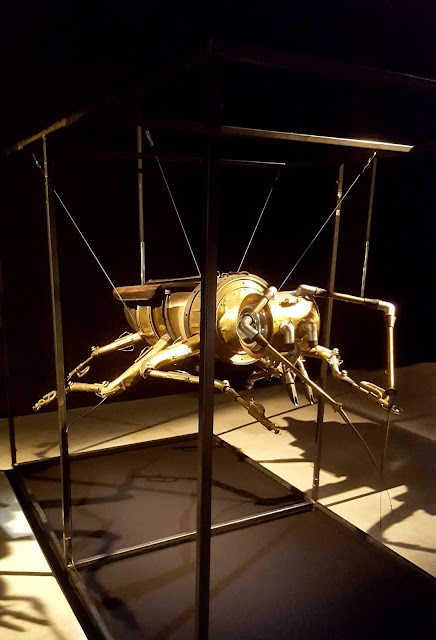 Over five years, Vincent Gadras, Mathieu Desailly and David Chalmain have studied entomological anatomy in order to « make visible the invisible », using the anatomical parts of old musical instruments that are likewise, little known and rarely held up for observation. How often are we able to study the intricate mecanisms and intimate mechanical parts of the instruments that generate the music that surrounds us? Furthermore, this musical recycling also enables the arthropods to find a voice – literally – as they emit strange noises when exposed to the steady flow of exhibition visitors. 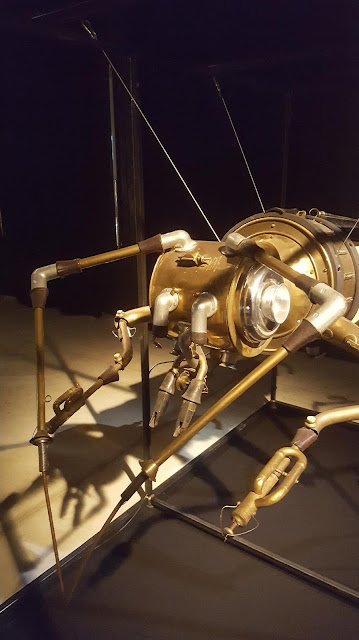 The fact that the artistic creators requested the general public to donate their unused and unusable musical instruments by depositing them at the Conservatory of Music in Reims also generated a certain by-word-of mouth ‘buzz’ (sorry !). Finally, Tout reste à faire make clear the aim of this project: to halt the elimination of these tiny creatures that play such a huge role in the eco-system. 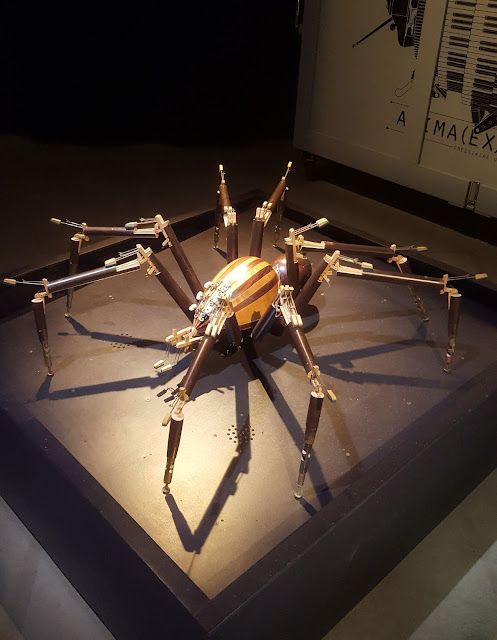 Sadly, I have to admit that there are a handful of creatures that I would like to see a little less of in the small universe of my flat and balcony. Insects, bugs and butterflies have come and gone over the months here, but in view of the tattered state of the leaves of the potted plants on my balcony, I feel sure that the vine weevils – beastly black beetles - are still actively feeding on my potted plants during their nocturnal raids, emerging at dusk to reap havoc on foliage and flowers. These resiliant creatures are now simply biding their time, lurking under leaves, fattening themselves up for a egg-laying blitz as they burrow under ground. Once this preparation has taken place, the harm will occur far below the soil surface during the overwintering stage as emerging larvae promptly set about gnawing and boring away at the root systems of my long-suffering greenery until ready to emerge as fully-formed evil weevils next Spring. 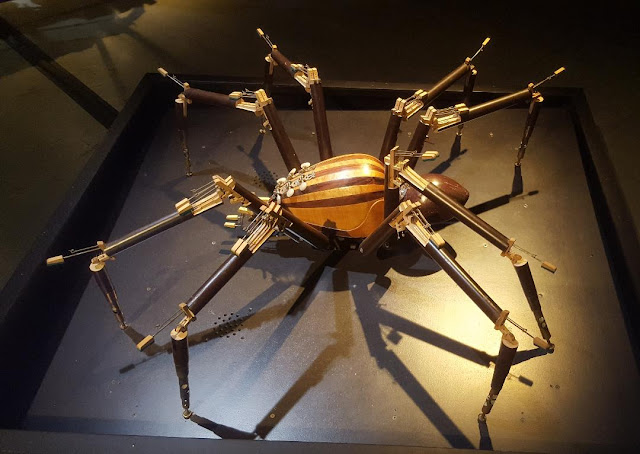 An incredibly resistent being, the weevil must be one of the ultimate banes to any gardener since this uninvited guest is unlikely to abandon its host environment, even with the greatest encouragement to do so. They must surely be an example of evolutionary perfection – fit to thrive – and their ultimate sign of defiance is the fact that the female does not need a male to reproduce and can lay hundreds of eggs in one session… 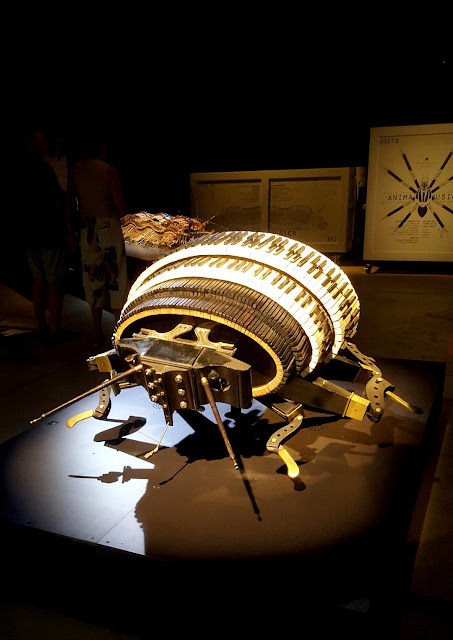 Beetles and bugs are often confused for one another – or are simply referred to as creepy-crawlies and then grouped with spiders, wasps and itchy things as globally-acknowledged unpleasant pests. However, there are distinct dfferences between the two. Bugs, from the Hemiptera order, have sucking mouthparts with piercing ‘stylets’ to feed on sap or nectar. They also have membrane wings, and undergo incomplete metamorphosis to reach their adult phase. 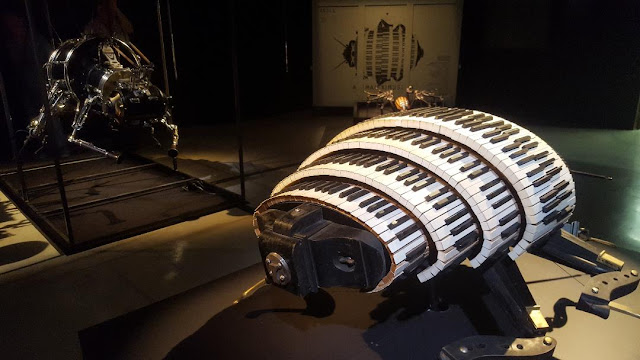 Beetles, of the order Coleoptera, have three distinct body regions – head, thorax and abdomen – in common with all insects, yet these are not necessarily visible when observing from the beetle from above. Transforming from the larval stage to adulthood, the beetle has a complete metamorphosis yet the constant feature throughout each step of their lifecycle appears to be their formidible appetite, aided by munching mouthparts. Powerful mandibles allow the beetle to devour plant or animal substances, as l have learnt from experience and considerable expense. The vine weevil has a strange ‘snout’ arrangement, but that does not make it any more endearing, I have to say. 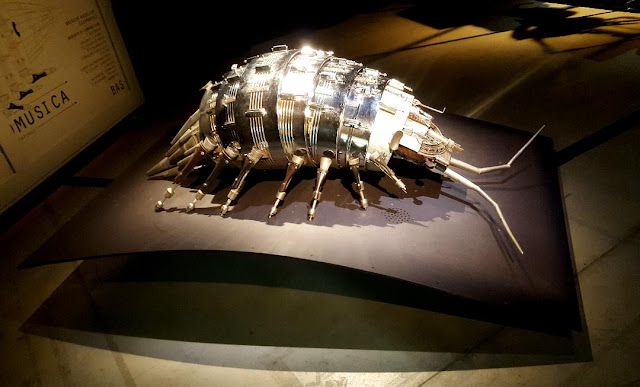 Meanwhile the other beetle type in this household - the carpet variety – is equally maligned due to the voracious feeding of its larvae – commonly referred to as the ‘woolly bear’. Very little to find cute or attaching in this specimen either – especially once it has pock-marked clothes or any article of animal origin (feather/fur/felt/hair etc), having grown tired of its staple diet; dander. 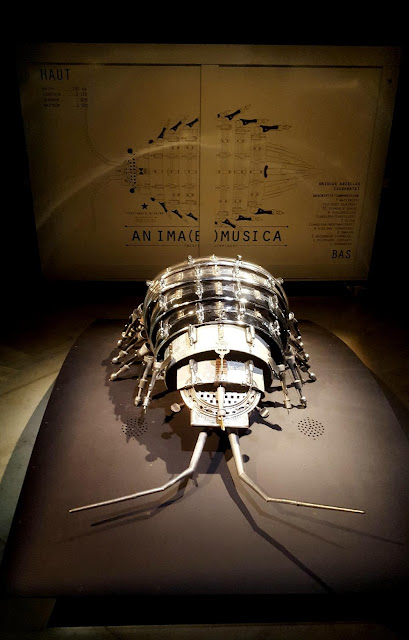 In common with most adult beetles, the carpet beetle has elytra – hardened forewings that form a shield to cover the membranous hindwings when not used for flight. As the remarkably small adult beetle flies innocently about your home space, it is initially hard to associate this will the greedy grubs that cause criminal damage in the dark recesses of your wardrobe. Just like the vine weevil in your garden, the carpet beetle is devilishly hard to part company with, once it has taken residence in your home and the liquidation of larvae and the bashing of beetles will take up a considerable amount of your time in. All is fair in war, I have no qualms here and take no prisoners. 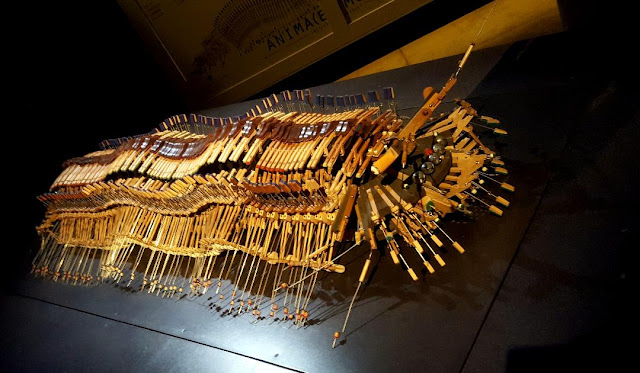 It seems unjust that spiders should get such a bad press when they do very little damage, destroy insect pests, and spin amazingly beautiful, intricate webs. I had a close encounter with another type of weevil earlier this month – in a Goldilocks moment. « Who has been eating all my porridge ? ». In fact, the offenders were almost eaten by my good self as I mistook the small dark forms in my rolled oats for Chia seeds – until I noticed how they were crawling about my cereal bowl. I resolved there and then to wear glasses for future breakfast preparations! 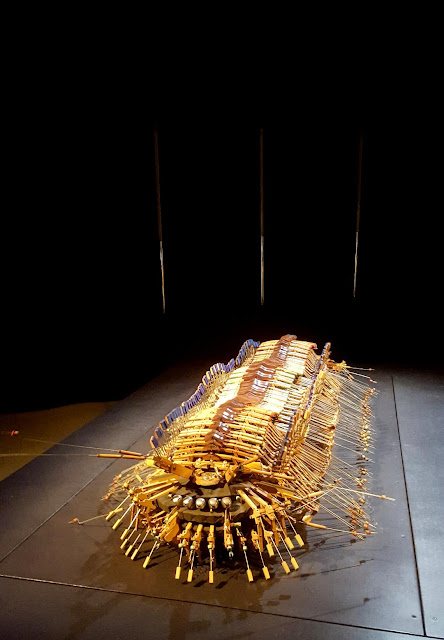 Living on the fifth floor, we rarely have any truly exotic visitors, winged or otherwise, however there are a few exceptional moments. Few and far between, these visits are of great interest and entertainment to the cats. 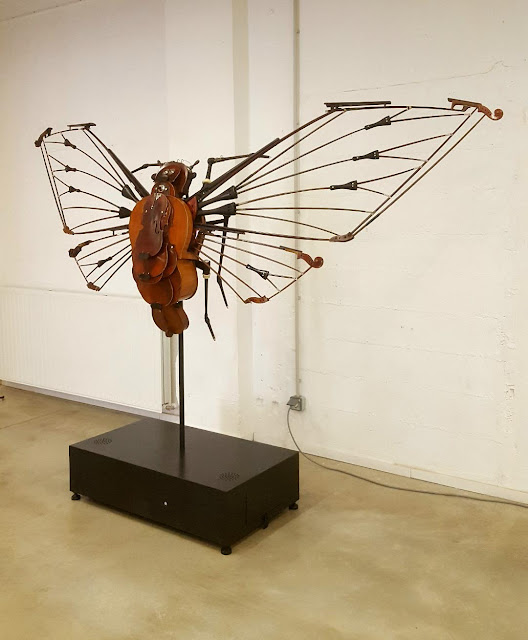 This summer, the arrival of a sizeable grasshopper on the window  was therefore met with astonishment and a certain amount of feline frustration since the beast in question was on the ‘wrong’ side of the glass, and no amount of scratching would deliver it to eager paws and jaws. 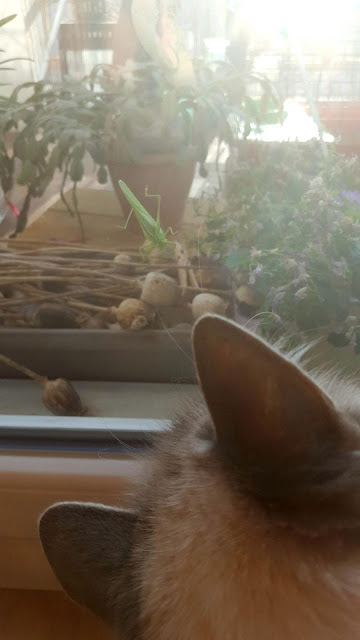 Things took another dimension however that same night, when the grasshopper made its way into the flat and was leaping and flying around the confined space, with both cats in hot pursuit. This was definitely one of the highlights of the cats’ summer and yes, the grasshopper did live to tell the tale as we managed to guide it back out onto the balcony. 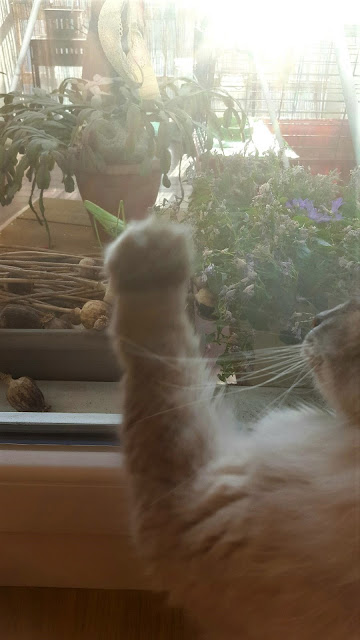