Bagpuss and Co. at the Beaney House of Art and Knowledge...

On a fleeting trip to Canterbury last month, I was looking forward to returning to the Canterbury Heritage Museum, formerly the Museum of Canterbury, set in the 14th-century Poor Priests' Hospital, next to the river Stour, just off the main street in the city. Sadly this wasn’t to be, as it had been closed earlier in the year. I presume this is put down to lack of visitors, much in the same way that public libraries are being shut due to dwindling demand. It would seem that traditional museums and libraries that have not been 'sexed-up', fail to offer services that can compete with digital wizardry.
What child, or indeed adult, would want to tire themselves on dry visual displays – in the form of mere physical books or exhibits, that do not ‘do’ much, other than be what they are? 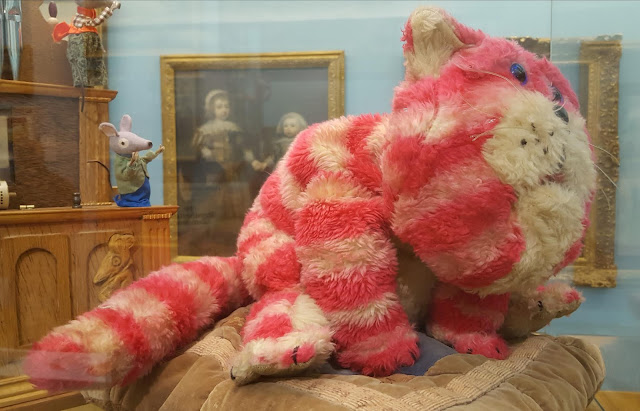 These seem to be perceived as old carcasses of a past world that are simply too demanding – requiring just too much investment on every level. Today, an experience can only be deemed valid if it involves interactive screen activity, to intensify a moment of instant gratification, preferably with the capacity to take shots of the ‘user’ who can then share their seconds of pleasure so that it can be ‘liked’.

With a sensory overload that curiously seems to dullen the very senses it is supposed to heighten, optimal experiences provide an excited buzz of consumption, yet one that must be followed by others, as with any addictive process. Processing a book or glass cabinet display is just too intellectually and physically cumbersome, a slow and solitary affair that refuses to be validated by the instantaneous sharing on some social media. Suffice it to say that I really am saddened by the closure of this musem...

The medieval building itself was/is impressive with its ceilings of exposed beams, under which were displayed artefacts of the history of the city of Canterbury through the ages. Exhibits spanned the millenia, from pre-historic and Roman times, covering the early pilgrimages as Canterbury became the site of the first cathedral in England, right up to the blitz of the Second World War.The city of Canterbury, and the surrounding region has a rich spiritual, political and cultural past, and has produced or harboured several famous ‘sons’, not least the venerated saint and martyr Thomas Becket. Indeed, the great Geoffrey Chaucer – the father of English literature, joins ranks with a motley crew that includes Rupert Bear, Bagpuss, the Clangers and Ivor the Engine.

Adult visitors were able to inspect the study of the Polish-British writer, Joseph Conrad, looking for indicators to his heart of darkness. Visitors of any age could witness the light and warmth liberally radiating out from the display case of Bagpuss - the old saggy cloth cat and his friends – that drew in appreciative gazes all round. I cannot believe that this entire heritage collection – the cultural and social roots of the people of Canterbury – has been dismantled as the building is presumably readapted. But to become what? Another ‘eaterie’, bank, or estate agent?

Nevertheless, as chance would have it, when I visited The Beaney House of Art and Knowledge, I came across Bagpuss and many of the other characters who were so central to a pre-80s childhood in the U.K. Collectively, these were the brainchildren of the creative duo, Oliver Postgate and Peter Firmin and were the half-siblings of the mischievious glove puppet, Basil Brush, whom Firmin had designed in the 1960s.

Setting up their company Smallfilms in a converted barn in rural Kent, Postgate and Firmin, filmed the activities of their characters. These generally relied on stop motion animation, interspersed with illustrations, accompanied by song and more importantly the ‘vocals’ of the characters themselves, with Postgate narrating. No one could forget the unique communication of the strange mouse-like creatures, the Clangers and the Soup Dragon, carefully reproducing actual dialogue through a Swanee whistle. Nor could they fail to be marked by the wistful, solemn yet reassuring speech of Postgate who opened each episode of the programmes.

His reflections on a world opening up to exploration and experimentation that had previously been inconceivable, led a generation of children into the Space age…and colour television! With a rich language that finds no comparison in the dumbed-down, hyped-up ravings of many children’s programmes today, youngsters were encouraged to muse over the meaning of Outer Space and that of our own planet, Earth."Of all the stars and moons and planets that shine in the sky, by far the most troublesome is surely this one?”.
In fact, Clangers was born in the late 60s as an off-shoot from the Noggin the Nog stories, where a Moon Mouse made its debut. Asked by the BBC to produce a storyline set in Space, Firmin came up with the collection of pink knitted mice, made by his wife. Seeing them ‘in the flesh’ at the Beaney in Canterbury was a strange experience as they seem so humble and down-to-earth, in every sense of the term!. But then, that was the true magic of Smallfilms ; small steps in material creativity – a collection of home-made antrophomorphic props - to encourage giant leaps in the collective imagination and curiosity of a whole generation of children. To combat lives that had become "complex and convenient" in the words of the opening to Clangers, Postgate and Firmin proposed a creative world that was both simple yet demanding, since it inspired thought and wonder. Not surprisingly, children were initially dumbstruck as they listened intently to the mesmerizing tones of the narration, but were never rendered dumb and passive in the process.The same distinctive aspects pervade all the Smallfilm productions, and yet all the characters were unique and wholly original, whether they inhabited Space, the Lands of the North, the Welsh valleys or simply the woods, like The Pogles. 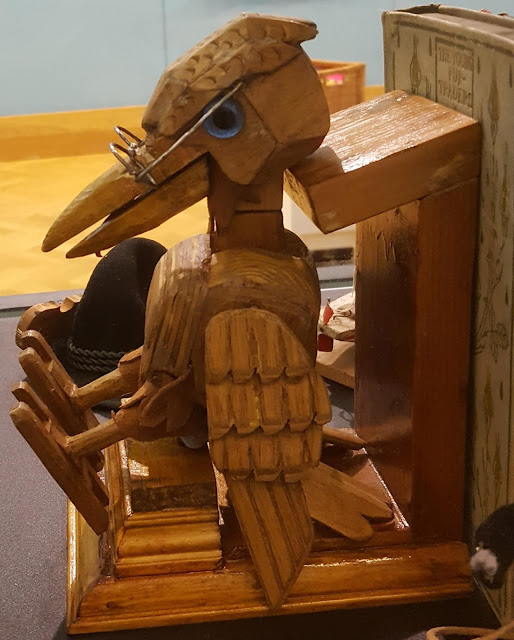 Just as the physical characters and sets were made of a jumble of recycled objects – the very principle of Emily’s shop in Bagpuss – the inspiration was gleaned from a variety of sources. Ivor the Engine drew partly on the melodic, melancholic tones of Under Milk Wood, by Dylan Thomas, whilst the characters of Noggin the Nog (late 50s), with their ‘telling of tales’, were based on the Lewis chessman at the British Museum. Of course, in comparison with the glossy, seamless, high-definition CGI work of today, the Smallfilms productions look rather thread-bare and "a bit loose at the seams", like Bagpuss himself. Nesting swallows would leave droppings on the Clangers’planet set located in the barn film studio, and marauding mice were known to nibble at the knitted characters such as the poor old Soup Dragon! But all this was a different, rather more innocent era, of invention and improvisation, yet a period that was oddly richer in many ways. Even Bagpuss, with its 13 episodes, voted the most popular BBC childrens’ programmes ever made in 1999, had an original start in the early 70s. When the marmalade-coloured tom came back from the manufacturer’s in a very unusual pink hue with cream stripes, Firmin declared that there were not enough pink cats on television screens!. Thus Bagpuss made his entry in a glorious strawberry ginger tone.

Oliver Postgate died in 2008, whilst Peter Firmin died earlier this year. The Clangers series were revived and updated in 2015, with Michael Palin taking on Postgate’s role as narrator. Firmin, acting as design consultant and co-executive producer collaborated on this latest work to ensure that the spirit of Clangers was not smoothed over and sanitised by CGI. A certain charm has therefore been retained, but the magical skill of this creative partnership, with its multi-talented artists – mavericks bringing together a range of disciplines – has perhaps been lost. Many of today’s multi-tasking talents are generally one-trick ponies, who are shackled by political correctness, standards agencies and a raft of psychologists, ready to pounce on any piece deemed unfit. I remember being slightly in awe of Postgate’s narrative, that refused to remove the wonder and fear of the unknown depths of Space, no matter how cuddly and amicable the Soup Dragon and Co may have been. I was terrified by the shadow of a witch in my 1971 Christmas Poggles Annual, so much so that I had to turn the page as fast as possible in order not to glimpse her talons projected onto the vaulted ceiling of the cellar. The slowing-down, and fade-to-grey endings of Bagpuss, never failed to make you feel a little sad, as the bright pink cloth cat yawned and settled down to sleep, signalling to his friends that it was time to return to inanimate black and white. Do young children still experience these feelings ? I hope so. 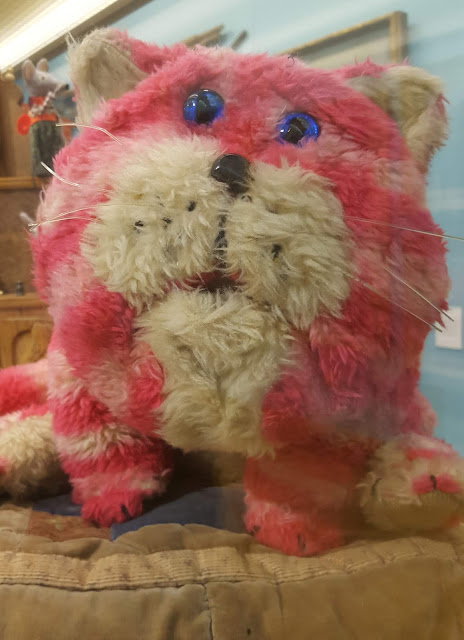 Oliver Postgate wrote his memoir Seeing Things in 2000 – I think this will be my Christmas present to myself.